Architectural Record focuses on the architecture of stadiums, natatoriums, and other sports centers. 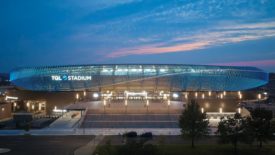 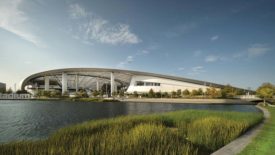 SoFi Stadium and Hollywood Park by HKS with Studio-MLA

Home to the L.A. Rams (and Chargers), the 2022 Super Bowl stadium welcomes fans and the community alike with a porous, park-like scheme. 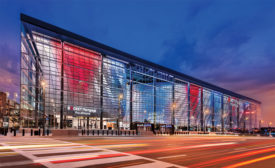 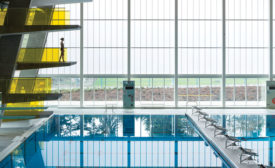 Two striking indoor pools, by Bing Thom and HCMA, use wood in unexpected ways and provide a Vancouver suburb with new landmarks.

No Comments
A diaphanous "stadium light" from the Pritzker Prize-winning firm redefines the soccer experience for fans in southwest France. Herzog & de Meuron's Nouveau Stade de Bordeaux. ﻿﻿ A new soccer stadium designed by Herzog & de Meuron in Bordeaux, France hosted its first game on May 23rd (the FC Girondins vs. Monpelier), a year before one of the sport’s most high-stakes tournaments—Euro 2016, the European Championship and qualifier for the 2017 World Cup—is played there. With 42,000 seats, the 830,000-square-foot stadium is one of the largest in the region, where soccer has a religious following. Drawing on the spiritual hold
Read More

Winning Playbook: HNTB Architecture and STUDIOS Architecture team up to give a 1920s-era stadium at the University of California, Berkeley, a seismic retrofit and expansion that respects its history.
Lamar Anderson
No Comments

Of the many neoclassical buildings that architect John Galen Howard designed for the University of California, Berkeley, in the early twentieth century, California Memorial Stadium was perhaps the most breathtaking and the most imperiled: from its perch at the base of the Berkeley foothills, the concrete structure—part coliseum, part amphitheater dug into the hillside—offered 73,000 Golden Bears fans sweeping views of San Francisco Bay to the west, but on a site straddling the Hayward Fault.

Circuit of The Americas

Formula for Success: Miró Rivera Architects creates a sprawling, zoomy venue for motor sports, music, and more in the capital of the Lone Star state.
Ingrid Spencer
No Comments

Though it isn't quite all tumbleweed and Longhorns on the 20-minute drive from downtown Austin to the Circuit of the Americas (COTA)—the only facility in the United States specifically built to host the Formula 1 Grand Prix auto race—the barren landscape looks and feels like rural Texas.