To fully appreciate the darkness of the works in Houston’s Rothko Chapel, you need to have just the right amount of light. The 14 large-scale panels that American Abstract Expressionist Mark Rothko created for the interfaith sanctuary are subtle, brooding, and evocative. But since the earliest days of their installation in the octagonal brick structure, they haven’t been illuminated to their full advantage. That changed in September, when the chapel reopened after an intensive restoration—part of a multiphase master plan by New York–based Architecture Research Office (ARO) that will allow the public to engage more deeply with the Rothko Chapel organization’s mission to advance art, culture, social justice, and human rights. LED projectors hidden around the chapel’s skylight (above) provide diffuse illumination when it is dark outside. Photo © Elizabeth Felicella, click to enlarge click to enlarge

In 1964, Houston oil magnates, philanthropists, and art patrons John and Dominique de Menil commissioned Rothko to create a meditative sanctuary anchored by a collection of site-specific paintings. Philip Johnson worked on the building until 1967, followed by Houston architects Howard Barnstone and Eugene Aubry, who saw it through to completion in 1971—the year after Rothko’s death. It was added to the National Register of Historic Places in 2001. One block west of the chapel is the Menil Collection, the 1987 Renzo Piano–designed museum that houses the founders’ private art collection. Together, the institutions, located in a residential neighborhood, underscore the Menils’ larger vision: to make art and spirituality part of the everyday. Part solid and part trelliswork, the large cantilevered roof of the steel-frame Welcome House allows visitors to congregate outdoors, protected from the elements, before entering the chapel. Photo © Elizabeth Felicella, click to enlarge

ARO embarked on the $30 million project in 2016, working closely with Nelson Byrd Woltz Landscape Architects and lighting designer George Sexton Associates. The completed master plan will add a large, flexible program center for symposia, receptions, and other events; an archive and administration building; a renovated bungalow for housing speakers, special guests, and scholars in residence; and new public gardens. First to be finished is a visitors center, called the Suzanne Deal Booth Welcome House, which opened in mid-September, and a mechanicals building, or Energy House, that will serve the entire two-acre campus. 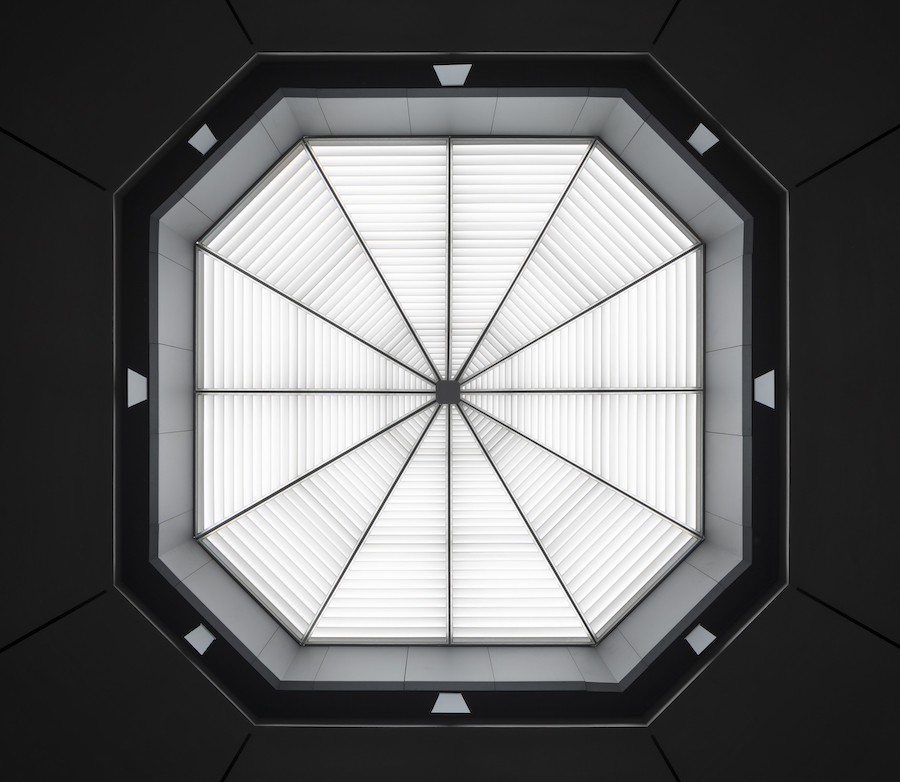 Inside the chapel, looking up at the new skylight. Photo © Elizabeth Felicella

The chapel required significant restoration work, from bringing previously unreinforced concrete block walls up to code, to reconfiguring and updating the foyer. But the most transformational change is the complete replacement of its large central skylight. For six years, Rothko labored over his artworks under a skylight in his New York studio, but, once the pieces were installed in Houston, the intense sun overwhelmed the subtleties of the paintings. Various attempts to moderate the light were made over the years, including, most recently, a bulky baffle that darkened the space more than necessary. In collaboration with ARO, George Sexton’s team devised an entirely new skylight with a system of aluminum louvers that direct daylight toward walls above the paintings. During the night and other low-light conditions, a photocell-controlled LED lighting system provides similarly diffuse light. 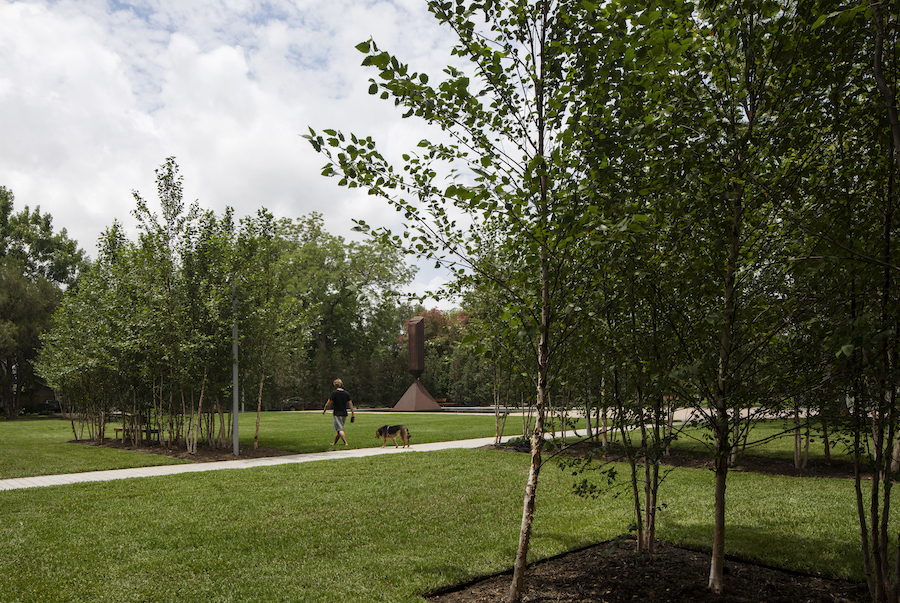 Much of the project focuses on improving transitions throughout the space and grounds. Nelson Byrd Woltz’s landscaping scheme serves to prepare the eyes for entry to or exit from the Chapel by using plantings that decrease in scale and increase in shade cover as they approach the entrance. “What Thomas Woltz has done has lengthened the experience, so that it doesn’t just start the moment you pull open the front door,” says ARO principal Stephen Cassell. To the east of the chapel’s front plaza, several linear stands of river birch trees give visitors a protected space to prepare for, and then reflect on, their experience inside. “This garden might be the place where, moved by what you’ve seen, you have a meditative moment to make your own covenant of what action you will take in the world,” says Woltz. In Phase 2 of the project, a second garden will be located to the west of the plaza. The back of the chapel and, in the distance, Broken Obelisk and the reflecting pool are visible from the porch of the Welcome House. Photo © Elizabeth Felicella

Just north of the chapel, the new visitors center and Energy House aim to “work within the rhythm of the neighborhood and existing houses,” says ARO principal Adam Yarinsky. The single-story, 975-square-foot glass-and-brick Welcome House contains a reception desk, restrooms, and retail; behind it is the mechanicals building, which holds the new HVAC system and emergency generator for the chapel. (In Phase 2, it will be reclad with wood and receive additional air-handlers.) Situated closest to the street, the Welcome House’s scale matches that of the neighborhood’s historic bungalows; Phase 2 buildings (expected to be completed in 2023) include the glass-and-wood program center and the cedar-clad archive and administration building (stained “de Menil gray,” like many of the neighborhood bungalows); they will all match the height of the chapel’s parapet.

Christopher Rothko, the painter’s son, chairs the capital campaign for this project and has served on the Rothko Chapel board for many years. His involvement has given him a new perspective on his late father’s Menil commission. “I used to think it was an exception in his artwork—something that was a little bit different from everything else he did,” he says. “What I’ve come to realize is that it’s the purest expression of what he had always been after—the chance to not just paint a painting, but to create a whole environment and experience for the viewer.” 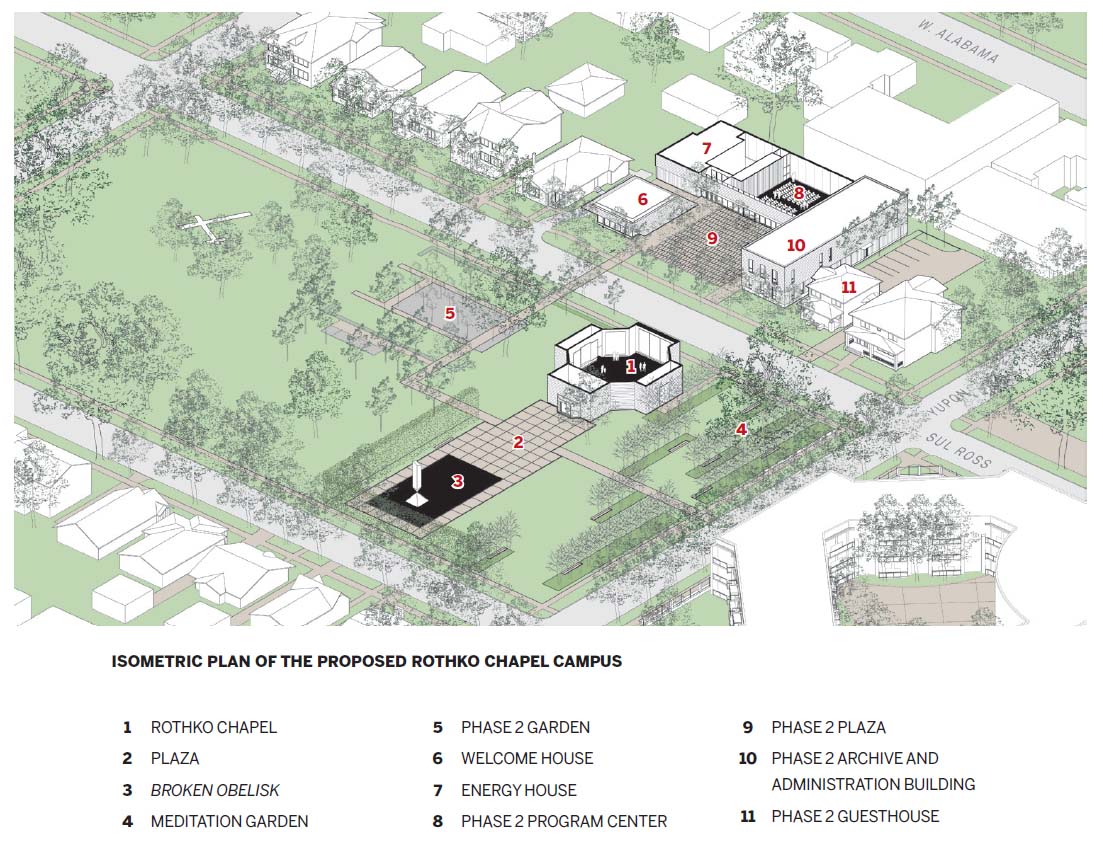