This website requires certain cookies to work and uses other cookies to help you have the best experience. By visiting this website, certain cookies have already been set, which you may delete and block. By closing this message or continuing to use our site, you agree to the use of cookies. Visit our updated privacy and cookie policy to learn more.
Home » Steven Holl’s Luminous Kinder Building at the Museum of Fine Arts, Houston
ProjectsBuildings by TypeMuseums & Arts Center Projects

Although Texas gets more attention for its big, bright stars, the state’s vast blue skies and dynamic clouds are what inspired Steven Holl’s latest project, at the Museum of Fine Arts, Houston (MFAH). Home to the only Mies van der Rohe museum in the U.S., as well as a gallery building by Pritzker Prize–winner Rafael Moneo, the institution’s Susan and Fayez S. Sarofim Campus is at long last complete, with the opening of the Nancy and Rich Kinder Building on November 21. Clad in a vertical array of translucent glass tubes and topped by a complex clerestory roof that brings in diffuse daylight throughout the interior, the nearly 240,000-square-foot structure consolidates the MFAH’s impressive—and growing—permanent collection of modern and contemporary art. 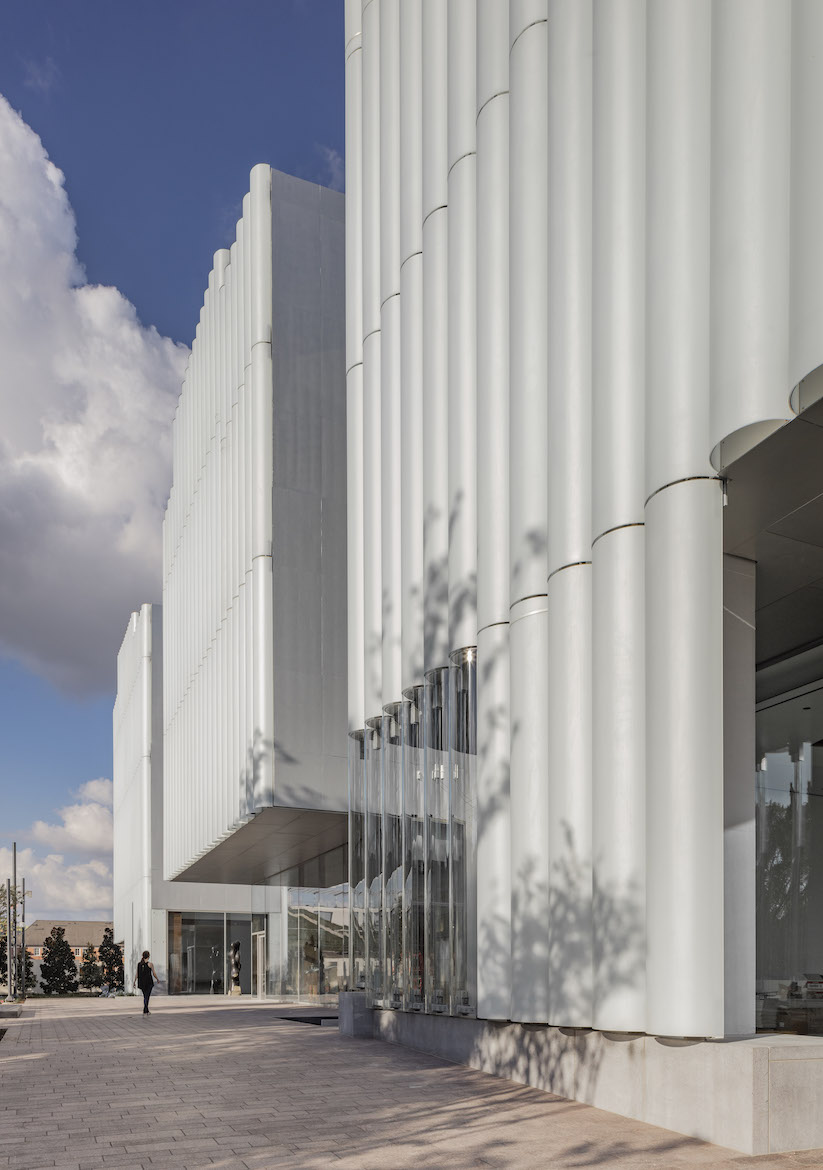 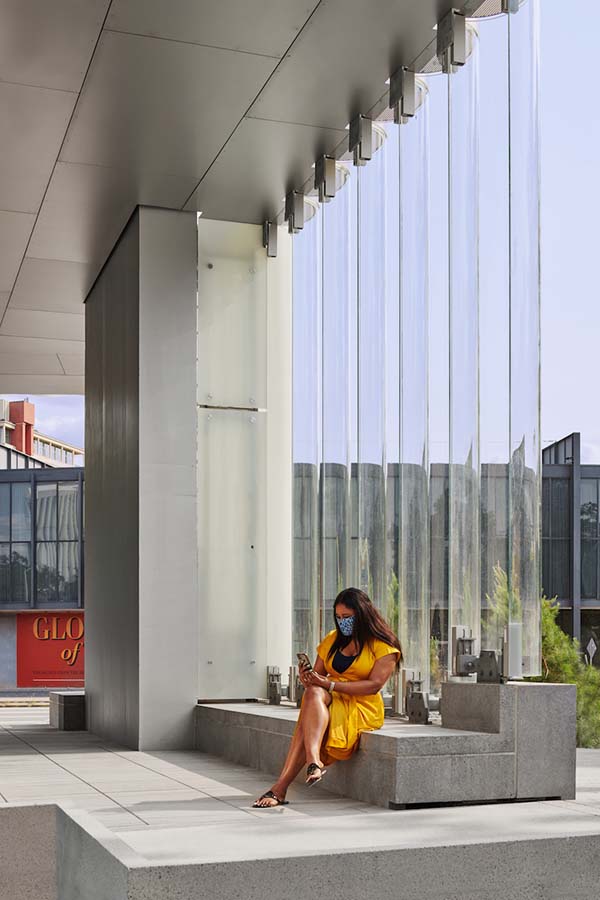 Clad in half-tubes of etched glass, the translucent facade is punctuated by a section of clear curved glazing near an entrance on the west side of the building. Photo 1 © Richard Barnes, courtesy MFAH; Photo 2 © Peter Molick, courtesy Steven Holl Architects, click to enlarge.

In 2011, after an invited design competition, the museum named three finalists from a shortlist of eight: Morphosis, Snøhetta, and Steven Holl Architects (SHA). The original brief called for a new gallery building on the site of a parking lot across from the Caroline Wiess Law Building (a Neoclassical structure by William Ward Watkin, with expansions by Mies completed in 1958 and, five years after his death, in 1974) plus a new seven-story parking garage to sit behind the MFAH’s too-small Glassell School for Art, which Eugene Aubry designed in 1978. Instead, Steven Holl and his team decided to rewrite the program, offering an alternative vision for a cohesive campus with subterranean parking under both a new art school and a separate gallery building. “I told the jury it was like a freight train going down the tracks,” recalls Holl. “They could simply throw the switch now and change the course of the museum’s future.” Although SHA’s proposal increased the museum’s overall fundraising goal to $450 million and extended the construction timeline, the firm received unanimous approval for the project, including a new, larger Glassell School and a public plaza, which opened in May 2018, and now the Kinder. 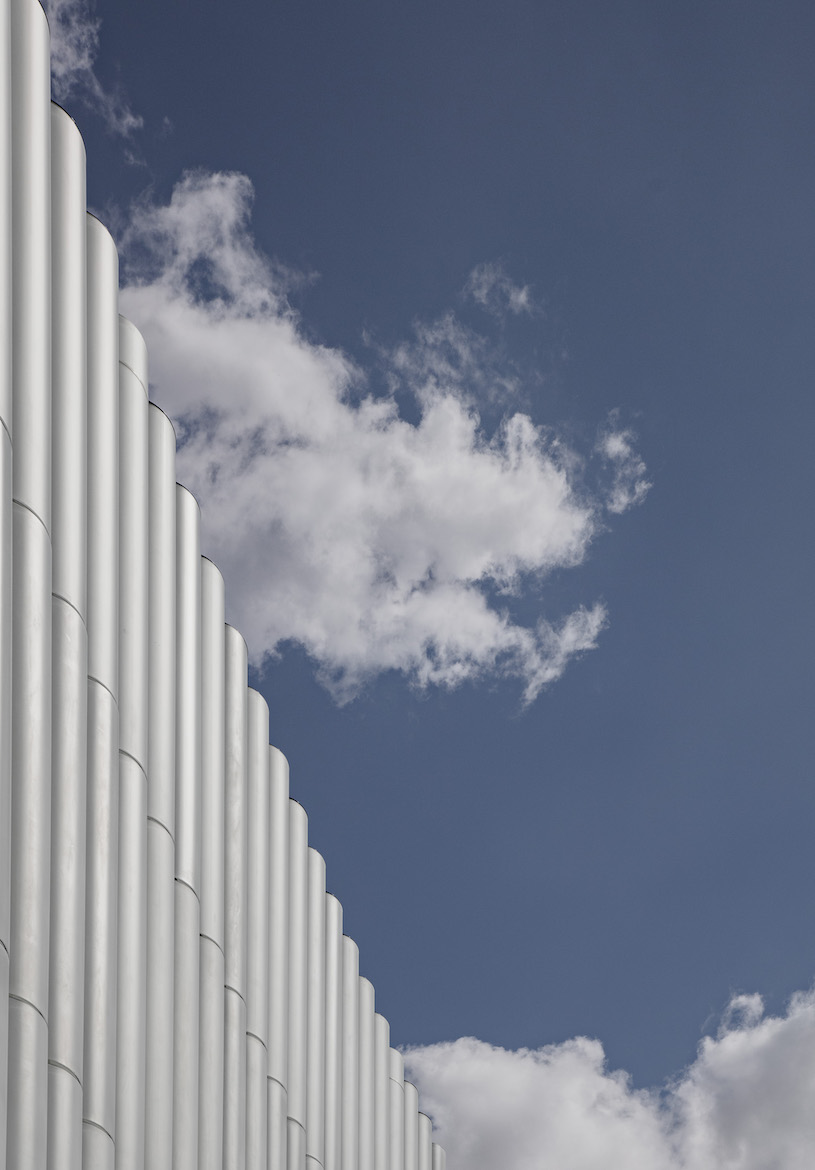 While Holl’s vision for the gallery came from the shifting shape of clouds, its form was derived from its trapezoidal site in Houston’s increasingly pedestrian-friendly Museum District. (New York–based landscape-design firm Deborah Nevins & Associates has transformed Bissonnet Street, which splits the campus, adding an esplanade and improving street crossings.) The Kinder’s southern exposure arcs along Bissonnet, mirroring the uniquely curved facade of Mies’s Law building, while the east side engages the one-acre sculpture garden designed by Isamu Noguchi in the mid-1980s. Weaving together the campus’s various components, the architects have created a dramatic but respectful expansion for the institution, capitalizing on two principles that, as Holl and his partner Chris McVoy note, underpin much of the firm’s work: porosity and light. 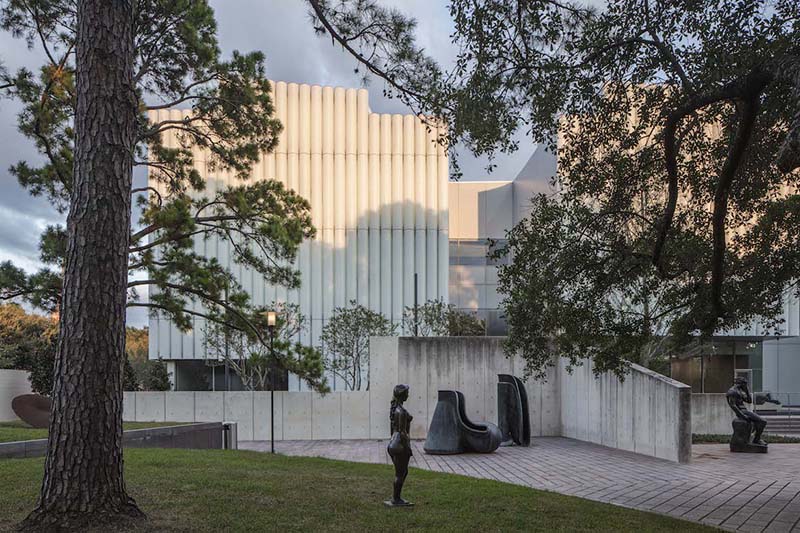 The Kinder Building as seen from the Cullen Sculpture Garden, designed by Isamu Noguchi in the mid 1980s. Photo © Richard Barnes, courtesy MFAH

The idea of using translucent glass tubes for cladding arose early in the competition, as the design team considered what materials and shapes would harmonize with the glass-and-steel Mies addition, Moneo’s limestone Audrey Jones Beck Building, and SHA’s new precast concrete Glassell School. “When expanding or adding to an existing structure, like at the Nelson-Atkins Museum of Art, we often play off the context,” says McVoy, referring to the glazed and partly underground expansion by the firm for the Kansas City institution. “But here, contrasting with more than one building, it had to be even more dynamic.” Half-cylinders of etched, laminated glass, with a PVB resin interlayer, up to 19½ feet in length, allowed the architects to achieve their desired visual effect while carrying the necessary wind load and meeting budgetary constraints. Enclosed by mesh at the top and bottom to keep birds out, the ventilated facade allows hot air to passively rise up and out of the cavity between the glass tubes and the structural cast-in-place-concrete walls, explains Larry Burns, principal of associate architect Kendall/Heaton Associates, who has worked on MFAH projects since 1993. Modeling by climate engineers Transsolar revealed that the assembly could reduce overall cooling requirements by some 40 percent. Appearing opaque by day, the building is translucent at night, as windows behind the tubes on the north and west facades emit a soft glow. Linear uplighting washes over the eastern and southern elevations. 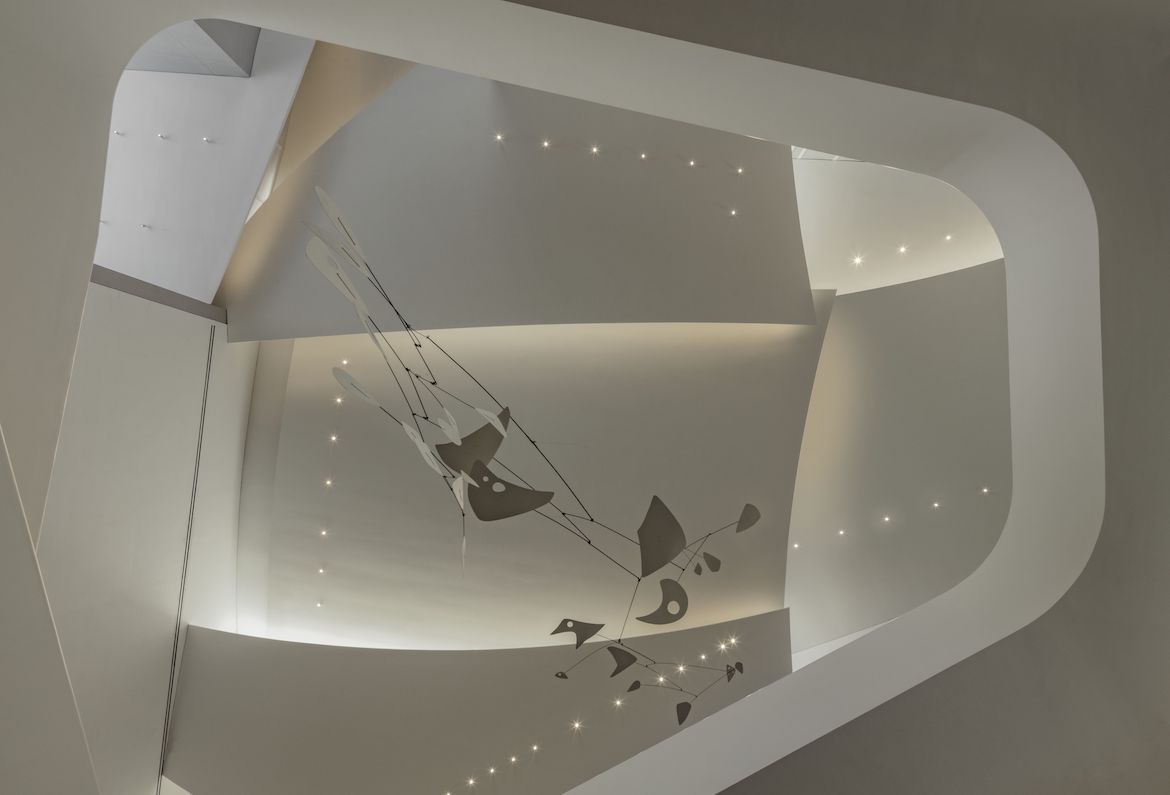 In contrast to the diffuse light admitted through openings behind the glass facade, bright sunlight streams into the museum’s atrium, thanks to six reflecting pools that occupy notches in the base of the building. Floor-to-ceiling windows on the innermost wall of these indentations, which cut into the concrete structure, grant views out to the landscape from all three floors, while the liminal interior spaces they animate become moments of respite between suites of galleries. 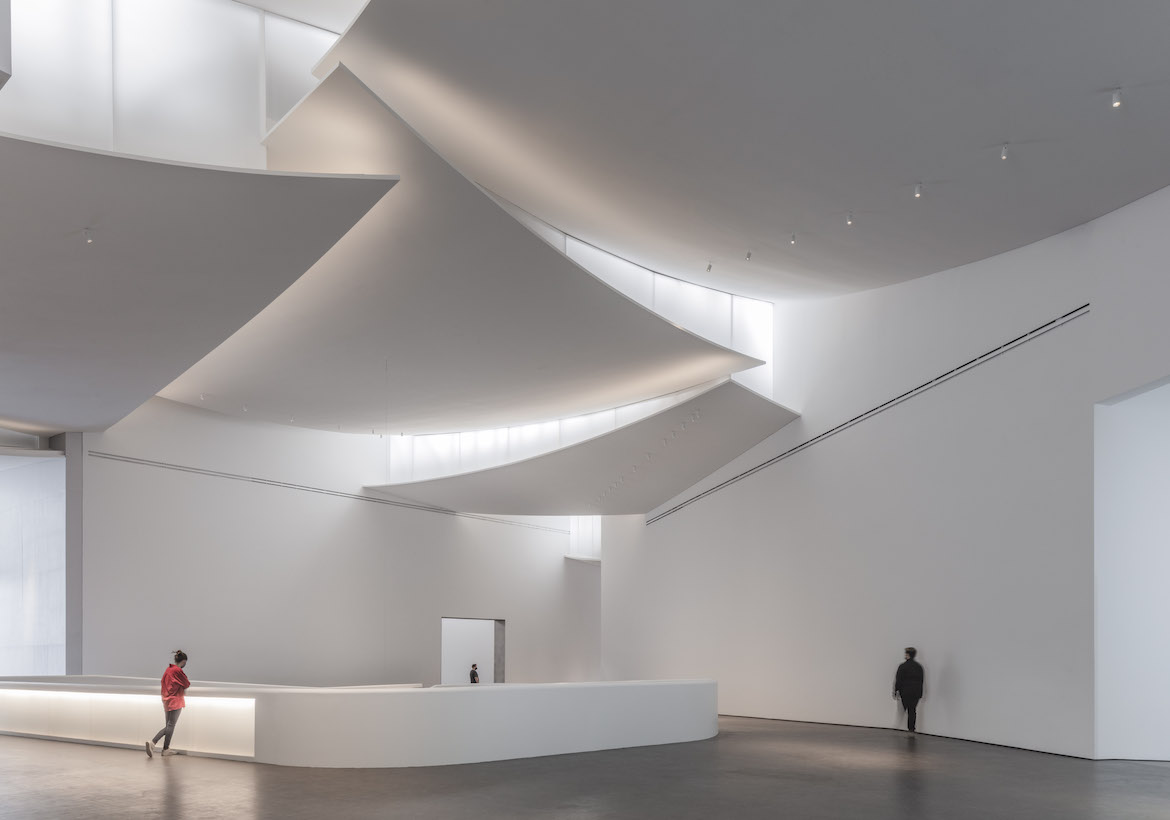 Clerestory windows formed by the “cloud” panels of the roof allow diffuse sunlight to illuminate the third-floor atrium. 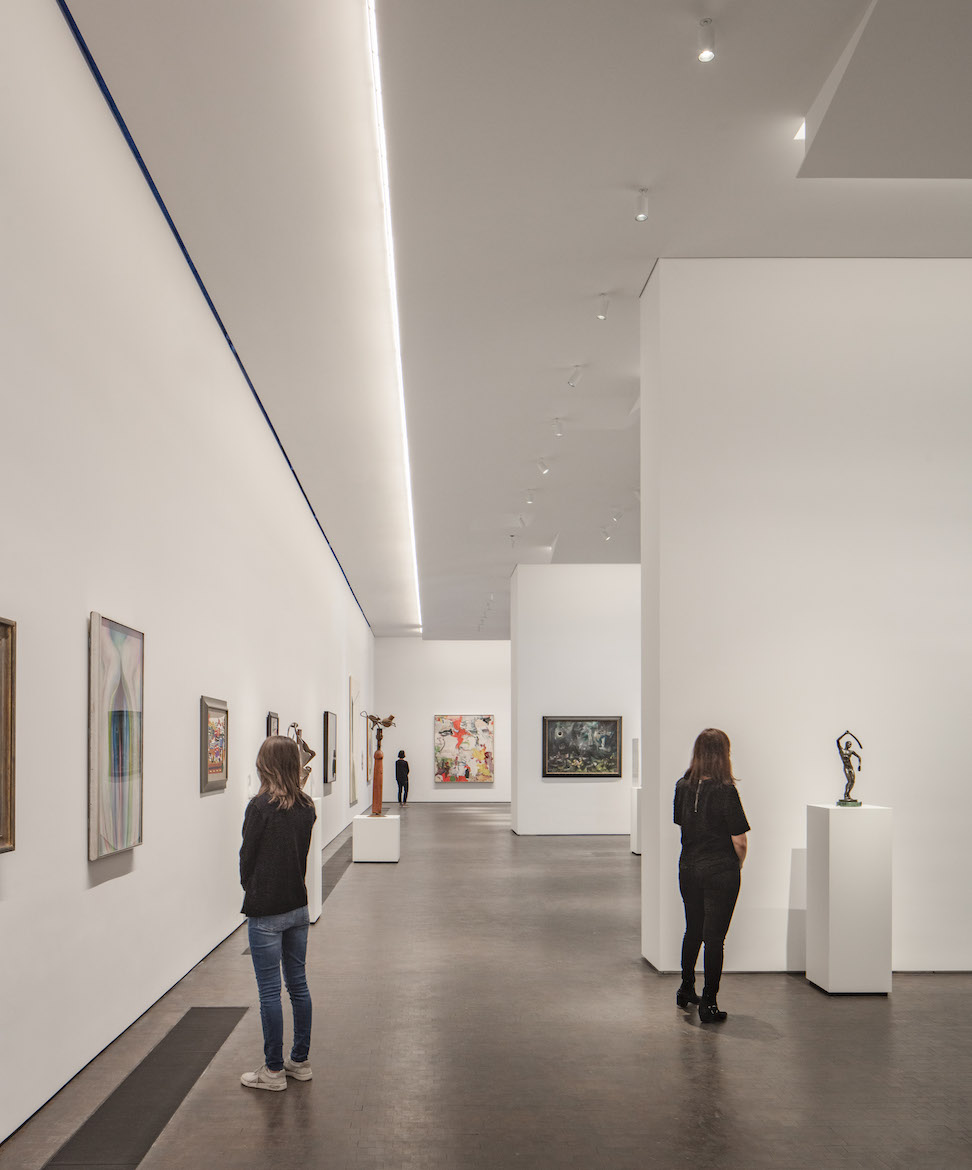 Holl looked to exemplars of museum architecture in Texas when envisioning the Kinder’s interior illumination. “I wanted to design a building with a light as inspiring as Lou Kahn’s Kimbell Art Museum,” he says, “but more organic, more dynamic—like the clouds.” The solution came in the form of a “luminous canopy” roof, made of structural “petals” that swoop down to form an assemblage of clerestory windows. The design of these cloudlike petals went through many iterations—evolving from gestural watercolor paintings to detailed 3-D modeling to full-scale mockups—as SHA collaborated closely with structural engineer Guy Nordenson & Associates, Transsolar, and lighting-design firm L'Observatoire International. The team ultimately devised a system of curved, custom I-beams, milled from lightweight steel, to create a paneled roof system that admits and diffuses just enough light for the safe display of art. Within the galleries, the light is gentle and balanced from floor to floor, with northern and southern exposures on the third level offering noticeably cooler and warmer illumination, respectively. Glass and translucent stretch fabric enclose the clerestories, allowing additional LEDs to be concealed within. Elsewhere, focused, tunable LEDs are tucked neatly into “flaps” that bend 10 inches down from the ceiling, recalling the organic shape of the roof petals. 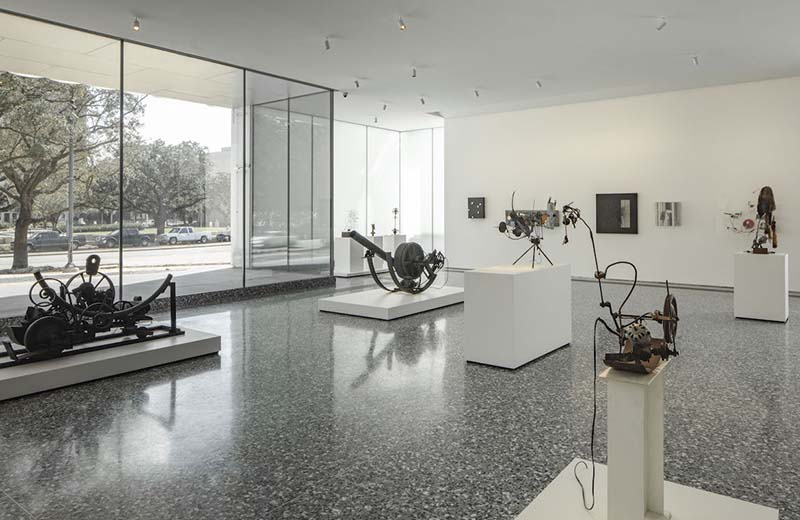 Large-grain terrazzo floors, pictured here in a street-facing gallery on the ground floor, echo those in Mies’s Law building. Photo © Richard Barnes, courtesy of the MFAH

Both plan and program contribute to the building’s inviting nature. Numerous ground-floor entrances as well as two restaurants and several large, street-facing sculpture galleries, visible through generous expanses of clear glass, make the Kinder accessible to passersby—though many visitors will enter directly from the new underground parking, via stair or elevator. Those who start their visit in one of the MFAH’s other gallery buildings, or in the Glassell School, can enter through two new subterranean tunnels, with light installations by Olafur Eliasson and the late Carlos Cruz-Diez. Circulation feels intuitive; regardless of how you enter the building, you are drawn into the central atrium, where a monumental curving stair wraps around and up the triple-height space, the museum’s center of gravity. 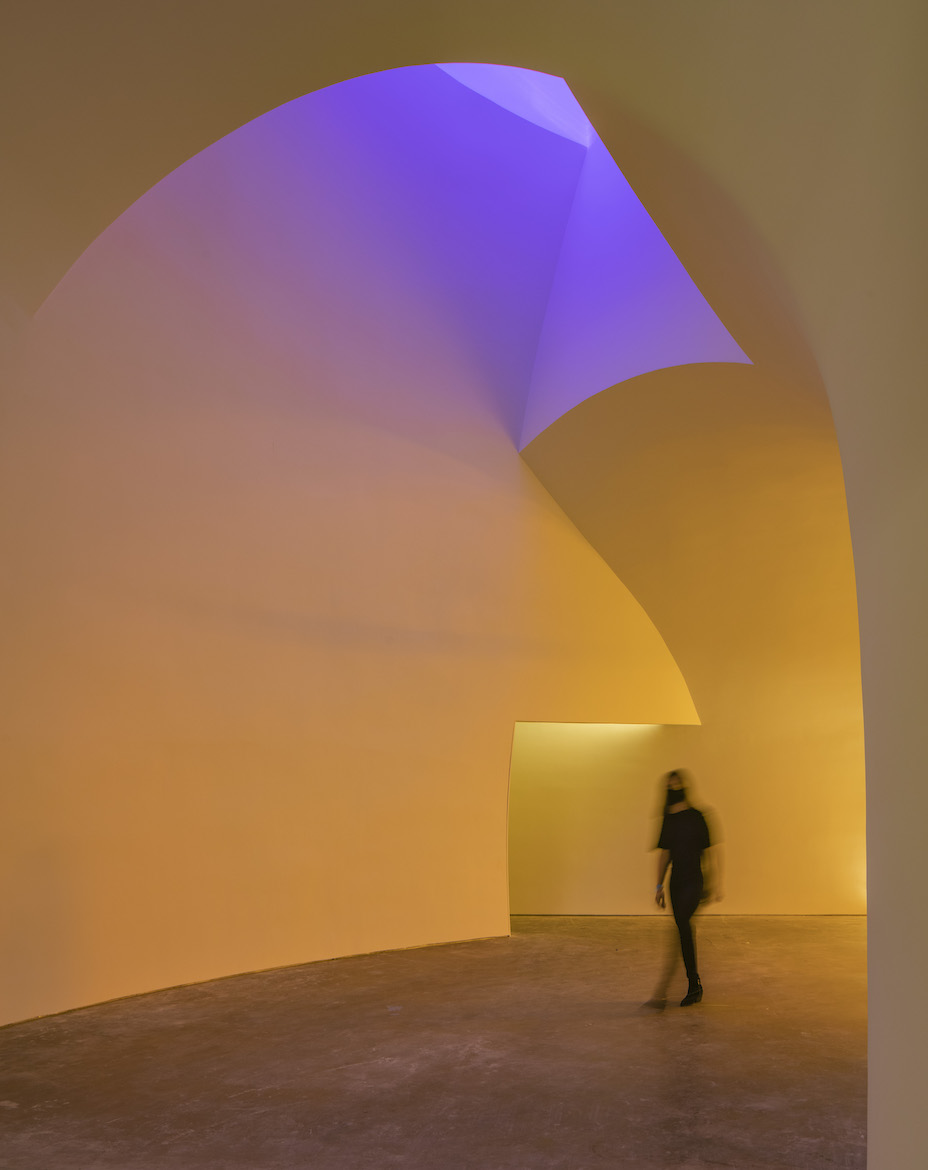 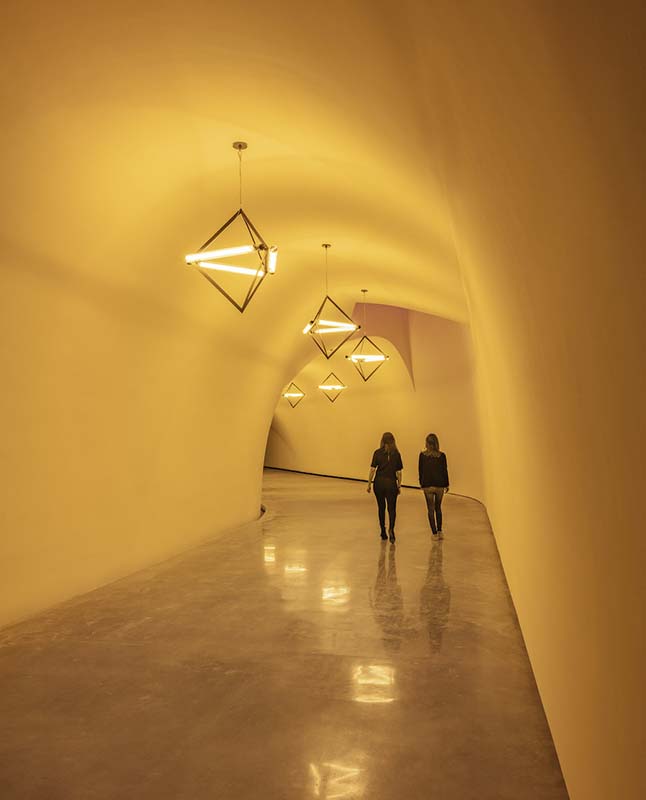 The MFAH commissioned a piece by Olafur Eliasson titled Sometimes an underground movement is an illuminated bridge for the tunnel that connects the Kinder Building and the Glassell School of Art. Photos © Richard Barnes, courtesy MFAH 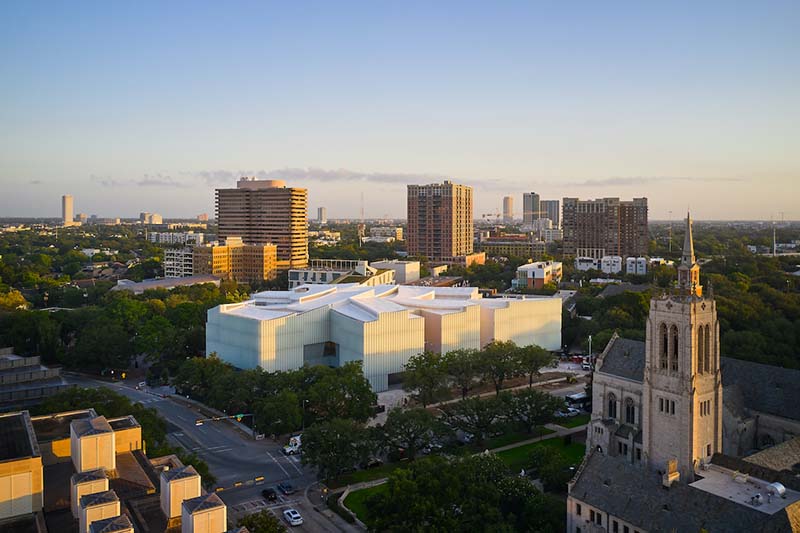 For Holl, the symbiotic relationship of the project to its urban context cements it as a highlight of his career. “It's not a standalone building,” he says. “It's a building that's about a campus.” As a literal beacon among the MFAH’s august grouping of structures, the Kinder graciously draws the public into the museum—then encourages them to see the collection, and the city beyond, in a new light. 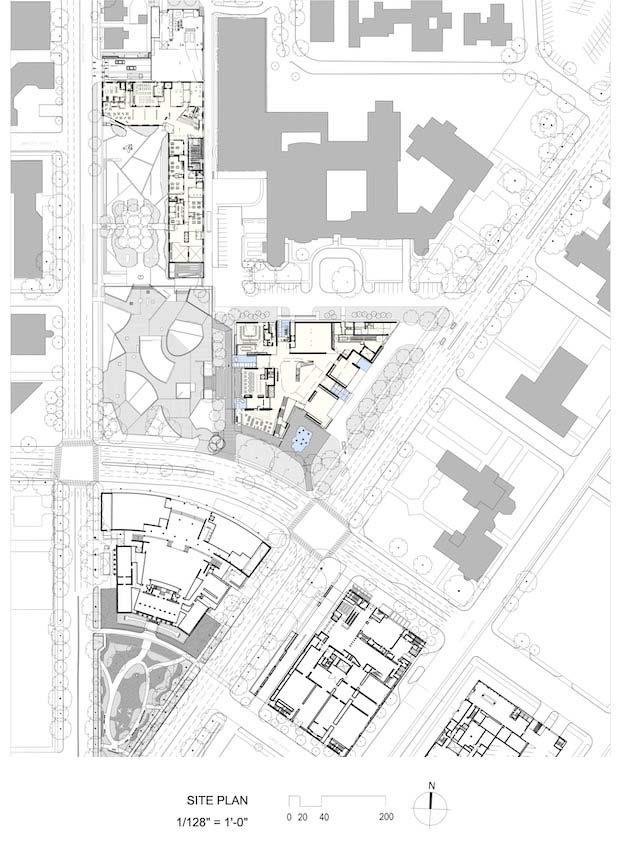 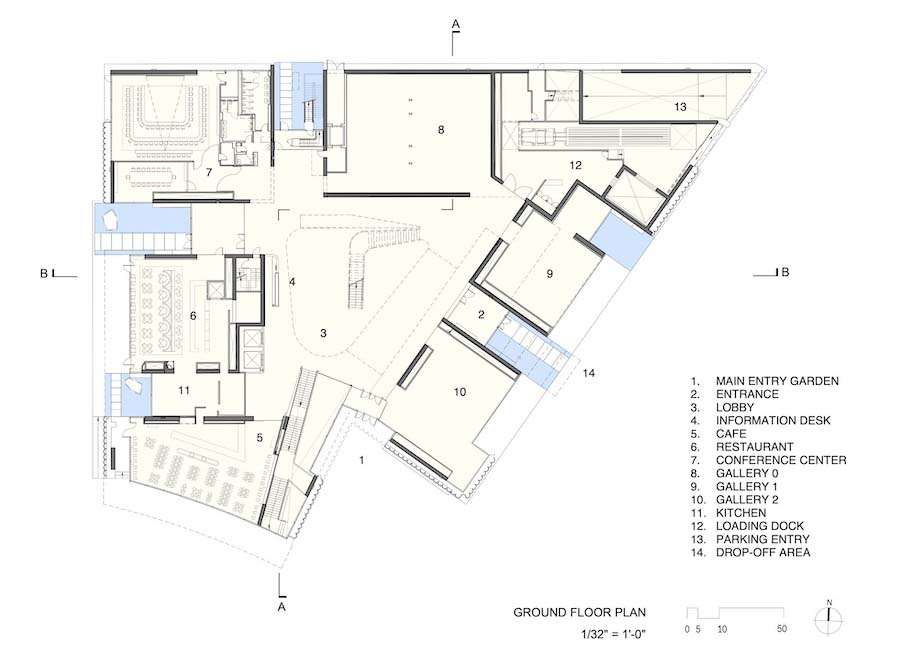 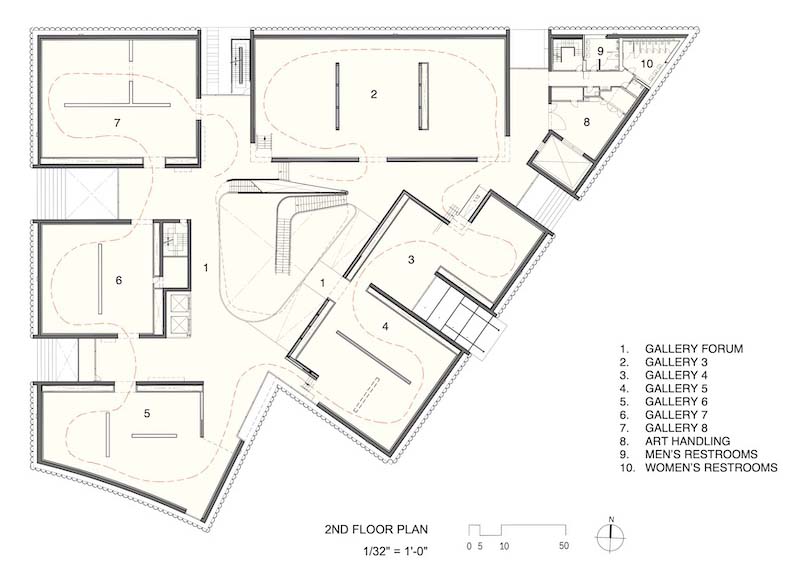