You might expect a Boston-based firm to adhere to a proper New England architectural tradition when designing housing in a picturesque town in the Berkshires. Not so. Merge Architect’s two multifamily housing structures, just added to a compound anchored by a 2016 residential conversion of the late 19th-century Cable Mills factory buildings in Williamstown, Massachusetts, is different. The firm eschews the regional architecture of white clapboard, black wood shutters, and gable roofs. Instead, the architects’ approach reflects the Modernist direction that took hold in the 1930s and ’40s in the Northeast after the International Style began to have an impact in that part of the country.

But what took root here was not necessarily akin to the machine-like, abstracted designs in the famous 1932 Museum of Modern Art exhibition, curated by Philip Johnson and Henry-Russell Hitchcock. Rather it was a hybrid Modernism that explored regional materials and building techniques typical of rural and industrial buildings, such as board-and-batten wood siding, timber framing, and vernacular, single-pitched roofs. And that concept is alive and well today in Merge’s new Williamstown housing projects, albeit updated in materials and design elements.

The firm’s Modern Mill is a two-story, six-apartment building, while the River Houses eventually will be a row of seven structures, each with two duplex units (only the first of which has been built so far). Because the original conversion of the Cable Mills factory received tax credits, the National Park Service and the Massachusetts Historical Commission had a say in the design considerations, such as building heights, roof shapes, and the choice of materials. 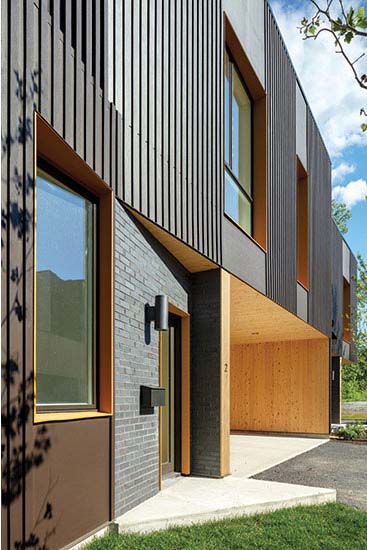 With the first of the River Houses, Merge carved out the volumes and pulled them apart to create voids for carports, patios, and porches. The charcoal gray board-and-batten exterior is actually fiber cement, and alternates with Alaskan yellow cedar, punctuated by gray brick at the entrances.

The six additional two-unit houses will extend along the Green River, which bends around the back of the site. As Elizabeth Whittaker, Merge’s principal, explains, the next one will feature more yellow cedar on the exterior, with the charcoal gray fiber cement board lining the carved-out portions; the third house will revert to a charcoal wrapping with yellow cedar for indented areas, and so on, in a do-si-do rhythm. 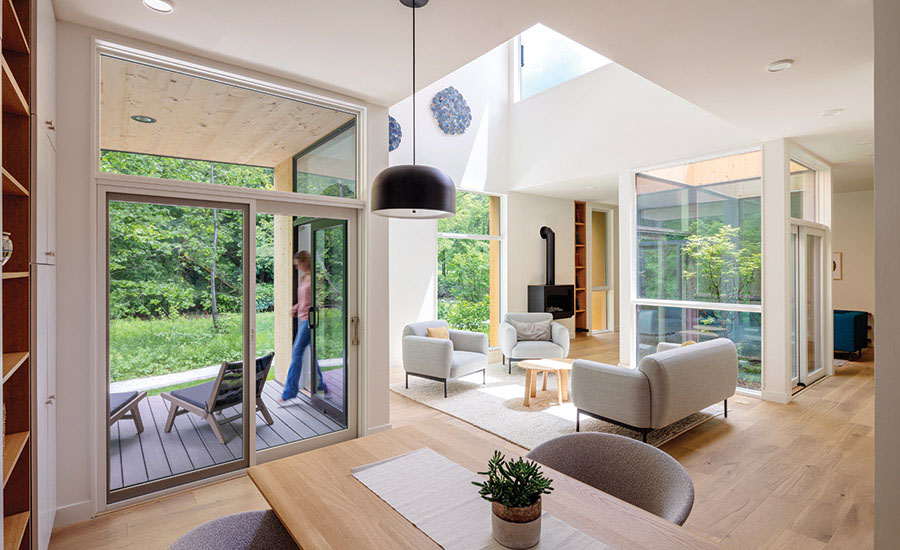 In River Houses, two views of a duplex living area (1 & 2) demonstrate how the atrium brings light into the living and dining spaces. Photos © John Horner 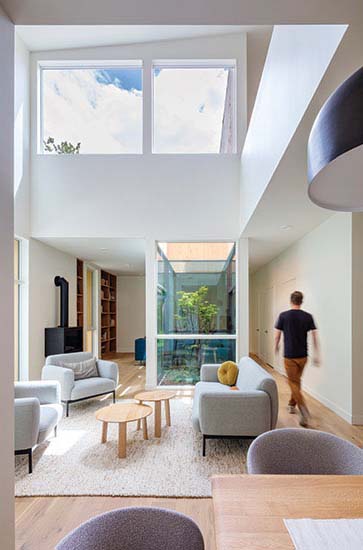 In Modern Mill, the exterior cladding combines a terra-cotta-painted fly ash-and-polymer material for the carved-out spaces, with Alaskan yellow cedar tongue-and-groove panels. Those narrow planks are articulated with fins to give the low rectilinear block a sense of verticality. Since Modern Mill is closer than the River Houses to the converted factory buildings, its rusty hues and solid shapes were intended to fit in somewhat with the complex of 1870s redbrick buildings. The new structure’s subtle single-pitched roof makes a gesture to the industrial-mill typology. 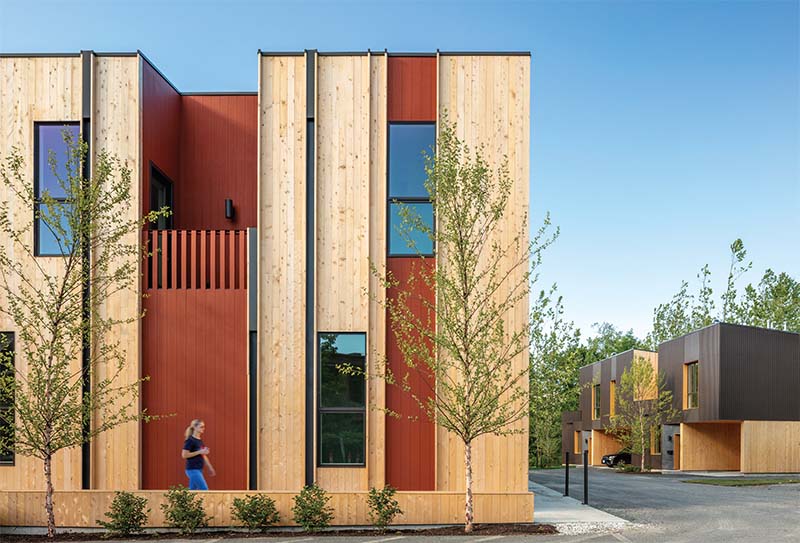 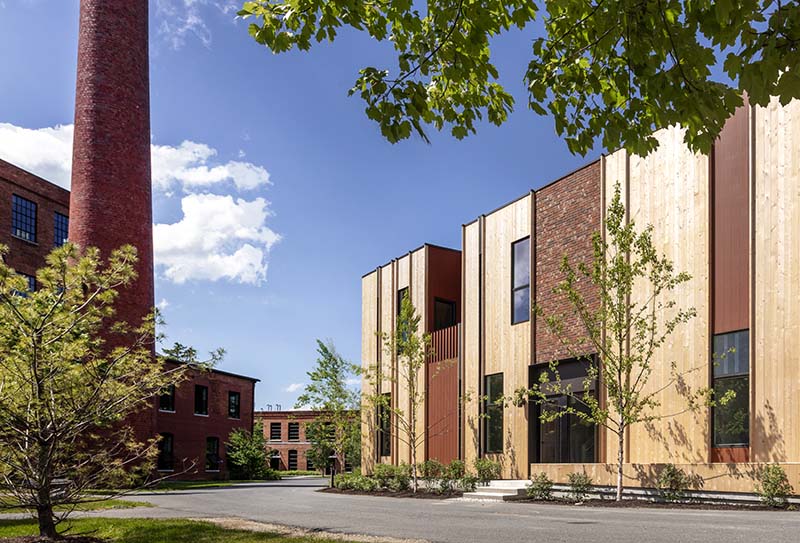 Modern Mill, a two-story block with six dwelling units is located close to the existing redbrick factory buldings that were previously converted to rental apartments.

When Mitchell Properties and Traggorth Companies found the neglected nine-acre property in the mid-2000s, they commissioned Boston architects Finegold Alexander to adapt eight factory structures to 61 rental apartments with high ceilings and black-steel-framed windows. The developers had seen an opportunity to provide multifamily housing close to the center of Williamstown and to the Williams College campus. Although the town’s population is only 6,000—swelling by 2,000 during normal school years—the college and such cultural magnets as the Clark Art Institute, and MASS MoCA in nearby North Adams, have been attracting curators, academics, and other professionals (and some retirees) to the area and, it seems, to Cable Mills.

To supplement the converted, rental portion, the developers decided to add the newly constructed condos. But they sought a contemporary look and were attracted to the modernist-industrial work of Merge. “We wanted the sensibility of the original mill buildings’ apartments by having double-height spaces and large windows, but with light wood frame construction,” says Whittaker, who founded her firm in 2003. (Whittaker won a Record Women in Architecture Design Leadership award in 2017 and her firm was a Record Design Vanguard in 2014.)

The first River House contains one 1,950-square-foot duplex with two bedrooms and another, three-bedroom, 2,400-square-foot unit. Inside both, the open plans and large windows take your eye immediately to views of the Green River and the pastoral setting. To bring in even more daylight and sense of space in the larger duplex, the architects inserted a glazed double-height atrium in the living area. 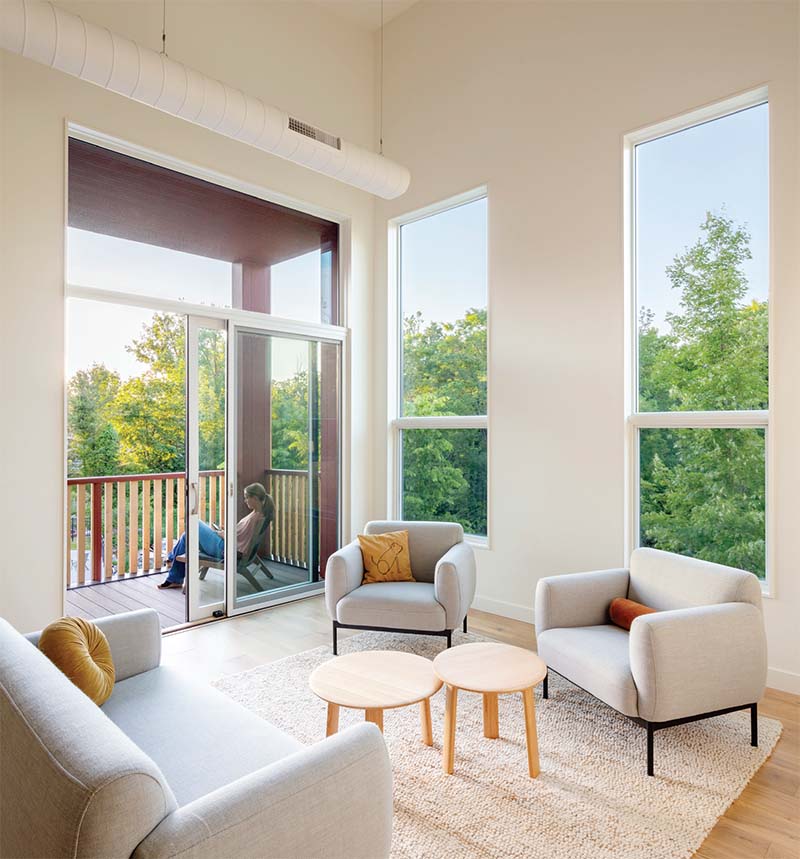 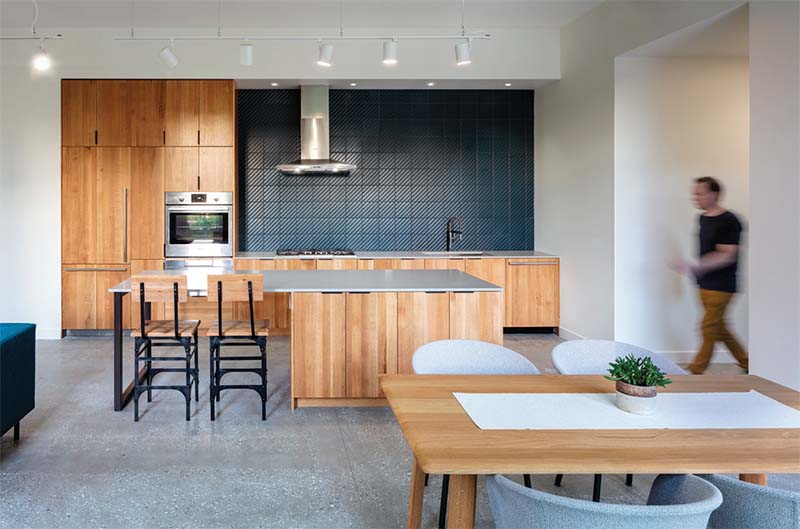 In the two-story Modern Mill, the single-level apartments vary from 1,450 to 1,800 square feet within one monolithic block, which is similar to the forms of the old mill buildings. As you enter the apartments, you find compressed corridors leading past bedrooms until you arrive at the dramatically expansive living/dining/kitchen area looking north to this building’s own view of the Green River. “The game is to get you to the river,” says Whittaker of the plan. (One exception is an apartment on the northeast corner abutting the carport, where daylight is admitted through clerestory windows. Since the second-floor apartment here overlooks the synthetic roofing for the carport, a prospective resident might want sedum to be installed on the roof at some point.)

While contemporary materials made of fiber cement and fly ash-and-polymer replace actual wood, and double-glazing substitutes for what typically would have been single-pane glass, the housing easily brings to mind its midcentury heritage. Merge introduces its own distinctive approach with more articulated surfaces and a highly defined volumetric play of mass and void. The architecture is recognizable as a current design response, yet cohabits nicely with its historic context, continuing a modern legacy that is now almost a hundred years old.