Inspired by Picasso’s Cubist composition for a 1912 guitar sculpture, Steven Holl’s first building for the University of Iowa is a stealth work of architecture whose layered weathering-steel assembly and light structure hugs its site and juts out over a quarry pond. His second one is nothing like that.

Perched atop a hill, Holl’s new 126,000-square-foot Visual Arts Building is more cube than Cubist. Originally intended to have only two levels, its boxy form developed—after more than 40 schemes—with the need to squeeze as much program as possible onto a constricted lot at the edge of campus that is bordered by private property.

It was Holl’s deft siting for that first project a decade ago for the School of Art and Art History, which maintained an open green, that made it possible to build the new one—nearly twice the size of the former and right across the way from it—even though no one could have predicted the need for another art building.

In 2008, catastrophic floods ravaged the eastern half of Iowa in what was the fifth-worst natural disaster in U.S. history. The university suffered nearly $800 million in damages, particularly to its arts campus. Harrison & Abramovitz’s Hancher Auditorium (1972), for instance, was destroyed, replaced this year by a new performing-arts center by Pelli Clark Pelli.

Holl’s 2006 building was salvaged. His new one replaces the Art Building, which was built on the west bank of the Iowa River in 1936 after the plan of Palladio’s Villa Emo near Venice. It was damaged to the point where it could no longer support its program. With financial assistance from FEMA, Holl’s latest campus contribution, designed with partner Chris McVoy, restores the exact square footage lost from the Palladian structure and later additions from the 1960s and ’70s. (The additions were razed, though the original red-brick portion remains standing; the university hopes to repurpose it.)

Concrete rather than steel, volumetric rather than planar, the new Visual Arts Building comprises bare-bones interiors within a beautifully crafted envelope of zinc-clad poured-in-place concrete walls. Portions of those perimeter walls throughout the four main levels slip away from the straight planes of the orthogonal container to create angled setbacks. (A small penthouse leads to open-air studios and a green roof.) Six cuts, or scoops, surfaced in channel glass, further articulate the facade and bring daylight deep within the building.

At its core, a seventh, and largest, cutout creates an irregularly shaped atrium wrapped by stairs and ramps that stretches from the ground floor to the roof—a much grander version of the social stair he employed at his earlier building. Holl calls it a “social condenser,” a place for the 1,600 students and faculty who occupy the space daily to meet and interact.

The rest of the interiors are all that they need to be—loftlike spaces with concrete floors, exposed pipes and ducts, and multiple points of daylight (dimensions for the variously sized square window openings follow the Fibonacci series). Maintaining that spare interior environment, however, is deceivingly complex, with energy requirements that rival those of a lab building due to the kilns (both indoor and outdoor), foundry, and fume hoods used in the creation of art that are spread throughout the building.

The exterior offers a different kind of industrial aesthetic. The southwestern and southeastern faces—which overlook Holl’s earlier building and where the main entrances are located—are covered in perforated stainless-steel panels that rest 5 inches away from the zinc cladding and windows beneath. The screens, featuring a pattern derived from the elliptical shapes of the building’s cutouts, modulate light and reduce solar gain where this is most needed, but also offer abstracted surfaces during the day, as well as an alluring glow at night when the interiors are humming with activity.

The Visual Arts Building at the University of Iowa is one of seven educational buildings devoted to studio art or architecture that Steven Holl Architects has either completed or is in the process of designing. Most famously, Holl designed the Reid Building at Scotland’s Glasgow School of Art directly opposite Charles Rennie Mackintosh’s touchstone building. There, he deferred to his famous neighbor by creating something that was the complete opposite of it. In Iowa, Holl is in conversation with himself but takes the same approach. Separated by 10 years and wholly different aesthetics, his two buildings are as individual as could be but unmistakably Steven Holl. Maybe the second one is better than the first; together they are two of Holl’s best buildings. And at a university that has long been a patron of contemporary architects—with buildings by Gunnar Bir­kerts, Frank Gehry, Charles Gwathmey, and Norman Foster—they are two of the best buildings on campus. 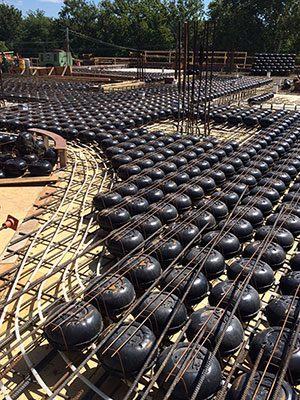 The visual arts building is one of only a handful of completed buildings in the United States to incorporate voided concrete slabs, and the first to use them in tandem with radiant heating and cooling.

The efficient system places plastic bubble-­shaped forms, arranged in a grid, at the center of the slab’s depth—where concrete is least effective—to span farther with the same thickness. “In this building, we were able to use 25 percent less concrete,” says Kelley Gipple of Structural Engineering Associates. Reduction in concrete could, however, be as high as a third.

In addition to creating larger column-free spaces, the system gives the slab a smoother finish, uninterrupted by beams, a motivation for Steven Holl to use it here and for Diller Scofidio + Renfro at the Columbia University Medical Center, completed within weeks of the Iowa project.

“We tried to utilize bubble slabs in several other buildings, including at our Surf Museum in France, where its use is more widespread,” says Holl.

But according to Gipple, “It takes a brave client to be among the first to try it.” There is a learning curve, though the biggest difference is that, rather than a continuous pour during construction, a small amount of concrete is poured and allowed to set with the bubbles in place.