With a patron who plays by her own rules, it was clear from the outset that nothing about Phoenix Central Park, a striking cultural center completed at the end of last year, would be conventional. The client, Australian billionaire art collector Judith Neilson, said she sought “something as close to the perfect ideal of architecture itself,” and commissioned not one but two firms to achieve it.

“There was almost no brief,” recalls John Wardle, whose Melbourne-based studio formed a unique collaboration with Sydney firm Durbach Block Jaggers (DBJ) on the design of a building that would combine visual with performing arts. Wardle tackled the taller, gallery space on the east end of the rectangular site, where a burned-down factory once stood, and DBJ the shorter space for performance on the opposite side. “It was a real trial for us,” says Wardle of the division of labor between the friendly offices, “but also the joy of the commission.” Though they worked independently to develop their respective aspects of the nearly 13,000-square-foot project, they “came together constantly” to create a cohesive brick-clad concrete structure separated by a triangular courtyard on the ground floor but connected through several levels above and below grade. 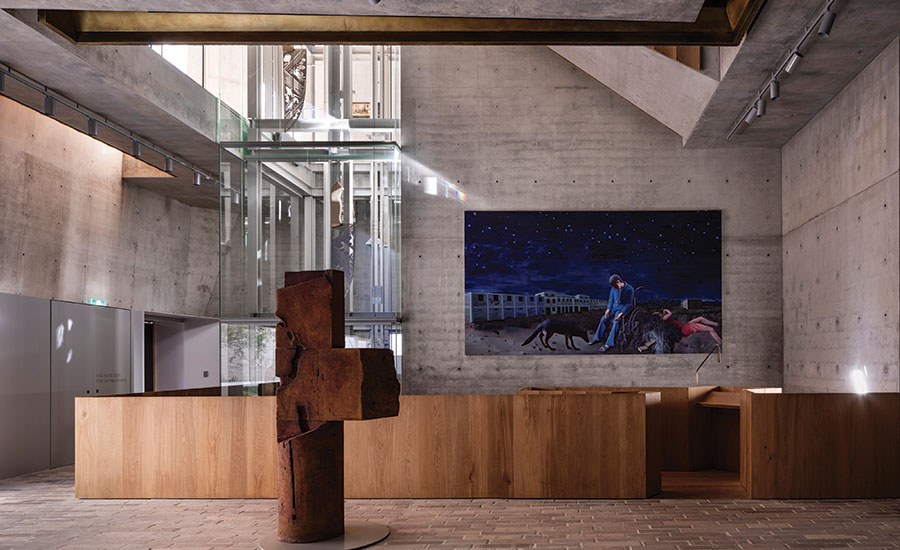 Located in Sydney’s Chippendale neighborhood, Phoenix is the latest evidence of the transformation this once-rundown inner-city suburb, previously home to manufacturing, has experienced in the last decade. Neilson herself—a familiar, if somewhat bewildering denizen to locals—is a driving force behind that evolution. In 2009, she opened White Rabbit Gallery there, a free-to-the-public exhibition space inside a former Rolls-Royce service depot, that displays her vast collection of contemporary Chinese art. Sydney architect William Smart, who converted that space, also designed Neilson’s house; her instructions for that reportedly included a staircase you could ride a horse up. A monument of sculpted concrete completed in 2015, the residence is situated directly next door to Phoenix’s gallery tower and is connected to it via a private passageway. 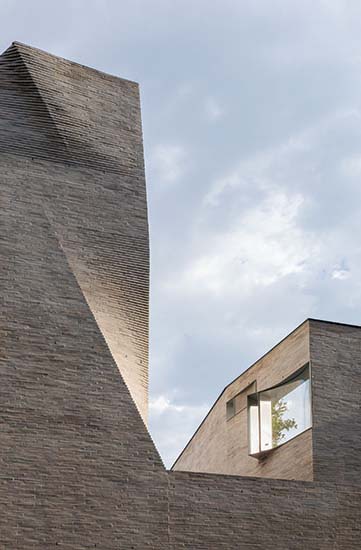 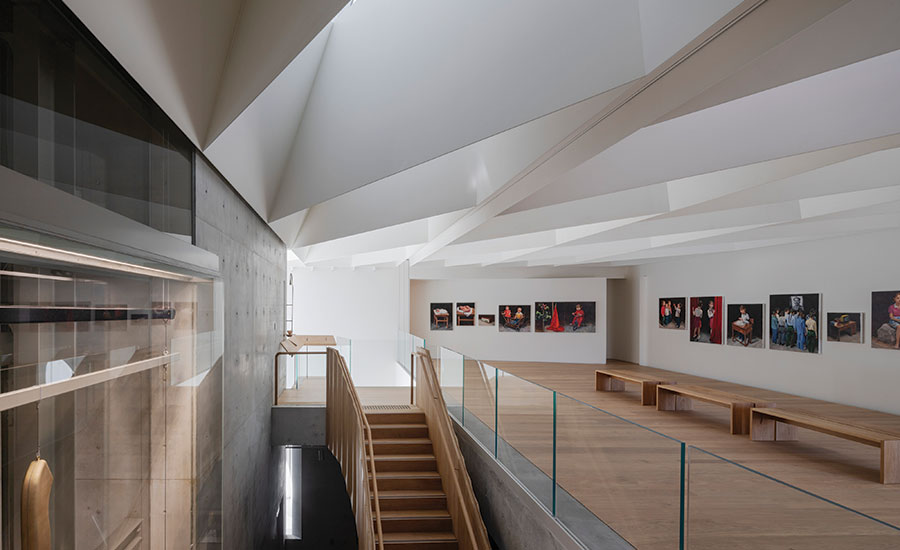 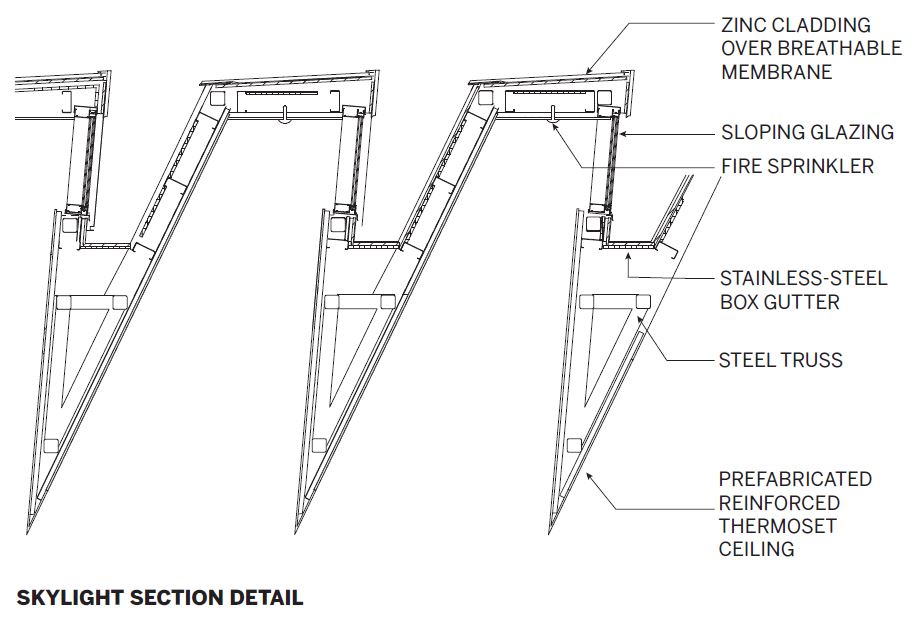 Within the crenellated top of the gallery building (3) is a mesh of steel trusses that form the coffered skylights of the top-floor gallery (4). Photos © Trevor Mein

The house had a clear impact on the design of the arts center: the facade of its imposing structure culminates, like a mailbox slot, in a swooping light well, matched in height, and bravura, by the jagged crown of the new gallery beside it. The architects chose a light gray-brown Roman brick to make it compatible with the exposed concrete of the house. “Any other material would have felt oppressive,” says DBJ partner Neil Durbach. Though they had intended for the brick to be laid with the eccentrically thick mortar joints that Swedish architect Sigurd Lewerentz used in his late church projects, where the masonry blocks seem to float like aggregate, the contractor would not comply. Instead, the finished exterior walls have a ratio of ⅓ mortar to ⅔ brick. The effect nonetheless is that of a thin building skin, like fabric, wrapped over a structure of many concavities and complexities—a half dome in the courtyard for instance—straight in some places, curving or dipping in others, and oddly crenellated at the top. Says Durbach, “It’s a strange building. It needed to be elastic.”

The giant double-circular window on the gallery tower may be another homage to Lewerentz, the barely visible frame of the larger disc making the aperture appear drawn on rather than inserted—as the 14-foot-wide custom, painted-steel frame was—by crane. The complexities and subtleties of the design do not end on the exterior, but are instead magnified in the contrasting interior spaces.

Wardle, who won the Australian Institute of Architects 2020 Gold Medal, the organization’s highest honor, is known for the craftsmanship of his buildings. In Phoenix, artwork in subterranean galleries hangs on plaster walls. Aboveground are expansive poured-concrete walls where art is affixed to a grid of holes left behind from the construction process. The large galleries give way to several intimate ones as you travel up the building, via two staircases, one clad in scalloped European oak—an objet d’art itself as it hovers in open space. Wardle points to Sir John Soane’s Museum in London as a reference for this “meandering journey through a collection.” The journey ends on the daylit top floor, where 32 diamond-shaped coffered skylights—constructed from a dense mesh of steel trusses positioned several degrees off the orthogonal plan—create a light so diffuse, Wardle calls it “fuzzy.” 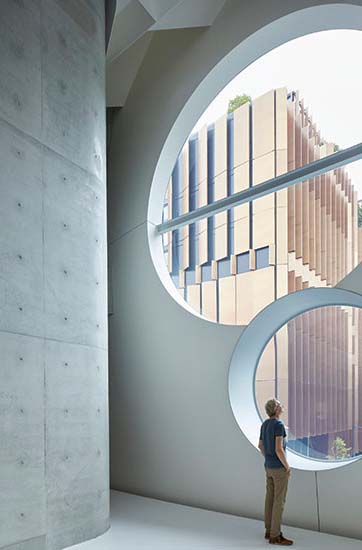 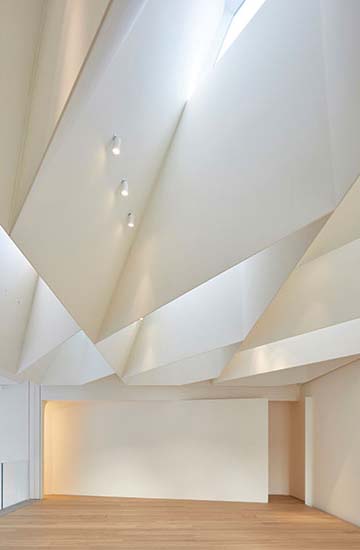 The geometry of the double oculus in the library (5) contrasts sharply with the diamond-shaped skylights of the top-floor gallery (6). Photos © Martin Mischkulnig

The labyrinthine galleries juxtapose with the spiraling performance space on the opposite side. Designed as a theater-in-the-round, the bell-shaped timber-clad volume, entered one level below grade, accommodates small audiences, up to 150 or so, dispersed across its flat floor, stepped landings, large balcony, and the various alcoves saddling the upper areas, for performance art and music recitals. “We wanted a singular space that would offer a sense of gathering and focus,” explains DBJ partner Camilla Block. The 4-inch-thick shell, corbeled in some areas like the brick outside, is made not of a fine material but a gritty, industrial-quality cross-laminated timber, selected in part for its acoustic qualities, that lends an overall softness to the space. Modeled on the computer and verified in large-scale maquettes that “you could put your head inside,” the heavily contoured timber puzzle was cut in Germany and erected by two carpenters on-site in three weeks, says Block. The theater was presciently set up to broadcast performances, which continue through the Covid lockdown, videos of which can be viewed online. Above that swelling moody room is a rooftop garden that erupts in an array of pastel colors. “We like to say it’s like going to heaven.” 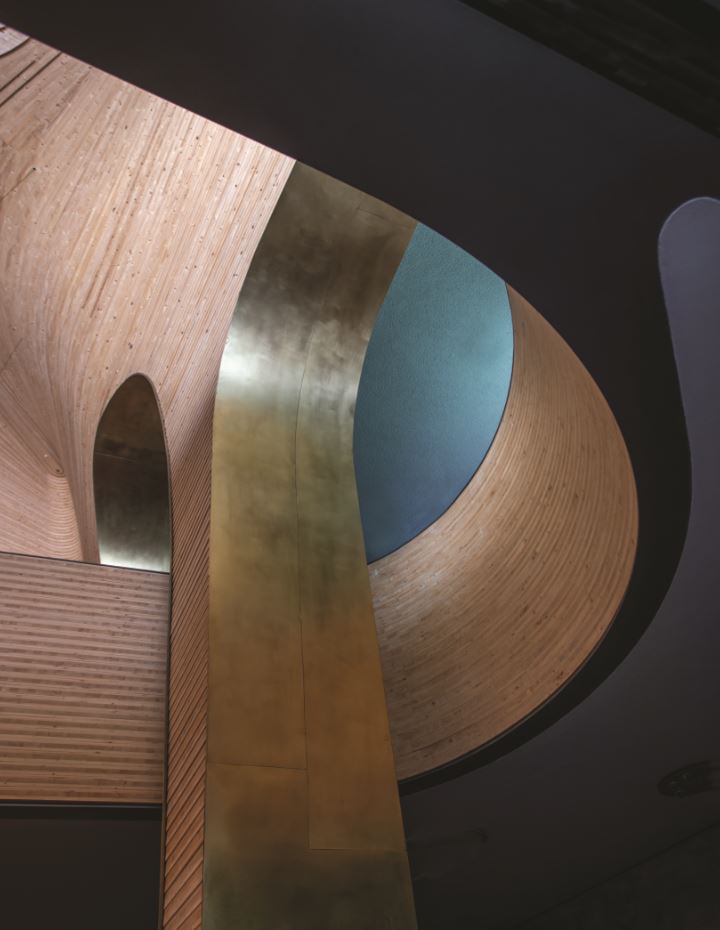 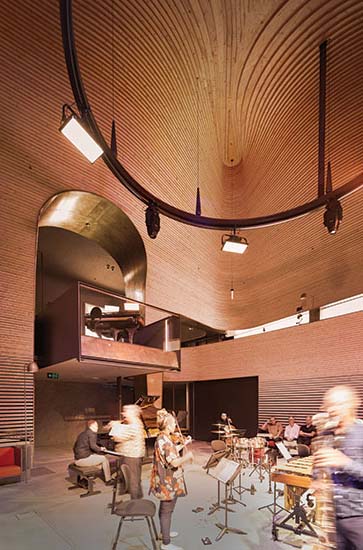 The underside of the swooping arches in the performance space is lined in brass.

“We have old ideas about architecture,” says Durbach. “Ideas about volume, threshold, intrigue. We want to make buildings that are mysterious and joyful.” Not regularly open to the public as White Rabbit is, Phoenix will remain, in part, mysterious to most. The building is, in spirit, an extension of Neilson’s home, where “the poetry of light, the pleasure of use, and the magic of materials” come together, according to Neilson—“a bit,” as Block describes its enigmatic nature, “like Judith herself.” 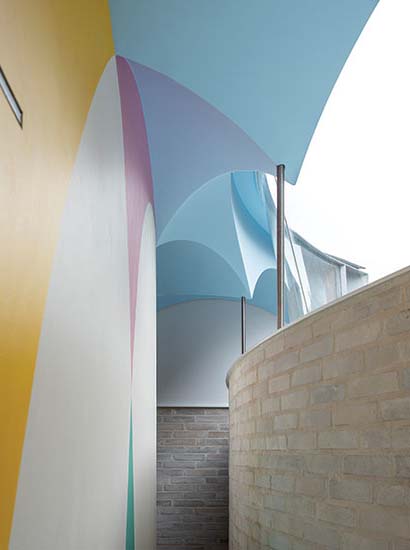 A rooftop garden above the theater erupts in pastel colors. Photo © Tom Ferguson 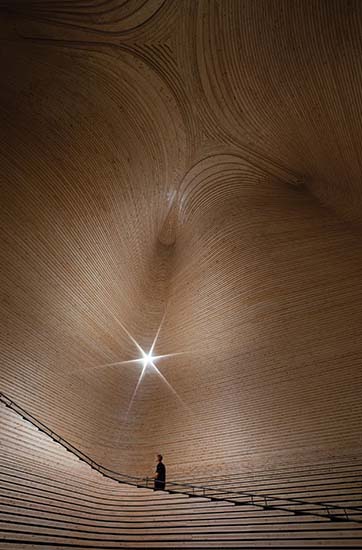 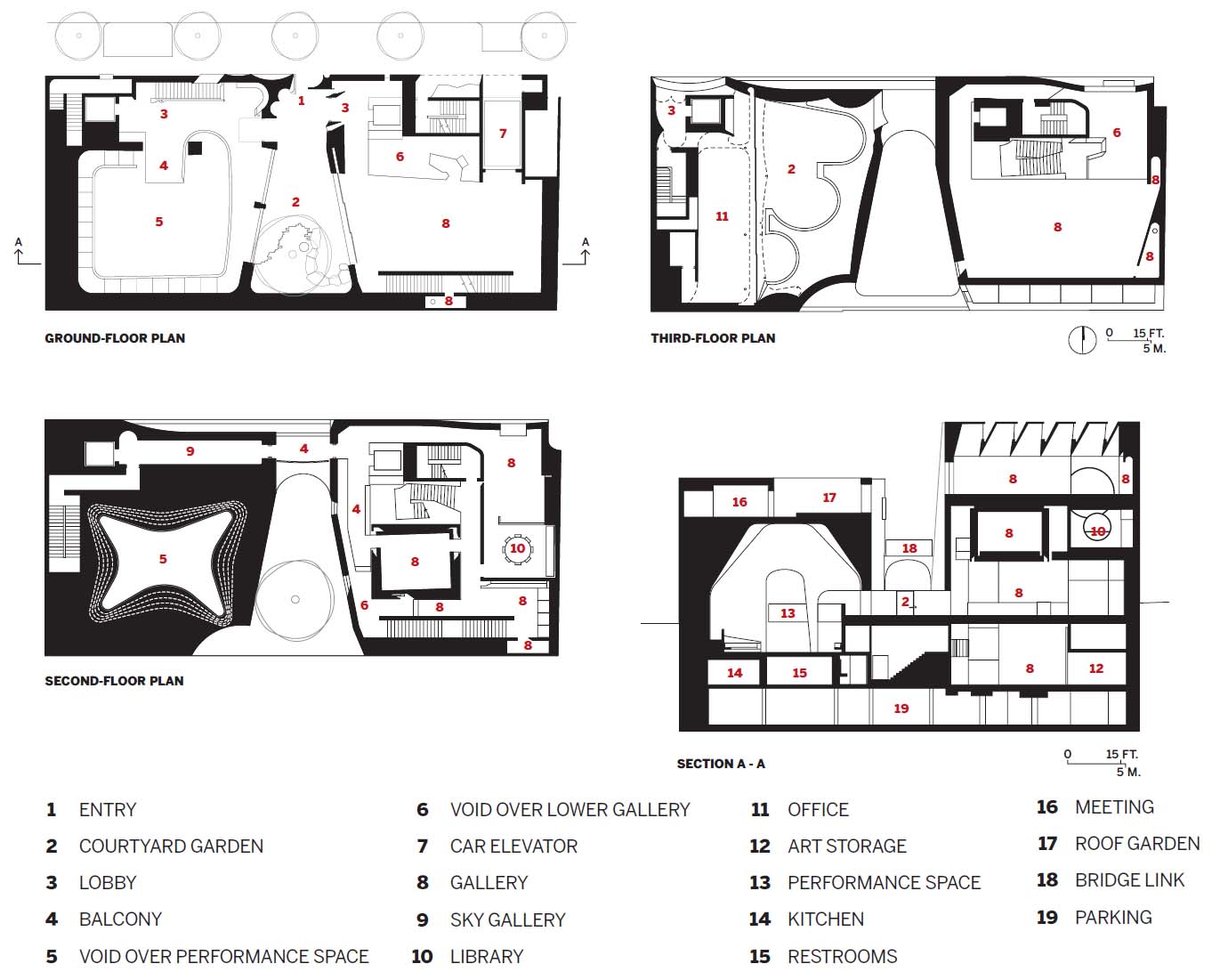