This website requires certain cookies to work and uses other cookies to help you have the best experience. By visiting this website, certain cookies have already been set, which you may delete and block. By closing this message or continuing to use our site, you agree to the use of cookies. Visit our updated privacy and cookie policy to learn more.
Home » Olympe de Gouges School Complex by Dominique Coulon & Associates
ProjectsBuildings by TypeK-12 School Design

Early Modernist architects designed school buildings to create healthy environments for young students by offering easy physical and visual access to the outdoors, aided by large glazed expanses that admitted daylight and fresh air to the interiors. Small in scale—only one or two stories high—these early exemplars incorporated patios, roof terraces, and playgrounds within their precincts, as demonstrated famously in the Crow Island School in Winnetka, Illinois, designed by Eliel and Eero Saarinen and Perkins&Will in 1940. Although this new typology soon became extremely influential in the United States, it was heralded even earlier by such International Style architects as Eugène Beaudouin and Marcel Lods, whose École en Plein Air (Open-Air School) opened in 1936 in Suresnes, on the outskirts of Paris. More recently, the Strasbourg-based architectural firm of Dominique Coulon & Associates has reinforced the value of that legacy, as seen in its Olympe de Gouges School Complex in Gidy, in central France. Completed in 2019, the kindergarten and elementary school facility for 400 students, named for an 18th-century female playwright and feminist, is an L-shaped two-story volumetric block of classrooms embracing playgrounds and an open courtyard. 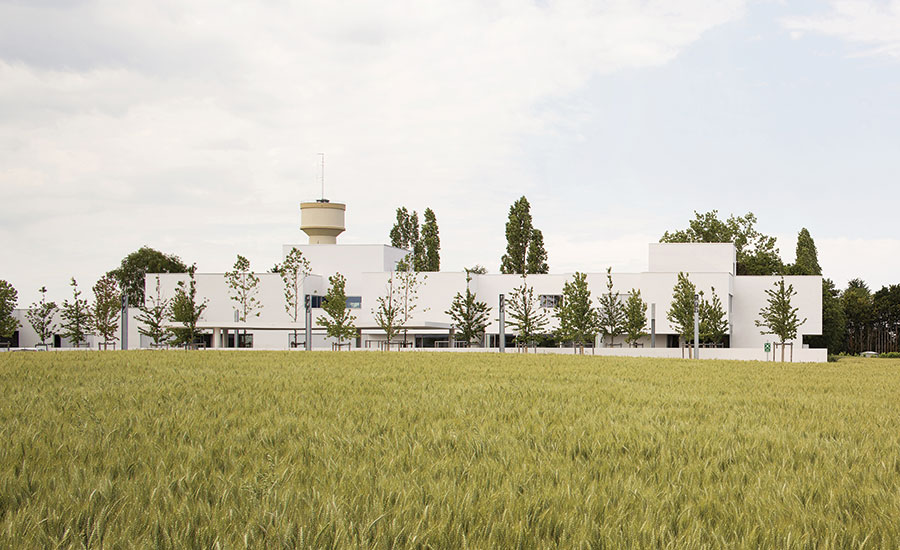 Like its 1936 Modernist predecessor, the school is gleaming white. Although Dominique Coulon, who founded his office in 1989, is known for his use of intensely saturated hues in various institutions—such as the Simone Veil School Complex in Colombes, France—he turned to a white-plastered poured-in-place concrete structure for Olympe de Gouges. The setting is “dominated by monotonous wheat fields on a flat terrain,” Coulon says. He felt this stark color would “better stand out against the earthy and green tones of the fields and trees.” Furthermore, the projecting and recessed boxy volumes of the structure would be sharpened and brightened by the play of sunlight on its smooth surfaces. 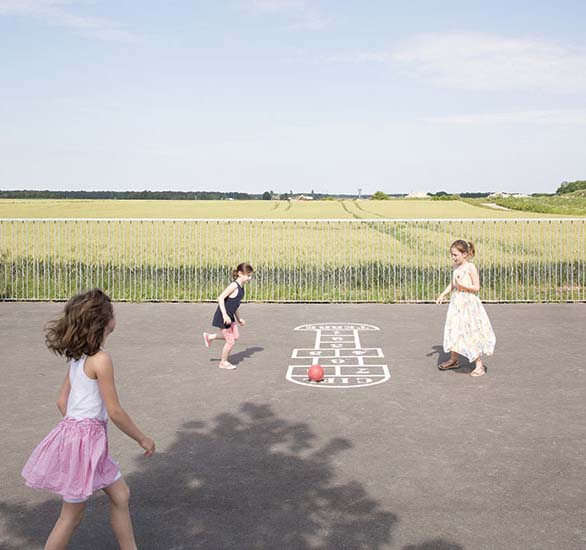 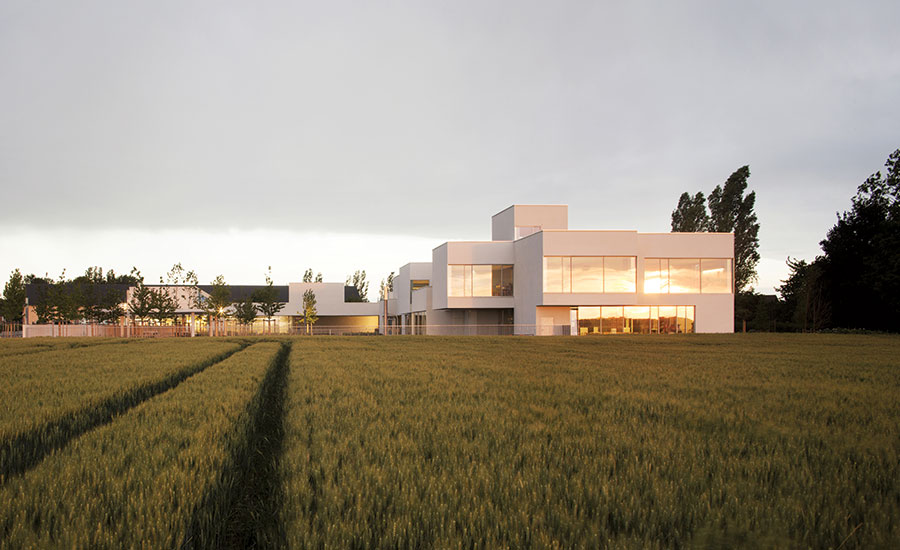 The landscape is integrated well into the school experience, seen from the play area (1) and from the east of the L-shaped block (2). Photos © Clémente Guillaume

The village-like complex, 36,200 square feet in size, is located on the northern edge of the small rural town (population 2,000) near Orléans. Coulon placed the building close to a road leading south into the town center. The 14 classrooms (preschool on the ground floor, primary school above) extend along the northern edge, while a shorter block on the west contains cafeterias for both teachers and students. The L-shaped ensemble not only embraces the playgrounds but opens out to the pastoral landscape on the east and immediately to the south. 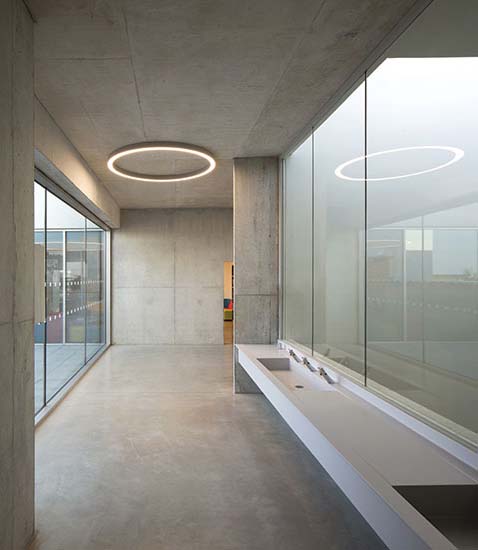 The architects provided handwashing stations in a hall on the second level of the classrooms—prescient, considering Covid-19. Photo © Clémente Guillaume.

While the building’s plan adheres to an orthogonal arrangement, Coulon pulled apart the differently sized square and rectangular classrooms to create indoor alcoves, rooftop terraces, and overhangs for patios. Instead of one main entrance, several access points are located on the playground side. Inside the school, says Coulon, “each space has its own identity, with its own large window and a particular view of the outdoors.” As he maintains, “Both the teachers and students can be more attached to a classroom when it is different from the others.”

Coulon wanted to vary the circulation route as well, which he did by both expanding and contracting the corridor widths, so that meeting spaces are created for informal gatherings of the young occupants. Since the interior is mostly exposed concrete, the ambience might have been as monotonous as the surrounding wheat fields without this manipulation of spaces, which are also enlivened by the ample glass expanses offering views to the outdoors and to areas within the school. 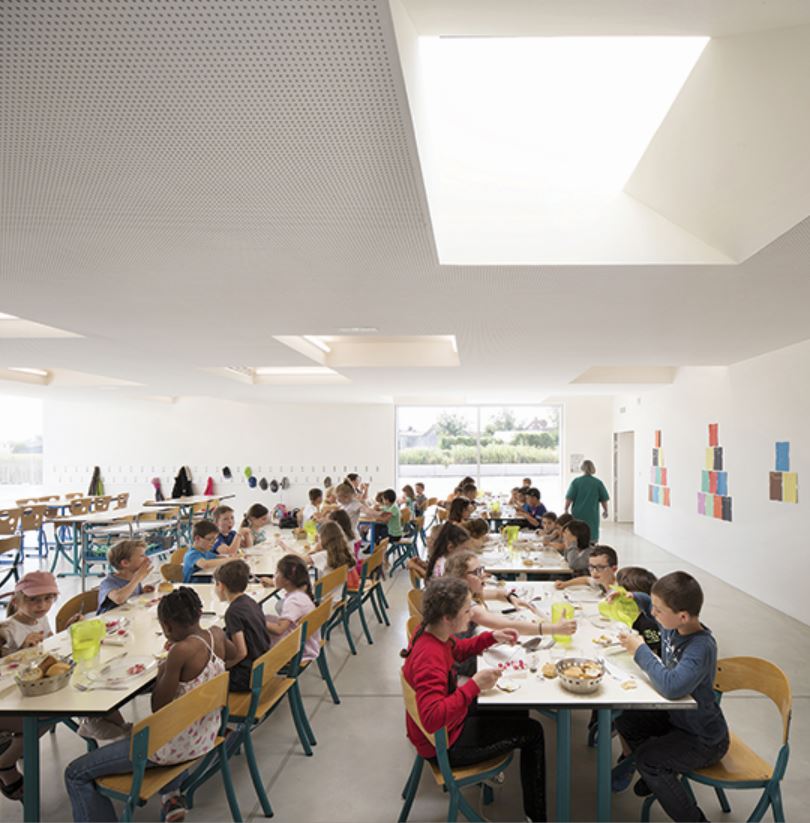 The cafeterias are illuminated by skylights. 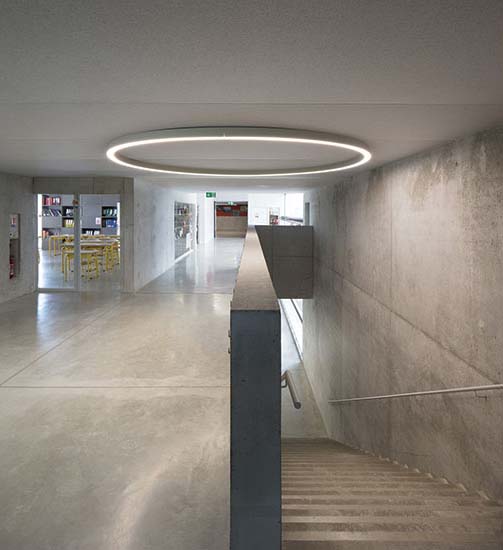 Circular luminaires light the concrete halls on the second level.

Circular, halo-like luminaires on hallway ceilings act as lanterns in a sense, but are intended by Coulon to create a “random effect that would make them seem to float through space.” Skylights carved into the ceilings of the cafeterias introduce sunlight and further animate communal spaces.

This open-air school, which evokes so much of Modernism’s ethos, combines light, air, the interplay of volumes, and clean, unadorned surfaces with spatial dexterity and simplicity. It also pays a tribute to the importance of concrete, which France pioneered in the early 20th century, as demonstrated in the work of Auguste Perret and Le Corbusier. “With the beton brut, we have sought to give the architecture a sense of permanence and timelessness,” Coulon says. Although the ultimate success of this worthwhile intention still depends on maintenance, the Olympe de Gouges School is a testament to the lingering importance of Le Corbusier’s directive, “Architecture is the masterly, correct, and magnificent play of volumes brought together in light.” 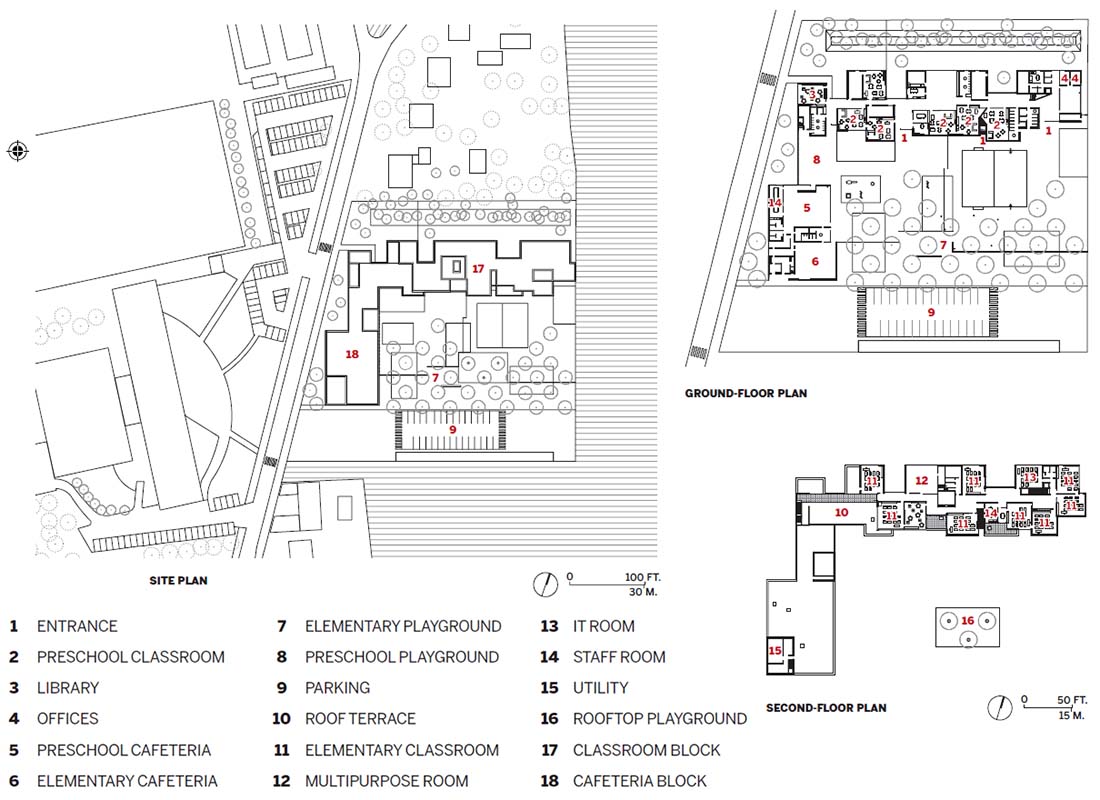