This website requires certain cookies to work and uses other cookies to help you have the best experience. By visiting this website, certain cookies have already been set, which you may delete and block. By closing this message or continuing to use our site, you agree to the use of cookies. Visit our updated privacy and cookie policy to learn more.
Home » A Decade of Energy Regulation in NYC Pays Off in Data and Carbon
Architecture News

December marked the 10th anniversary of New York City’s Local Law 84 (LL84), which requires owners of large buildings to measure energy and water consumption to help the city achieve “80×50”: an 80 percent reduction in carbon emissions by 2050. To mark the occasion, the Urban Green Council (UGC) released a report quantifying the city’s progress. The data will influence responses to the climate emergency locally and, probably, nationwide.

The report is, in part, meant to help keep building owners in compliance. Caps on energy consumption take effect in 2024 and become tougher by stages through 2050, with stiff fines for owners who exceed the limits. Since buildings account for two-thirds of New York’s greenhouse-gas emissions, achieving this goal will dramatically shrink the city’s carbon footprint, along with improving air quality and residents’ health. “This report highlights the importance of data in determining energy policy,” says Rick Bell, of the Consortium for Sustainable Urbanization and Columbia University’s Center for Buildings, Infrastructure and Public Space. “Ten years of benchmarking allow policy-makers and practitioners to analyze success stories and focus on where more can be done.”

The good news is that emissions from some 3,200 regularly benchmarked properties fell 22.6 percent over the decade, with particular gains in the commercial sector. Median emission intensities for the full benchmarked set followed a similar trend. The report cites five drivers: weather variation, cleaner electricity generation, improvements to the district steam system (which heats nearly a third of large office buildings), fuel switching, and more efficient energy use. When LL84 appeared in 2010, buildings over 50,000 gross square feet were required to report; with the addition of midsize properties (25,000–50,000 square feet) in 2017, the sample now totals about 25,000 buildings, comprising over 3 billion square feet in total.

The bad news is that progress is unevenly distributed, has slowed, and must accelerate to make 80×50 achievable. Uncertainties include whether residences and hotels can catch up with offices—the hotel sector actually lost ground, with 1 percent higher median energy use intensity (EUI), in part reflecting a steady 8 percent rise in occupancy from 2010 to 2018.

Because an early inventory found that 5 percent of buildings contributed 36 percent of citywide greenhouse-gas emissions, benchmarking initially concentrated on the largest buildings. As a result of a decade of data collection, the knowledge base is more granular now, says Laurie Kerr, president of LK Policy Lab and a veteran of the city’s Office of Long-Term Planning and Sustainability. “Ten years ago, when we passed these laws, we knew [buildings] were responsible for 75 percent of the city’s carbon emissions,” a proportion that electrical efficiency and other measures have reduced. “But we didn’t know how individual buildings were performing, and, even worse, the building owners didn’t know whether their buildings were efficient or not. So the benchmarking has been an eye-opener.”

One of the revelations is that some 3,000 multifamily residential properties are over their caps and will face fines if they are not in compliance by 2024. Midsize residences with high occupant density are particularly big emitters: nearly 30 percent were noncompliant in 2019.

Some initial citywide gains represented low-hanging fruit. Phasing out heavy fuel oil by 2015, for example, accounted for about a quarter of the carbon cut. Energy-efficiency improvements account for about a third, and must continue. Achieving 80×50, Kerr emphasizes, is not blue-sky aspiration but can be achieved with common building-science strategies that include reducing on-site fossil-fuel burning, phasing out antiquated boilers, controlling thermal losses at windows, increasing lighting efficiency, implementing Passive House–type strategies such as heat recovery, and using electricity for heat and hot water. New York State has committed to a carbon-neutral electrical grid by 2040, she notes. With 40 percent of carbon emissions currently attributable to electricity use, and electric cars soon to add to demand, meeting the goal will be essential, as will be efficient electrical transmission and distribution.

“This 10-year data set not only guides NYC’s climate approach,” says Urban Green Council CEO John Mandyck, “it can also inform decisions in other cities, so we can get to a low-carbon future faster.” 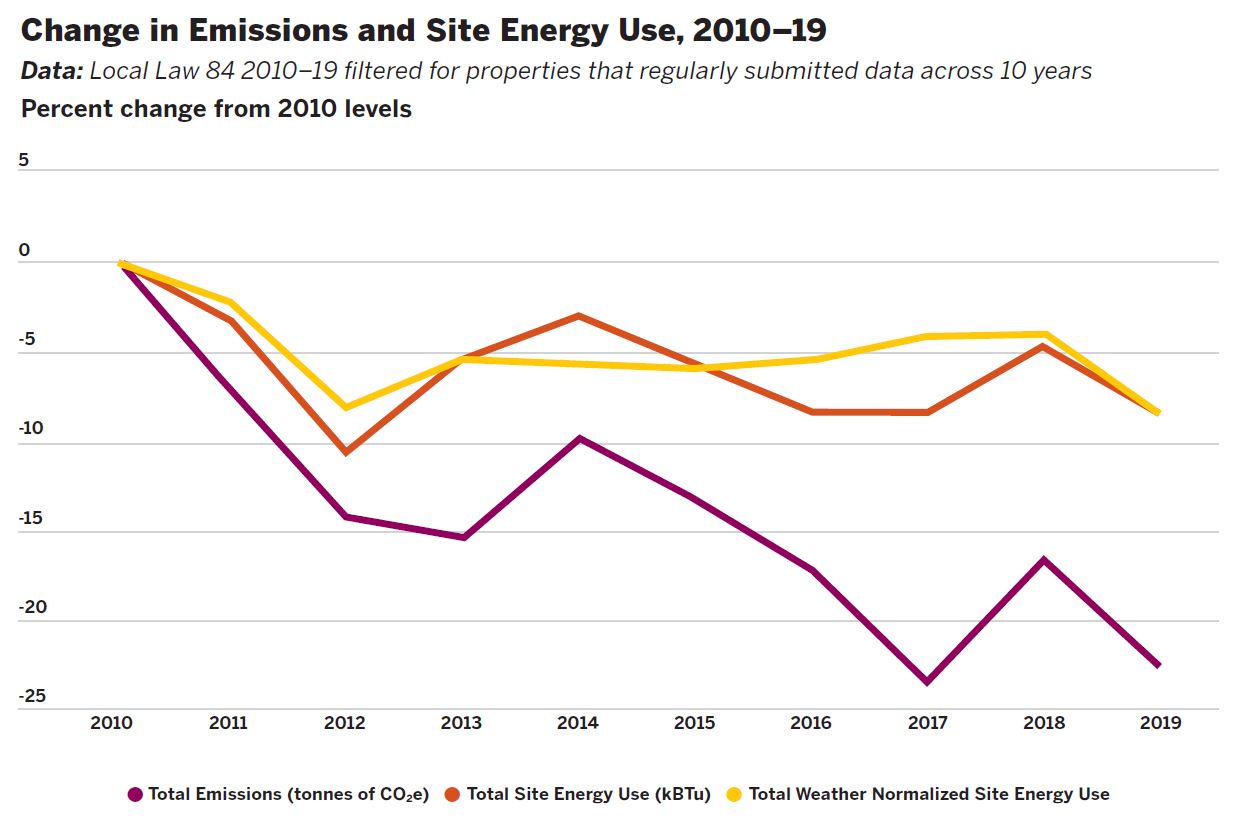 Task Force to Clarify Reporting on Hazmats and Alternatives

Bill Millard is a writer, editor, and musician based in New York City.

The Renewables Gambit: Putin Loses, the West Unites, and the Gambit Pays Off