Architect Christoph Ingenhoven describes Düsseldorf’s Schauspielhaus as “light, as though floating in the air.” The public theater, inaugurated in 1970, sits between the Gustaf-Gründgens-Platz and an expansive urban park, the Hofgarten. Enclosed in white serpentine walls and raised off the ground on piloti, its organic curves providing a strong contrast to the Miesian regularity of its immediate neighbor, the Dreischeibenhaus—a 25-story office tower completed a decade earlier. “I’ve admired the Schauspielhaus forever,” says Ingenhoven, who grew up in this northwest German city and whose eponymous practice is based there. 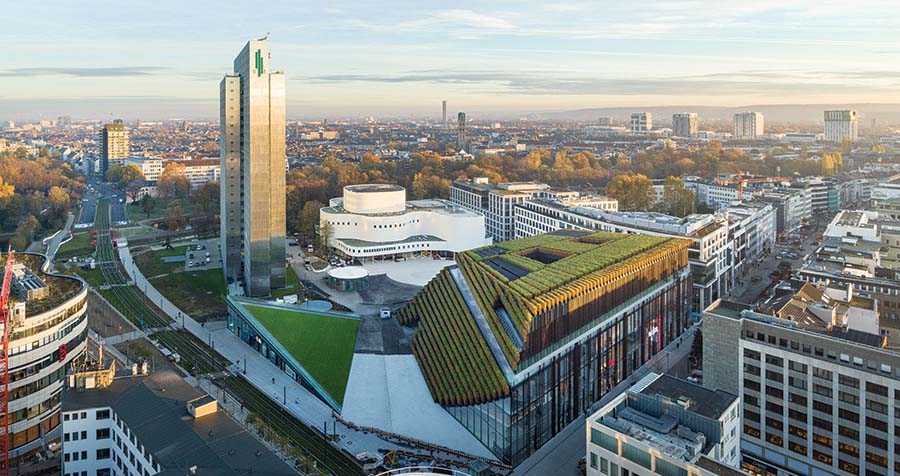 Ingenhoven Architects has just finished renovating the theater’s exterior and its public spaces. The building is considered one of the most important works of Bernhard Pfau, an architect active in commercial and residential design in Düsseldorf after World War II, but with few public commissions. As Ingenhoven explains, Pfau was not part of a clique of architects sympathetic to the former Third Reich, who remained influential, even after the war. The architect’s expressive design for the Schauspielhaus (literally, Show Playhouse) was chosen in 1959 through an international competition that included an entry from Richard Neutra. 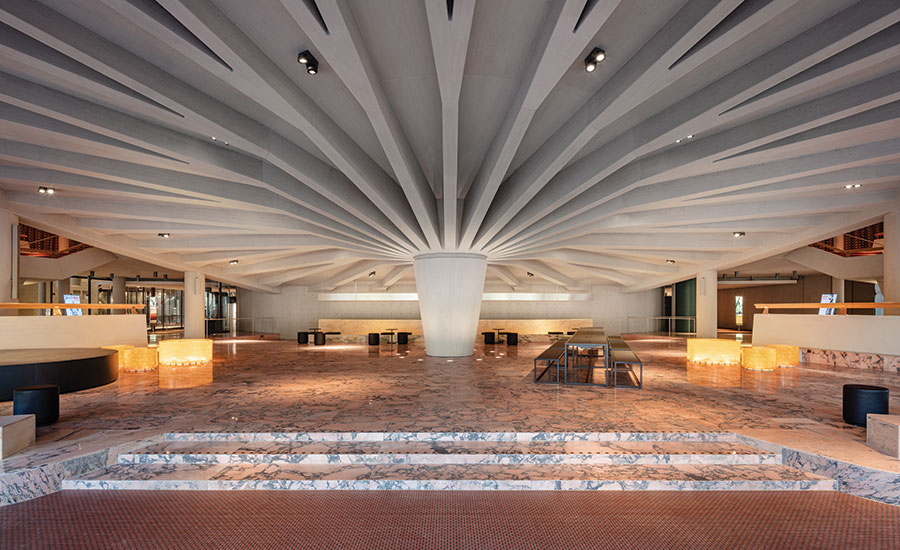 An umbrella-like central column with radiating beams extends over the lobby, supporting the raked seating area of the main auditorium above. Photo © Hans-Georg Esch

Although designated a landmark in 1998, before the recent refurbishment, the building had long suffered from neglect. Its steel cladding had rusted and its roofs deteriorated. The interior—except for the two performance spaces, which had been renovated in 2011—were dreary, due to misguided maintenance practices and unsympathetic modifications. In the lobby, for instance—where an astonishing umbrella-like central-column and radiating-beam structure extends 130 feet to support the raked seating of the main auditorium above— the board-formed concrete had been covered with layer upon layer of paint. Some of the rose-colored Portuguese marble floor tiles had cracked. 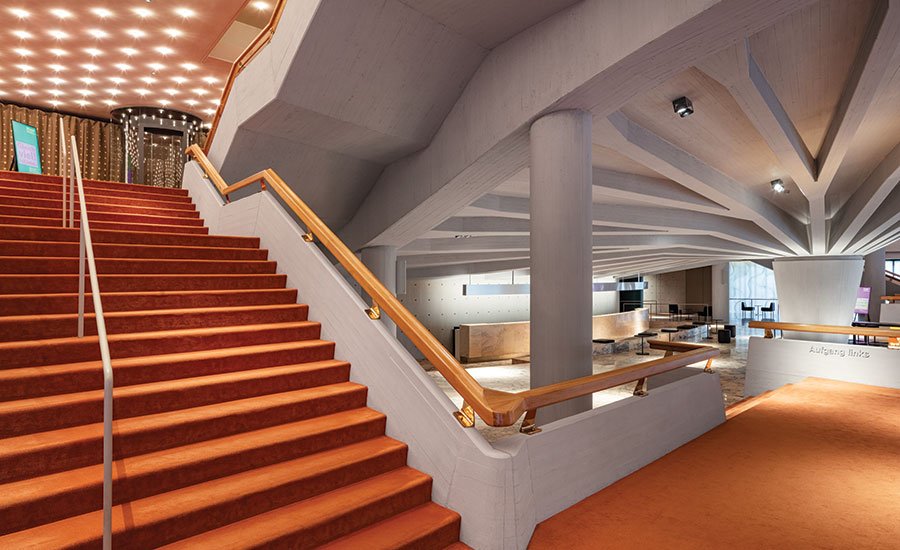 Concrete surfaces, seen from the stair to the second-floor gallery, have been covered in a protective wash. Photo © Hans-Georg Esch

The Schauspielhaus sits in a part of Düsseldorf that has been a focus for Ingenhoven for decades. Since the early 1990s, he had been advocating for the removal of a nearby 1970s-era elevated highway. It sliced through the urban fabric, dividing the Hofgarten in two and cutting off the theater and the adjacent tower from much of the city. In part due to Ingenhoven’s efforts, the roadway was demolished in 2013. His firm subsequently won an international competition for Kö-Bogen II. Completed late last summer, the retail-and-office building, which borders the Gustaf-Gründgens-Platz, is enveloped in hornbeam hedges, making it seem like outsized topiary. And now, just a few months later, Ingenhoven Architects has finished the theater renovation, across the plaza.

The roughly $85 million project was performed under two separate contracts, one for the exterior and one for the interior. The outside was a city project, and public procurement guidelines stipulated that the lowest bidder be hired. Because Ingenhoven was so keen to renovate the building, he submitted a successful low offer. The interior work, however, was done with private funds, mostly from one donor, and not subject to competitive bidding restrictions. 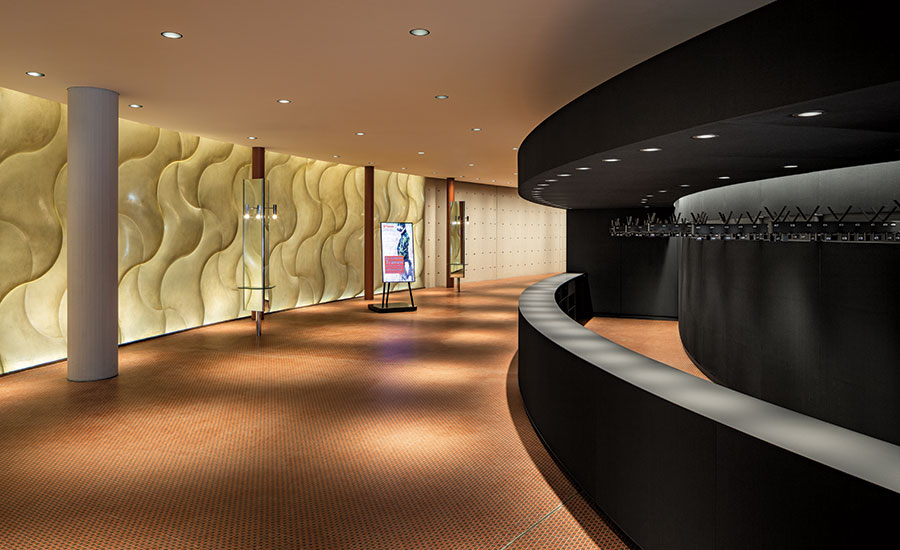 Substantially altered elements, such as a coatroom, are differentiated from original construction with black finishes. Photo © Hans-Georg Esch

The Schauspielhaus had not been built entirely to Pfau’s competition-winning scheme. For instance, Pfau envisioned the main entrance on the north facade, from the Hofgarten. However, the city planning office insisted on placing it on the plaza, combining it with a box office and an entry to underground parking. Ingenhoven describes the resulting one-story appendage as a “plug pressed into a bottle.” Since it was original—though not part of Pfau’s competition entry—Ingenhoven had to persuade preservation officials that it should be removed. He eventually convinced them, and ticketing, along with parking access, is in a freestanding pavilion at the western edge of the plaza. “There, it is part of the city,” says Ingenhoven.

Other aspects of the exterior’s renewal included replacement of its curved steel panels, along with their substructure. The new cladding, which is Z-shaped in plan, replicates the original but is made of aluminum, and meets current thermal standards. The theater’s ground floor has been opened up to its surroundings by swapping out the original bronzed glazing for clear, low-iron glass. “You couldn’t see in or out before,” says Ingenhoven. Still to come are green roofs for stormwater management and urban heat island mitigation. Though not accessible to building users, the planted areas will be visible from the upper floors of the Dreischeibenhaus tower. 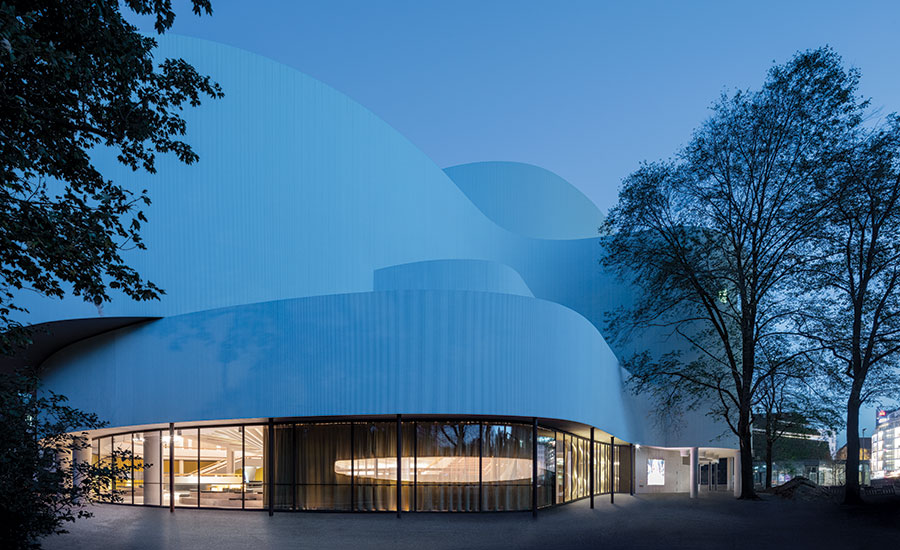 Inside, the renovation team removed the layers of paint from the “umbrella” and other board-formed concrete elements. Though structurally sound, their surfaces were prone to shed dust, necessitating the application of a semitransparent wash that allows the imprint of the timber formwork to come through. Contractors replaced damaged finishes, such as broken floor tiles, obtaining the marble from the original quarry in Portugal. The architects reconfigured the coatrooms, restrooms, and other support spaces, distinguishing them from original construction with black finishes, including paint, fabric, and steel. As a way of providing privacy and improving acoustics without altering the building’s tectonics, Ingenhoven commissioned curtains from Amsterdam-based designer Petra Blaisse. One of these—of golden velvet with peekaboo cutouts—can be drawn across the lobby glazing to dampen noise and prevent patrons from being distracted by their own reflections at night. The building systems, most visibly the lighting, have been updated.

One can easily envision theatergoers milling about the lobby, around the sculptural column with its sweeping beams, seeing and being seen during intermission. For now, though, the theater is dark, closed in the surge of the pandemic, after a brief reopening season this past fall. But, with the building’s luster restored and the surrounding precinct practically reinvented, this corner of Düsseldorf is ready and waiting for post-Covid life. 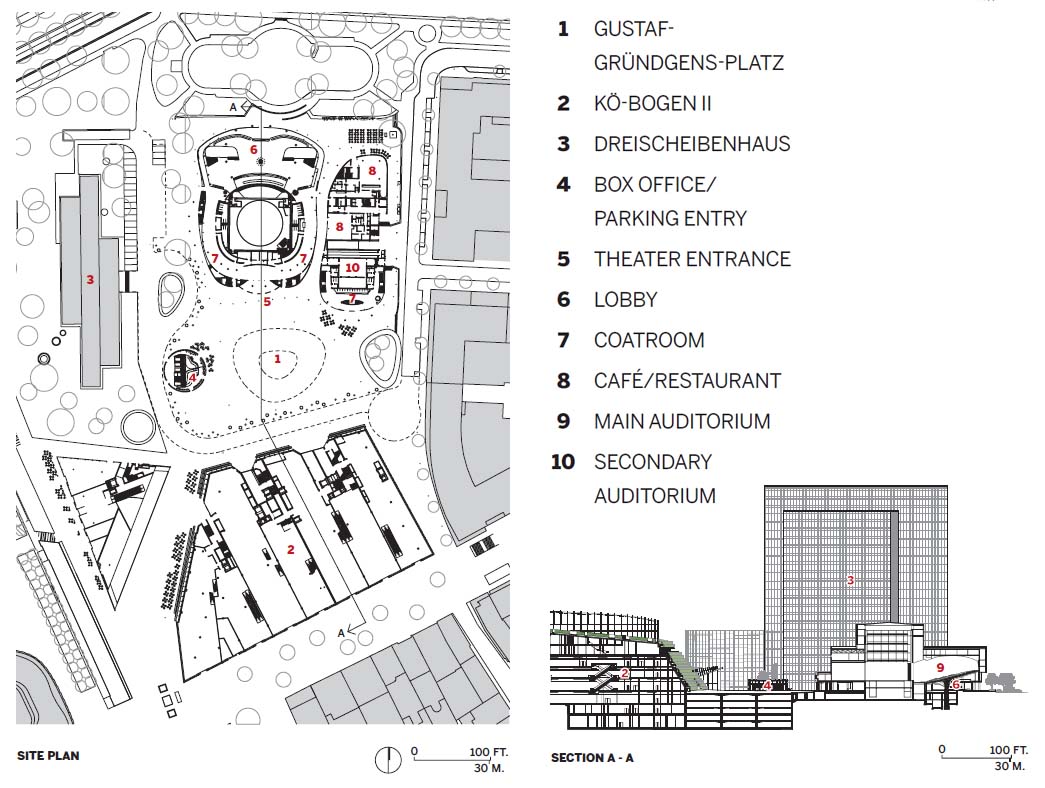