The vibrant city of Stuttgart has long been a strategic commercial hub, nestled in southwest Germany and home to companies such as Bosch, Mercedes-Benz, and Porsche. Its rail infrastructure is vital to local and regional mobility, and a major upgrade has been planned since the early 1990s. Stuttgart21, as it is called, includes four new stations, 40 miles of tunnels, and 44 bridges at a cost of $9.75 billion. The centerpiece is the new main station, designed by Christoph Ingenhoven (founder of Düsseldorf-based Ingenhoven Architects) with the late Frei Otto, the 2015 Pritzker Prize laureate known for his experiments with lightweight structures. The team was chosen after a competition in 1997.

The brief was challenging. Stuttgart’s inner city is oriented roughly north–south in a valley, with an existing terminus train station at its northern tip. The Neo-Romanesque edifice by Bonatz and Scholer, completed in 1928, has 16 aboveground tracks, and the competition called for creating a through station with half as many tracks, rotated 90 degrees from the existing ones and sunk below grade through new rail tunnels parallel to the northern facade of the old station. The realignment will shorten travel and transfer times, allow for a direct airport connection, and locate Stuttgart on a Paris-to-Budapest rail link. After completion, in 2025, the aboveground tracks will be replaced with a residential district for 10,000 inhabitants. 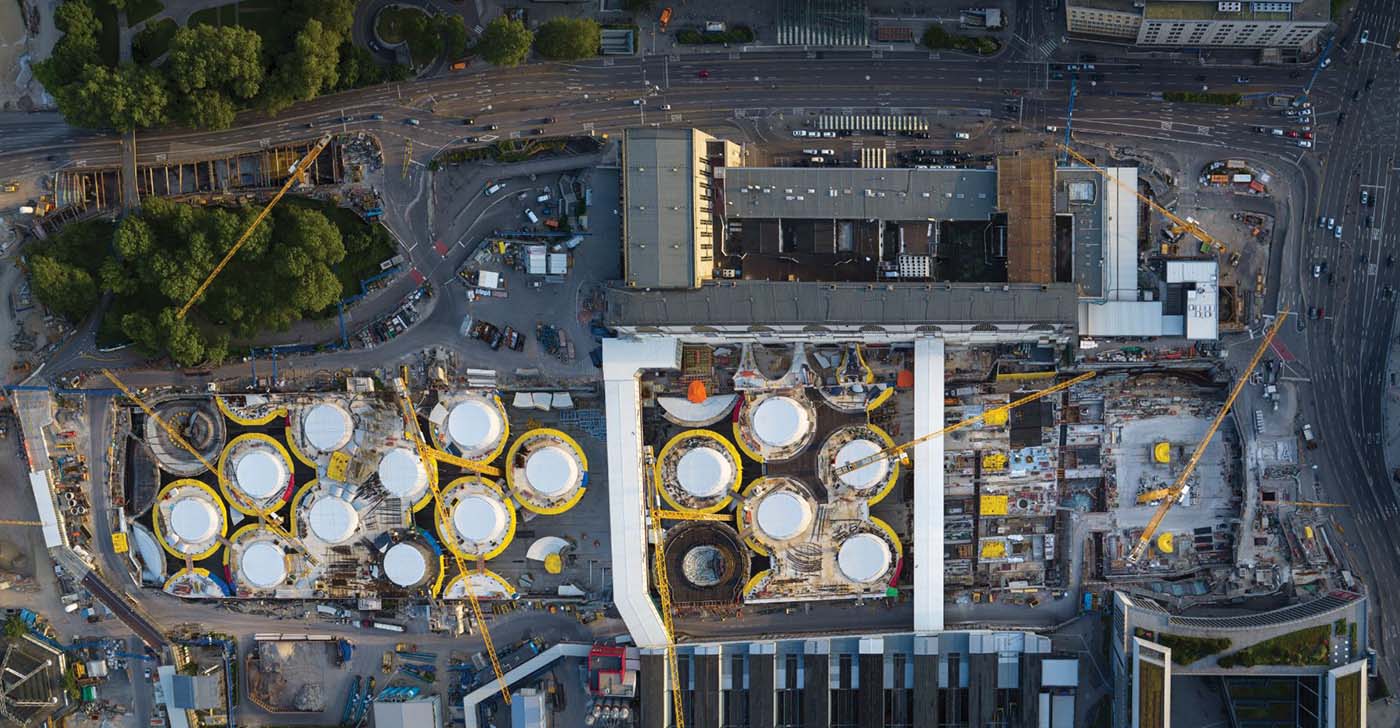 The ambitious project includes submerging tracks below level under a roof supported by 28 of the distinctive columns (1), about half of which have been completed (2). Images © Ingenhoven Architects (1), HG Esch (2), click to enlarge.

Ingenhoven and Otto were an unusual pairing. At the time of the competition, Ingenhoven was launching his career with large buildings that featured innovative approaches to sustainability, such as the 1996 RWE Tower in Essen, while Otto was the acknowledged pioneer of lightweight tensile structures. Previously, they had collaborated on a scheme for an ecological skyscraper, the Commerzbank Tower in Frankfurt-am-Main, a commission that ultimately went to Sir Norman Foster. For Stuttgart21, Otto’s role was scientific support for development, design, construction, and structure.

To enclose the below-grade tracks and expand the station, the architects rejected a tall structure, noting that cool air from the surrounding hills falls to the valley at night, and a high building would inhibit this flow. They proposed a low, naturally illuminated station hall, measuring 1,475 feet by 260 feet, with several entrances at the shorter sides. Above, a new plaza and park would be a part of continuous 10-acre public area. 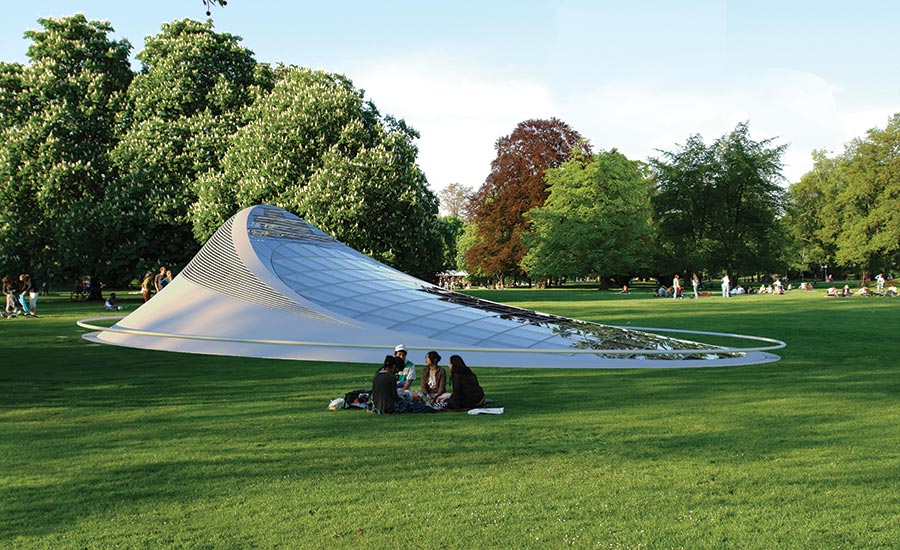 A park above the station will be part of a continuous 10-acre public area. Image © Ingenhoven Architects

Experimenting with plaster and tensile-skin models, they designed a structure that appears both dynamic and transcendent. A field of giant oculi, angled to face south, cover the roof. On the interior, the bottom rim of each oculus stretches down to form a column, directing a cascade of natural light along its surface. Due to the immense loads, the scheme was developed for reinforced concrete, with engineering by Büro Ted Happold (Berlin) and Leonhardt, Andrä and Partners (Stuttgart). And, though the original train station was a protected monument, the design called for retaining only its main section and tower, for offices, shops, and an entrance, while its north and south wings were to be demolished.

The project initially languished, finding renewed impetus in the early 2000s. In 2009, Frei Otto left the team (he died in 2015). In the same year, the Stuttgart-based Werner Sobek—who has conducted research on lightweight materials with minimal structure, and with a computer-assisted design approach integrating architecture, engineering, and sustainability—became the chief engineer.

But more obstacles and controversy lay ahead. Demonstrations against Stuttgart21, which had been taking place for years, gained momentum, with protestors decrying the high costs, the years-long inner-city construction site, potential environmental damage, and the partial demolition of the original station, among other issues. In late September 2010, the conflict escalated; after the police used pepper spray and water cannons to clear peaceful protestors who were blocking the tunnel construction, the public was outraged. Not long after, in scheduled elections, the regional government, led by the Christian Democrats, who supported the project, was voted out and replaced by a coalition headed by the Greens, who were opponents. A referendum in November 2011, however, was decided in favor of continuing Stuttgart21. Ironically, the current regional government, with the Greens in charge, is overseeing the station’s completion.

The polarization and unrest put additional strain on those developing the project for construction. The greatest challenge, says Sobek, “was the extremely high level of geometric complexity of the calculations that were being carried out while the very negative public reception to the project was at its height.”

Soon, this tumultuous period may fade from memory, replaced with awe at the station’s arresting interior. In February 2021, ceremonies celebrated the completion of half of the 28 delicately unfurling, chalice-like reinforced-concrete columns. Along with the two 1,475-foot-long, 19½-foot-high reinforced-concrete side walls, the columns support the station roof, which is designed as a reinforced jointless shell with variable thickness, depending on the strain. The columns are narrow at the base and expand upward like a finely sculpted cone, with a convex southeastern side and concave northwestern one. At the roof, they have a diameter of 100 feet, half of which is taken up by the round, angled skylight, now called a Lichtauge, or light eye. 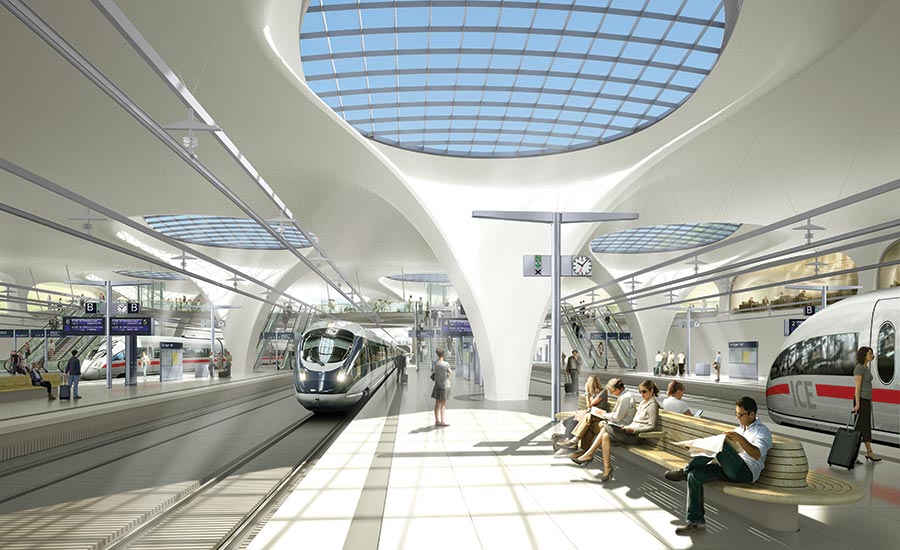 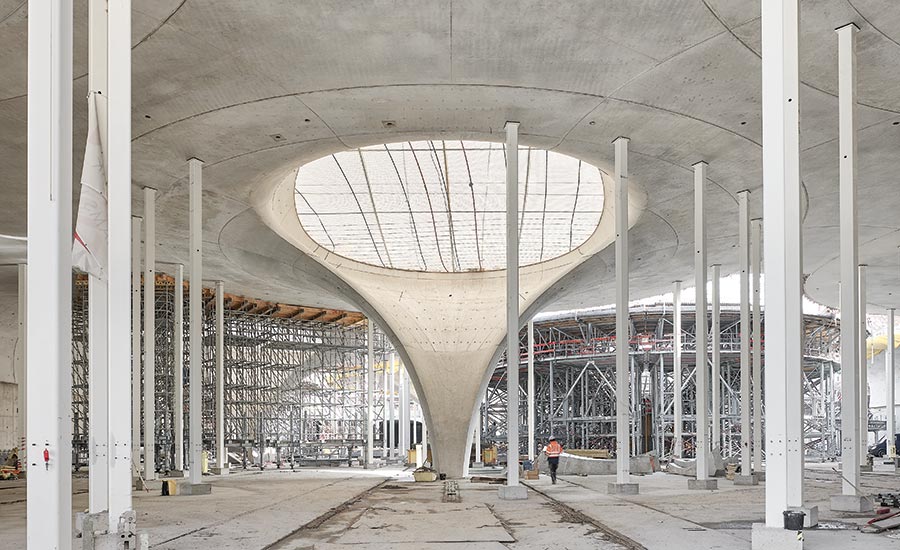 Varying in height from 30 feet to 39 feet, each column is unique due to its location and performance, and 3-D digital models were employed to optimize and calculate the forms. Their aesthetic and structural demands necessitated a reversal of typical construction methods. Each column requires between 22,000 to 32,000 rebars, which are fabricated in a special facility in Esslingen, transported to the site, and then precisely configured to describe the chalice-like form. Their positions are controlled via laser projection, which compares the positions of the rebars to a digital model of the reinforcements. Then the rebars are enclosed in custom-built wood formwork. To achieve a nonporous and joint-free surface, the forms are coated with specially developed resins; they are also recycled for various positions on the site. During the pouring, a moderate use of vibrators and a highly fluid concrete mixture insures that any voids and the areas around the dense rebars are reached. Per column, the construction time is three months, requiring 750 tons of concrete and 350 tons of steel reinforcement. 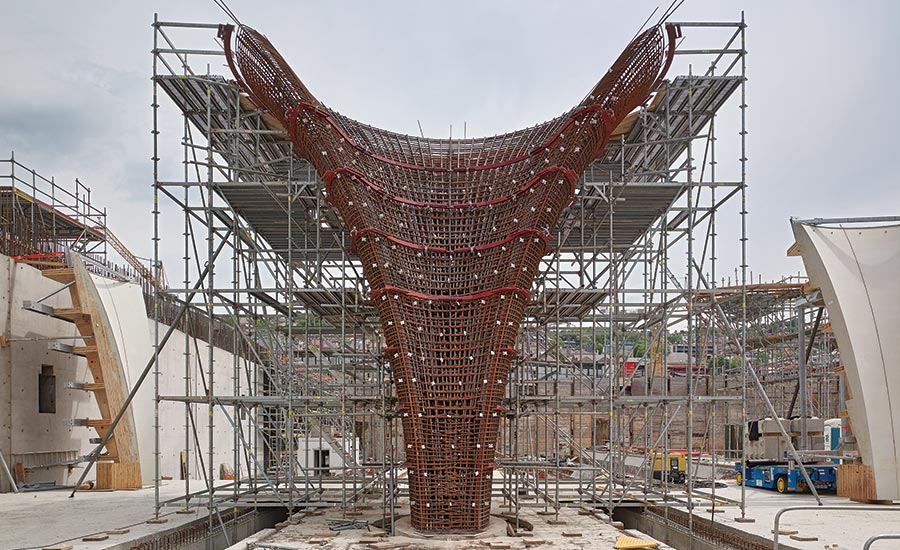 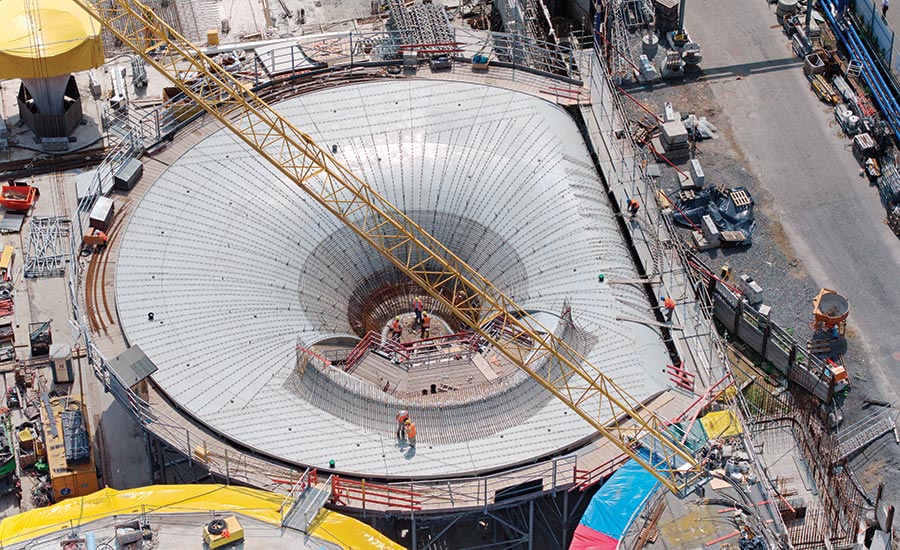 The rebars, up to 32,000 of them in a single column, are precisely placed via a digital model and laser projection (7). Resin-coated formwork helps produce the desired concrete surface (8). Photos © Achim Birnbaum

A special concrete mixture consisting of white cement, granulated slag (a by-product of iron manufacture), and fine plastic fibers was developed to satisfy the columns’ complex geometry and the fire-protection regulations for exposed concrete. When poured, the material has a dull pewter hue, but after it oxidizes, the surface lightens “and becomes the luminous train station that we all desire,” says Ingenhoven.

The columns also contribute to the station’s “zero energy” concept, meaning electricity is not required for ventilation, heating, or basic lighting. During the day, the Lichtaugen illuminate the station’s interior; at night, the concrete’s pearly white surface reflects the luminaires on the tracks. Meanwhile, the movement of the trains brings air from the tunnels, where there is a constant temperature of 62 degrees Fahrenheit, into the station. The moderating effect of the massive construction and the below-grade location will keep temperatures between 50 and 77 degrees Fahrenheit, while louvres in the Lichtaugen provide ventilation. Solar panels on the roof of the old station will supply some electricity for signage, supplemental lighting, and elevators and escalators.

With completion of the new Stuttgart main train station scheduled for 2025, a cautious optimism pervades: “It is like halftime in soccer,” says Ingenhoven. “We are leading with 2 goals to 0, but we still have a long, difficult path ahead. There is still a lot of exciting stuff to come.” 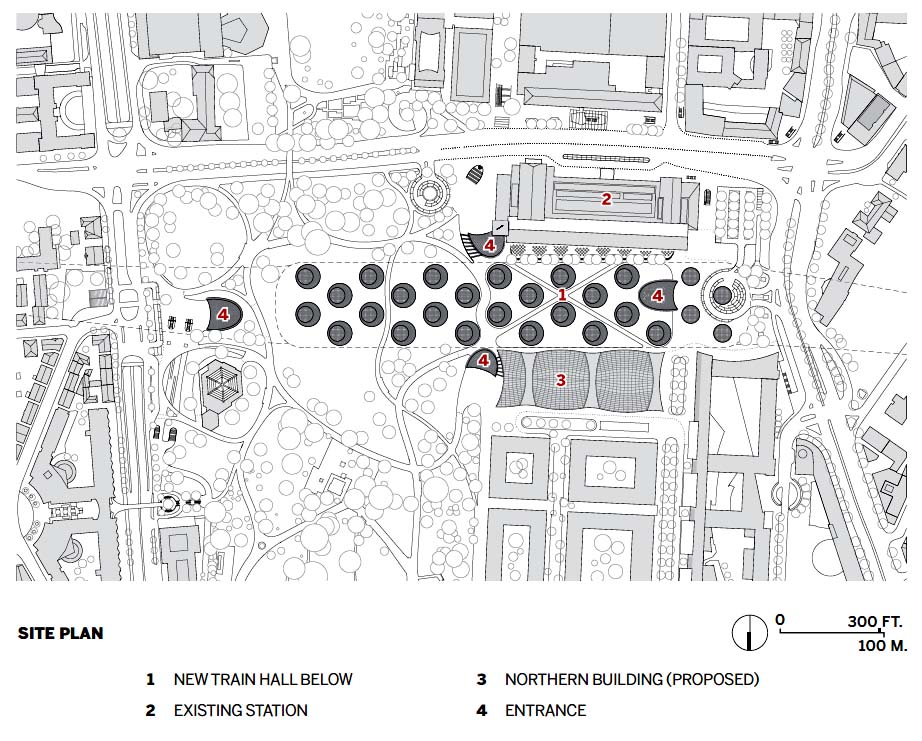