At the height of ski season in the Swiss resort town Verbier, in years past, crowds have roared for the athletes competing in the Patrouille des Glaciers, while in summer the hills have come alive with an eponymous classical-music festival. Hammering and sawing never interrupt these soundtracks, because local regulations forbid building during peak tourism periods. So, when a long-standing client of Alessia Mainardi purchased a three-bedroom, three-bath apartment in Verbier in early 2019, the London-based interior designer had to strategize a redo that would need to be completed within a three-month construction window that fall.

The 20-year-old residence encompasses just under 1,100 square feet and flows onto almost as much terrace overlooking the Val de Bagnes, and Mainardi imagined refinishing the apartment with expanses of natural materials that echo the dramatic mountain landscape. “You don’t necessarily want to see skis hanging on the walls, or feel too much like you’re on Christmas holiday,” the designer says of refreshing the residence, which the husband-and-wife owners now occupy throughout the year.

Starting with the bathrooms, Mainardi knew that stone slabs would embody the appropriate narrative and mood. Yet because the renovation schedule was so truncated, the designer could not presume there would be time enough to demolish and measure the existing bath interiors, draw templates, and fabricate new surfaces. “You never know how many millimeters you’ll have behind the walls,” Mainardi says. She instead determined that stone tile would be more forgiving of whatever unforeseen conditions awaited her September 1 start date. 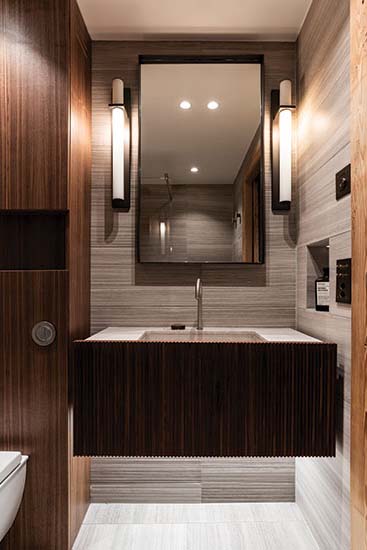 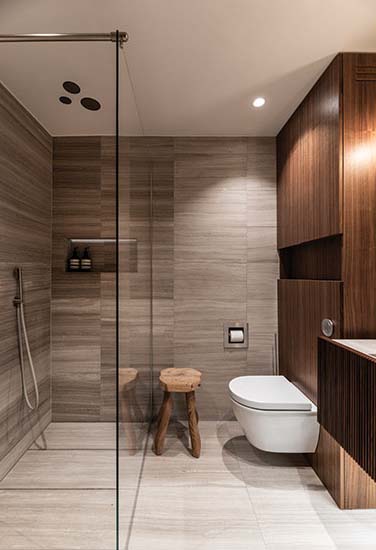 The designer sourced the bathrooms’ marble tiles and sinks from an Italian manufacturer. Photos © Vito Corvasce, click to enlarge.

Since the three bathrooms averaged 50 square feet each, Mainardi also decided to make the spaces appear larger by pairing her stone selections to a limited palette of other materials. For the primary bathroom, Mainardi clad surfaces in large-format Silk Georgette-marble tiles; on the walls, the cream-colored stone features fine parallel grooves that lend a tactile quality to the toilette experience without disrupting visual continuity. For even more of a tie-in, Mainardi sourced a wall-mounted sink in the marble from the same manufacturer. This vanity includes an apron of walnut-veneer ribs, in response to which Mainardi integrated walnut-veneer casework to conceal the tank of a wall-mounted toilet.

Mainardi revised that approach just slightly for the apartment’s two other baths, selecting the dark, richly veined Gris du Marais marble and, for the showers, substituting a fixed glass partition with return-layout glass enclosures with blackened framing. “Gray counteracts the yellow in the wood, and provides contrast to the primary bathroom,” Mainardi says of the color swap. Even so, she adds, the three spaces have more commonalities than differences: “Everything is natural, while the detailing is very contemporary and polished.” Integrated lighting beneath the vanities underlines their cantilevered forms, illuminated storage niches are tucked into the walls at multiple points, and puck-like wooden trim packages and other bath fittings are modestly sized and minimalist in shape. 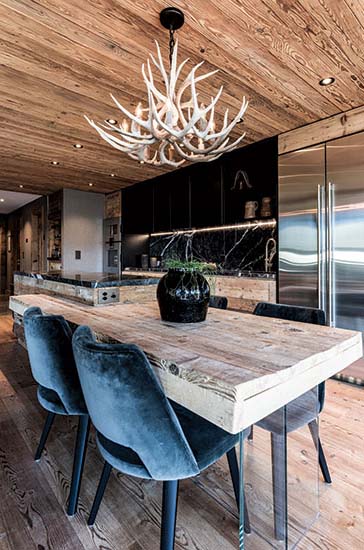 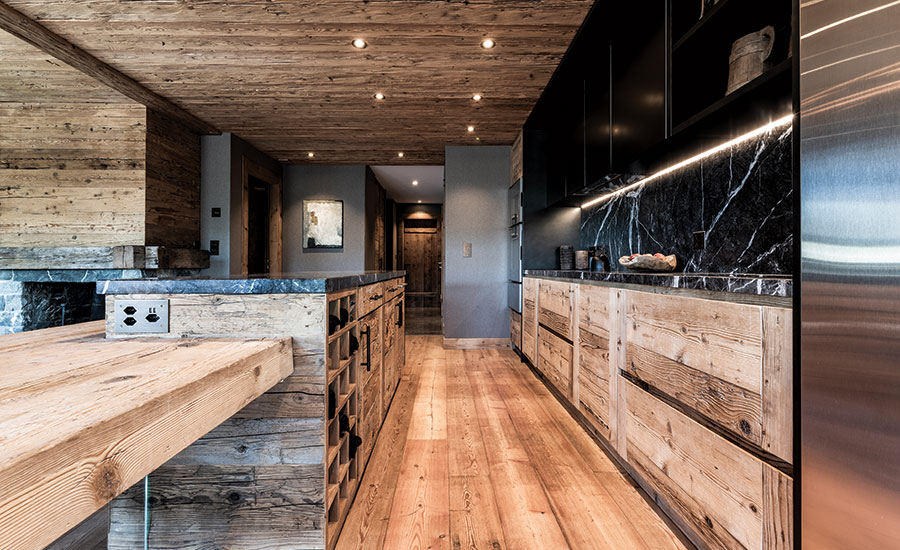 The rustic scheme of the newly refurbished kitchen places the bathrooms’ refinement in stark relief. To complement the apartment’s existing timber surfaces (the 20-unit building has the appearance of a giant chalet), the designer combined aged wood with Grigio Carnico marble and matte bronze, punctuating the composition with stainless-steel appliances. Open to the living room and surrounded by terraces, the kitchen serves as a powerful variation on Mainardi’s nature theme. Together, however, the designer says, the kitchen and baths offer a singular lesson to anyone craving high design built in a short period—namely, that it is possible. “There is so little time for implementation here that people try to avoid hassle. Many of the residences have the same tiles, the same kitchen, the same everything,” Mainardi says. “I wanted to show that you can design for speed and not sacrifice a more personal expression.” 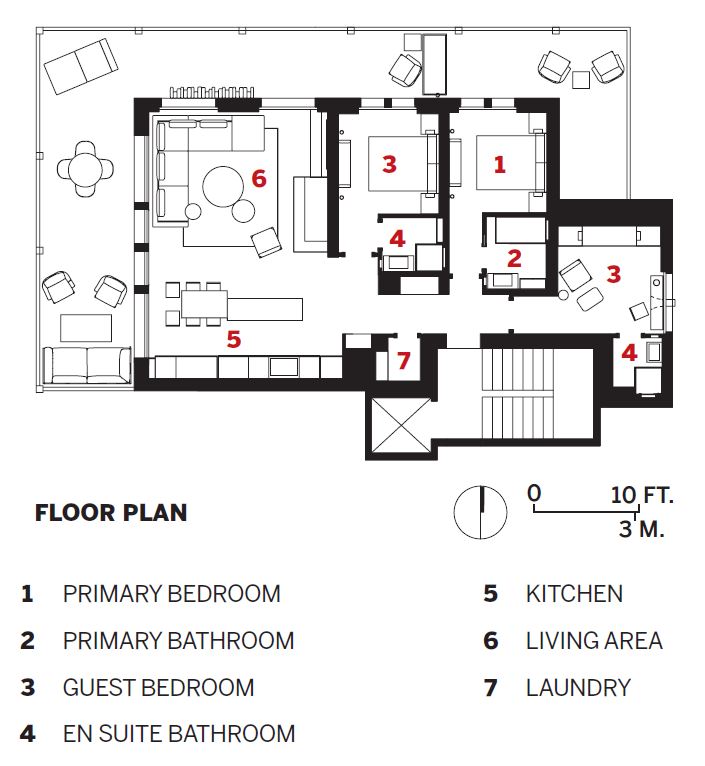