In 2016, Helsinki produced a city plan designed to prevent urban sprawl. It designated Verkkosaari, the former docklands to the northeast of the city center, as a new area for development. A subsequent document defined a site at its heart for the Urban Environment House: an integrated home for the planning, housing, and environmental departments, previously spread out across Helsinki. That detailed document specified a skewed L-shaped building that would enclose two sides of a city block to form an internal courtyard with a neighboring structure. It required the building be set back from the street on one side, to create a public space along one route in the neighborhood, and set a height of eight stories, to mediate the scale between tall residential towers on one side and a lower district of converted slaughterhouses on the other.

Designed by Finland’s preeminent architectural practice, Lahdelma & Mahlamäki (LMA), designers of the Museum of the History of Polish Jews in Warsaw, the Urban Environment House achieves its pragmatic goal of creating enough office space for 1,500 local government employees, in a modestly scaled urban core. It also accomplishes more ambitious aims, living up to its name as a model for well-designed urban redensification, while serving as an exemplar of sustainability, as a near–net zero building. 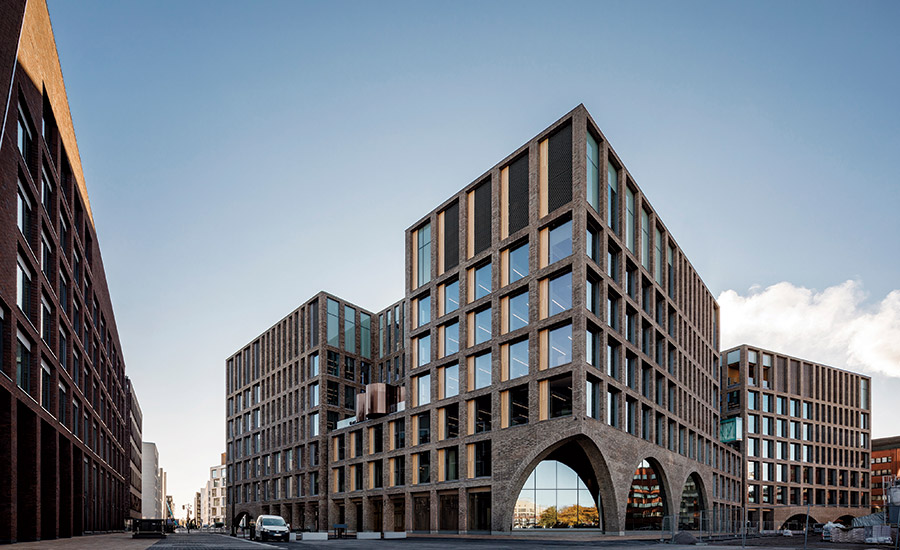 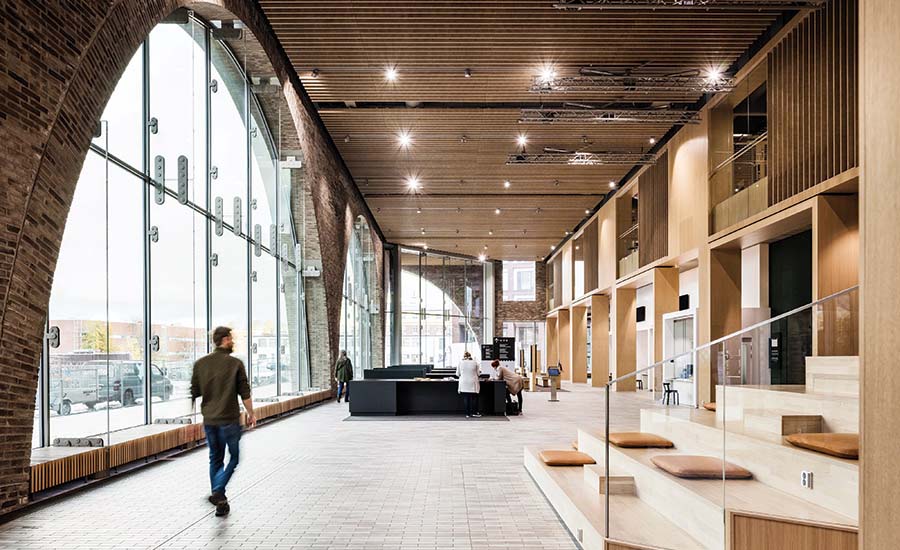 Broad arched windows at the base connect the interior with the city (1 & 2). Photos © Kuvatoimisto Kuvio, click to enlarge.

Despite the many restrictions that could have confounded lesser architects, here LMA managed to create a surprisingly artful civic edifice. Because of the L shape and certain design strategies, the 440,000-square-foot, primarily brick building appears less massive than its actual size. The colonnade running along much of the base satisfies the requirement for a street setback while creating an urbane public amenity. The graceful low brick arch dominating the northwest corner, which leads to the main entrance, makes a simple civic gesture to a new urban square, albeit in the idiom of 19th-century industrial architecture that typifies the area.

The building within is welcoming, but with a quiet grandeur. The first two floors of the concrete-framed structure are largely given over to public functions: exhibition space, a one-stop shop for various permits, an auditorium for planning meetings, a restaurant, and a cafeteria. 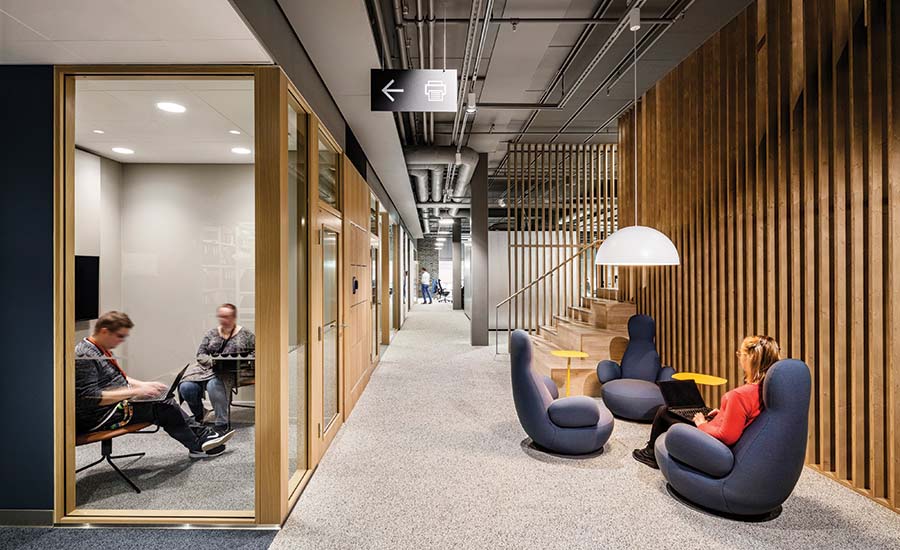 Although it is new construction, the Urban Environment House evokes a converted warehouse. To accommodate the complex program, LMA increased the depth of the floor plates from a local average of around 40 feet to nearly 100 feet. To help overcome reduced daylight penetration, the ceiling heights were increased from the usual 12 feet to 15 feet, giving the interiors a loftlike feel. Terraces, facing the street, have been carved from the volume of the building, two at the third level and two at the fourth, effectively creating voids that cut through the floors above.

Not only do the terraces provide outdoor space for occupants and introduce daylight, the voids further help break up the building’s mass. This strategy is enhanced by the architects’ handling of the materials prescribed in the planning document: brick as the facade’s primary material, along with copper and wood. Using the secondary materials, LMA has skillfully detailed the windows and subtly differentiated sections of the building. 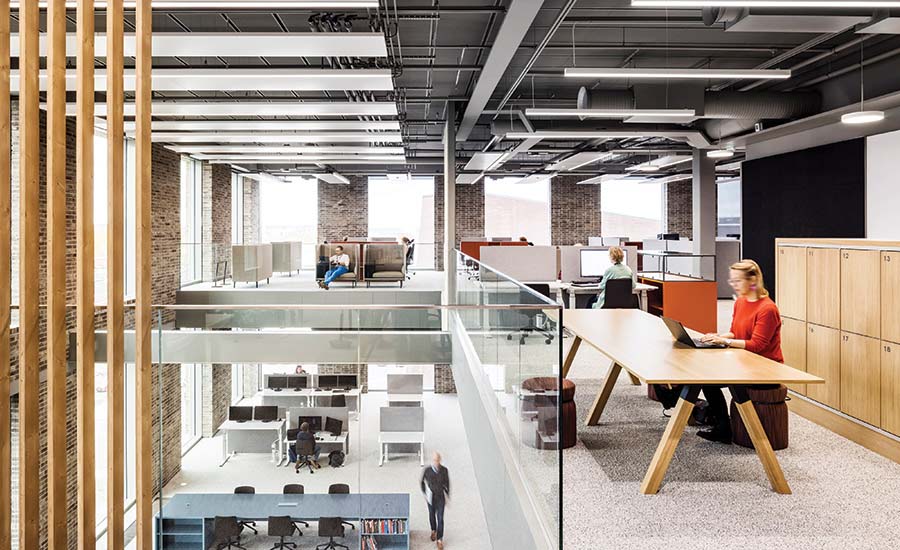 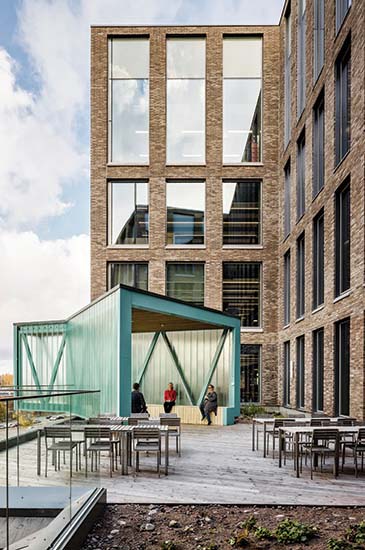 The terraces, though, are the key to the Urban Environment House. On the north facade, for example, the terrace is the starting point for an internal street that runs south through the building on each floor. Around this spine are placed meeting spaces and shared facilities like cafeterias and kitchens.

By slicing vertically through the building’s bulk, those on the interior who are near the terraces can see the floors above or below. In addition to these external incisions into the volume, LMA has cut through the deep floor plates elsewhere, forming double-height interior spaces and creating a sense of openness and visual links between floors.

These visual connections would be meaningless, though, if the architects had not created a separate identity for each floor, preventing the anonymity and bureaucratic sameness that often pervade government office buildings. A themed color scheme differentiates each floor, in a nuanced way. The theme for the fourth floor, for instance, is “field and meadows,” with plenty of wood furniture and beiges, burnished reds, and browns for the carpet and upholstery. About 60 percent of the desks in the building are reused from previous offices—reconditioned where needed—and around 20 percent of the meeting room furniture, including some designed by Alvar Aalto. Each space in the building looks and feels different.

The furniture reuse is just the kind of high-impact, low-cost strategy that a planning department should be promoting—and, as the Urban Environment Division of the City of Helsinki, it had to meet performance standards for public buildings in place since 2019. Among its features are a highly insulated envelope and heat recovery, with energy demands satisfied by on-site solar panels, nearby renewable sources, and the district heating and cooling system. In addition, the building’s 55,000-square-foot roof, a green space featuring more than 22,000 plants, is designed as both a pleasant outdoor area and a laboratory where the experimental growing will be closely monitored and will inform planning advice going forward.

With the Urban Environment House, LMA has created an impressive piece of bureaucratic infrastructure, and done so within an incredibly tight urban site; they’ve designed a spacious and daylight-filled working environment, with a core of generous shared facilities that is also welcoming to the public. If we are determined to redensify our cities, the Urban Environment House is the kind of building we will need to create. 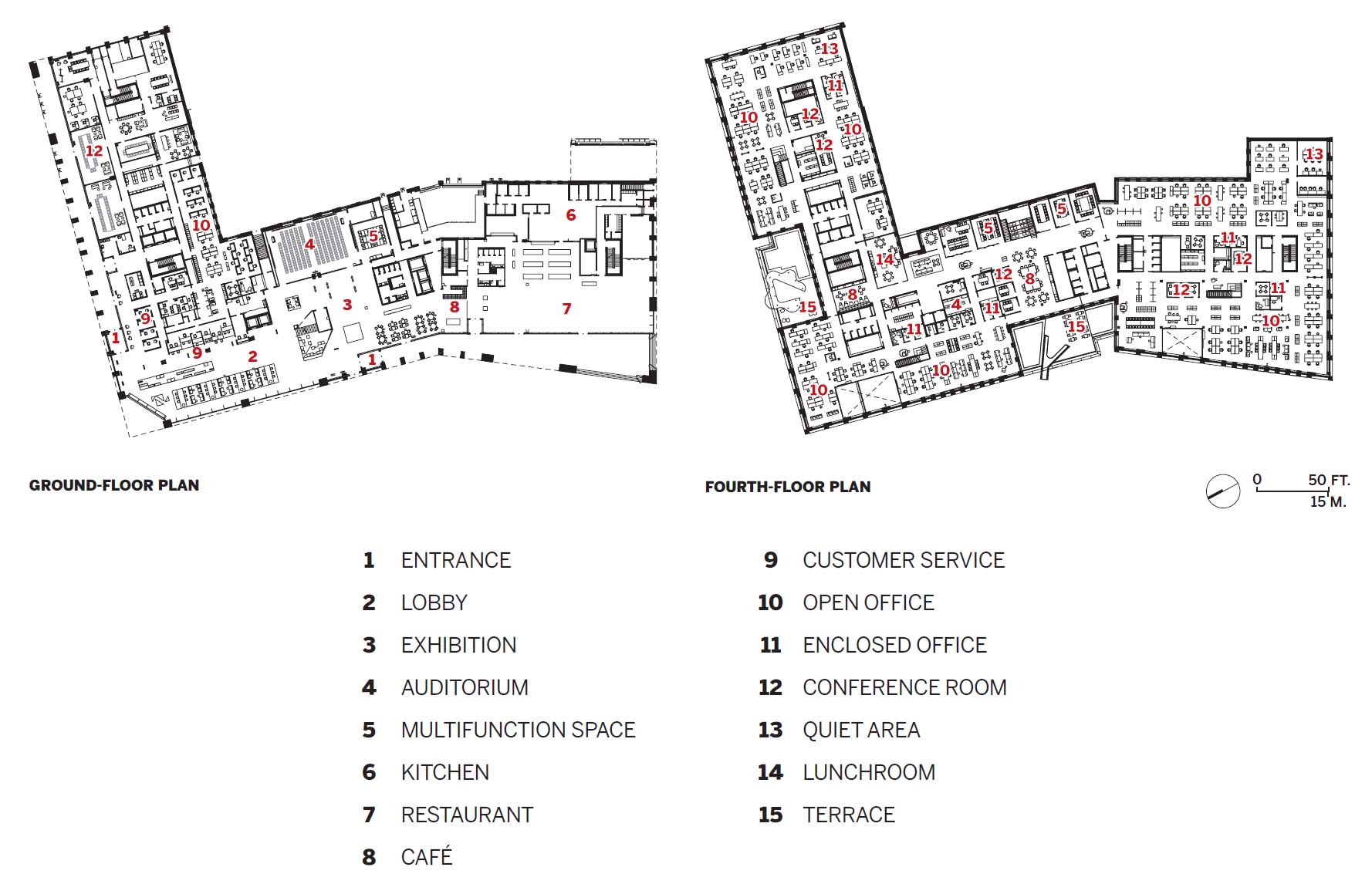