Remnants of the Jurassic era, the rock formations known as “sea stacks” anchor some of the moodiest vistas to be found along the Oregon coastline. The wind, rain, sand, and salt that shaped them are often still hard at work. Sunny, breezy days have made the beach town of Bandon one of the U.S.’s premier golfing destinations. But when the gales come, summer or winter, their force can almost blast the paint off a car. 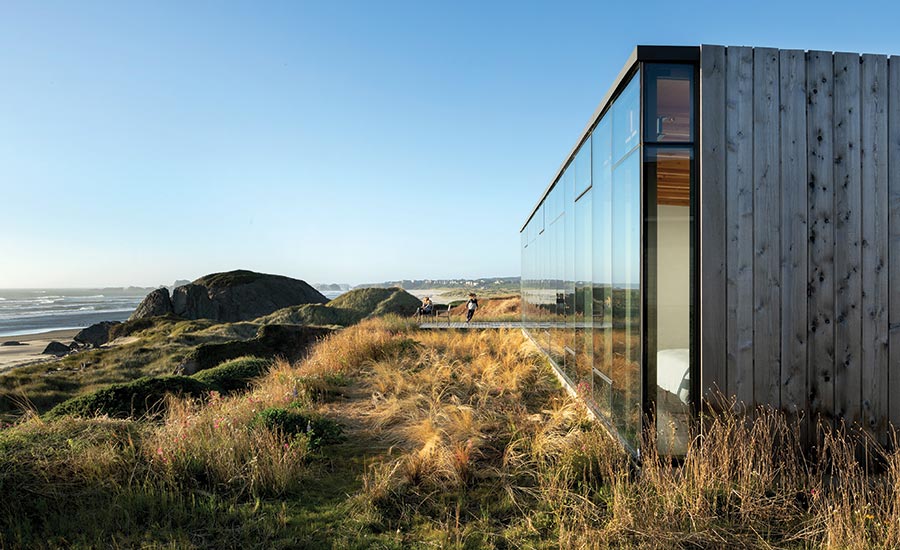 The built environment of this stretch of the coast can be equally harsh, visually. Large, multigabled “beach houses” slot into narrow lots like Monopoly pieces. For one of the few remaining oceanfront residential sites, James Cutler designed what he calls a “house in pieces”—a square form that unites three volumes with a courtyard, with the western face sheathed entirely in glass. The compound reaps the rewards of the view while shielding it from the toughest elements, natural and manmade. “The goal was to keep the architecture as quiet as we could,” he says, while “building it like a tank.” 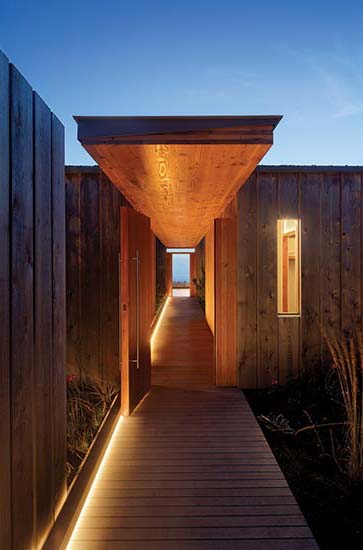 On the opposite side of the house, a walkway cuts through the bedroom wing and the courtyard to the oceanfront area. Photo © Jeremy Bittermann

A “modernist building cloaked in native materials,” as Cutler describes it, the house has 1-inch-thick-by-10-inch-wide cedar planks wrapping three sides to create a form so minimal it could be mistaken for a tall fence. But step inside the bright Douglas fir door and a procession unfolds, contracting and expanding in visual breaths. Beyond a narrow vestibule, you find yourself outside again, on a walkway of cedar two-by-fours (topped by a 5-by-48-foot CLT roof), which hovers over a courtyard carpeted in clover. Through another fir door, the main living space appears to merge, sublimely, with ocean waves and sea stacks through a 15-foot-high curtain wall of glass. 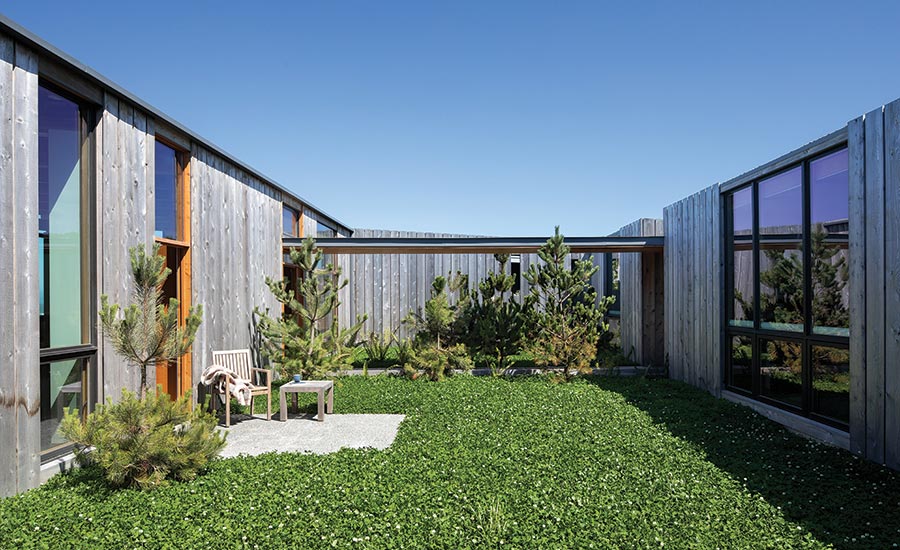 In the middle of the house is the open courtyard, protected from winds. Photo © Jeremy Bittermann

“With that view, the effect is much like Dorothy opening the door in The Wizard of Oz,” Cutler says. “Things go from black-and-white to Technicolor.”

The architect got the idea for the open-air connection of the living spaces from the 80-square-foot cabin next to his Bainbridge Island house near Seattle that he built some years ago for, and with, his then 10-year-old daughter. For Cutler, its distance from the main house yielded an epiphany. “What I discovered is, it’s no big deal to walk 35 feet, whether it’s snowy, rainy, or cold,” he says. 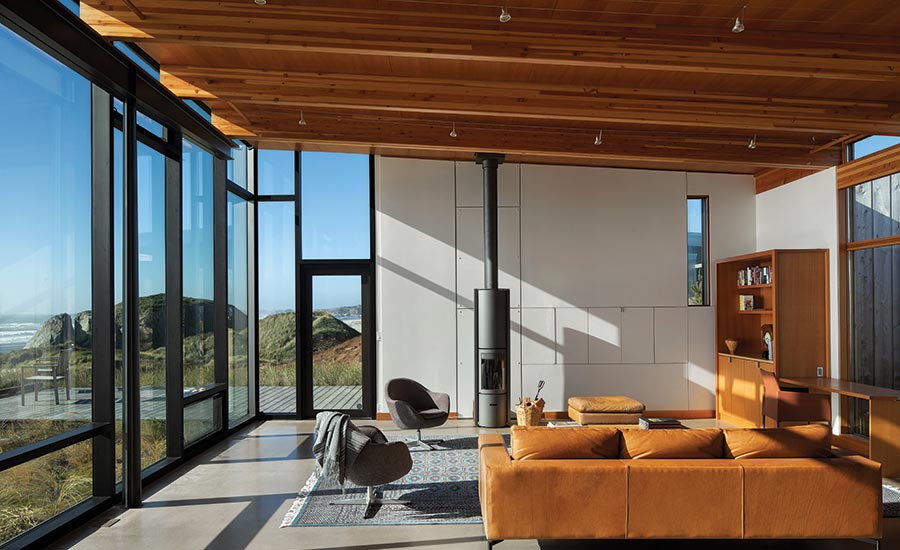 One corner of the living area seems like the prow of a ship. Photo © Jeremy Bittermann

In plan, the Bandon house is essentially a 62-foot square divided internally into four components: the ocean-facing ensemble of the living/kitchen area and main bedroom; the courtyard; and the rear bedroom volume, all united by the boardwalk. Beachside, the curtain wall’s full 62-foot length levitates over the landscape, supported on pilings, with particularly uncanny elegance at night. The optimal view from inside, Cutler argues, is “two-thirds sky and one-third object”—the latter, in this case, the sea stacks and the ocean beyond. To achieve the proportion, the architect sloped the ceiling at a gentle 1-to-12 pitch. 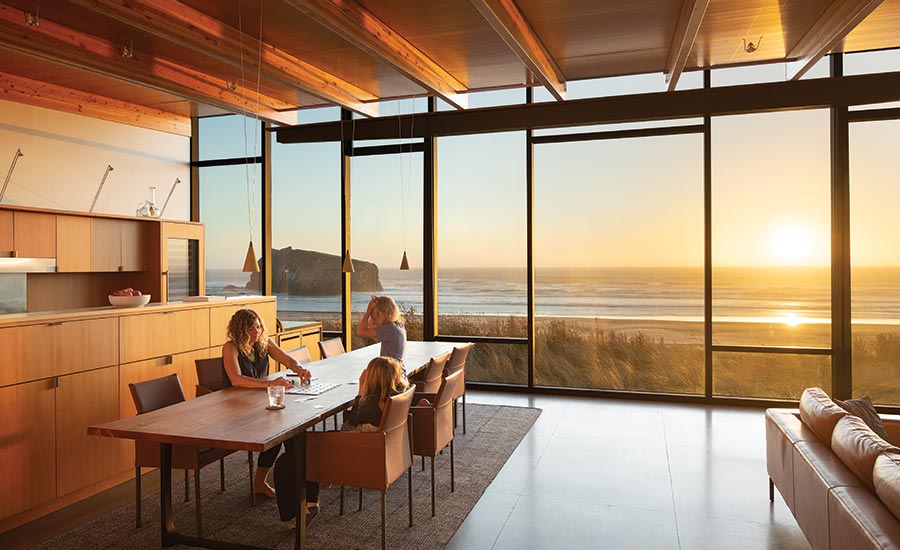 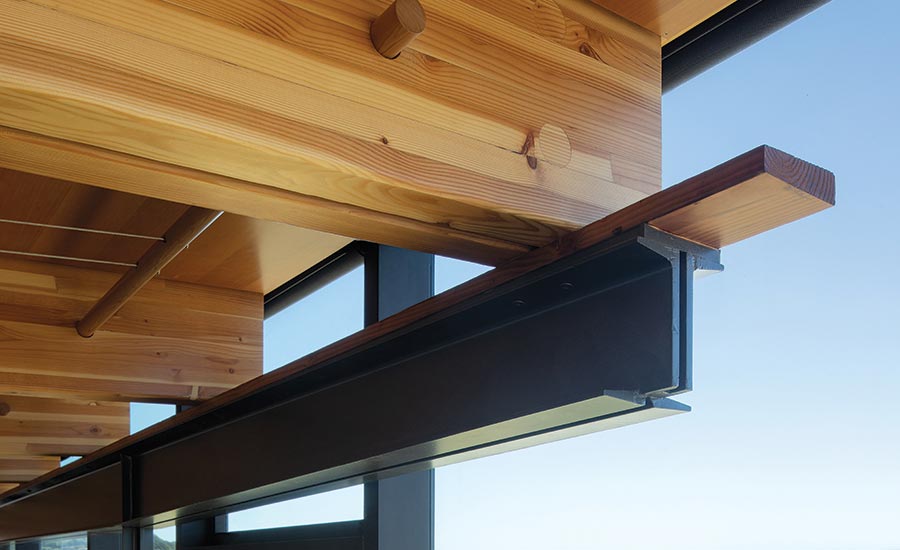 Steel and post beams support the wood timber-frame ceiling (1.) The construction opens up views of the ocean for the living and dining area (2). Photos © Jeremy Bittermann

Cutler’s use of a fully integrated curtain wall when he retrofitted the LEED Platinum Edith Green-Wendell Wyatt Federal Building in Portland, Oregon, in 2013, inspired his inclusion of it here. Operable windows that can perform as high as 400 feet in the air, he says, are well matched to Bandon’s “caustic” storms. To limit obstructions to the view, the ocean end of the ceiling is lifted on steel posts and beams, the latter cantilevered and tapered at the ends to visually express the load. Cutler’s years of matchmaking wood and steel members in so many of his projects led him to stretch a 12-inch-wide shim, precisely milled on-site, to fit the angle between beam and rafters. Other such carefully integrated moves range from salt-resistant bronze flashing to the narrow vertical windows seamlessly fitted between some cedar planks on the house’s sides. While architecturally astute contractors are not abundant in Oregon coastal towns, Cutler says, his builder, Tom Harmon of Coos Bay, was as skilled as any he’s worked with. The landscaping—which the architect designed himself—offers an equally careful fit of the house’s strict geometry to the soft contours of the site. 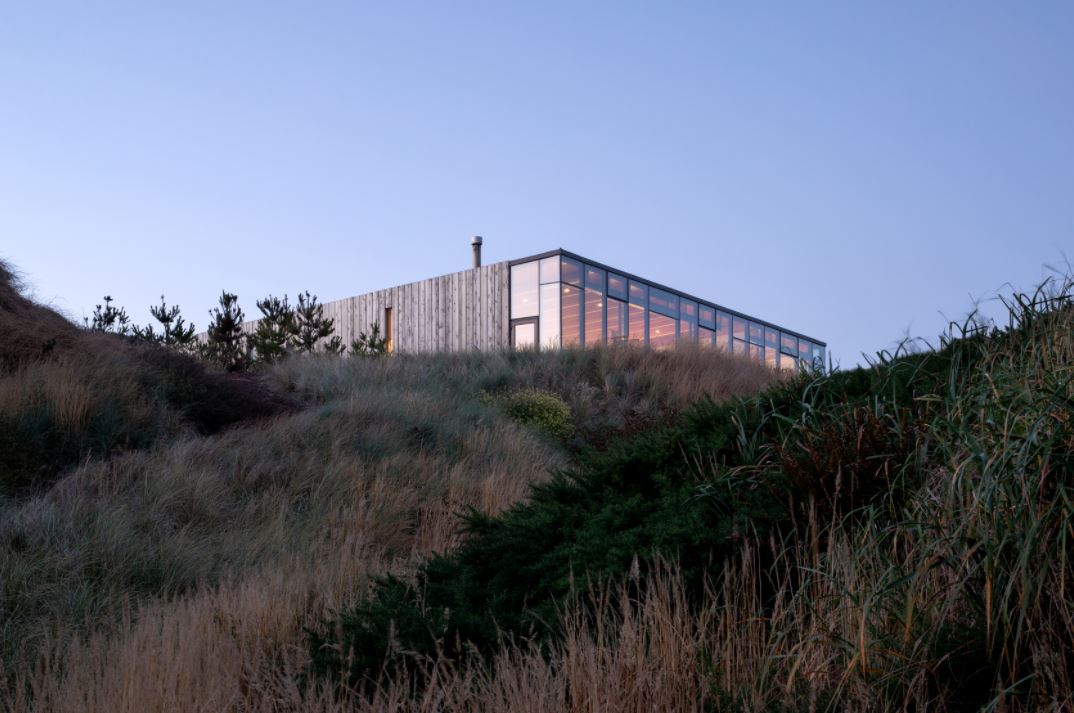 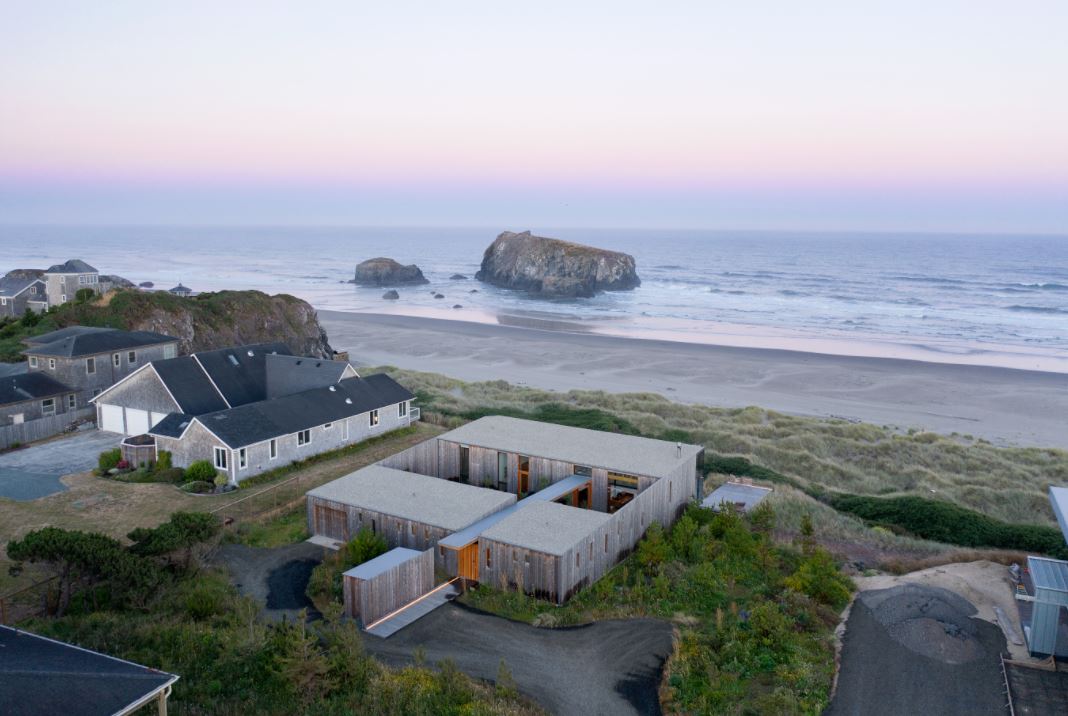 The house-in-pieces offers socially pragmatic advantages, too—“space for family dramas,” Cutler says, noting his own family of six. With frequently visiting kids and grandkids, the Bandon couple were the first clients who let him try this parti. The result, he feels, is “one of the top two or three houses I’ve ever done.” Despite the normal designer/client tug of war over costs (the curtain wall gobbled 20 percent of the budget), Cutler and the family became close enough friends that he has guest privileges. During a recent stay, the space between living areas worked as planned. On a clear but blustery night, the architect, with his daughter and cabin collaborator, now 16, enjoyed a courtyard-protected view of meteor showers.

“The experience was just terrific,” he says, “another visceral way to connect people to a vital, active planet.”

Tasklighting:
Desk lamp by All Modern.

Dimming System or Other Lighting Controls:
by Lutron