The chic seaside village of Zapallar is known as “the Hamptons of Chile.” A 2½-hour drive from the capital city of Santiago, Zapallar has wide, sandy beaches. But, unlike the Long Island enclave of villages about the same distance from New York, it is dry, very windy, and mountainous.

Alejandro Reyes, a lawyer from Santiago, found a half-acre of land overlooking the Pacific on the small, narrow peninsula called Punta Pinte (“tip of the wind”) as a site for a family weekend retreat. But he wouldn’t buy the property unless the architects Santiago Valdivieso and Stefano Rolla would elevate the house high enough to see the sea to the west, the large bay to the east, and the forest to the south. 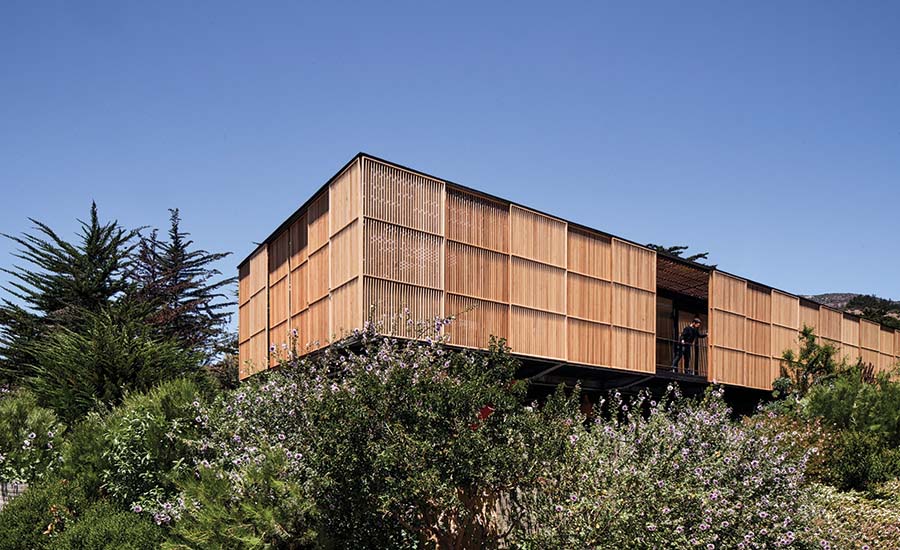 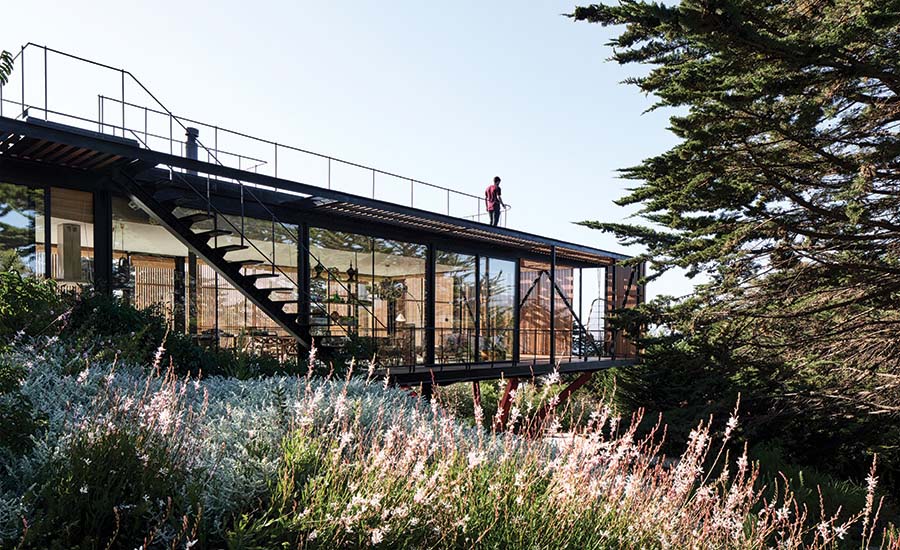 On the east side, the glass pavilion doesn’t have sliding shutters, but it has a stair leading to the roof deck.

“I wanted a minimalist house with very simple, clean, and pure lines, which would provide space for meditation, peace, and tranquility,” says Reyes, who has an artist wife and a daughter. “But I also wanted to maintain the privacy of the interior spaces without losing views of the sea, the vegetation, and the treetops.”

The architectural solution is ingenious—an elevated rectangular glass house with an outside shell of slatted rauli wood. The 1,700-square-foot steel-framed glass volume rests on steel pilotis, which take the shape of an inverse pyramid, to support the house where it juts above the land to the north. The wood floor, along with shutters and a roof, wraps around the glass volume on three sides, while the walkway continues on the fourth (east) edge; in total, this adds 1,500 square feet of space to the dwelling. “I tried to design an intermediate space that is neither the exterior nor the interior,” says Valdivieso.

The name, Engawa House, alludes to the porchlike feature found in a traditional Japanese dwelling. The slatted wall shutters can slide open to reveal the view or be closed to allow for privacy. “The lattice was an extraordinary architectural solution,” Reyes says. The slats produce dramatic shadows. “When the sun touches the wood, the light inside changes,” Valdivieso notes. “It also smells good; rauli is a sustainable Chilean hardwood that works well near the beach.” 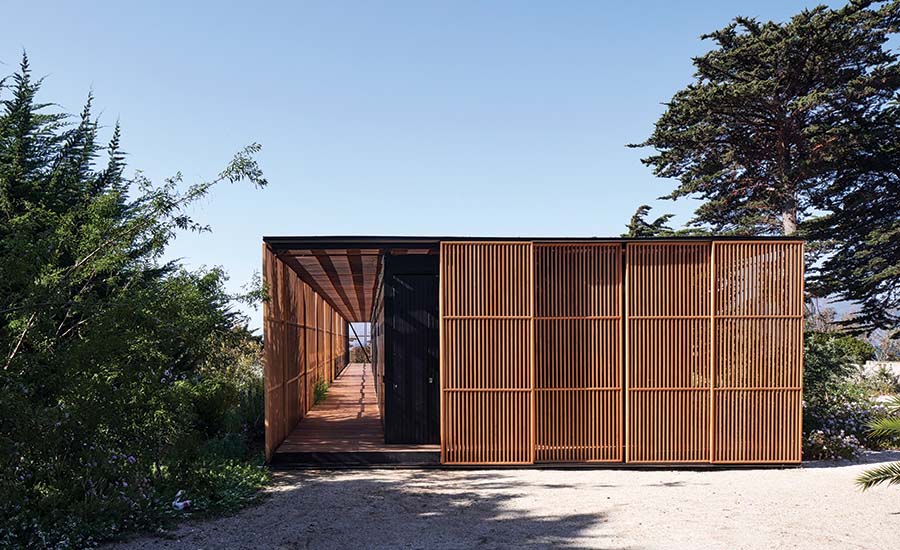 The west gallery leads from the south end of the house to the living areas on the north. 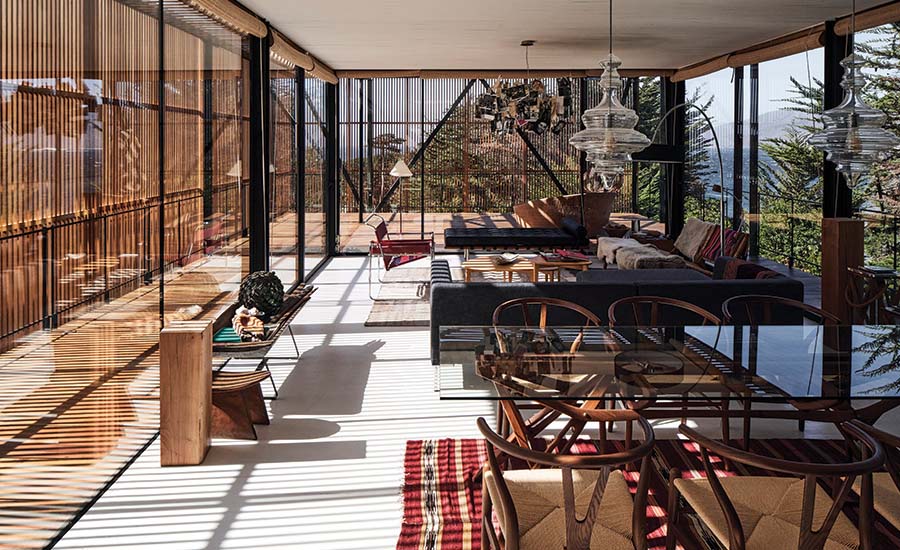 Inside, the living and dining areas have views in several directions.

The glass walls also slide open. “This is not a static house,” the architect adds. “It’s an agent for change, for performance.” 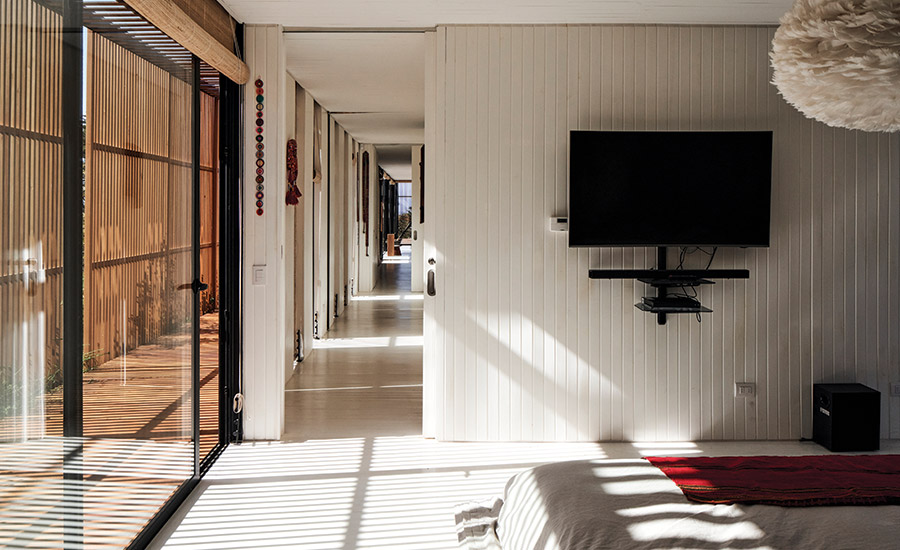 The bedrooms are arranged enfilade at the southern end of the house. Photo © Cristóbal Palma/Estudio Palma

The compact three-bedroom house is all on one level. The living room, dining room, and kitchen on the north are open-plan and minimally furnished, with the bedrooms placed at the southern (landlocked) part of the barlike rectangle. Underneath the end that projects to the north are a swimming pool and terrace, framed by the pilotis. And on top is a roof deck with 360-degree views.

Reyes is from a family of architects, including his grandfather, father, and brothers. “It was my desire to be the architect I was not,” says the satisfied client. “Valdiviseo and Rossa supported my interventions, opinions, and obsessions.” 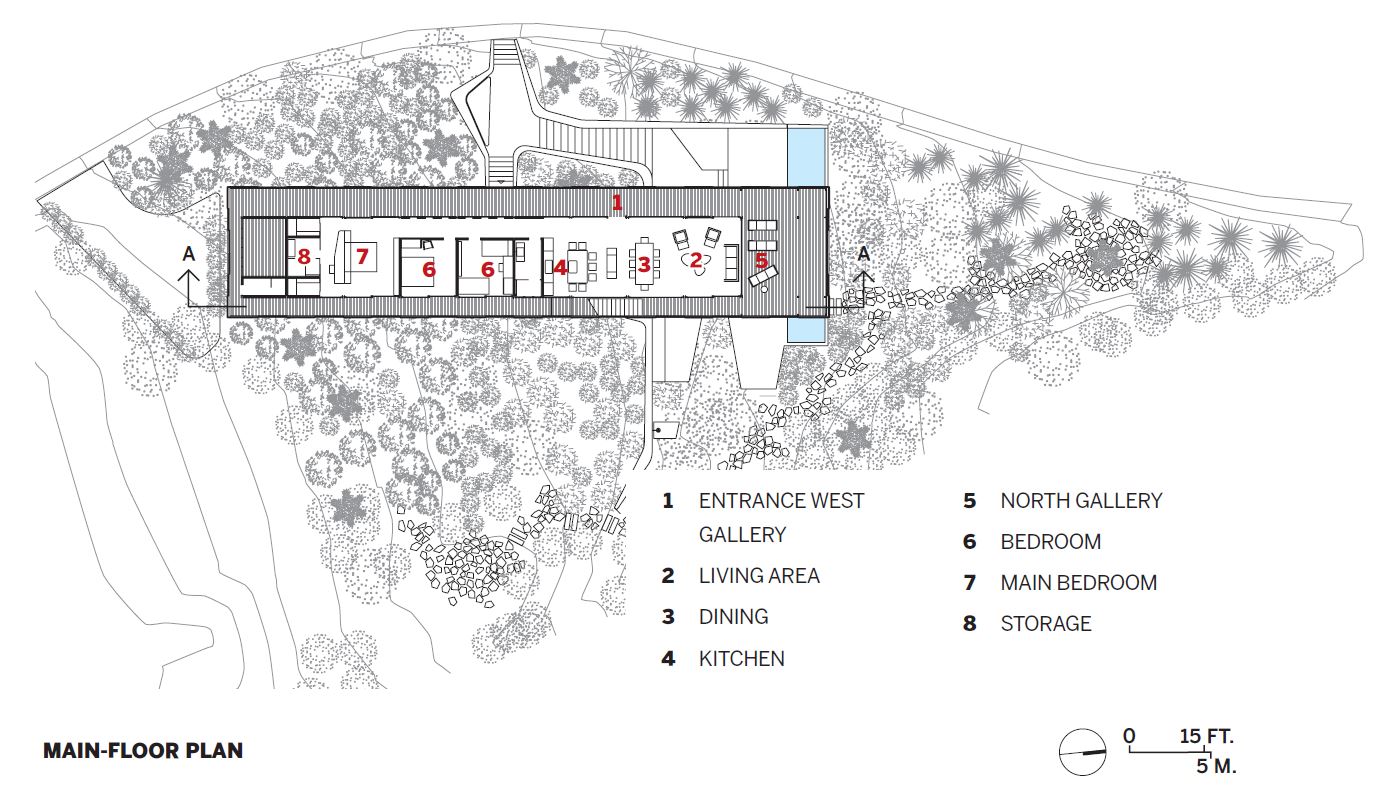