This website requires certain cookies to work and uses other cookies to help you have the best experience. By visiting this website, certain cookies have already been set, which you may delete and block. By closing this message or continuing to use our site, you agree to the use of cookies. Visit our updated privacy and cookie policy to learn more.
Home » Review of 'Building a new New World: Amerikanizm in Russian Architecture' and 'Avant-Garde as Method: Vkhutemas and the Pedagogy of Space, 1920–1930'
Architecture NewsReviews

Thinking about the historical architectural and technical exchanges between the United States and Russia might not seem like an important topic at the moment, suggesting as it does espionage, nuclear war, and disinformation campaigns. Yet both of these books offer much about the importance of design in a relationship that was once far from one-sided.

Jean-Louis Cohen’s Building a new New World: Amerikanizm in Russian Architecture is the latest academic book from the eminent New York– and Paris-based French historian of modern architecture and urbanism. Cohen offers a concise account of how Russian “Amerikanizm,” the perception that emerged there in the 19th century that the United States was an industrial civilization from which much could be learned, shaped a variety of Russian architectural and urbanistic efforts down to the 1970s. It is the companion volume to an exhibition that Cohen, who is fluent in Russian, organized at the Canadian Centre for Architecture in Montreal. It is also the third volume of Cohen’s rich archival documentation of the development of global modernity in the built environment, which began with his Scenes of the World to Come: European Architecture and the American Challenge, 1893–1960 (1995) and continued with his probing Architecture in Uniform: Designing and Building for the Second World War (2011). 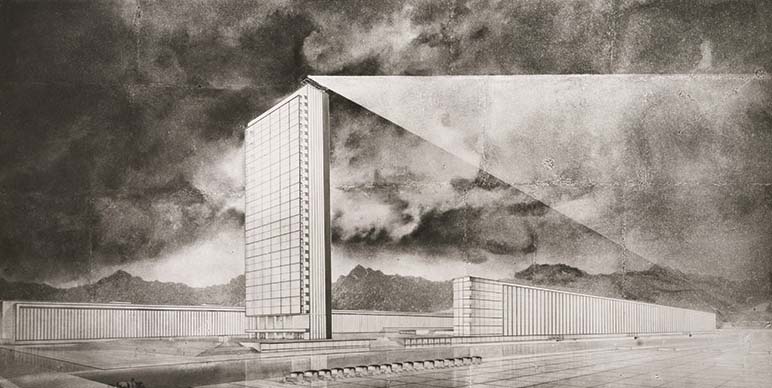 Organized into six sections that cover various periods of modern Russian history, and illustrated with many well-chosen photographs and architectural drawings, occasionally interspersed with advertising and propaganda posters, Building a new New World offers an overview of this vast topic in a compact format. Key episodes during the Soviet era, such as Lenin’s fascination with American industrial practices, and his genocidal successor Stalin’s subsequent commissioning of hundreds of large factories by Albert Kahn Associates of Detroit, are concisely described and amply illustrated here. So too is the Stalin-period effort to rebuild Moscow and other Soviet cities in the image of North American downtowns of the 1920s, which ironically occurred even as the regime extensively promulgated critiques of American racism and inequality. Cohen’s book also carries the story into the mid-20th century, after Stalin’s death in 1953, focusing on U.S. and Soviet Cold War technological competition, which involved such American design figures as Buckminster Fuller, Victor Gruen, and Charles and Ray Eames. 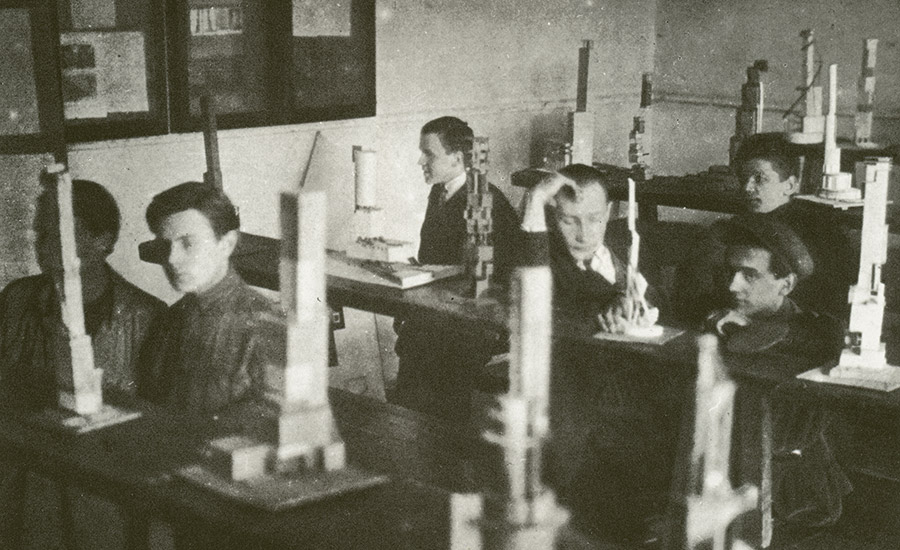 Avant-Garde as Method, by Anna Bokov, an emerging architectural historian at Cooper Union in New York, by contrast, explores one key episode in Modernism, the design education at Vkhutemas (an acronym usually translated as “Higher/Advanced Artistic and Technical Workshops”). This was a Soviet government art academy founded in Moscow after the Russian Revolution of 1917. While the Bauhaus, begun by Walter Gropius in 1919 in the liberal and socialist political atmosphere of post–World War I Germany, is generally seen as the school where modern approaches to architecture and design were first institutionalized, its Moscow counterpart is far less well known. Bokov’s comprehensive and richly illustrated account of Vkhutemas demonstrates that much of the teaching methodology associated with the Bauhaus was, in fact, first developed at this Soviet institution. With 2,000 students, it was much larger than the Bauhaus, and was directly supported by the central government. The Bauhaus, funded at the state level in Germany, was in its early years a socially inclusive and largely “Expressionist” institution, focused on craft production and individual artistic visions of a hoped-for future socialist German society. In response to the economic collapse of post-Imperial Germany, by 1923 such new Bauhaus faculty members as Laszlo Moholy-Nagy and Wassily Kandinsky, previously at Vkhutemas, introduced teaching methods and pedagogical approaches derived from Soviet avant-garde artistic culture. These were intended to put artists and designers in direct contact with industry, to make designs for the everyday objects and environments required by the new masses of industrial workers in modern industrial cities. Bokov’s large, well-illustrated, and painstakingly researched book is a definitive account of how what are now often known as “Bauhaus methods” were in some cases first put forward by Vkhutemas teachers. These included Nicolay Ladovsky, Alexi Gan, Alexander Rodchenko, and others who were, in many cases, inspired by the earlier abstract artworks of Kasimir Malevich. Bokov also documents how the Vkhutemas students, many from impoverished backgrounds and totally dependent on Soviet state support, were used as experimental subjects in various efforts to better understand the psychology of visual perception and the range of human design and spatial abilities. 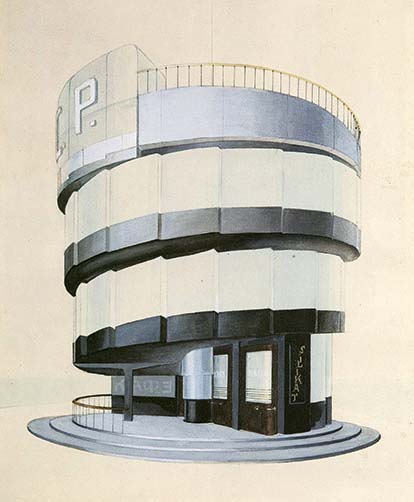 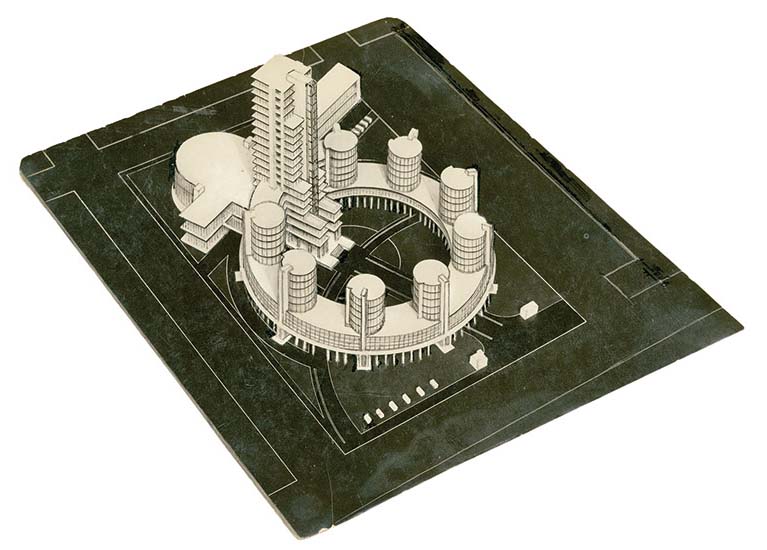 As a Soviet institution, Vkhutemas was unable to publicize its methods and activities in Western Europe and the U.S. in the 1920s (though Alfred Barr of MoMA visited there and wrote about it in 1928). It also lacked official approval for its avant-garde design approaches: Lenin, after visiting the school, remarked, “Well, I guess tastes differ.” Though Vkhutemas, reorganized as Vkhutein (Higher Artistic and Technical Institute), continued until 1930, by 1932, Lenin’s successor, Stalin, had made it clear that in his view, which became official Soviet policy until 1954, such avant-gardism was a symptom of Western bourgeois decadence. Instead, Stalin advocated “Socialist Realism,” a return to classical forms in art and architecture but with socialist content. The Moscow subway and the many urbanistic and industrial projects documented in Cohen’s book were the most immediate outcomes of this new policy. Even the most respected Vkhutemas design teachers were relegated to obscurity and, sometimes—as in the case of the influential graphic artist Gustav Klutsis—executed, on Stalin’s orders. Instead of taking a central role in shaping a new Communist society in the Soviet Union, perhaps the main outcome of Vkhutemas’s efforts was its strong influence on the Bauhaus and its many successor institutions around the world.

Although neither of these books offers a quick read, and some graphic-design choices in both books undermine aspects of their authors’ intentions, both provide direct access to an immense amount of archival material, much of it not previously available in any form.

Eric P. Mumford is professor of architecture at Washington University in St. Louis and author of Designing the Modern City: Urbanism Since 1850.