When the French architect Jean-Philippe Vassal was practicing  urban planning in Niger, West Africa, in the mid-1980’s, he observed people with very few resources assembling and inventing architecture with the everyday objects and the materials at their disposal. His partner Anne Lacaton, whom he had met at architecture school in Bordeaux, saw the same when she would visit him. “We understood that everything was important. There was no reason to waste anything,” said Vassal.

An ethos of looking to cities’ existing building stock and readily accessible materials as a place to begin their designs, from social housing, cultural and academic institutions, and urban schemes, is one of the reasons the Paris-based architects have been selected as the 2021 Pritzker Architecture Prize Laureates, the profession’s highest honor.

In its citation, released today, the Pritzker jury wrote: “The modernist hopes and dreams to improve the lives of many are reinvigorated through their work that responds to the climatic and ecological emergencies of our time, as well as social urgencies, particularly in the realm of urban housing. They accomplish this through a powerful sense of space and materials that creates architecture as strong in its forms as in its convictions, as transparent in its aesthetic as in its ethics.” 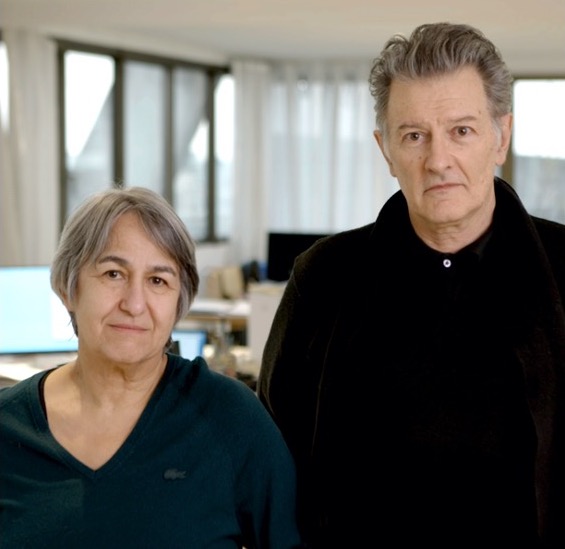 In a telephone interview, Lacaton, 65, and Vassal, 67, said that the practice of architecture, which often tethers designers to their offices and computers, can distance them from reality. “There is only one real dimension—where you see and speak with people,” said Vassal. “When you are in that dimension, urban planning and architecture are often very violent. The question of kindness and delicacy is, for us, essential: To take care of people in a very precise way. Architecture exists because life is inside. We try to give more freedom for people to be creative, to dream, because we think that quality of space is something important for each inhabitant.” Lacaton agreed: “It is the point of architecture to make space for life, for living—not representation.”

The idea of creating more space for comfort, even in a dense city, through lush winter gardens, balconies, and retractable facades, has defined Lacaton & Vassal’s projects since they began their practice in 1987. It’s especially striking at La Tour Bois le Pêtre, a 17-story, 96-unit Paris housing project built in the 1960s that the pair transformed in 2011, garnering them international attention. Rather than raze the building, as the government wanted to do with much of its maligned mid-century social housing, the architects put their radical mantra to work: “Never demolish, never replace.” They extended the footprint of the building by removing the facade and adding generous bioclimatic balconies, and each unit now has a flexible indoor-outdoor living space with views of the city.

The architects took a similar approach to the transformation of another city housing block in Bordeaux, in 2017. With architects Frédéric Druot and Christophe Hutin, Vassal and Lacaton expanded all 530 units of Grand Parc without displacing residents and for half of the cost of building new, garnering the team the European Union Prize for Contemporary Architecture in 2019.

Lacaton and Vassal met in the late 1970s at École Nationale Supêrieure d’Architecture et de Paysage de Bordeaux and were drawn to each other’s sensibilities. “We worked well together and we decided to continue,” said Lacaton. She went on to pursue a Masters in Urban Planning from Bordeaux Montaigne University while Vassal went to Niger. The Moroccan-born Vassal said his childhood in Casablanca must have influenced his chosen profession, with its modernist buildings oriented towards the ocean and its legacy of craftsmanship. His father, a meteorologist, attuned him to the climate, both indoors and out.

Creating a porousness that allows a building’s inhabitants to easily access the outdoors has been a constant in Vassal and Lacaton’s work, beginning with their early private houses. The small budget Latapie House of 1993, in Floriac, France, employs natural ventilation and solar shading. Using wood, polycarbonate sheeting, and opaque fiber cement boards, the architects created operable layers of openness and refuge.

This doubling of usable space can be seen quite literally in the pair’s FRAC Nord-Pas de Calais, a contemporary art museum in Dunkerque, France. There, the architects preserved a pre-World War II shipbuilding facility on the waterfront and built a twin structure adjacent to it with transparent, pre-fabricated materials. Visitors can see through the new into the old structure, which now provides space for public programming.

Grouped together, Lacaton & Vassal’s projects might seem to have a similar palette and modest materiality, but Lacaton insists that their designs begin with the “conditions of living, of feeling, of living together,” and that the choice of materials is a direct response to the desire to create a building envelope that is light and responsive to the seasons. “Transparency is important, but transparency that can be nuanced and filtered with glass or polycarbonate,” said Lacaton. “The notion of escape is important.” Lacaton agreed, adding that their goal is to free architecture from its defensive position against the environment, but rather play with it “like clothing.”

When they create new buildings, as they did for an architecture school in Nantes, France, Vassal and Lacaton use this same idea of a skeletal system with “platforms and envelopes” to create adaptable, flexible spaces. Located on the Loire River, the École Nationale Supérieure d’Architecture de Nantes is a three-story building featuring a concrete and steel frame encased in retractable polycarbonate walls and sliding doors. A wide ramp that runs from the ground to the roof deck is meant for spontaneous gatherings.

Vassal & Lacaton’s office of eight is currently working on the transformation of a former hospital into a 138-unit, mid-rise apartment building in Paris and an 80-unit, mid-rise building in Anderlecht, Belgium, among others. The architects said they were celebrating their win with wine from Bordeaux (of course) and looking forward to seeing friends and colleagues when COVID-19 eased. Vassal said he wanted to use their platform to amplify the voices of young architects. “We have to believe in their dreams and their ability to improve the quality of life for everyone. Most of the time we don’t ask them, and most of the time we should ask them much more.”

Watch the video below courtesy of the Pritzker Architecture Prize