Casa A4 by Barclay & Crousse

“There are no weather forecasts in Lima,” Sandra Barclay and Jean Pierre Crousse have joked when presenting their work. It is an especially significant point given the difference between designing in their home city, to which they returned in 2006, and Europe, where they had been based since founding their eponymous firm in Paris in 1994. The climate of the Peruvian capital—with year-round mild temperatures and moody conditions of light and shade produced by the often lingering cloud cover—has unquestionably shaped Barclay & Crousse’s architecture. It has influenced not just the large freestanding civic and cultural projects they have built within the city and along the country’s rocky coast, but even this two-story house on a tight urban plot in Lima’s San Isidro neighborhood near the waterfront. 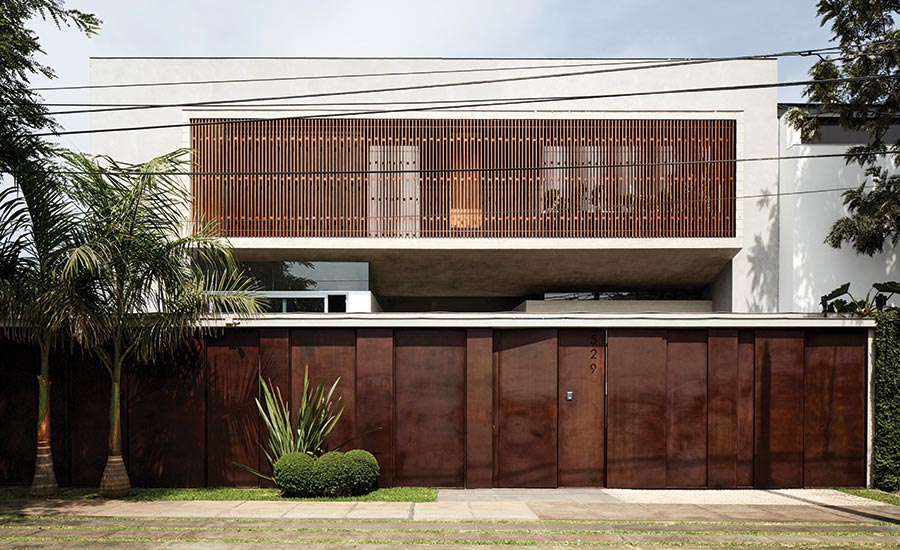 The house’s straightforward street presence (above) belies the unusual arrangement of volumes and voids behind it (top). Photo © Cristóbal Palma, click to enlarge.

Using the limits of the site, the architects established a startling but ordered juxtaposition of volumes and voids, creating a ground-floor living space of extraordinary openness contrasted by intimate upper-level sleeping quarters, all bordered by 13-foot-high perimeter walls required by code. The scheme “floats” three parallel concrete bars over the rectangular parcel, leaving the area below exposed. These mainly opaque bars of similar size, containing the four bedrooms, are connected by a narrow, transparent skybridge. They rest atop the thickened lateral walls at grade, offering a means of enclosure, when desired, for the sitting, cooking, and dining spaces directly beneath each of them, but separated by lushly planted courtyards. 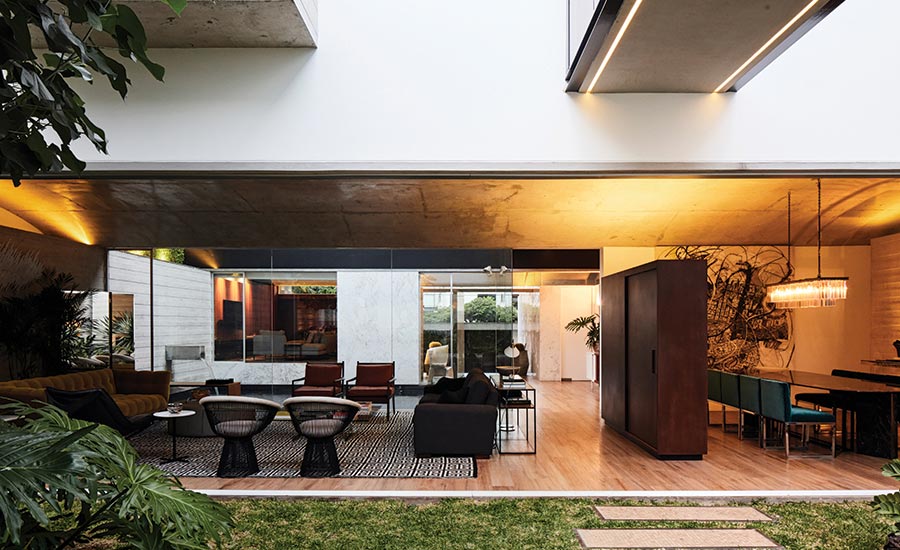 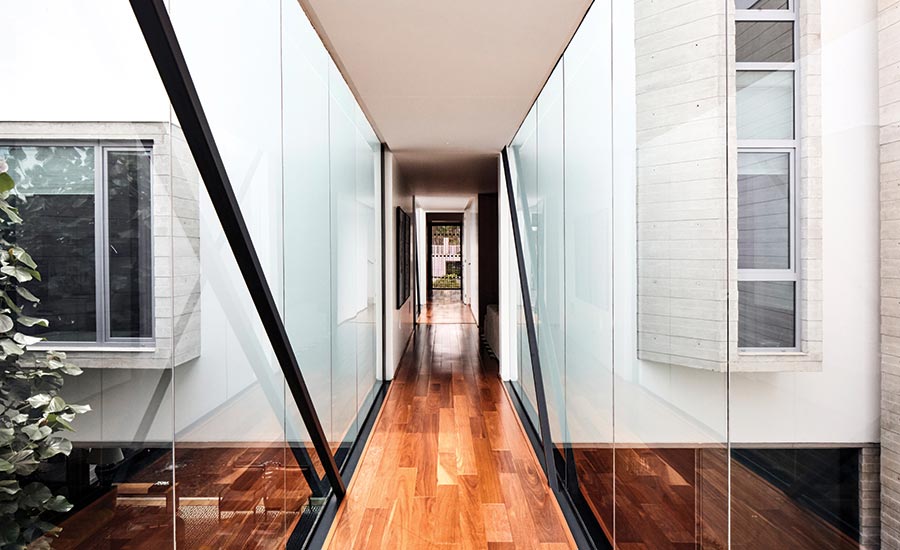 The living and dining areas share the space underneath the middle bar (1). A glass skybridge connects all three bars (2). Photos © Cristóbal Palma

This unusual amalgamation, impossible in most other contexts, is concealed behind the dwelling’s rather ordinary street face. Set back several feet behind a fence of solid weathering-steel panels, the front concrete volumes are punctuated at the top by a wood mashrabiya screen masking the main bedroom on the second floor. The barrier acts in much the same way as the closed wooden balconies, or miradores, of Lima’s historic center, a remnant of the Islamic traditions, carried over to southern Spain, that have influenced Peruvian architecture since colonial times. 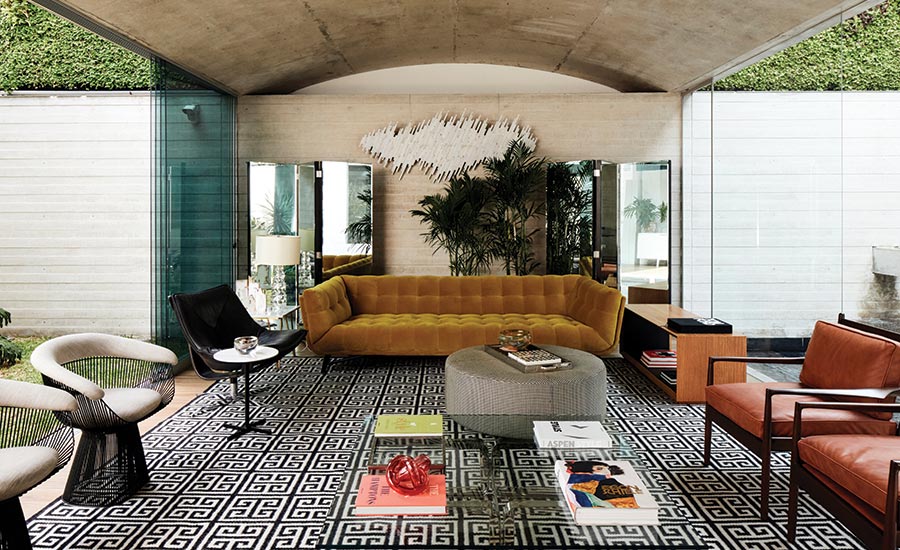 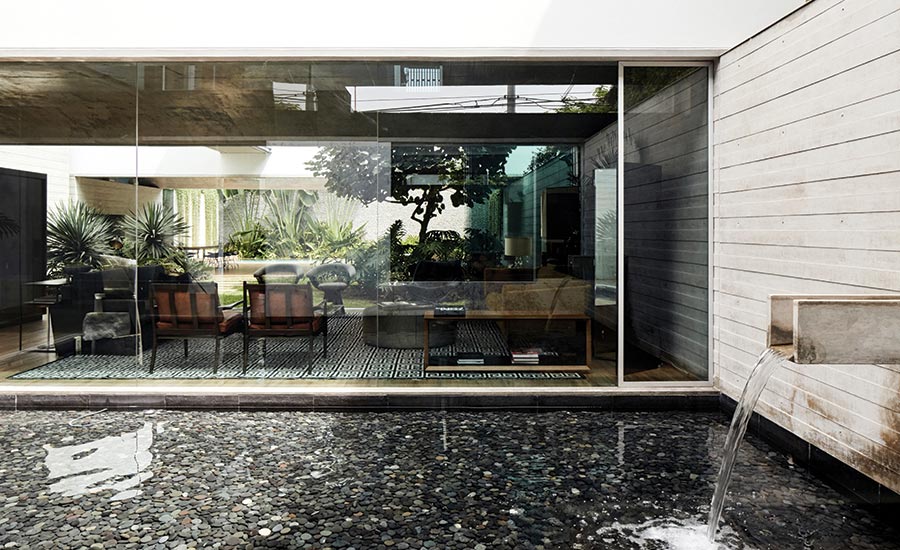 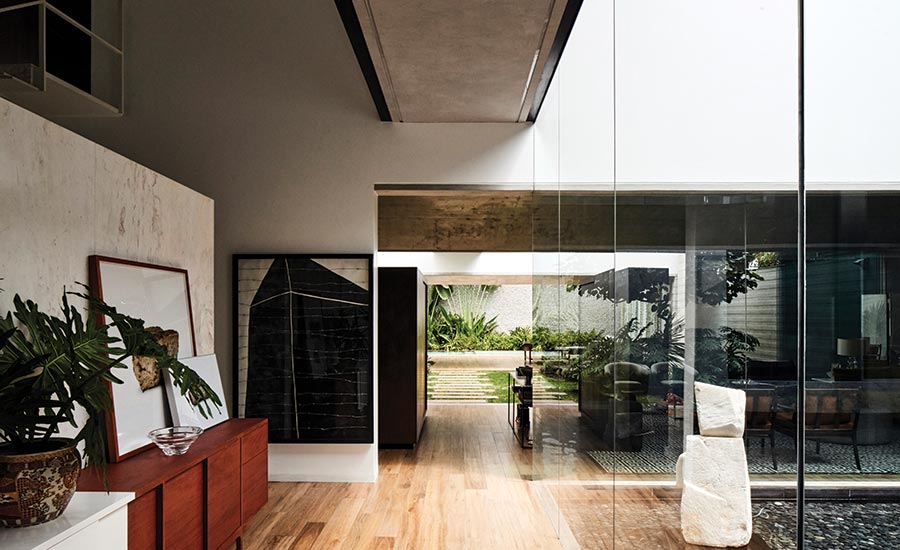 The glass walls that enclose living spaces slide open (3), allowing interior furniture and finishes to be continuous with the water elements (4) and planted surfaces (5) of the courtyards. Photos © Cristóbal Palma

Working in Peru has brought different challenges, however. Tight security measures restrict entry to the home’s second level, a reminder of the kidnappings and political unrest that plagued the country at the end of the 20th century and instigated to some extent the architect couple’s exile in Europe. Their competition-winning 2013 project, A Place of Remembrance, a 50,000-square-foot cultural center dedicated to the victims of that era, is embedded in the cliffs and ravines just several hundred yards from this house.

The elongated bar-like volumes of the second floor, despite their limited accessibility, play a critical role in the architectonic experience of these confines. With their large protruding windows, they are even more like the miradores, known as “streets in the sky,” than the front screen, allowing protected views to activity below them. The undersides of the bars form the gently curving tops of the living spaces. The architects had several reasons for vaulting those ceilings. The abutments at each end of the arches conceal the additional structure—reinforced-concrete columns within the lateral walls—that supports the suspended volumes in this seismic zone. The bowed surface, on the other hand, better distributes natural light on those frequent overcast days as well as the electric illumination, hidden within the air space between the walls on either side. Those double walls, atop which the 44-foot-long bars sit, also accommodate storage. Along the south edge, the architects pulled the walls even farther apart to allow for a discreet walkway between the kitchen and the outdoor grilling area by the pool. 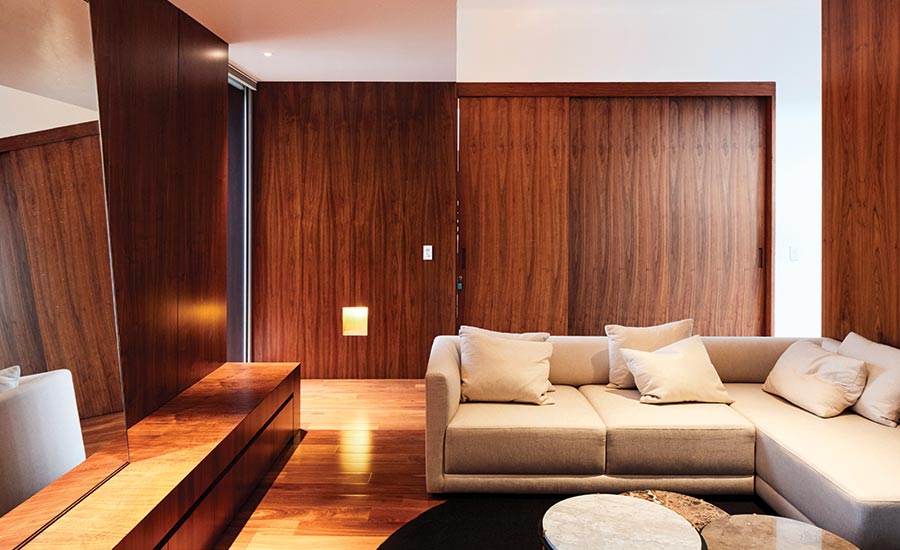 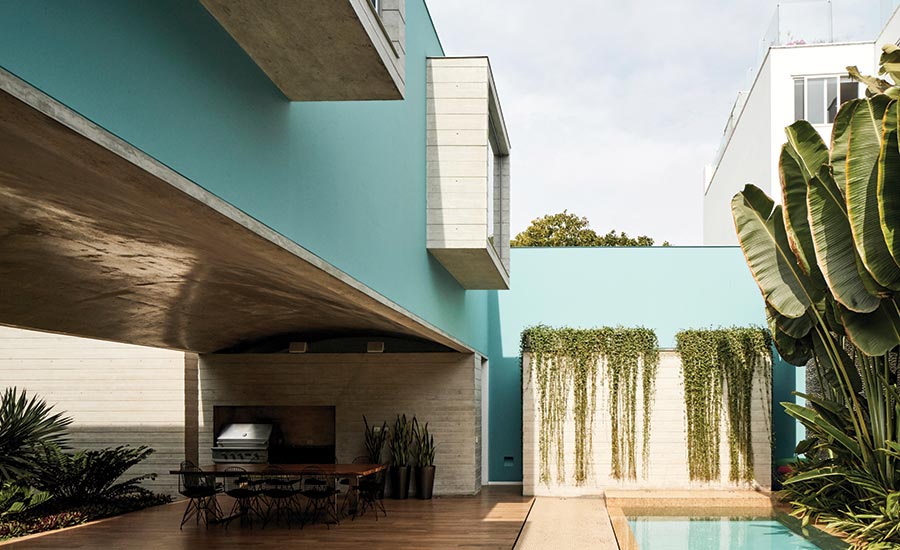 A seating area on the upper level (6) offers a more intimate room than other parts of the house, which culminates with a covered space for outdoor grilling and a pool (7). Photos © Cristóbal Palma

But beyond the multifunctional aspect of certain building elements, a strategy Barclay & Crousse often employs, the house offers the strong sectional quality—with changing conditions of space from top to bottom—for which the architects have come to be known in their larger projects. At A Place of Remembrance, for instance, visitors enter from the cliff’s summit and descend to the exhibitions; at Edificio E at the University of Piura in Peru, winner of the 2018 Mies Crown Hall Americas Prize, the elaborate roofscape is an integral part of the design, a true “fifth facade.” 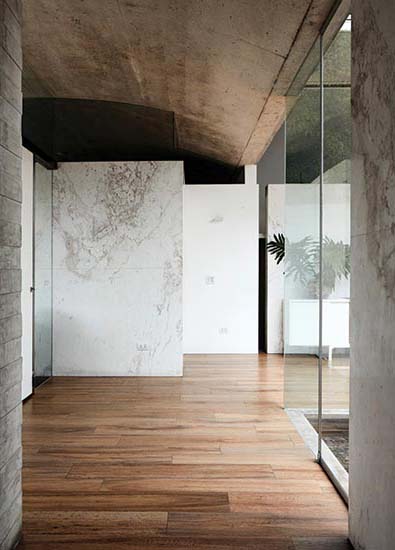 But this is a building without any real facades and, here, Barclay & Crousse has created not a house but a landscape, one that offers alternating experiences of space, enhanced by a diversity of materials, both natural and manmade. Yet, as rich as that is, there is an unfinished aspect to the project—the feeling persists that one can fill in a void, or add to a bar. Indeed, the middle bar grew upward during the protracted design process, as the family desired a studio above the bedroom there. It is a testament to the architects’ approach to form-making that the design was not impeded by the confines of the site, but instead became more flexible, more nuanced, and, in the end, most exceptionally livable. 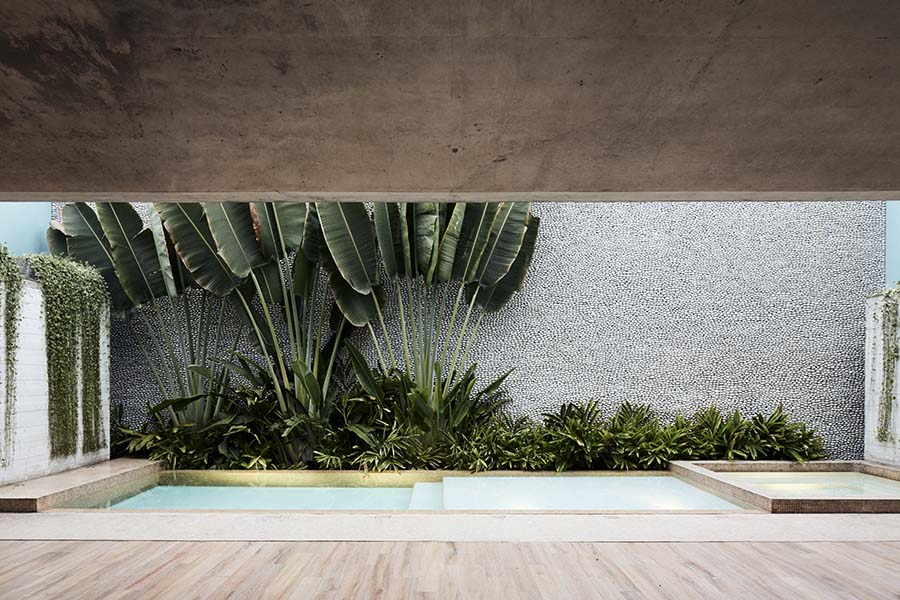 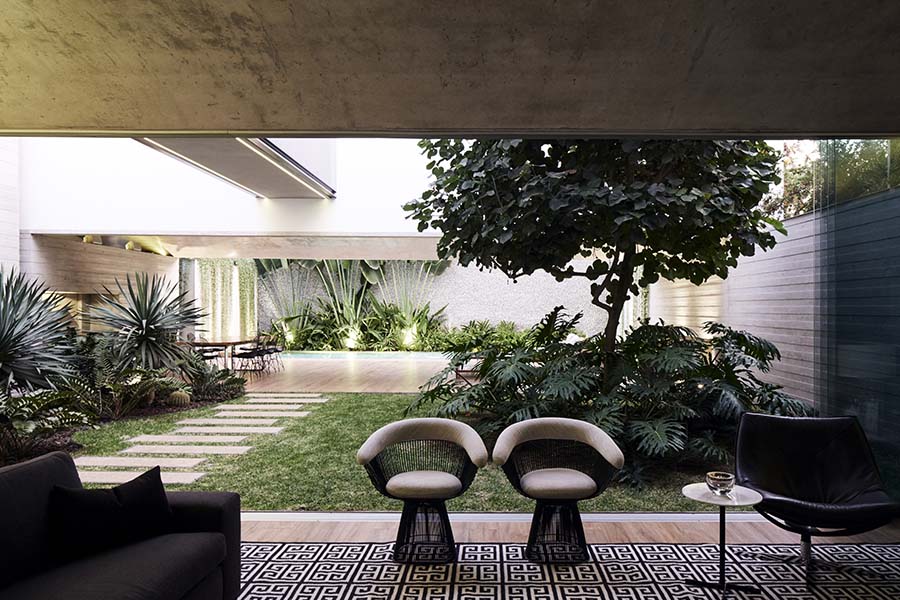 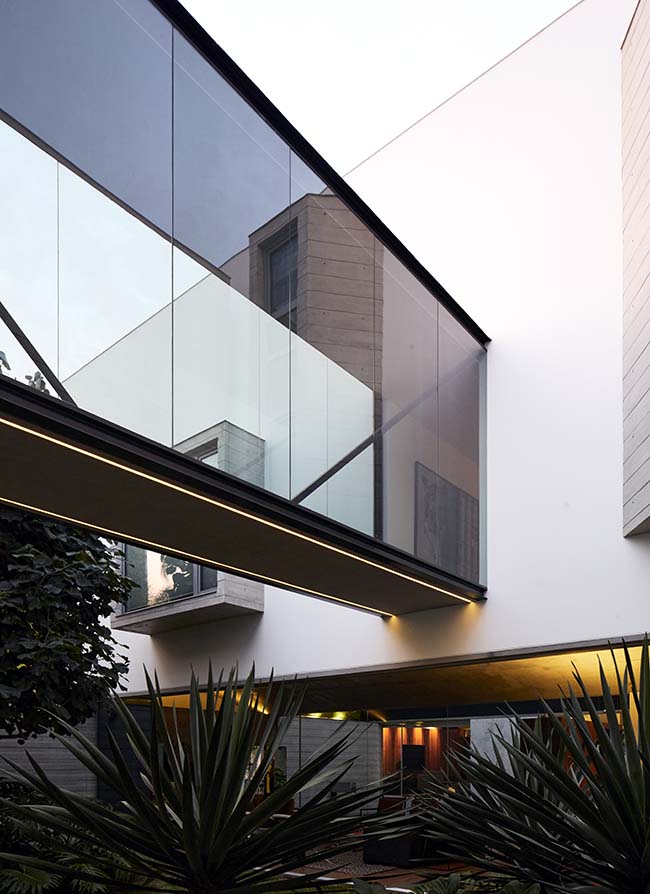 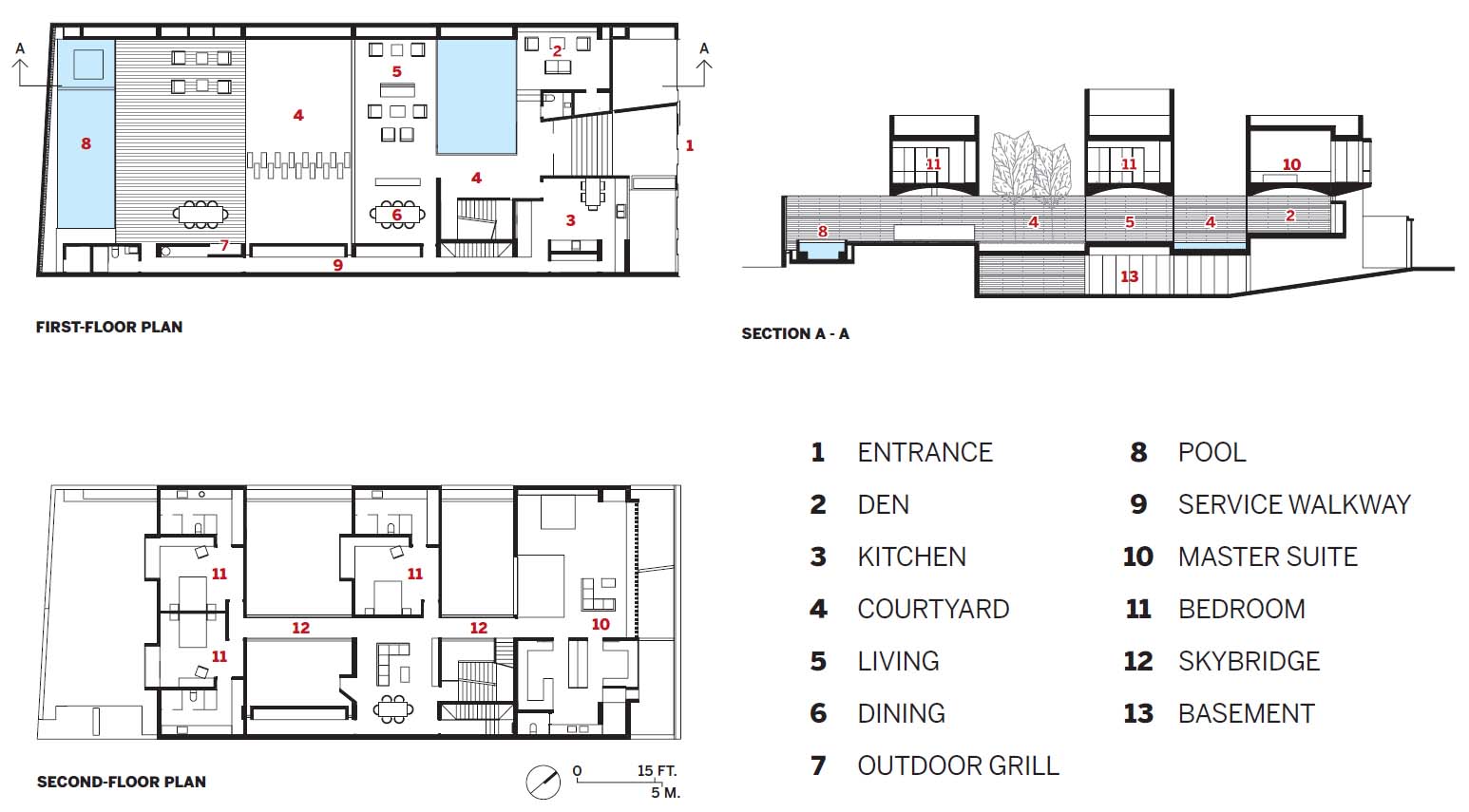 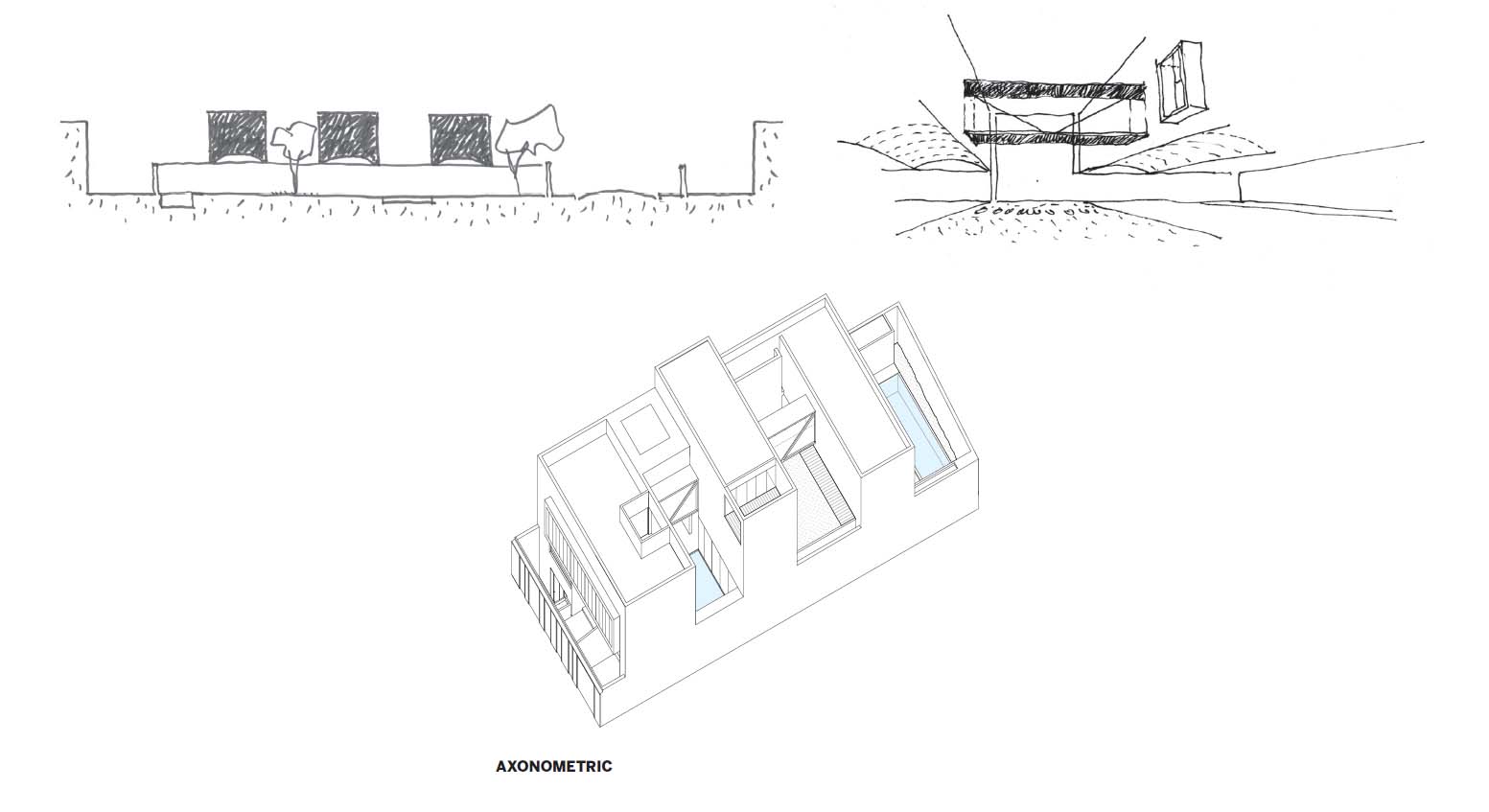