This website requires certain cookies to work and uses other cookies to help you have the best experience. By visiting this website, certain cookies have already been set, which you may delete and block. By closing this message or continuing to use our site, you agree to the use of cookies. Visit our updated privacy and cookie policy to learn more.
Home » U.S. Pavilion at the 2021 Venice Biennale Spotlights the Humble American Wood Frame
Architecture News

Can the Mundane Be Captivating?

There are many things in our surroundings we take for granted because they’re everywhere—they’re simple and they work. But sometimes their very ubiquity makes them significant: think of wood framing, a system so basic and straightforward that it is used to build more than 90 percent of all housing in the United States. Paul Andersen and Paul Preissner, curators of this year’s U.S. Pavilion at the Venice Architecture Biennale, shine a spotlight on this humble method of construction to explore what it says about America’s history and our attitudes toward labor and the built environment.

Sometimes dismissed as “stick construction” and usually ignored by the architectural academy, wood framing reveals much about American design and building. “It’s ad hoc and allows for on-site changes and improvements,” says Preissner. “It’s not uptight.” The same might be said of this year’s U.S. Pavilion. Instead of getting lost in the weeds of theory or postulating on the latest “ism,” Andersen and Preissner cheekily ask if the mundane can be illuminating or even, perhaps, captivating.

The story begins on the American frontier, where, in the 19th century, settlers used what they found—trees, lots of them—and the skills they had, often rudimentary, to erect their homes, barns, stores, and places of worship. A few workers with hammers and saws could use the dimensional lumber from local mills and the cheap nails from new factories to put up a building in very little time. Through trial and error, they devised a method of construction that was flexible and forgiving. In the Old World, wood buildings tended to be heavy timber structures that required more expertise, better tools, and more thought. In the New World, pioneers erected lightweight frames with slender two-by-fours and 2-by-6s in a system that relied on repetition and allowed a degree of sloppiness in conception and craft.

“Improvisation and a certain resistance to authority are American values you can see in this method of construction,” says Preissner. “It’s an open system that allows for unlimited creativity in form and design,” adds Andersen. 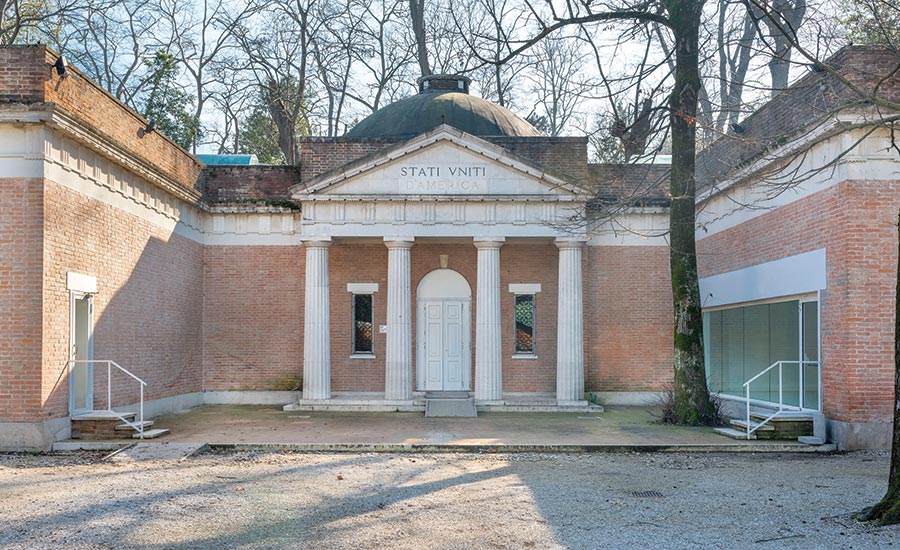 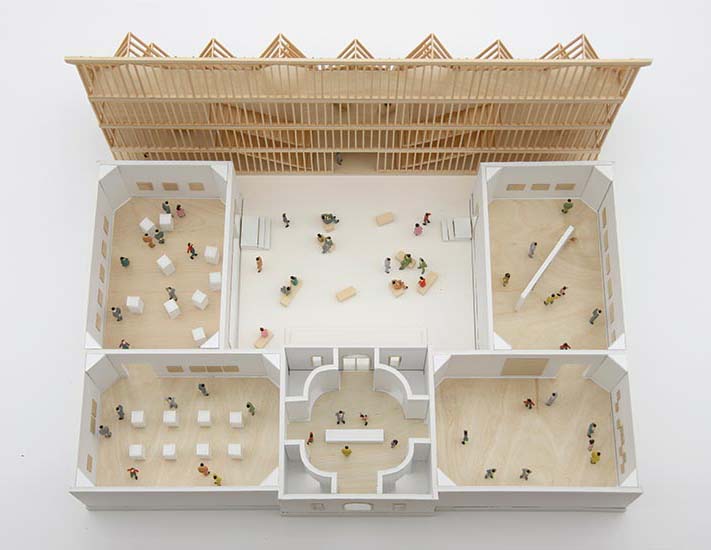 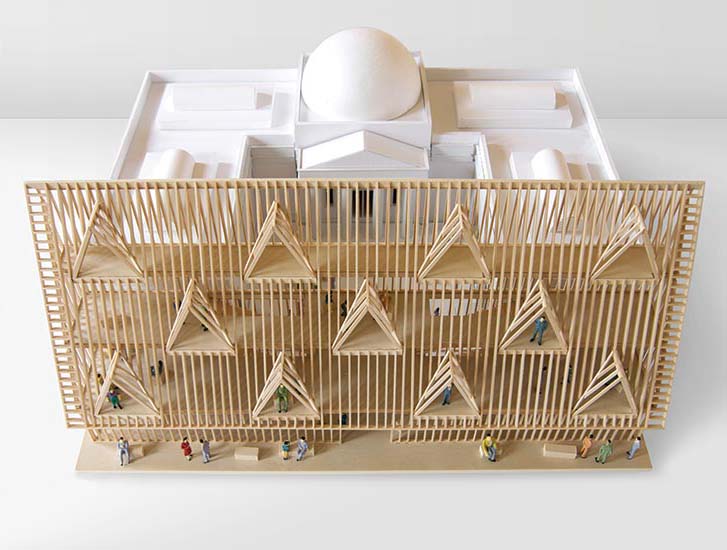 Andersen and Preissner, who both teach architecture at the University of Illinois, Chicago (UIC), run their own practices—Preissner in Chicago and Andersen in Denver—but have collaborated on small-scale projects in the past. Anderson has a long interest in popular culture and history, while Preissner is fascinated by notions of the banal. His first monograph, Kind of Boring, was published this year by ACTAR.

The two curators take sly pleasure in revealing what’s normally tucked behind drywall and in giving a supporting actor a star turn. In Venice, they will introduce their subject in dramatic fashion with a four-story wood-frame structure that acts as a walk-through stage set, rising in front of the U.S. Pavilion. As designed by Andersen and Preissner, this 40-foot-tall, 88-foot-wide construction—all frame and no cladding—engages Delano and Aldrich’s 1930 Neoclassical pavilion in a lively conversation about what architecture is and where it comes from. Its enormous pitched roof, punctuated by rows of triangular dormers, is a three-dimensional sketch: an unfinished mansion of many rooms, open in a characteristically American way. While it closes off the old building’s front courtyard, it will offer visitors the chance to climb three levels and look out toward the other national pavilions in the beautiful Venetian Giardini. (A light steel mesh attached to various structural elements will prevent people from falling as they touch the raw lumber, inhale its fresh scent, and engage directly with American framing.)

While those 19th-century settlers had access to tall, old-growth trees for the balloon frames they developed, their descendants had to use shorter pieces of lumber from less mature trees. So the balloon frame gave way to the platform frame, with posts running from floor to floor rather than from ground to roof. This reduced the chances of fire’s shooting up tall posts and igniting one floor after another. It also led to the standardization of lumber sizes, making the system more affordable and available—and uniquely democratic. Today, farmed trees are a renewable resource that capture carbon as they grow and require much less carbon to process than concrete or steel. Efficient milling equipment leaves little waste, and even bark can be used for siding and paneling.

To explore the history of American framing in Venice, a dozen wood models built by UIC students, at a scale of ½ inch to 1 foot, will be on display, showing historic and cultural typologies ranging from a 19th-century balloon-frame warehouse and a round barn to a Sears mail-order house, a single-wide mobile home, and an elongated geodesic dome from a countercultural 1960s commune. As they move from one gallery to the next, visitors will see changes in the methodology, form, and detail of these structures. The curators commissioned Daniel Shea to create a series of photographs documenting fir and pine forests, while another series of photographs on view, by Chris Strong, will look at the raw materials and the people who work in lumber mills and yards, and on construction sites. In the pavilion’s central rotunda, there will be a model of Spike’s doghouse from the Tom & Jerry cartoons—an amused nod to the intersection of popular culture and American construction. In the courtyard, visitors will be able to relax on wooden furniture created by UIC students in collaboration with Ania Jaworska and Thomas Kelley, who teach at UIC, and Carrie Norman, who is Kelley’s design partner.

Both Andersen and Preissner had participated in the U.S. Pavilion at the 2000 Biennale as students, Andersen working under Greg Lynn’s direction at UCLA and Preissner under Hani Rashid at Columbia. But neither knew of the other’s early involvement until they visited Venice together in 2019. That first taste of the global event had whetted their appetite for competing to be curators of this year’s pavilion, and convinced them of the importance of engaging their own students in its creation. (On their 2019 visit to Venice during the art biennale, they saw artist Martin Puryear’s installation, which featured a wood screen in front of the U.S. Pavilion, putting the Neoclassical building in a dialogue about old and new. Andersen and Preissner say they had already developed their exhibition content and had designed the giant wood frame that would screen the front of the building two years later, so Puryear’s work had no influence on theirs. “It was just a funny coincidence,” says Preissner.)

Though originally scheduled for last spring, the architecture Biennale was derailed by the pandemic—at first pushed back to last September and now slated to open on May 22 and close on November 21. At press time, Italy was in lockdown, due to a Covid surge, but Biennale officials seem determined to press forward with the May opening. Along with exhibitions in the Arsenale—the enormous complex where thousands of workers once built Venice’s fleets—and the Central Pavilion, 63 country pavilions will open, the same number as last time, according to the Biennale. The director of this year’s Biennale, Hashim Sarkis, dean of the School of Architecture and Planning at MIT, has organized the event around the theme “How Will We Live Together?”

Andersen and Preissner developed their ideas for the U.S. Pavilion before Covid struck and have made only minor changes—to the installation’s circulation (one direction now) and seating (limited)—in response to the virus. Says Andersen, “Luckily, our topic is timeless, so it works as well today as it would have before the pandemic.”

The U.S. Pavilion is presented in conjunction with the Peggy Guggenheim Collection in Venice, which owns and manages the building, and the U.S. Department of State’s Bureau of Educational and Cultural Affairs. Architectural Record is the media sponsor of the 2021 installation.