In the Rwandan capital city of Kigali, the new African Leadership University (ALU) campus, designed by Boston-based MASS Design Group, looks boldly to the future. The handsome 70,000-square-foot pale tan brick building, one of the firm’s largest education projects to date, cascades down a steep hillside—a roughly 130-foot drop in elevation—connecting outdoor plazas and passageways in a dynamic grid structure. It is a physical manifestation, says MASS founding principal Michael Murphy, of a pioneering pedagogy with one driving goal: to transform Africa by cultivating its next generation of leaders. 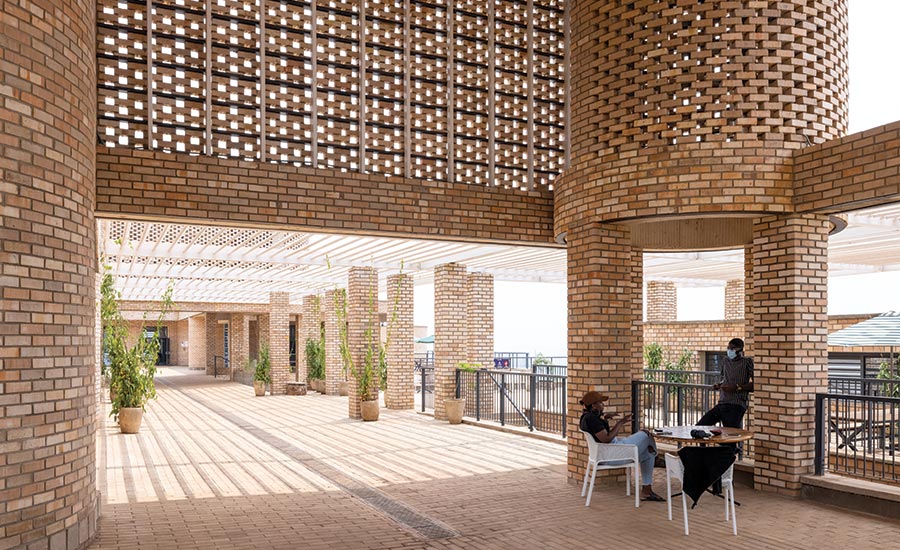 The hillside university offers a variety of spaces for study and meeting, inside and out (1 & 2). Photos © Iwan Baan, click to enlarge. 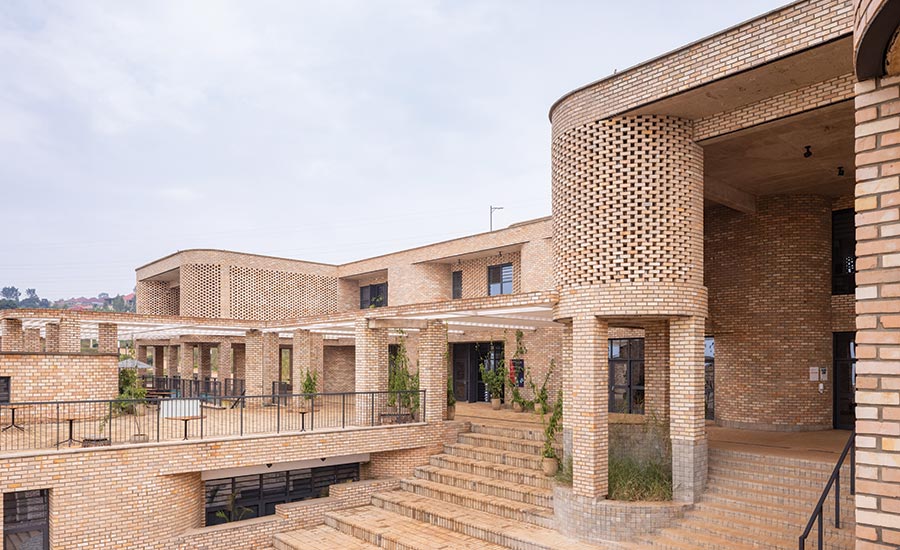 The university expands on the mission of the African Leadership Academy (ALA), a competitive residential high school located on the outskirts of Johannesburg, cofounded in 2004 by the Ghanaian entrepreneur Fred Swaniker. In 2015, Swaniker launched ALU’s first campus, in Mauritius, to meet the growing demand, at the college level, for the type of intensive, hands-on training provided by ALA. Together these institutions bring together young people from across Africa, grooming them to develop the innovative professional and ethical governance skills needed to tackle the most pressing challenges facing the continent—which, with the fastest-growing population in the world, is projected to have a greater workforce than China by 2030. Swaniker engaged MASS in 2017 to submit a proposal for the second ALU campus, to be in Kigali Innovation City, a new special zone in the Gasabo District comprising schools and biotech and technology companies.

MASS—which has an office in Kigali and has planned, designed, and built nearly two dozen locally sourced projects in Rwanda, including research centers, medical facilities, schools, and housing—worked closely with the ALU team to create a built environment that would uphold Swaniker’s progressive vision. Unlike the paradigm of higher education in the United States, where sprawling, infrastructure-heavy campuses with large lecture halls are the norm, ALU’s model is organized around more intimate classrooms and work spaces that support four phases of schooling: discovery, in which students identify what they need to learn; individual, self-paced instruction; peer learning; and facilitated group learning. According to Boston-based project architect Patricia Gruits, the design team participated in workshops, focus groups, and various exercises with faculty, staff, and students to “try to understand the nuance of what happens in each of these phases, and to figure out how the architecture could respond.”

The design team observed that most learning happens outside the classroom, and that small group settings are critical to maintaining the culture of innovation and entrepreneurial spirit that drives ALU’s curriculum. These scenarios were translated into a spatial arrangement of modules and pods, which form the six-story building’s structural grid. The modules, each defined by four open columns, constitute “work hives,” with various seating arrangements; the pods—small rooms within the hollow round columns—accommodate both individual and peer learning. 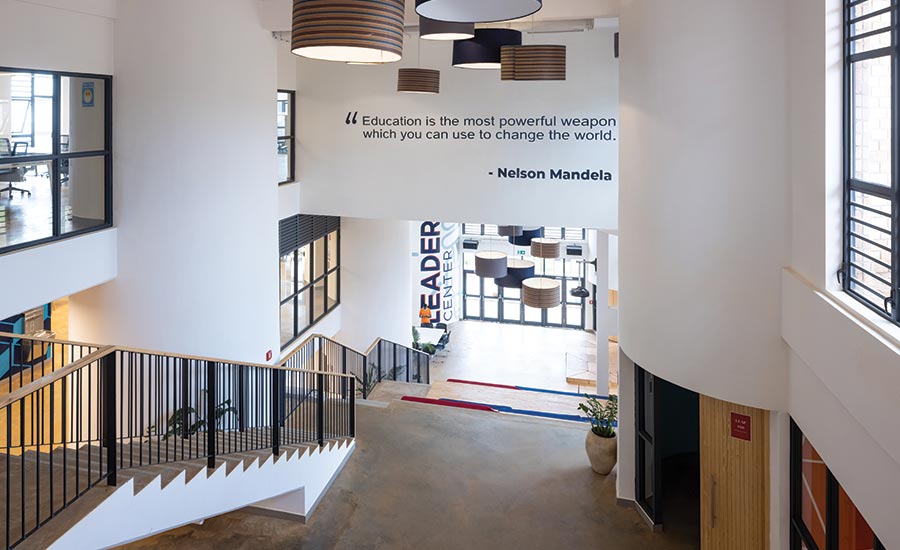 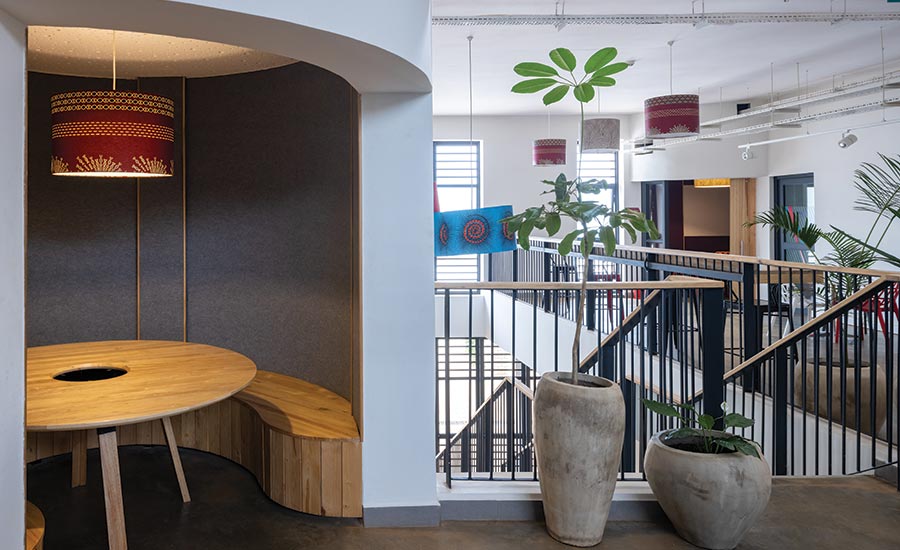 These columns are a motif throughout the building, holding mechanical and electrical risers and elevators inside, as well as seating areas and planting spaces outside for a profusion of trees and greenery. The handsome brick walls include open-brickwork screens as part of the facade, to promote natural ventilation throughout the building.

Considering the site’s dramatic change in elevation, the modules enabled the architects to conceive of the building—which has a structure of locally made stabilized earth blocks and reinforced concrete—as a system of smaller components that stack and interlock, creating a complex network of tiers and terraces, with numerous outdoor gathering and work spaces. That design also allows for flexibility. “ALU is expanding so quickly,” says Gruits, “it needed a building that could grow to meet demand and give it the ability to adapt and evolve.”

According to Murphy, the building’s program is a prototype not just for ALU—which has ambitious plans to build more than two dozen medium-size universities across Africa within the next 15 years—but also for countries around the world, including the United States. “The education paradigm in the U.S. cannot be replicated in the next generation—there needs to be a new standard,” says the architect. Ideally, this framework would embrace remote learning—not in the vein of the current ad hoc Zoom model, but “designed around a much more regimented online structure.” In this way, the pandemic has revealed ALU’s great foresight, Murphy says. “I would call it a post-Covid pedagogy that’s already built.”