For most of us, rampant disease outbreak is uncharted territory that we are just learning to navigate in the face of COVID-19. But the Boston- and Kigali, Rwanda–based nonprofit MASS Design Group has been working on the front lines of infection transmission since the firm was established by Michael Murphy, Alan Ricks, and fellow students from the Harvard University Graduate School of Design, in 2008.

Founded on the belief that the built environment is never neutral and has the power to harm or keep us safe, MASS has worked extensively in developing nations, constructing and retrofitting buildings to promote infection control as well as creating design standards and guidelines for government infrastructure. That expertise enabled MASS to form a COVID-19 Design Response team here in the U.S., to share strategies (mostly open-source guidelines) aimed at mitigating the risk of infection in health-care spaces and beyond.

But in the meantime, the firm has continued to design and build in the developing world, during what has been a particularly prolific period. “We have 10 times as much under construction today as we have done in last 10 years combined,” says Ricks. Nearing completion are several health-care projects in Africa. Though each is unique in responding to its context, each showcases the firm’s approach and offers widely applicable best practices.

MASS’s philosophy of health-care design goes back to its first hospital, in Butaro, Rwanda, in 2011, working with Paul Farmer’s Partners in Health. It used simple passive-ventilation systems to reduce airborne infection. This focus on natural airflow—as well as leveraging outdoor areas and using local, sustainable materials for creating spaces with dignity—have guided the design process and become hallmarks of MASS’s work. 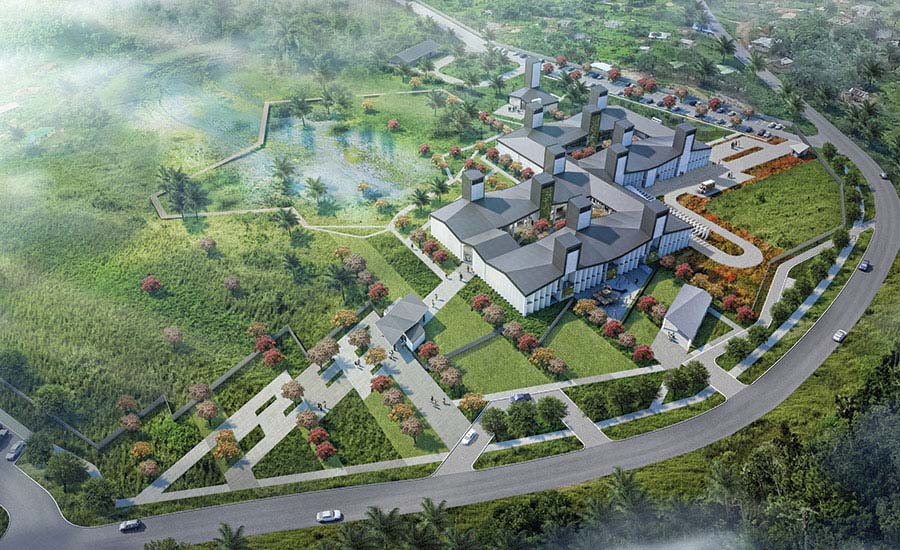 The figure-eight form of the New Redemption Hospital (above) embraces expansive courtyards (top). Click to enlarge.

Such tenets are elevated in the design of New Redemption Hospital in Caldwell, Liberia, whose first phase is scheduled for completion in June 2021. Originally brought in to develop the national infrastructure guidelines and standards for health-care facilities, MASS designed the two-story, 155-bed maternity and pediatric hospital near the site of the original one in a rapidly urbanizing district of greater Monrovia. Composed of two square volumes, in a figure-eight form, the building has large courtyards at its two centers and an undulating, unifying roofline. To provide shading and mitigate solar gain, the team is wrapping the exterior in vertical masonry fins and employing local reeds within a steel frame to shade the corridors on the courtyard side. Working in a country that had recently been ravaged by an Ebola epidemic, the team was committed to rebuilding public trust in the system among a population that had come to see hospitals as a place to die. A welcoming tone prevails, beginning with a gracious public forecourt and procession into the building, and continuing through light-filled interiors, abundant connections to the outdoors, and the extensive use of renewable rubberwood inside, which brings a domestic warmth to surfaces and furniture.

The building is oriented to enable airflow, with non-conditioned spaces facing southwest to capture breezes and those requiring mechanical ventilation, like operating theaters, located within the building’s wind shadow or toward the southeast. The large courtyards, planted to offer privacy, serve as waiting areas, limiting time spent indoors. Giving formal expression to the significance of airflow are 12 solar chimneys (developed with Transsolar) that tower over the building. Because of the high heat and extreme humidity here, the chimneys incorporate fans that, along with heat flow, draw contaminated air past ultraviolet gerimicidal irradiation (UVGI) lights and out of the building, cycling 12 times an hour and producing a cooling effect. Working with civil engineers, the team is planning to keep the surrounding wetland intact but increasing the depth of channels to control the mosquito population. “We try to use the landscape to support internal services,” points out senior principal and managing director Sierra Bainbridge. An accessible pathway planted with native species circumnavigates the water, creating a healing environment beyond the walls of the hospital.

While MASS was working on national standards for Liberia, the government of Rwanda similarly asked for a set of principles that could be used in building new district hospitals. MASS responded with a tool kit that could be adapted to distinct sites, devising twin designs for either rural or urban contexts. Both schemes call for bar buildings that can step down on a sloped site, and both employ Butaro’s core strategies: exterior hallways, cross ventilation and UVGI lights, as well as single-loaded wards that are connected to balconies, with generous fenestration for views and airflow. 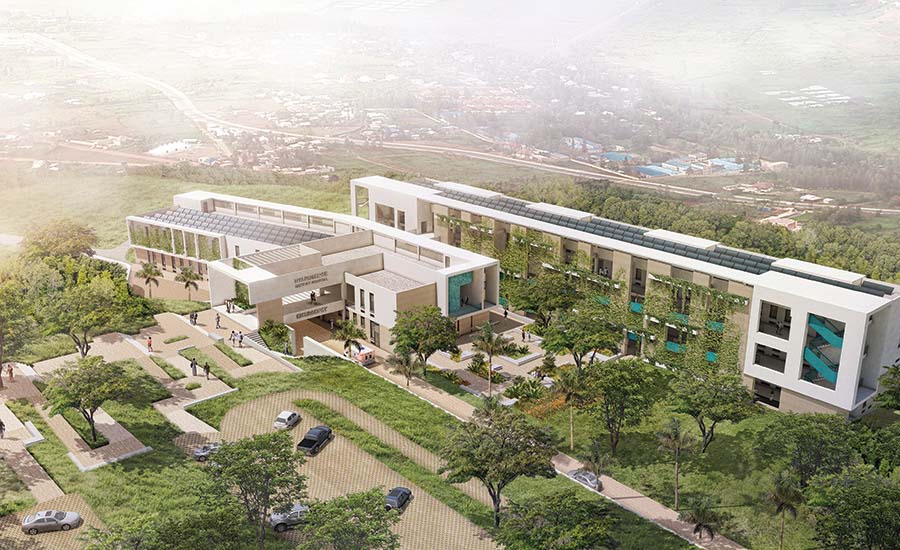 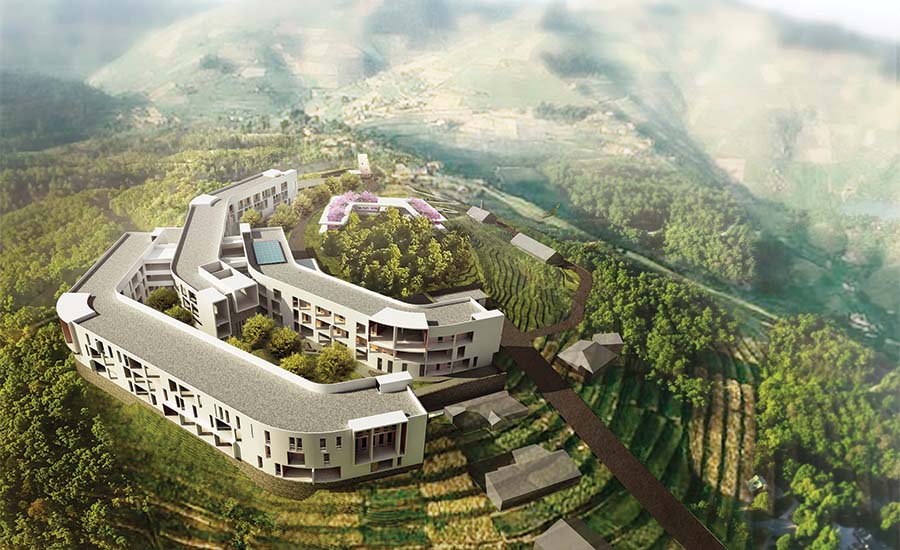 MASS developed a tool kit of principles for designing district hospitals in Rwanda. The first prototypes are for an urban facility, Nyarugenge (1), and a rural one, Munini (2).

Two MASS-designed hospitals are the first prototypes. For the 80,000-square-foot 300-bed Nyarugenge District Hospital in Kigali, Rwanda’s capital (slated for completion this month), the plan is for two bar volumes that are more or less parallel, while at the rural 155,000-square-foot 300-bed Munini District hospital (due for completion in the fall), three bar volumes bend along the site’s contours in deference to a memorial to the 1994 genocide at the top of the hill. Both strategies use exterior space for airborne-disease control through spacious, shaded courtyards between the volumes that can be patient waiting areas, as well as early labor walking gardens for expectant mothers and play areas for children. While Munini has the benefits of a large, landscaped campus, Nyarugenge, due to its urban context and compressed site, will employ vertical gardens on facades, offering both shading and psychological benefits.

Though MASS aims to use locally sourced materials, here the team opted for reinforced-concrete structural systems. This facilitates replication across Rwanda, says senior principal and managing director Christian Benimana, since it is widely available, appropriate for seismic zones, and familiar for most workforces. Yet local materials are also used: fired clay brick and compressed stabilized earth (CSE) blocks at Nyarugenge; for Munini, fired clay brick and local stone, lending texture to the largely stucco exteriors. 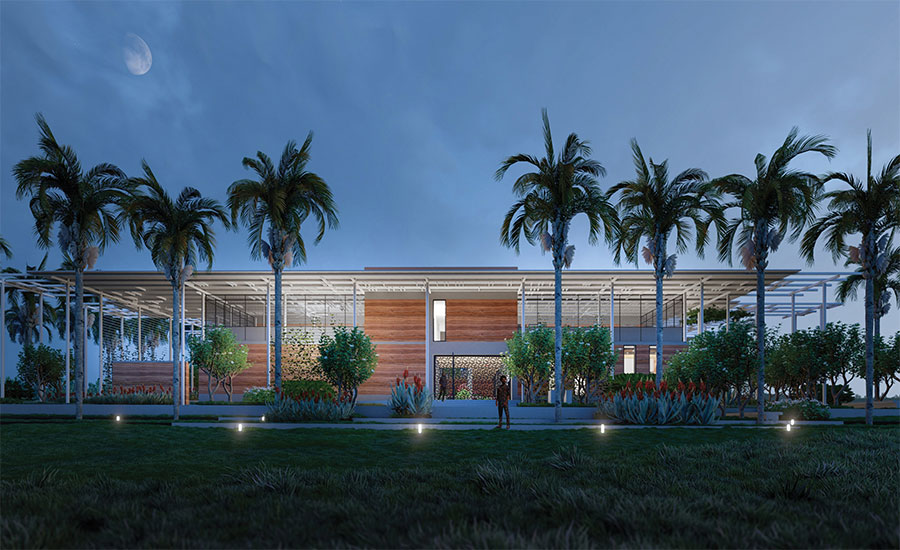 The first research institute of its kind in Africa, ACEGID will hold high-tech biosafety level-3 labs behind its walls of rammed earth.

The African Centre of Excellence for Genomics of Infectious Diseases (ACEGID), in Nigeria, is celebrated for its pioneering work on Ebola. ACEGID, led by Dr. Christian Happi, is collaborating with Dr. Pardis Sabeti of Harvard and the Broad Institute, to pursue epidemic remediation across the continent and form a global pandemic-surveillance network to use sequencing to prevent the next pandemic. In this effort, the team is partnering with MASS to build a 14,000-square-foot genomics laboratory in the southwestern town of Ede, the first research institute of its kind in Africa, scheduled for completion in the fall. ACEGID wanted the institute’s architecture “to be as bold as their scientific research,” says Ricks. A low-slung rectilinear massing of solids and voids, its labs and offices alternate with exterior decks for respite and revitalization. Broad steel-and-wood canopies wrapping the structure mitigate solar gain while providing inviting areas for the broader population of Redeemer’s University to gather (the labs inside are only open to authorized staff and students). A solar array on the roof helps with demanding energy loads. Aspiring to demonstrate the “high-tech potential of locally available materials,” the center is probably the only biosafety level-3 lab (for handling toxic pathogens) in the world to employ walls of rammed earth, providing high thermal mass with low embodied carbon. Getting approval for the use of low-cost and sustainable rammed earth for a health-care facility (and for the CSE blocks at Nyarugenge) after 10 years of effort is a major triumph for MASS, and an approach the firm hopes can be incorporated into future projects. 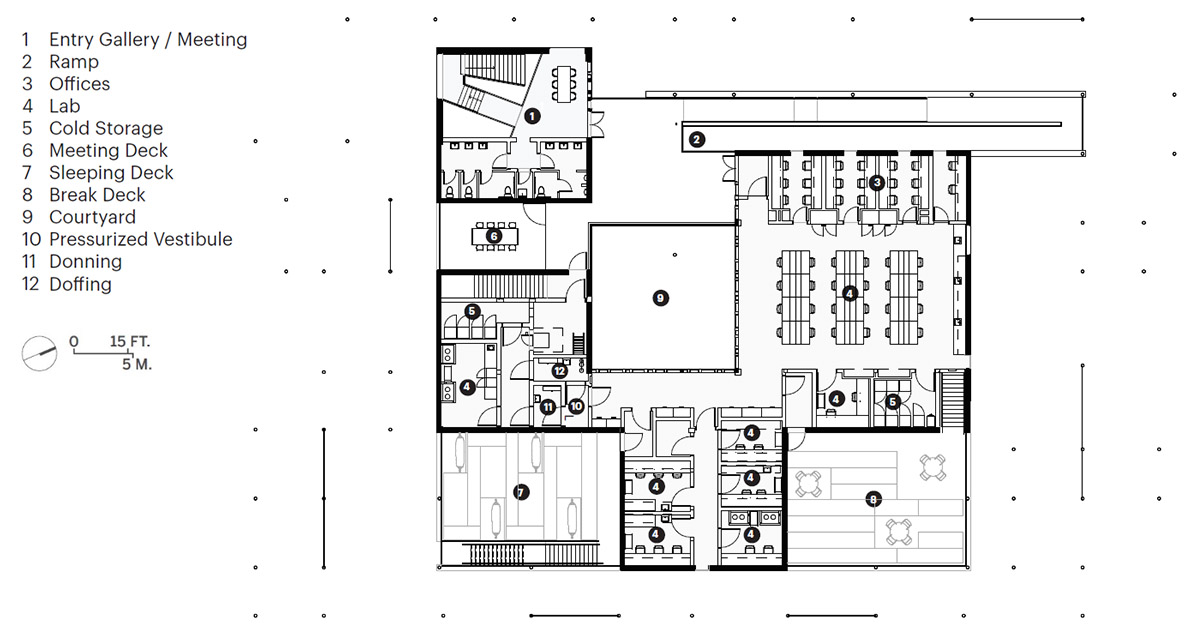 In the wake of COVID-19, a growing awareness has emerged about the role of design in keeping people safe. But, cautions Ricks, “we want to design for people—not pathogens—by creating spaces that are dignified and healing, and not just about mitigating risk.” While taking lessons from these projects, his team stays focused on the larger picture: how to leverage local resources, keep as much money as possible in the local economy, and build for a climate-positive future. “We can’t lose sight of those bigger agendas and just think about emergency response,” says Ricks. “This is about building long-term resilience and building for public health—global health.”