In 2014, the New York Public Library (NYPL) cancelled controversial plans to renovate its flagship Stephen A. Schwarzman Building in Midtown Manhattan. The proposal had called for selling off the library’s Mid-Manhattan Branch—kitty-corner from the Schwarzman on Fifth Avenue—to help fund the transformation of the magnificent main Beaux-Arts building from a research center into an exhibition space and a library focused on digital resources. The extensive interior redesign by Foster + Partners incited protests from preservationists and scholars alike before finally being shelved.

So, on June 1, when the newly renovated Mid-Manhattan Branch—now named the Stavros Niarchos Foundation Library (SNFL)—opens for browsing, Foster’s scheme may fade once and for all into hazy urban lore. Indeed, the library’s leadership whisper about the past furor as “the plans we shall not name.”

A Library Transformed. Video by Victor Chu, Director/Producer of Sky Tech One

Designed by the Dutch firm Mecanoo and New York–based architect of record Beyer Blinder Belle, the SNFL forms a Midtown campus with the Schwarzman building, nodding to the 1911 Carrère & Hastings landmark in its materiality and modern grandeur. An angular green aluminum roof, which Mecanoo’s founder and creative director Francine Houben calls the “wizard’s hat,” conceals mechanicals and asserts itself among its more ornate and patinated mansard neighbors.

To bring about the branch’s impressive metamorphosis and pack in a demanding list of programs, including a central circulating library with almost 2 million items, children’s and teen spaces, business and learning centers, and the addition of a conference and event room that sits underneath the “wizard’s hat,” Houben gutted the 1914 structure, leaving its masonry shell and steel frame intact.

The library had occupied the Arnold Constable & Company department store building since 1981. NYPL chief operating officer Iris Weinshall says the adapted building was universally thought of as “disgusting,” with its old escalators and stacks pushed against the windows, blocking daylight. Houben’s first move was to create an inviting ground-floor lobby. Existing columns were painted dark gray and fitted with uplit sconces; like streetlights, they line an internal, red-carpeted thoroughfare that runs from the Fifth Avenue entrance back to an information desk, with a canopy of wood slats on the ceiling above. 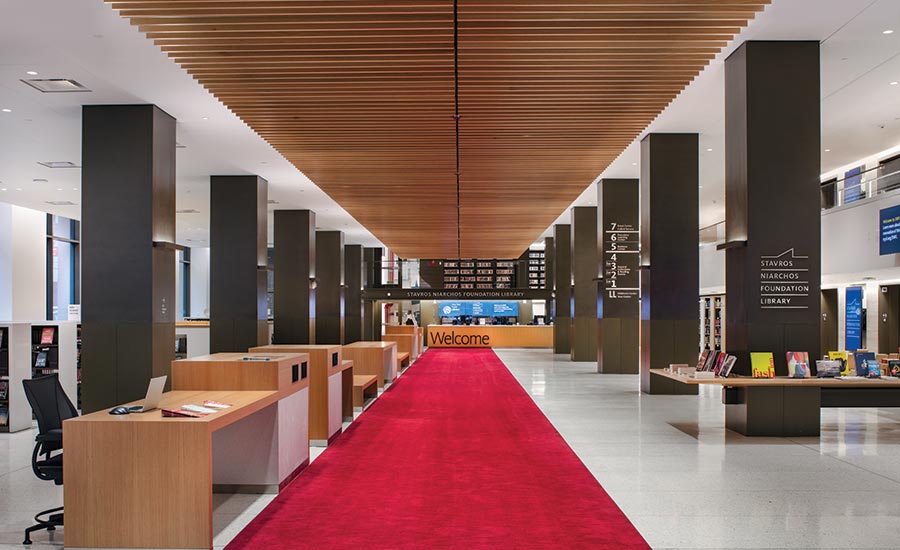 The lobby is designed as a column-lined “street.” Photo © John Bartelstone, click to enlarge.

A fan of long wood tables, Houben suspended custom oak slabs between the columns for bookstore-like displays. On other floors, these same monumental surfaces are reading tables. “It’s important for me that these long tables create a special atmosphere, with the lights,” says Houben. “It gives a kind of warmth. A library has many mini-libraries within it.” 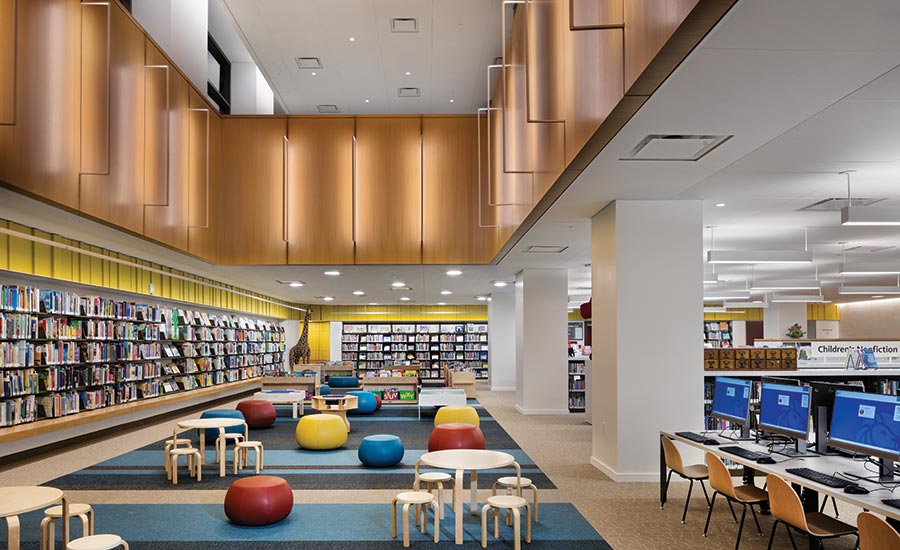 A rectangular wood-clad void in the lobby floor leads to the children’s library on the lower level. Photo © John Bartelstone

A large rectangular void in the lobby floor plate provides access by stair to the children’s and teen’s spaces on the lower level. Each are given their own distinct areas and entrances. And a new window into the book-sorting room, with its mechanized conveyor belt, allows children to see what happens after they return an item. 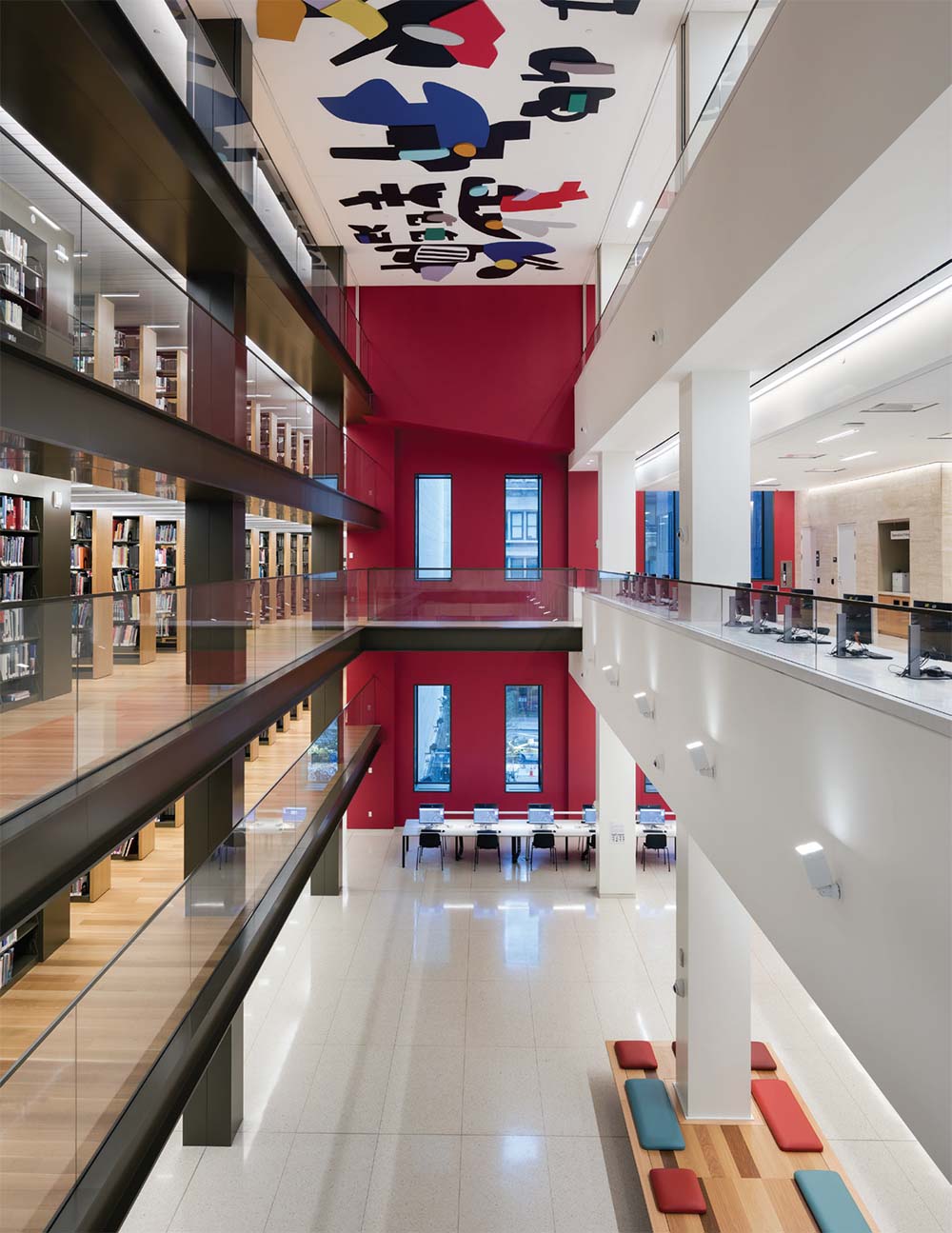 Mecanoo carved out a three-story atrium, with more book stacks and a ceiling mural by Hayal Pozanti. Photo © John Bartelstone

By far, Houben’s most striking decision was to create what she calls a “Long Room,” the heart of the library, by carving out a triple-height atrium from the second story to the fifth-floor ceiling—essentially chopping off the eastern ends of the second and third floor plates. On the east side of the void, the architect inserted an extra two floors, creating a total of five levels of flexible, browsable book stacks.

The elegant Long Room (a reference, says Houben, to Trinity College Dublin’s famous barrel-vaulted stacks containing 200,000 of its oldest books) is also an homage to Schwarzman’s original iron-and-steel stacks (which would have vanished in the Foster plan). Generous reading rooms sit across the void to the west of the stacks, connected by a bridge at the third floor. “It was quite a structural feat,” says Beyer Blinder Belle managing partner Elizabeth Leber, “to cut away three slabs and put in five. We had to cut it back and shore it, and the stack floors are all independently structured with very thin slabs.”

The fifth and sixth floors house a business center and learning center, respectively. In addition to concealing mechanicals, the sculptural green roof creates a new seventh floor that sits on a raised parapet for the event center, which is connected to a café. All are surrounded by a public terrace and garden overlooking the main library across Fifth Avenue.

Mecanoo and Beyer Blinder Belle were chosen in an RFP process for their combined skill with public buildings and New York City know-how. “We called Houben the library whisperer,” says Weinshall. She and her team visited Mecanoo’s libraries in Amsterdam and elsewhere in the Netherlands, and in Birmingham, UK; and D.C., where Houben renovated Mies van der Rohe’s Martin Luther King Jr. Memorial Library in 2020. Their endeavor was serious: “This is our premiere branch in the New York Public Library system,” says Weinshall.

If civic spaces exist on a scale from most generous and accessible to least, it could be argued that the SNFL is one of the most important public buildings to be created in the last couple of decades. For the many patrons who will come to read a book and sip a cup of coffee on the 7th-floor terrace, “air rights” will mean a very different thing. 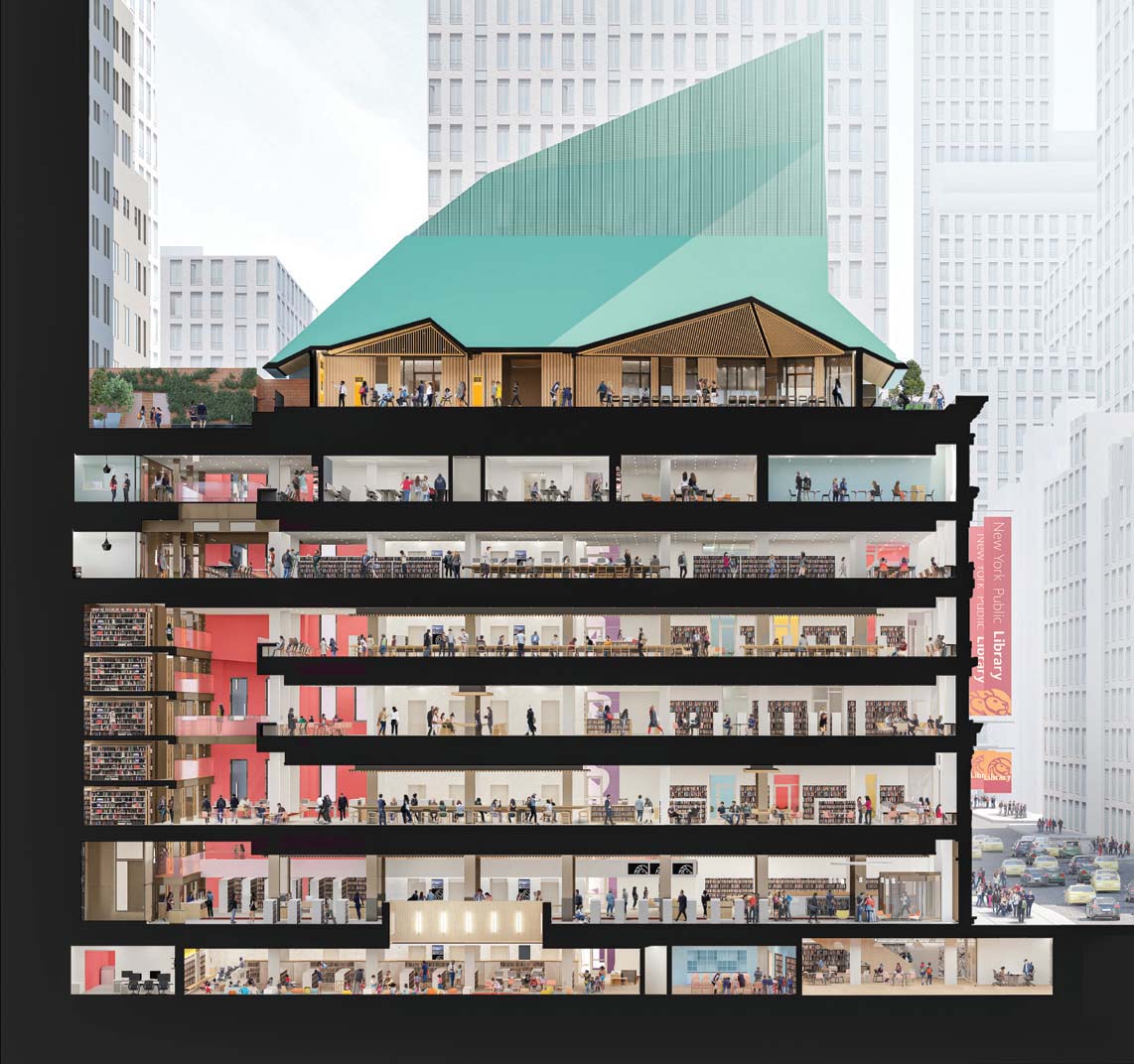