Before the pandemic, architect Frank Barkow (living in Germany, teaching on the East Coast, and with roots in Montana) was stuck in what he terms the “airplane-every-week rat race.” So when he bought five acres of his brother’s farm outside Bozeman for a house of his design, it was with the idea of spending longer, less frenetic stretches there, with more elbow room than in his Berlin office. By completion of construction, however, the world had changed.

Conceived as a live/work retreat for his family (wife Regine Leibinger, his partner in the firm Barkow Leibinger, and their two sons), the house now outperforms itself, accommodating Barkow’s teaching, both off-site (Zoom for Princeton and Cornell) and on (Montana State University architecture students co-opting areas of the property for design-build explorations). In the past year, the place has necessarily evolved, he says, “from a leisure outpost to something more active and ambitious—from fly fishing to base camp.” 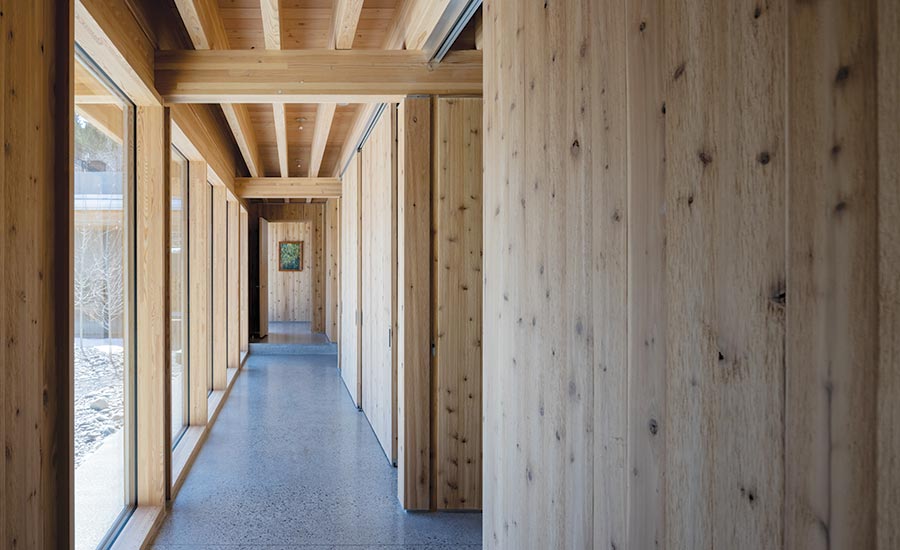 In designing his Montana retreat (top), Berlin-based Frank Barkow of Barkow Leibinger, opted for a courtyard plan, seen from the hall (above). Photo © Iwan Baan

Under a level roof, the house—3,400 square feet of enclosed space wrapped around an open courtyard—steps incrementally downslope, its floor slab conforming to the site. The roof provides a horizontal datum to the spiraling pinwheel plan, where living spaces, bedrooms, and the heated garage (at times student central) compose the broader ell, and a studio, sauna, and covered patios the narrower. Views open and close in a clockwise rotation from the entry to take advantage of the orientation (mountains, creek) on three sides. 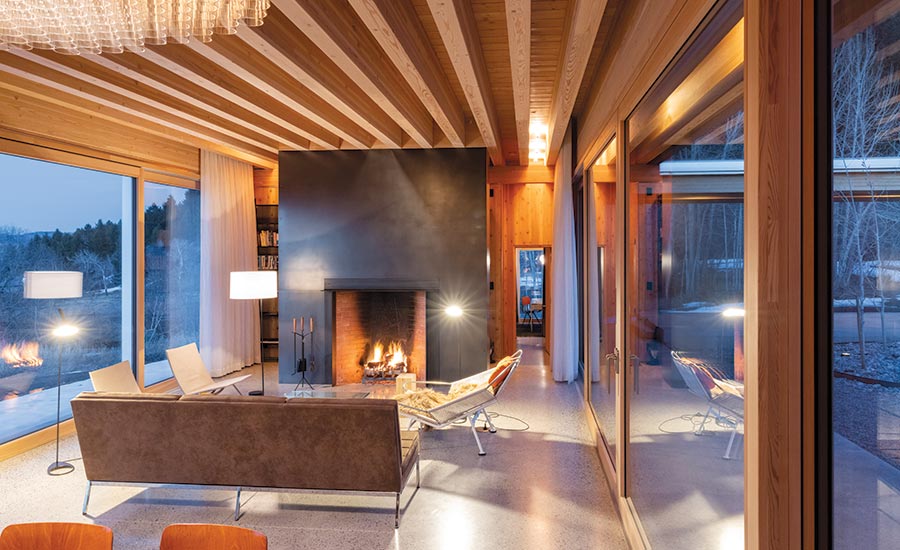 The living room has views on one side to the courtyard and on the other to the surrounding landscape. Photo © Iwan Baan 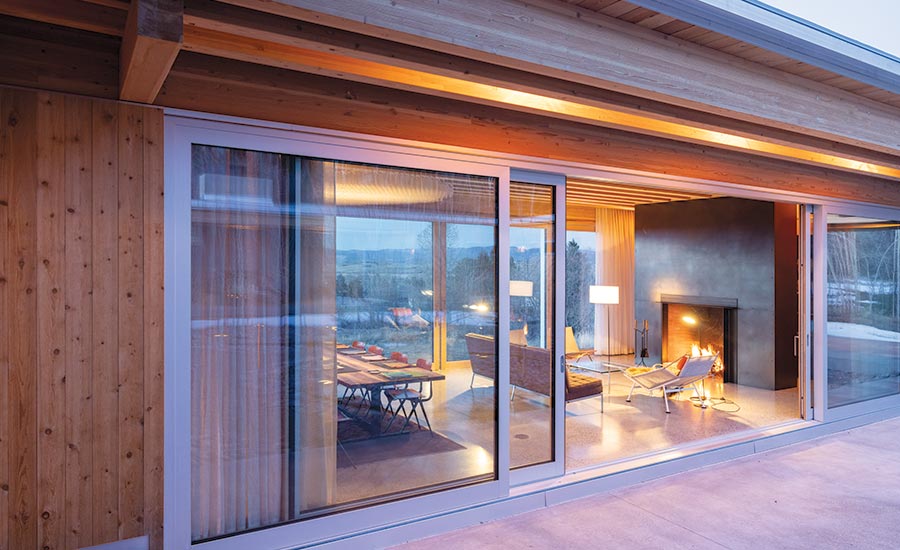 The living area opens on to the courtyard. Photo © Iwan Baan

The courtyard, atypical for the region, is an introverted counterpoint to the expansive outlook and gives the living/dining room perspectives in both directions. Stands of aspens, echoing those just beyond the walls, are set in locally sourced rainbow rock, ringed by embedded steel hoops. The trees create a volumetric form within the void—linear nature inserted into a linear structure—deftly accomplishing the design objective for this space: to be neither static nor hyper-contained.

The house’s subtly shifting dynamic (“how it all puzzles together,” says Barkow) is as evident in the rock garden, where the steel hoops graphically mark the different ground levels, as when progressing through the interior, in which the single-loaded rooms gradually increase in height, due to terracing. 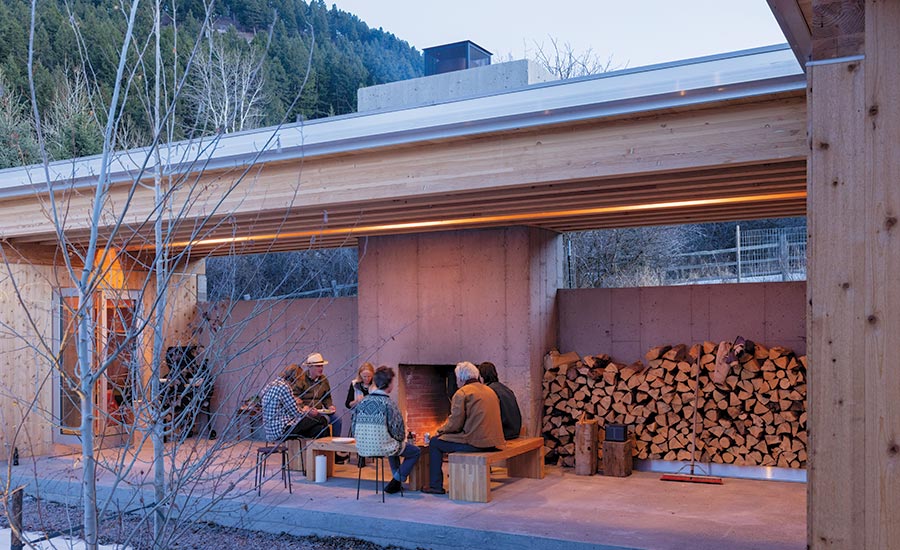 For those craving outdoor air, there is the open fireplace on a covered patio. Photo © Iwan Baan

The material language is rough and vernacular. Construction is sustainable timber offset by concrete floors (inside, terrazzo) and a concrete fireplace/wall in one of the two patios facing the courtyard. Rigid insulation on top of a timber roof deck allows for exposed glulam beams, which emphasize the pinwheel concept by running the long way (parallel to the exterior walls) in each leg of the plan. Depending on exposure, the knotty cedar vertical siding will weather in phases. “That natural process will have its own beauty,” Barkow notes. 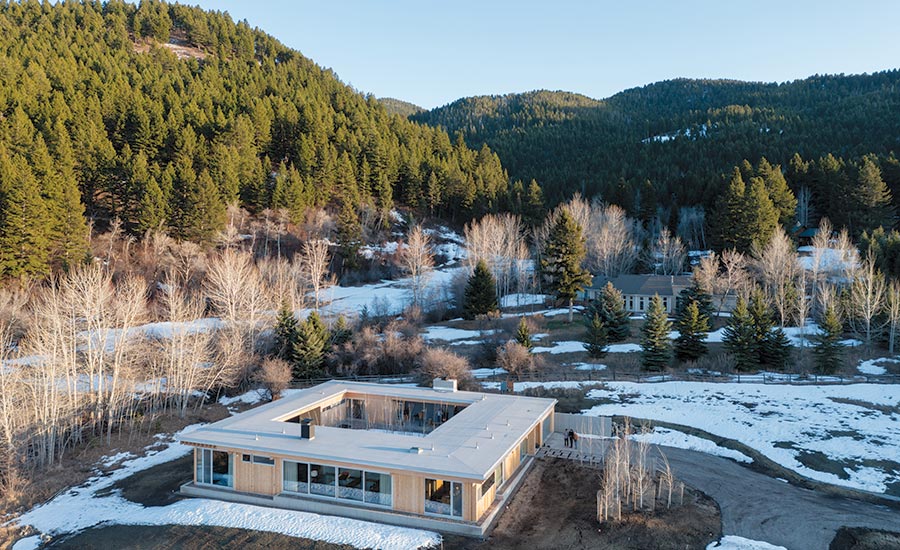 Aspens are planted in the courtyard. Photo © Iwan Baan

Built by John Barkow, the brother and Montana principal of OSM Construction, the house alludes to Bozeman’s architectural context, which includes a small log house by Richard Neutra, and the rustic modernism of Hugo Eck and Ozzie Berg. “The history here was important to me,” says the architect, citing a 19th-century barn on the property as a totem of rugged Western pragmatism. 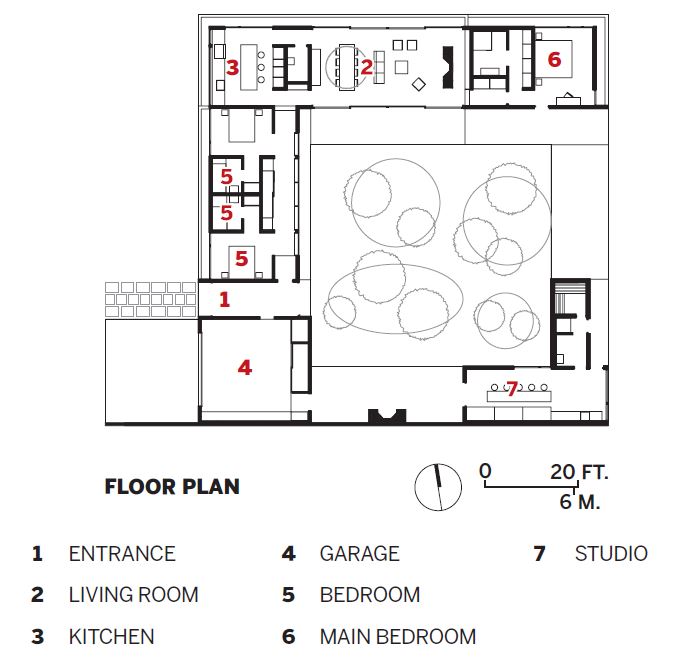