Narrow your eyes, and the 20th annual Serpentine Pavilion looks like the kind of ruined neoclassical folly you might find in the 18th-century parkland of London’s Kensing­ton Gardens. Look more closely, and its thick walls and fluted columns tell a more contemporary story about the city and its inhabitants. Designed by 31-year-old Sumayya Vally of the South African practice Counterspace, the monumental structure is based on a study of gathering places where London’s migrant communities have found a sense of belonging. They range from institutions such as churches and cultural centers to spaces of everyday life in multicultural areas such as Hackney and Peckham. The architect has also reached out to some of those neighborhoods by placing small satellite structures—conceived as fragments of the pavilion—in four local cultural spaces.

“We have a focus on working with all of London’s communities,” says Hans Ulrich Obrist, the artistic director of the Serpentine Galleries, which hosts the pavilion each year. “We didn’t want the pavilion to be something that only happens on the gallery’s lawn. It also works with the urban tissue of the city.” 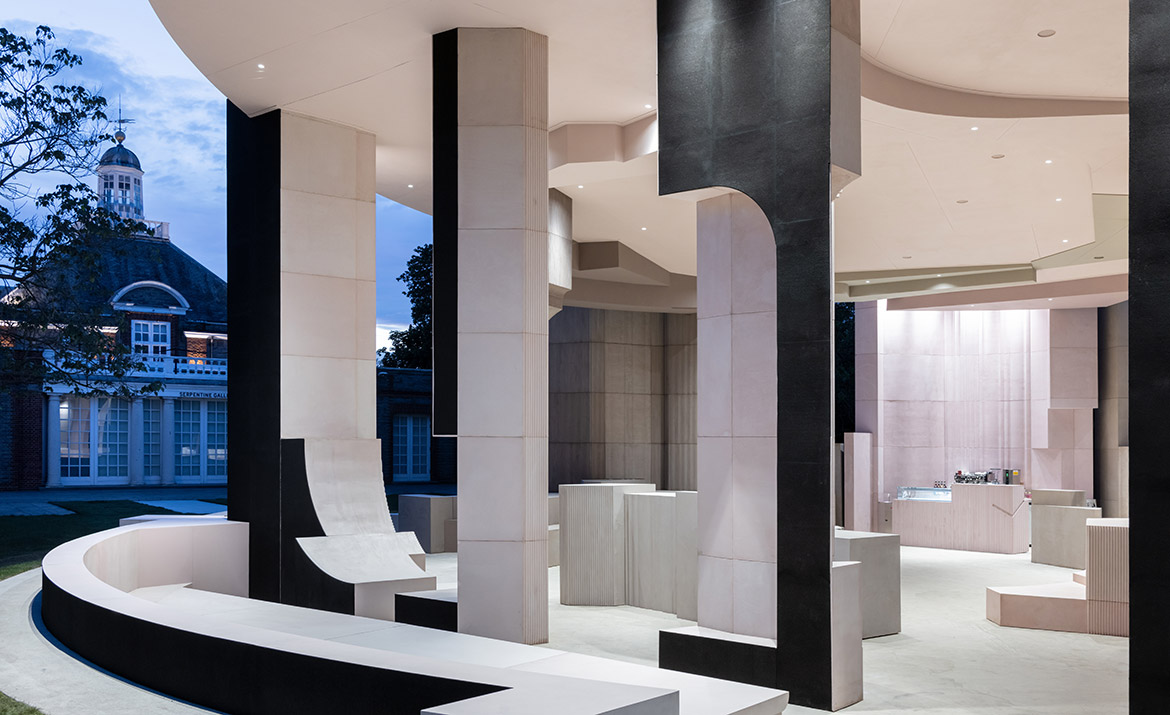 Over four months spent in archives and walking the streets, Vally compiled more than 50 reference cases, ranging from nightclubs to mosques and barbershops to publishers’ offices. Architectural fragments drawn from these spaces have been “abstracted, spliced, and superimposed” to generate the form of the 3,540-square-foot temporary events space with a café.

A roughly circular roof, 23-feet high, rests on 15 chunky columns, some of which resemble coursed stone, while others have a texture reminiscent of 1960s ribbed concrete. One column’s capital appears to be a cornice detail from a 19th-century house, enlarged to surreal proportions. Some elements are direct quotations: the base of one column recalls the slanted shelves of a bookstore. Others are more allusive: ruts in the ceiling seem to record traces of a vanished structure like a cast taken from a mold. 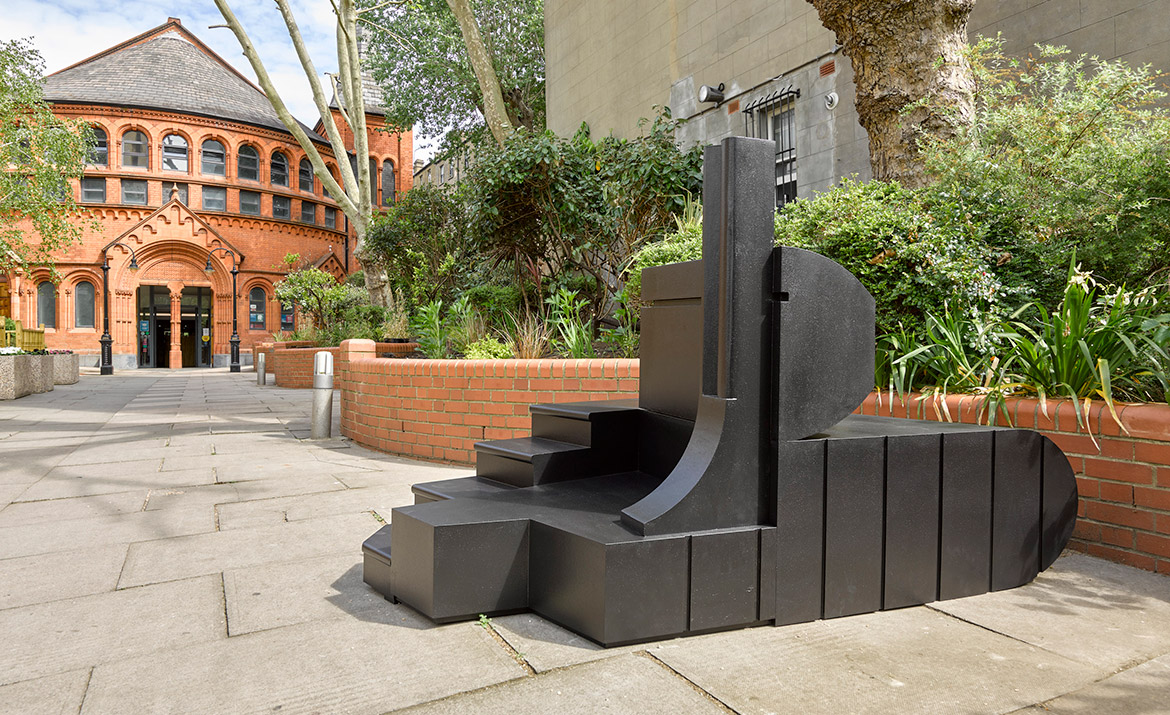 Fragment of Serpentine Pavilion 2021 designed by Counterspace for The Tabernacle. Photo © George Darrell

This architectural amalgam is a collective tribute to the places that Vally studied, but her design doesn’t give a distinct impression of them individually. “I didn’t want to make a literal representation of those spaces,” she says. “My aim was to honor them by looking closely, understanding how their architectural gestures have fostered gathering, and trans­lating that into new forms.” Looking at Iftar tables, on which Ramadan fasts are broken, gave rise to ideas about shared surfaces, for example. Likewise, Vally’s thinking about how people sit together was influenced by the porch steps where the Afro-Caribbean community in the Brixton neighborhood once met to organize politically.

Applying those lessons has produced a pavilion that is notably hospitable. “Its arrangement is meant to engender gathering in different ways, at different scales of intimacy, and to create a feeling of generosity,” says the architect.

Visitors enter by three paths that slice through a grassy berm surrounding the pavilion’s low perimeter wall. Large architectural fragments scattered around the interior provide seating and loosely define a square area for events within the circular plan. Around its edge, smaller places to sit are set at different heights, and might accommodate a group of friends or a one-­on-one conversation. People may drift among the columns before finding a ledge or bench on which to perch with a drink, or a shady niche with a view of the park. 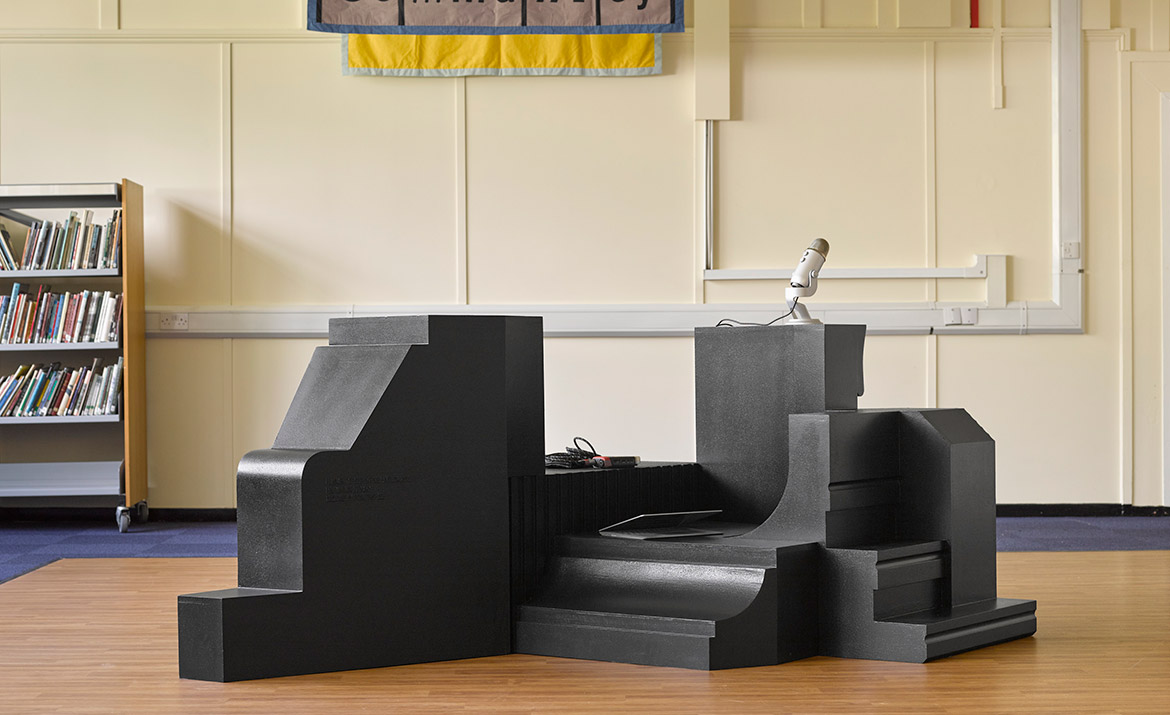 A slightly dreamlike ambience also owes something to the materials. While the outer faces of the columns are clad in dark-stained cork, the plywood surfaces of the interior have been given a unifying coating of micro-­cement in shades of pink and pale gray. “I wanted it to look as if the form has been carved out,” says Vally, “and to create an interior which is airy and soft, and responds to changing light through the day.” Plywood was not Vally’s first choice; an early plan to clad the building’s steel frame in custom-made eco-bricks proved too complex. Tactile, heavyweight masonry might have added something to the experience, but the innovative use of structure and materials isn’t central to Vally’s agenda, as it has been for some of the previous years’ pavilion designers. Her emphasis is on creating an evocative reflection on the importance of gathering spaces.

That theme was adopted before the Covid crisis, which delayed the project by a year. Months of lockdowns and social distanc­ing have given it increased resonance. As London emerges from what is hoped will be the last of its restrictions on coming together, Sumayya Vally’s pavilion arrives just in time.

AHMM Sheds Light Into a Deep, Bunker-Like Space for Its own Studio