When the call came to design the Serpentine Pavilion—the high-profile annual commission for a temporary events space in London—Theaster Gates naturally thought of clay. For the polymathic Chicago-based artist, pottery is the foundation of an extraordinarily diverse practice, extending from painting and performance to urban regeneration. “I think through vessels,” he says, standing under the inky vault of a voluminous rotunda set before the Serpentine Gallery in leafy Kensington Gardens, “though this may be the largest I’ve ever made.”

Gates’s preoccupation with “vesselhood” is central to the project, whose contents are as important as the container. Entitled Black Chapel, the pavilion is intended to evoke the qualities of sacred spaces, with live events reflecting the importance of spiritual art and music to Gates’s own work. Ceramics also inspired the building’s cylindrical form, which alludes both to distinctive English bottle kilns and more hallowed structures—circular Roman temples and African tombs.

There is little to suggest the numinous in the imposing stump that emerges through the trees as you approach. Wrapped tight in charcoal-gray roofing membrane, the somber cylinder resembles a silo—enigmatic in its context, maybe, but a little dull. Some humility is intentional, says Gates, the first artist to be solely awarded a commission that usually goes to architects. (The building was realized with support from Adjaye Associates.)

Black timber boardwalks stretch across the lawn to meet two tall, narrow portals; as you walk up, it’s hard to discern much in the dark interior. Step inside and a majestic space, 35 feet high, opens up—a taut wooden drum whose every inch is stained black. A monumental screen of rough timber planks runs between the portals, keeping a mundane cafe out of sight. An encircling ring of timber columns rises to a shallow domed roof with an oculus open to the sky, like a miniature Pantheon. When it’s sunny, a disc of bright light tracks around the walls. When it rains, water cascades to the floor.

When reverberating with song, the chamber should be spectacular. It works well for quiet contemplation, too. Sitting on the benches that line the curved walls, one finds that the space feels oddly intimate—warm and protective despite the eggshell thinness of the plywood walls. The shadowed backdrop lends emphasis to seven silvery “tar paintings” made from layers of torch-on roofing felt that hang above head height; this building is always getting you to look up. Their inclusion evokes the Houston chapel built to house giant canvases by Mark Rothko. Seamed and blistered, the panels add the earthy texture and sense of the maker’s hand that are characteristic of much of Gates’s work but are largely absent here.

Torch-on was a tool of the trade for Gates’s late father, a roofer, and is often used by the artist in works that explore labor, craft, and the value ascribed to production. Following his father’s recent death, they take on added significance. The pavilion is “a memorial to my history of making with him,” says Gates. This overtly personal pavilion has roots in Gates’s experience of singing in the Baptist church as a child. “I have a preoccupation with ecstasy,” he says, “and the unification of sound, body, and space.” It is also a hymn to the resilience of Black communities—“something to do with the ability to remain optimistic and active in one’s communal and spiritual life even though subjugation is all around,” he says.

The project’s intertwining themes are evident in the events program, in which the designer had unusual involvement. Alongside meetings of Black artists there will be clay workshops for children and a Japanese tea ceremony—Gates studied ceramics in Tokoname—and music from Gregorian chants to jazz.

Each will be marked by the tolling of a great bronze bell that Gates rescued from the demolished Church of St. Laurence on Chicago’s South Side and installed on the Serpentine lawn. Like many parts of the pavilion, it is in conversation with work elsewhere. A salvaged statue of Laurence himself is housed in Gates’s Black Vessel for a Saint, a temple-sculpture at the Walker Arts Center in Minneapolis that bears a strong resemblance to the pavilion.

In the past, the Serpentine has been criticized for its use of carbon-heavy concrete foundations. Here, the structural design by AECOM is notably leaner: the timber floor sits on small, removable pads. Parametric modeling minimized steelwork. And the designers worked with the Connecticut-based Grace Farms Foundation to audit materials for sustainable sourcing and reduce the risk of forced labor being used in the supply chain.

Gates initially hoped to make Black Chapel from clay brick, like the Walker Art Center building, but the budget and timeframe proved prohibitive. Its pragmatic construction lacks the depth of meaning found in the materiality of earlier projects, where provenance and the process of fabrication add to the narrative. There are echoes of Gates’s past work in the use of ordinary lumber and roofing felt, which are handled with some subtlety—the braced wooden columns and slender, radiating rafters have a barn-like beauty—but too much of the pavilion is closer to a simple, prosaic shed.

Nonetheless, there is much to enjoy here. Rich in ideas, atmosphere and sensation, this vessel and its contents are a generous celebration of congregation and an intimate portrait of the artist. 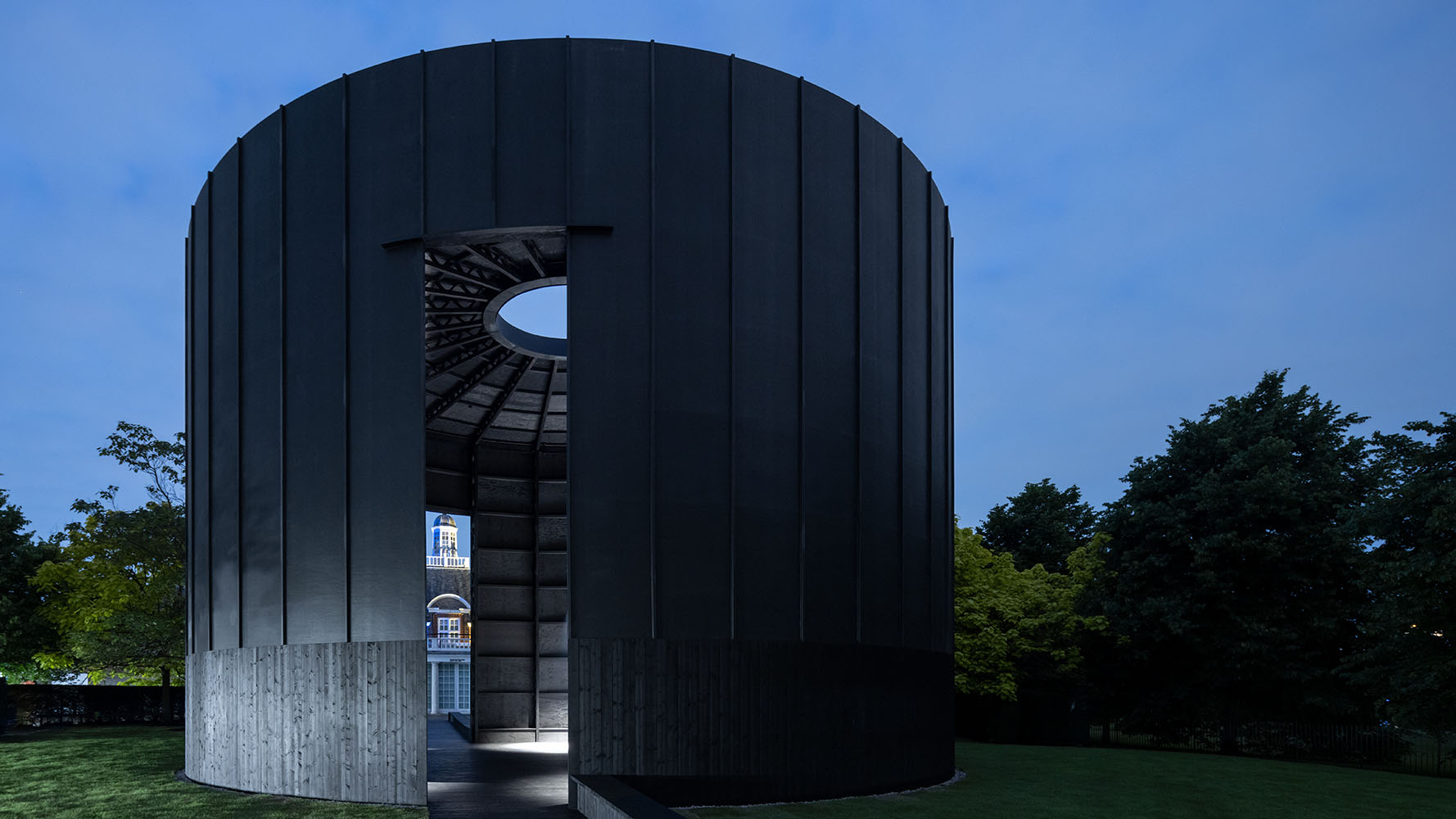