This website requires certain cookies to work and uses other cookies to help you have the best experience. By visiting this website, certain cookies have already been set, which you may delete and block. By closing this message or continuing to use our site, you agree to the use of cookies. Visit our updated privacy and cookie policy to learn more.
Home » Unbuilt Project by Mies van der Rohe Is Under Construction in Indiana
Architecture News

A building for Indiana University (IU), originally conceived by Ludwig Mies van der Rohe in 1952, is underway for the university’s art, architecture, and design school, in accordance with recently discovered drawings by the master.

Originally created for IU’s fraternity Alpha Theta chapter of Pi Lambda Phi, but never constructed, the design by the German-American architect was almost forgotten about for sixty years. In 2013 an IU alum and former fraternity member, Sidney Eskenazi, informed the university’s president Michael A. McRobbie about the existence of Mies’s drawings for the project. 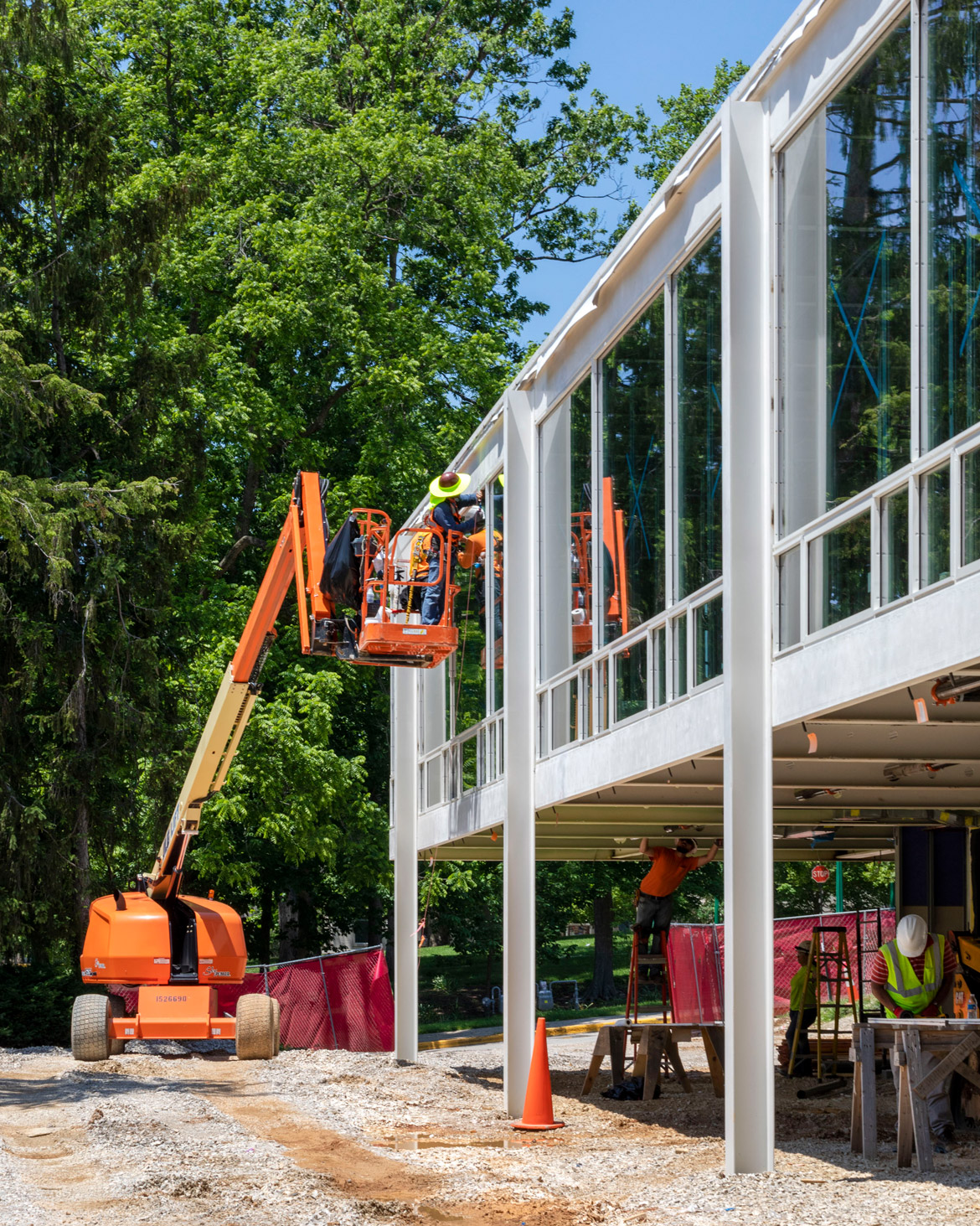 After receiving the news, the university located documents of Mies’s work in the archives of the Art Institute of Chicago and New York’s Museum of Modern Art and asked Thomas Phifer and Partners to execute the project. (The New York firm was already working on IU’s new Ferguson International Center Across across the street). “To have it emerge from nowhere and on a site and campus like this, presented  a remarkable opportunity,” Phifer told Record. But rather than being used for a fraternity house, it will now be the Eskenazi School of Art, Architecture + Design.

According to Phifer, the team undertook an “enormous amount of research” to bring Mies’s building up to the 21st century while keeping the scheme basically the same. “The proportioning of the building, the glass, and the volumes had to stay because this is a Mies building,” Phifer says. “Those proportions determine the success of the architecture.” 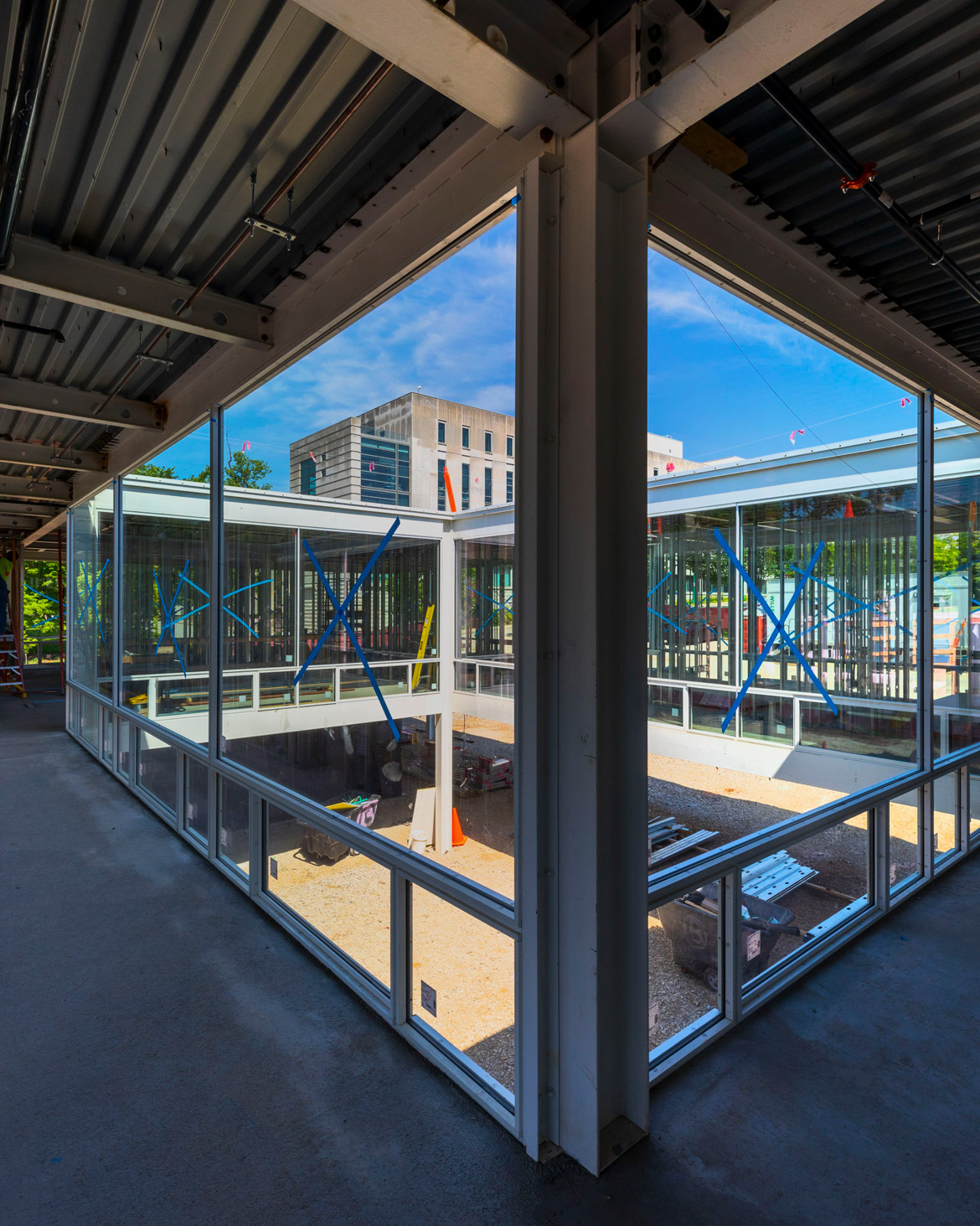 In adapting Mies’s design, Phifer worked with mechanical, structural, and environmental engineers to come up with details and the proper precautions “so that it performed up to the standards we expect today,” he says. Despite these adjustments, the building design is virtually the same as when Mies created it: “We had to keep exactly the proportions that Mies intended, which are extremely thin —the mechanical packages for floors and ceilings are specific dimensions.”

The bedrooms for the fraternity have been swapped for offices. “The plan is  just flipped from a place to sleep to a place to work,” Phifer explains.

Called the Mies Building and planned for a fall opening, the two-story project is 10,000 square feet and measures 60 by 140 feet. The steel-frame building is supported on white-painted steel columns. While much of the ground floor is open to the outside, a small enclosed space contains the lobby, staircase, and elevator. Wrapping around the second level are floor-to-ceiling windows with 10- foot -square panes . A central square atrium punctures the flat roof.

Because the structure is located on top of a hill, Phifer notes  “When you approach it, it has a kind of heroic quality like so many of Mies’s works. It has a temple-like presence due to its simplicity and its columns. But then when you walk into the building, it has an intimacy that is remarkable.”

IU’s Mies Building is similar to Mies’s Farnsworth House in Plano, Illinois, and the two have similar design philosophies and materials. The two projects were also conceived around the same time.

The design is also similar to Mies’s buildings that he designed for Chicago’s Armour Institute of Technology, where he served as head of the architecture school, and which later became known as the Illinois Institute of Technology (IIT). Mies joined the school after fleeing Nazi Germany in 1937, when he served as the last director of the Bauhaus School. In Chicago, he established his practice and lived there for 31 years, where he went on to complete significant works such as the residential towers of 860–880 Lake Shore Drive and 900-910 North Lake Shore, and the Chicago Federal Center complex.

“As someone who worked with my grandfather Mies van der Rohe since 1957, I thought I knew all the projects he ever worked on,” said architect Dirk Lohan, grandson of Ludwig Mies van der Rohe, at the dedication ceremony today, June 17. “But I never heard about this project until Indiana University contacted me about its wish to build this 70-year-old design.”

The dedication of the Mies Building was held as McRobbie completes his 14-year tenure as university president. Under his leadership, IU has also renovated Myron Goldsmith’s 1971 Republic Building for the J. Irwin Miller Architecture Program in Columbus, Indiana. Sidney and his wife, Lois Eskenazi, donated $20 million for the realization of Mies’s project.