Upon approaching the recently completed “Mies van der Rohe Building” on the main campus of Indiana University (IU), one might reasonably be excused for thinking the pioneering German architect is alive and well. The “new-old” building, completed by New York’s Thomas Phifer and Partners, gives life to an unrealized and little-known Mies project for a Pi Lambda Phi fraternity house that was originally conceived in 1952. More than fulfilling a retooled program, the white steel-and-glass pavilion is a luminous billboard for the recently established Eskenazi School of Art, Architecture + Design, and contains offices and meeting rooms for faculty and staff. The 10,000 square feet of carefully executed spaces came with a substantial price tag: $10 million. Phifer’s Lazarus-like revival of the 70-year-old design will seem remarkable to some, and perhaps peculiar—even downright problematic—for others. Since the building is neither a reconstruction of a razed Mies building, like the Barcelona Pavilion, nor a refurbishment, like the one executed by David Chipperfield Architects for the Neue Nationalgalerie in Berlin, it is difficult to shake the feeling that the Eskenazi is, at least in part, another example of nostalgia for Midcentury Modern. 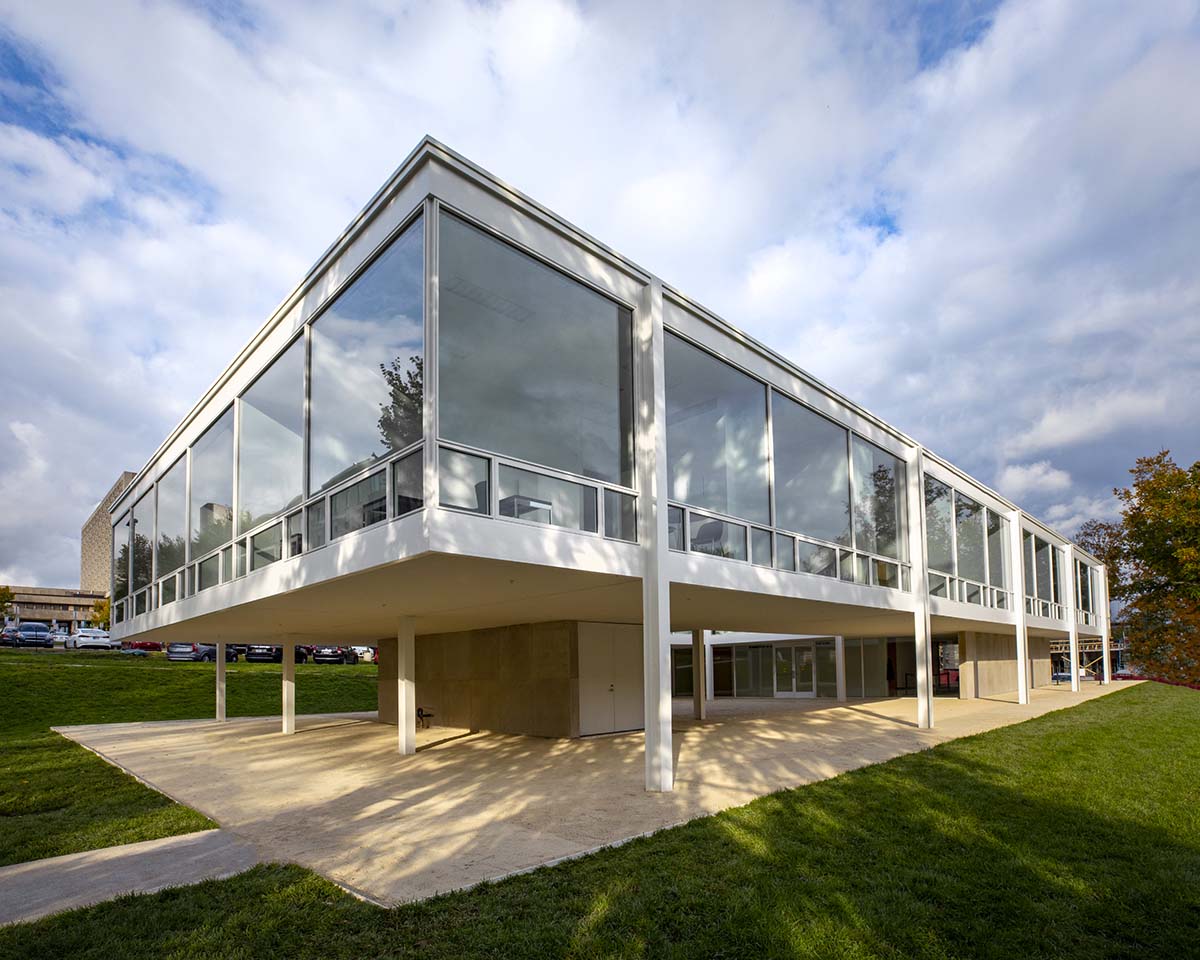 This building is central to a bigger story unfolding as the Eskenazi School seeks to position itself, thanks to plans set in motion by former IU president Michael A. McRobbie, within the landscape of regional, national, and global design education. Established in 2016, the school was formed by merging IU’s departments of studio art, apparel merchandising, and interior design. Architecture was added in 2018 when McRobbie launched the J. Irwin Miller Architecture Program in the repurposed nationally landmarked Republic Building in nearby Columbus, Indiana, designed in 1971 by Myron Goldsmith, a Mies student and former employee. Both of these buildings—a “historic” one in Columbus and the “Mies van der Rohe Building” in Bloomington that conspicuously bears his name—demonstrate that Mies’s legacy continues to spark serious interest. 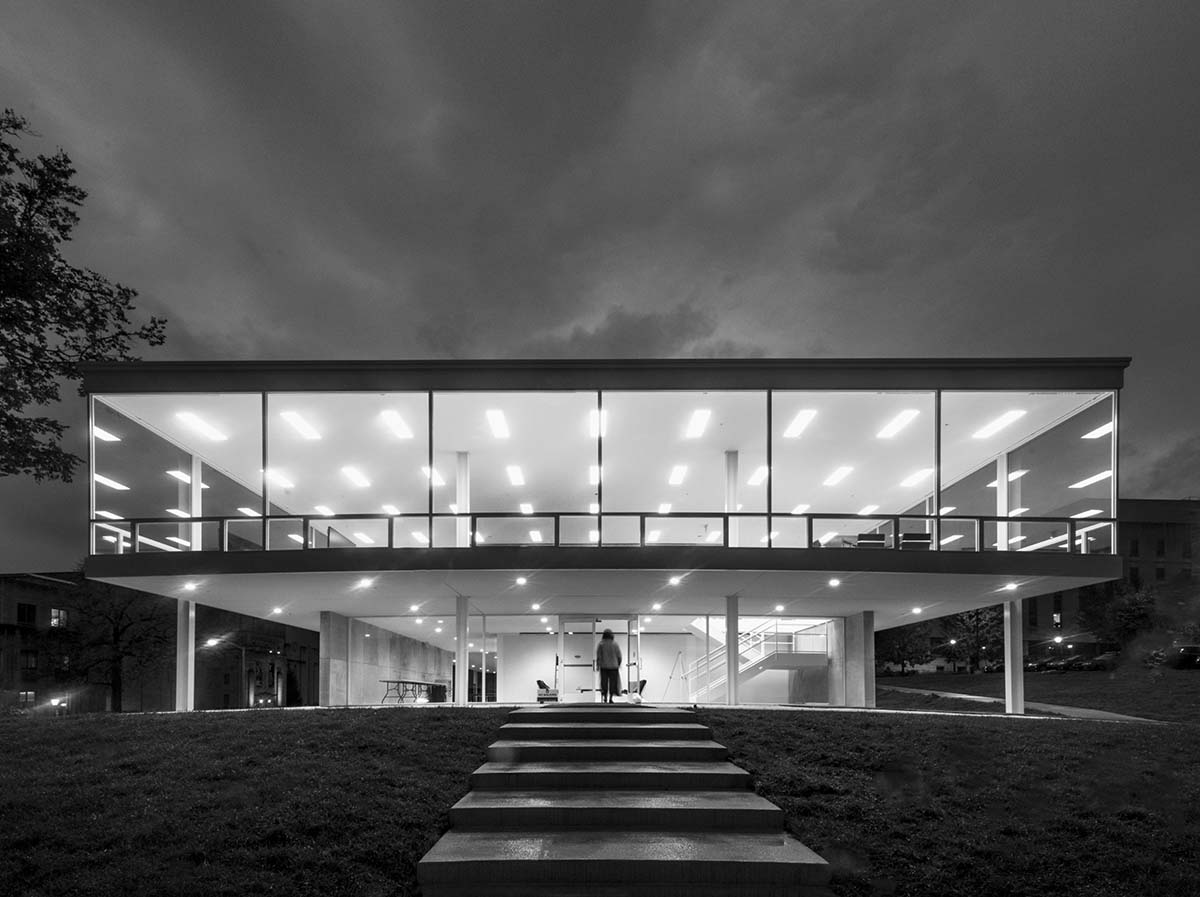 The 1950s drawings for Pi Lambda Phi were initiated by Mies, and subsequently developed by his associates Daniel Brenner and Goldsmith; the project documents were located in the archives of the Art Institute of Chicago by IU’s associate vice president of capital planning and design Adam D. Thies, shortly after shopping mall developer and philanthropist Sidney Eskenazi mentioned the unrealized fraternity house to McRobbie. Pi Lambda Phi was established with a mission centered upon resisting discrimination. Eskenazi was a member of the progressive fraternity while pursuing his law degree at IU when the plans for the Mies-designed house were first being developed. Regrettably, the scheme was abandoned due to lack of funds. The conversation between Eskenazi and McRobbie jump-started new interest. For a developer, supporting a somewhat nostalgic initiative for a “new-old” building might seem out of character, but as excitement grew surrounding the feasibility of the “rebirth” of the Mies project, he and his wife, Lois, sealed the deal by pledging $20 million to cover the building costs, along with various other forms of support. 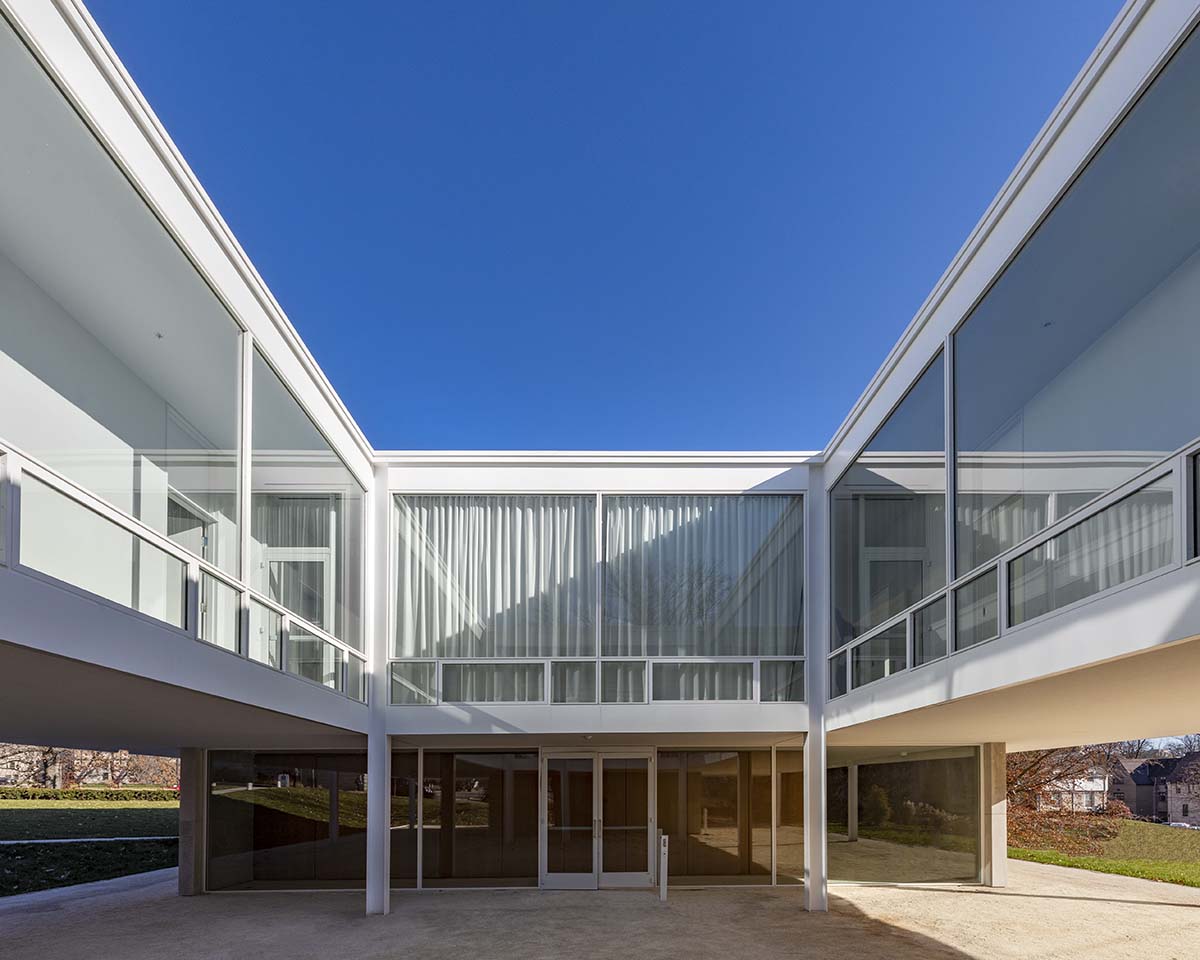 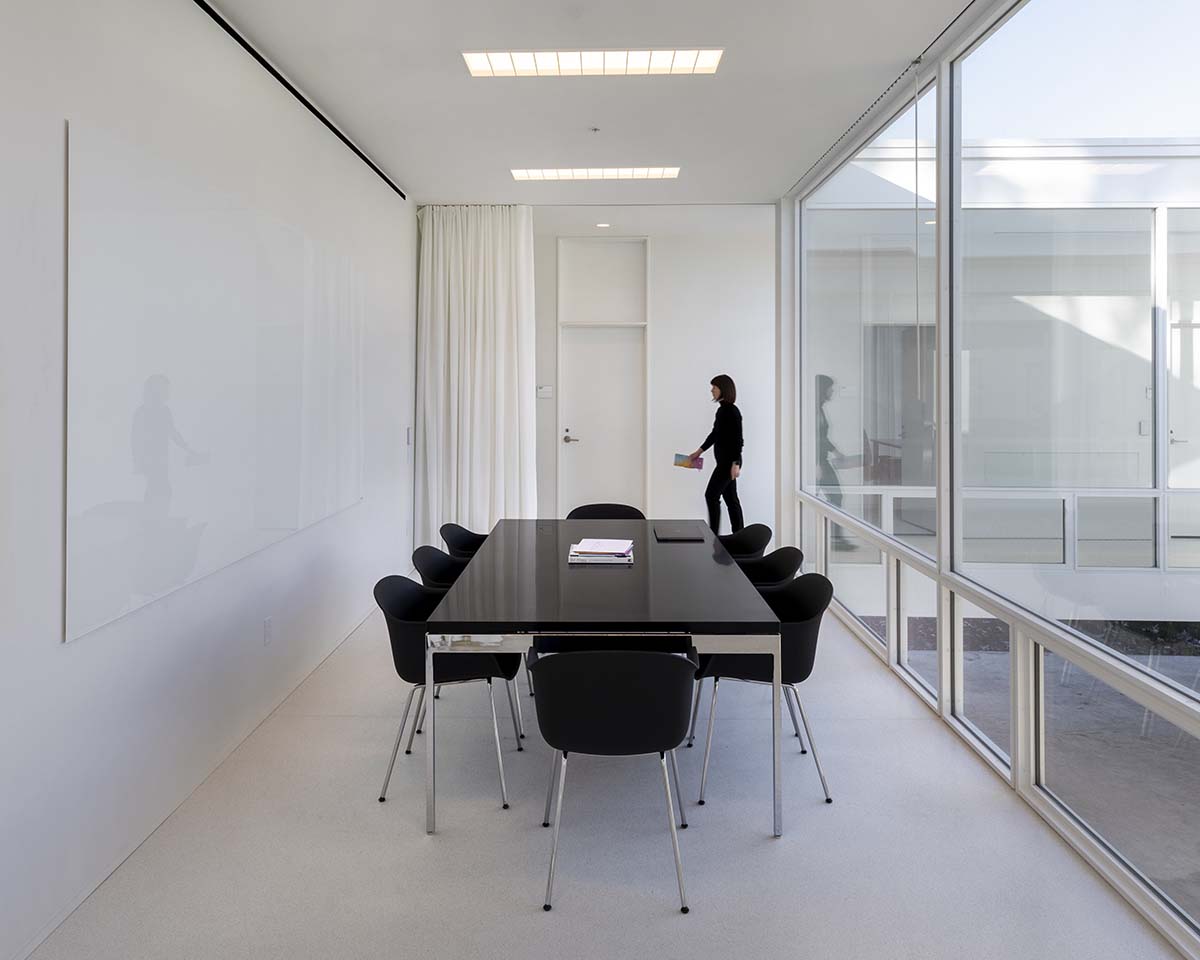 Phifer and his partner Stephen Dayton scrupulously studied the original plans and construction details while comparing them to other Mies buildings of the period. Phifer had spent some time in Spain during the reconstruction of the Barcelona Pavilion and was fascinated by the initiative. Adapting a 1950s design to contemporary building and energy codes—as well as ADA standards—required ingenuity. In addition to adding an elevator, Phifer had to ensure that modern mechanical, electrical, and plumbing systems fit within the relatively tight 15-inch-high first- and second-floor ceiling cavities. Minimal material and component tolerances for the steel frame also required careful coordination among various building trades and the architectural team. 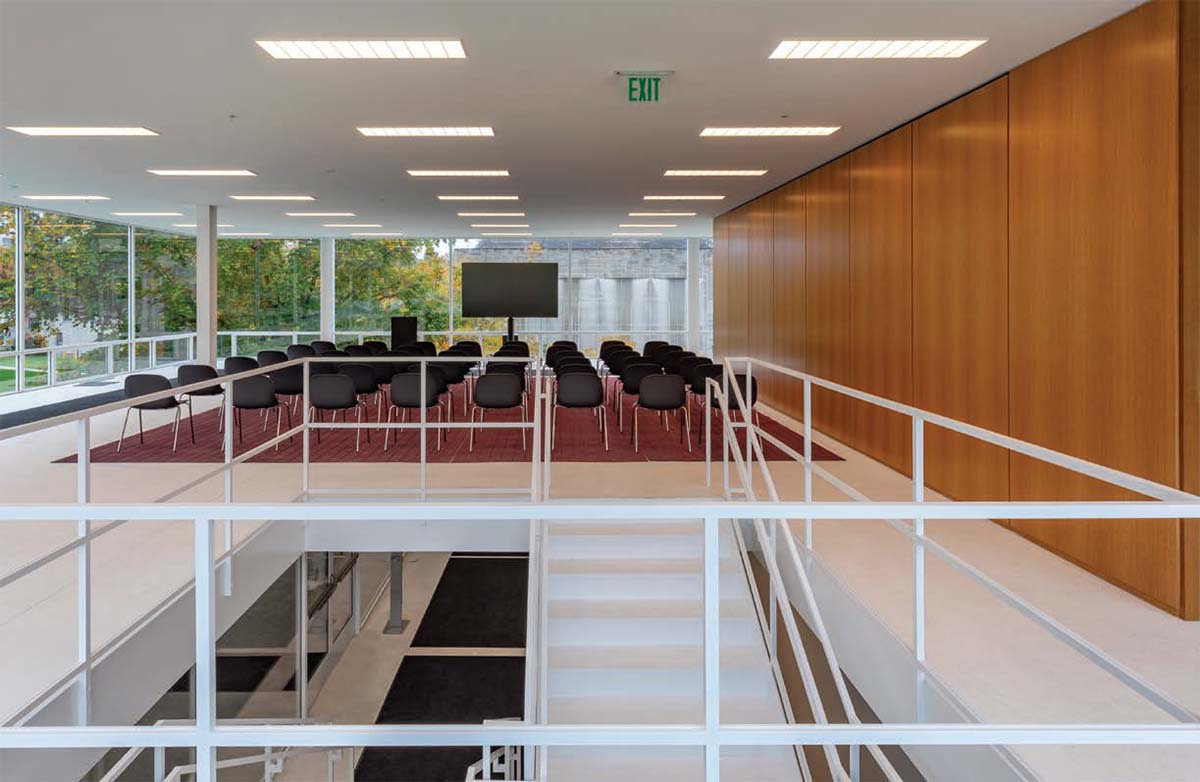 To comply with life-safety codes, a stair was added at the west end within the original volume, and the original open stair at the east end has been modified. Photo © Hadley Fruits

But there clearly are pitfalls to modifying a “historic” design’s function and siting. The Pi Lambda Phi scheme, originally set on a tight city lot, elevated the building to provide space for cars to park below. The completed building now occupies an artificially elevated ground plane covered with cream-colored crushed granite. And though, ironically, it occupies a former parking lot, no cars can get anywhere near it. Nevertheless, this raised pavilion recalls one of the key concepts Mies developed during those years, when he was working on the Edith Farnsworth House, Crown Hall, and Cullinan Hall at the Museum of Fine Arts Houston. However, while Crown Hall was painted “Detroit Graphite,” the exposed steel structure of the Eskenazi building belongs to a small but important group of structures like the Farnsworth and Cullinan that were painted white. 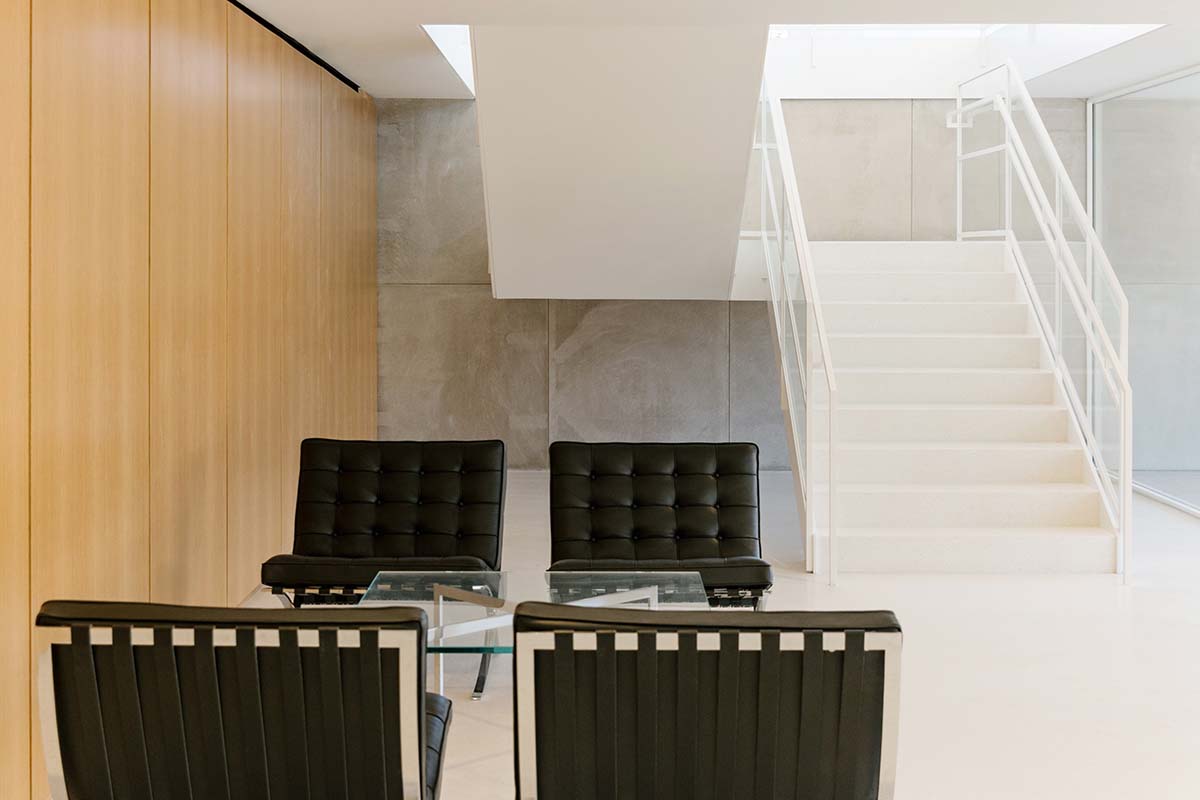 Although Phifer’s team worked tenaciously to follow construction materials and details originally specified, there are questions that naturally temper one’s excitement in experiencing firsthand a “new-old” Midcentury Modern building. “Realizing a building by a deceased architect can be very problematic,” says preservation architect T. Gunny Harboe, who has extensive experience working on landmarked Mies and Frank Lloyd Wright buildings. “It’s one thing if the building is reconstructed, but starting from scratch like the case in Bloomington, even if done by a distinguished living architect, raises a series of existential questions. At the end of day, is it a Mies building or a Phifer building in the manner of Mies?”

On the opposite side of the street from Eskenazi is the four-story Ferguson International Center, also by Phifer, scheduled to open this summer. Together with the Mies building, the two projects bring a formidable dose of contemporaneity to the IU campus. Indeed, the white-painted steel of the Mies gives it an appearance of weightlessness on a campus freighted with many beautiful but lumbering limestone buildings. While the “Mies van der Rohe Building” at Indiana University is a fascinating example of Mid-century Modern design adapted to a new site and program for 21st-century users, it ultimately raises questions for a school that is training future leaders in architecture and design. Even if Phifer’s remarkable study in deference to the “master” deserves high marks, a new building designed by him rather than a “new-old” building by Mies van der Rohe would have undeniably expressed greater optimism for our own times. As someone who embraced change, I think Mies might have agreed.

Michelangelo Sabatino is a professor of architectural history and cultural heritage at Illinois Institute of Technology’s College of Architecture.