The office of Richard Meier & Partners is announcing today that the practice, begun by the award-winning architect in 1963, will now be called Meier Partners, and that its 86-year-old founder is officially retiring. Under a leadership restructuring plan, George H. Miller, former managing partner at Pei, Cobb, Freed, becomes COO, and Dukho Yeon, who has been at the Meier office for 30 years, will be lead designer. Both Miller and Yeon have been named partners, each with equity in the company.

Previously, Michael Palladino, who ran the California office of Richard Meier & Partners for 25 years, was the only non-family member with equity in the firm. Palladino is spinning off the Los Angeles office into an independent entity called STUDIOpractice, though he will remain a consulting partner with the New York-based firm, with a small equity stake. The Meier family continues to hold its longstanding stake in the company. Richard Meier’s daughter, Ana Meier, 40, who has been instrumental in this transition, will remain an advisor in the firm. 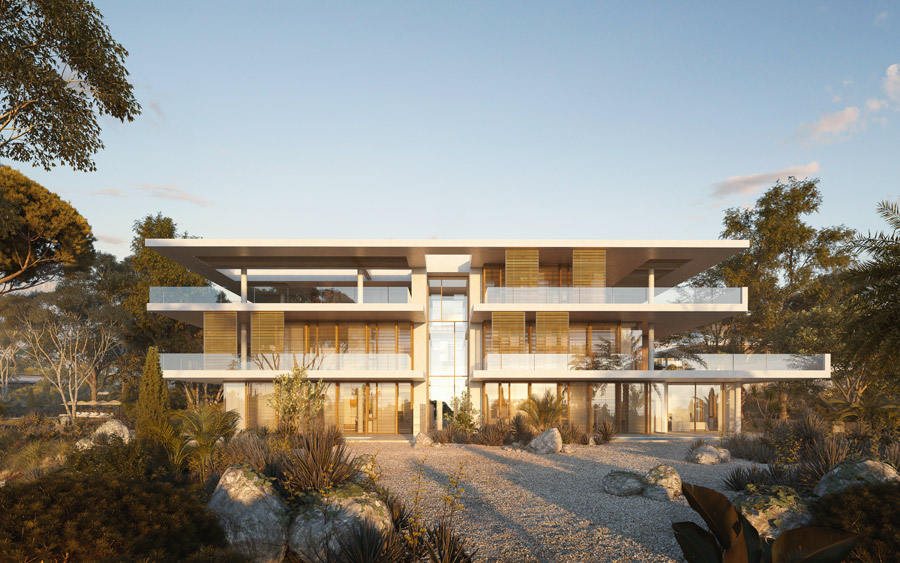 Rendering of part of a resort on the southern coast of Spain (2019-).

The Pritzker laureate and his practice have never really recovered from the fallout of the sexual harassment charges leveled at him in an article in the New York Times, on March 13, 2018, at the height of the #MeToo movement.  After five women described incidents of harassment to the Times, Meier released a statement saying he was “deeply troubled and embarrassed by the accounts of several women who were offended by my words and actions. While our recollections may differ, I sincerely apologize to anyone who was offended by my behavior.” Later, several other women came forward in the Times to relate similar experiences with the architect.

Among the first of the so-called starchitects, Meier was celebrated for his sleek and elegant structures and became a pioneer in the trend for architect-branded real estate developments, starting with his luxury glass Perry Street apartment towers in New York, completed in 2002. “His name adds $1,000 a square foot,” the late writer Dominick Dunne reportedly quipped at a launch party for the two-building complex. 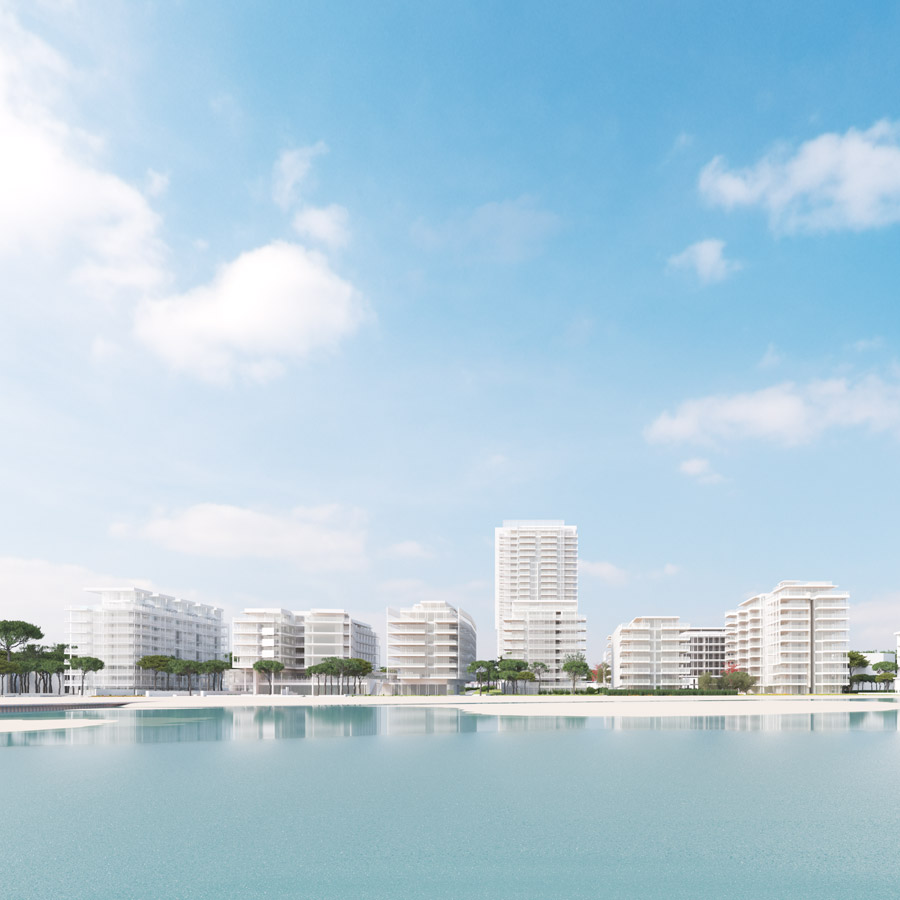 Rendering of a residential development on the sea in Jesolo Lido, Italy (2020-).

But in the aftermath of the Times’ articles, clients of ongoing U.S. projects distanced themselves, discreetly using the firm’s entire name and dropping Meier’s photo from ad campaigns. Since that time, virtually no new work in the U.S. has come into the firm.  However, projects in Asia and Europe have been ongoing and a substantial number of new projects outside the U.S. are in various stages of development in the office. And there are now some inquiries from potential American clients, according to the firm leaders.

The rebranding, with a new website launching today, is intended to reassert the practice on the foundation of the distinctive, finely-detailed architectural language that won Meier acclaim, while moving the firm forward. “Richard has a very specific legacy,” says Yeon, 61,  who, like other senior designers, was given significant independence under the founder. “So every project we do embodies basic formal architectural principles. But we want to push the discourse and make a difference, designing at every scale, for any budget, for any kind of problem.”  The decision to reorganize the firm, says Ana Meier, springs from the conviction “that there is so much value and importance in the work that we want it to go on and continue for a long time” 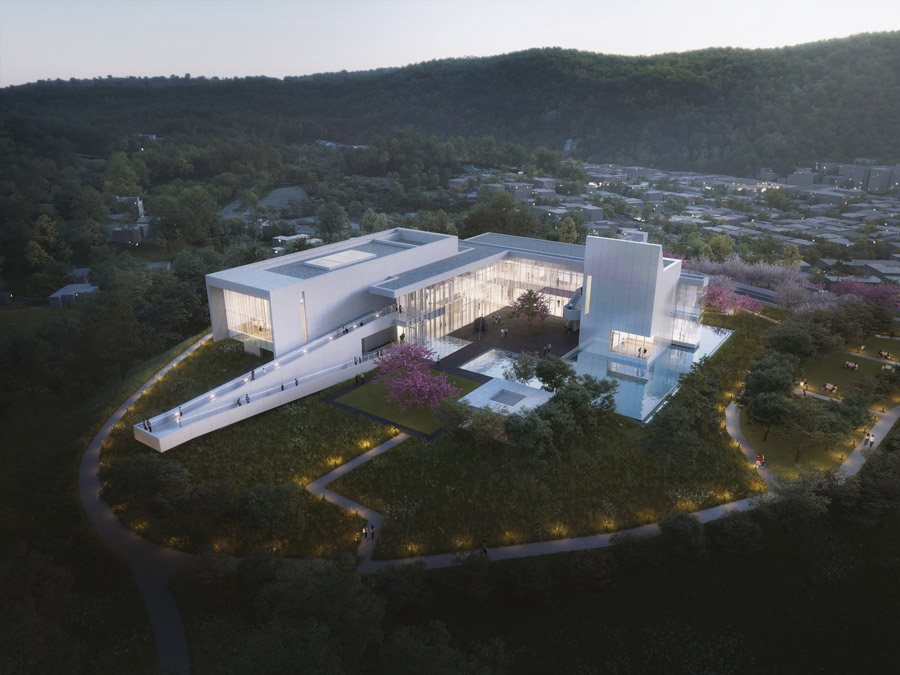 The Solol Museum in South Korea, devoted to works by modern Korean artists (2020-2022).

Yet the road to the current restructuring has been bumpy, and Meier seems to have found it difficult to let go of the reins. Though he took a six-month leave after the crisis of March 2018, when he returned that September, he told the Times he had “no plans to retire.” But a month later, the firm issued a statement that he was “stepping back.” Bernhard Karpf, an architect with a 31- year tenure at the firm, became the managing principal, while three senior architects--Vivian Lee, Reynolds Logan, and Yeon--were promoted to principal as well.

Then in the spring of 2019, the firm quietly brought in George Miller, 72, who had left the year before as managing partner of Pei Cobb Freed & Partners, after 44 years with the firm. Miller was first approached by Michael De Chiara, of the law firm Zetlin & De Chiara, who has been advising the Meier office. “I went to see Richard at his apartment,” Miller recalls. “We had a couple meetings before we even began to work out the details.” Within months, Karpf left to start his own practice, and subsequently, Lee departed to become executive director of the New York Studio of Woods Bagot, and Logan joined the North Carolina office of Perkins + Will as principal and design director. The Meier office now has about 30 in staff, including administrative employees, and is hiring, says Miller. 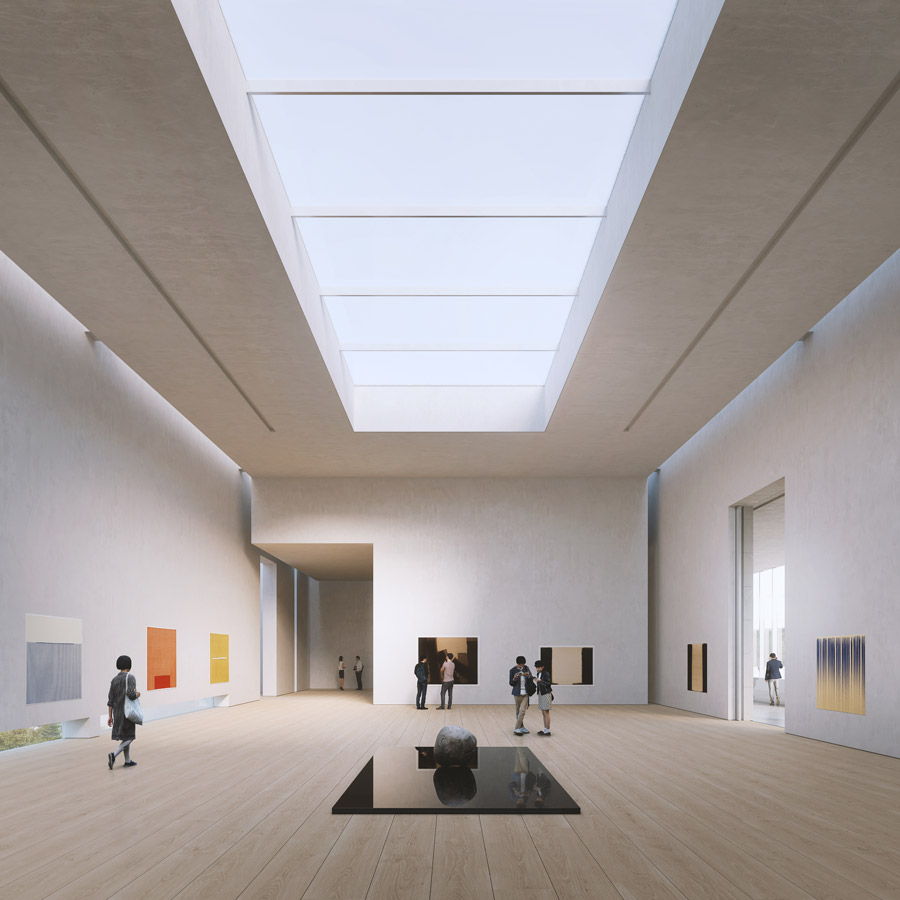 The Solol Museum in South Korea, devoted to works by modern Korean artists (2020-2022).

These days, according to his daughter, Richard Meier is focused on painting, at his home on the East End of Long Island. Yet, as during the various leadership changes over the last three years, he remains available to clients who ask for him. “A lot of clients are his friends, and they want to talk to him,” says Ana. However, as Miller explains, “Richard is not in the office and is not overseeing day-to-day operations.”

In the firm’s airy, white, loft-like space in Manhattan, Ana now occupies her father’s office, with its huge, colorful Frank Stella relief taking up the wall opposite the desk. A graduate of Harvard, who studied art and architectural history, she runs a lighting company and is particularly interested in the impact of light on people’s wellbeing. She has commissioned a study to look at the effects of daylight in four of her father’s projects, including the Smith House (1965-67) and the Getty Center (1984-97). That last project was one she saw evolve over many years as she was growing up: her father often  took her to the Getty site in L.A. in the early morning and late afternoon, and talked about the changing light. “It made a big impact on me,” she says. The study can inform the work of the future practice, she believes, as it seeks to perpetuate the essential ideas that Richard Meier brought to architecture.