Alison Killing may be the first architect to win a Pulitzer Prize. Two weeks ago, when the list of honorees was announced, Killing, a 41-year-old Rotterdam-based architect, was on it, thanks to work she did using satellite imagery to spot hundreds of camps in China’s Xinjiang region, many of them newly built, in which the Chinese government is believed to be detaining almost a million Muslims. The article that resulted, published in BuzzFeed News, has been praised not just for its revelations about China’s war on Uighurs, Kazakhs, and other minority groups but also for Killing’s investigative methods.

Born in Newcastle, England, Killing studied architecture at Cambridge and Oxford Brookes, then worked for the engineering firm Buro Happold and several architecture and urban design firms in London and Rotterdam. In 2010 she decided that she wanted to work for herself. She took part in a community design program called 72 Hour Urban Action and curated an exhibition about death and architecture. Then she created Migration Trail, the story of two European migrants told through data, and began seeing herself as a tech-based storyteller. At that point, she says, “If I had really wanted to be building, I would have been doing it.”

How did the China project come about?

In 2018, I attended a workshop run by an organization from Berlin called Tactical Tech, about conducting online investigations. There I met Megha Rajagopalan, a tech reporter for BuzzFeed News, who was the first journalist to visit one of the camps. Because she wasn’t being allowed back into China, she was interested in continuing to investigate from a distance. We had 10 days of conversation at the conference, and then we kept in touch, batting ideas back and forth. In mid-2018 it was believed there were about 1,200 camps, but fewer than 100 had been found. Our idea was to find all of the camps. 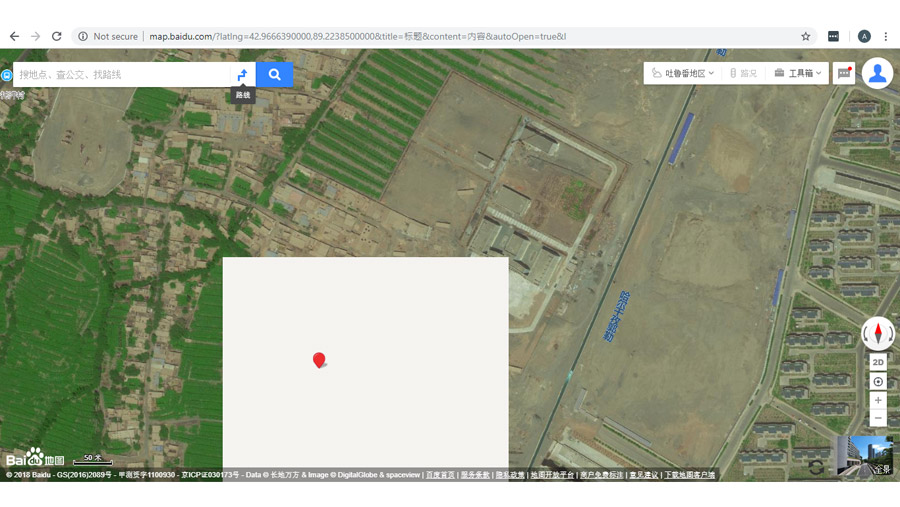 China's search engine Baidu blocks out a large industrial area in the city of Turpan, in the east of Xinjiang. Image © Baidu

How did you begin?

I knew that the Chinese search engine Baidu had a Street View equivalent called Total View in which it tried to hide industrial facilities. I figured if they’re censoring factories they're almost certainly censoring the camps. And they were: on Baidu’s equivalent of Google Earth, when I zoomed in on the location of a known camp a light gray tile would appear, masking the area. It looked like the map wasn’t really loading. But I knew what was going on, because of the work I had done with interactive maps on the migration project. We realized we had a technique that could be used to find all of the camps.

So their censorship was the very thing that enabled you to find what you were looking for?

Yes. Our next step was to make a list of all the censored locations in Xinjiang.

How many did you find?

It was a lot—everything from industrial parks to military bases and military training areas to solar panel arrays and wind farms, anything that has any kind of strategic value.

How did you winnow down the 5 million?

We knew the camps need certain things: workers to build them, roads to get people to them, water, electricity. Factoring in those things left us about 50,000 possible locations. I went through them systematically, about 10,000 a week, looking on Google Earth and other available satellite imagery for compounds that might be camps.

How did you know what to look for?

Until 2017 the camps were mostly former schools or hospitals. In the converted schools, the sports fields might be covered in blue-roofed industrial sheds. Instead of a playground there could be a barbed-wire passageway.

By 2018 we were able to see massive high-security camps being built, with guard towers and heavy perimeter walls. The biggest of this new generation of camps can hold 32,000 people.

What did you do with your list of locations?

We then started to corroborate them, with eyewitness accounts, media reports, and government tender documents. We worked in parallel. Megha would say she had an eyewitness who had been held in a camp in a certain town and I would try to find it. By the time we published last August we had confirmed 268 locations. Since then we’ve found almost 100 more.

How did the Chinese react to your article?

We went to the government for comment prior to publication. They called our reporting “a groundless lie.”

Do you refer to yourself as an architect or a journalist?

It depends on the forum. I continue to call myself an architect because I am licensed. And the reason I am able to do this work is that I have those skills.

When we were trying to narrow down the areas that the camps were likely to be in, the work I had done in urban planning was very useful. And I was able to identify the architectural characteristics of a prison because I was used to looking at the world from above and understanding how something two-dimensional will look in three dimensions.

What’s next for you?

We’re still working on this project. We think we have found close to the full network of camps. Now we’re looking at factories in the camps. Forced labor is widespread, and we’re hoping to investigate companies that are registered in those locations. We're at the very early stage.

What is the takeaway for architects?

I think one of the things that this project has shown is the way somebody with skills like mine can contribute to a journalistic project, and produce interesting investigative work that might not have happened otherwise.