Self-styled “vagabond” architect Vinu Daniel has won The Royal Academy’s £10,000 ($10,735) Dorfman Prize for emerging architecture. Chair of the international jury Farshid Moussavi said: “Usually when we talk about sustainability in architecture, we often end up with very old forms. What is really special about Vinu Daniel’s work is that he turns base materials into aspirational forms and spaces that we haven’t seen before.” 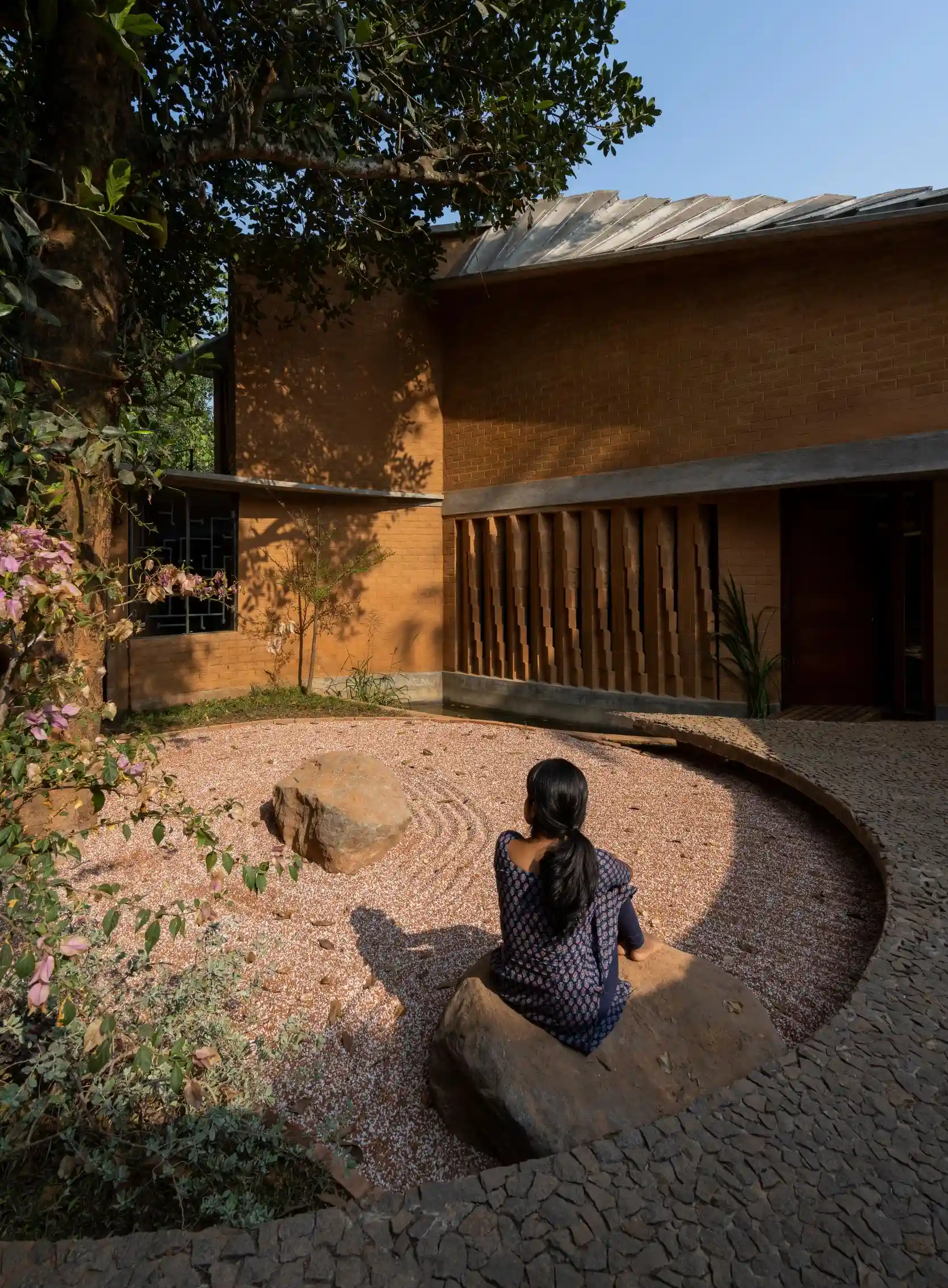 Daniel works predominantly in the southern Indian states of Kerala and Tamil Nadu with his itinerant practice Wallmakers, which has no fixed office. His architecture champions vernacular building techniques, particularly the use of earth, formed on site into fired bricks, and Compressed Stabilized Earth Blocks, as was the case with his project, the Jack Fruit Garden Residence, a single-family house (2021) in Vengola, India. Increasingly his work also incorporates freely-available waste materials, such as the car tires he used to create a small amphitheater at the Port Museum in Alappuzha, Kerala, in 2021.

Speaking from somewhere on the road between Coimbatore, in Tamil Nadu, where he is building a school, and Shoolagiri, where he’s building a whole community, Daniel dismisses the narrative that India has improved the relative wealth of its people through a program of growth.  “People have learned how to cover up problems and famine but we have not addressed our problems,” he says. “We have just learned to apply more makeup.”

Born in Dubai in 1982 into a middle-class Indian family, he completed his Bachelor of Architecture degree in 2005 from The College of Engineering in Trivandrum in Kerala, although he found the act of designing, rather than building, uninspiring. He studied further, with a more hands-on approach, at the Earth Institute for the United Nations Development Program in Auroville, southern India’s Arcosanti. Daniel took to this handmade utopia with alacrity, learning new techniques of building. "A fascinating part for me was that the aesthetics, the understanding of a worldwide aesthetic, changed a lot once I went to Auroville because it was an amalgamation of so many cultures,” he says.

Founded in the late 1960s under the teachings of a yoga-based sage, Sri Aurobindo, the building program looked to the vernacular tradition. In addition to the technical approach to construction, Daniel was brought face-to-face with the needs of his countrymen, as the town of Auroville was still trying to accommodate victims of a 2004 tsunami. Daniel himself, despite his background, experienced extreme poverty after the death of his father and was taken in by a guru who lived in the outer reaches of the town.

For several years, Daniel spent his time working as a nomadic builder, inspired not just by Auroville but also by the work of British-Indian architect Laurie Baker (1917-2007). By his own admission, Daniel was difficult to work with at that time, often restricted to just constructing compound walls, which inspired the cheerily self-deprecating name of his practice. A key early project was the Valsala Cottage (2009) he built for his uncle, which was featured in Rahul Mehrotra’s book Architecture in India (2011). Another big step was the rebuilding of the St. George Orthodox Church in Mattancherry (2016). The original 17th century building was the first Christian church in southern India, but it had suffered years of neglect. Using little of the original but its foundations, Daniel rebuilt it with a dome and a series of mudbrick Nubian arches along the nave, in a technique not dissimilar to that rediscovered by the Egyptian architect Hassan Fathy and used as well by Antoni Gaudí. The extraordinary dome and arches are the most overt example of his work’s simple spirituality. “I was born a Christian but I am an atheist, although I believe my God is Nature itself,” says Daniel.

Currently building an agricultural community called Sanctity Ferme in Shoolagiri, where the buildings are deliberately hidden in the landscape, he declares, “We as humans cannot continue life without minding the ecosystems in which we live. Can we return something of it after we build? Can we replace 80 percent? Can you replace 50 or 60 percent? We don't need to negate everything that was living there. They deserve to be cared for. After all, who is our client? Is it just the person owning the money?”

Though his work is technically ingenious, he is no ingenue. He has two patents in his name for two types of debris wall systems and a shuttered debris wall system, with his colleague Shobhita Jacob. His architecture is also profoundly expressive. Although the Ledge, a house in Peerumedu, is made from shuttered debris walls and casuarina poles, normally used in fencing, the building’s geometries are deconstructivist. The pole facade culminates in a point suspended above the ground, thrust out from the hill face. Daniel’s architecture has gone well beyond its origins in India’s strange, self-built utopia of Auroville and, as Moussavi says, “tests the limits of what you can do with architecture in apparently limited circumstances.”

The international jury for the Dorfman Award, chaired by Moussavi, included Farrokh Derakhshani, Director of the Aga Khan Award for Architecture; Hisham Matar, Pulitzer Prize-winning author; artist Cornelia Parker; Zoë Ryan, Director of the Institute of Contemporary Art, University of Pennsylvania and the architect Peter St John. The prize was established by the Royal Academy in 2018 to highlight new talent in architecture.