When the Olympic Games open in Tokyo on Friday, the seats will be empty in the new Olympic Stadium, built for 68,000 spectators. But in news reports, you may hear a feel-good story about how Japanese architect Kengo Kuma conceived the stadium’s design as a "living tree,” with landscaped terraces ringing a structure faced in woods harvested from all 47 of Japan’s prefectures.

Yet the backstory to this environmental narrative, you will recall, is more complex, and darker. The stadium’s original designers, Zaha Hadid Architects (ZHA), claimed the design of the base structure—the all-important bowl and its back-up functional spaces—was lifted without permission from their competition-winning scheme, after the London-based firm was unceremoniously dismissed in 2015.

In 2012, out of the 45 proposals in an invited competition, Zaha Hadid won the commission for the new stadium, proposing a lithe, athletic building: concrete keels, the structure’s signature, arched over the playing field to support a retractable roof. The Japan Sport Council used that design in its bid to secure the 2020 Olympics.

But after Hadid spent two years perfecting it as a site-specific urban organism that could handle armies of spectators, a group of prominent Japanese architects started objecting. In an assault on the legitimacy of an international competition—whose jury was headed by one of Japan’s Pritzker laureates, Tadao Ando—those architects claimed, belatedly, that the site was sensitive because of its proximity to the hallowed Meiji Shrine, and that a smaller design should be built. The implication was that only a Japanese architect would know how to embody the necessary spirit of the place. They did not mention that the Olympic grounds are isolated within an enceinte of major roads, and that a busy freeway, rail lines and a half-kilometer-wide swath of dense Tokyo urban fabric separate the sports park from another park in which the Meijii Shrine is located. As it was, the new stadium would replace the existing 50,000-seat National Stadium on the site. 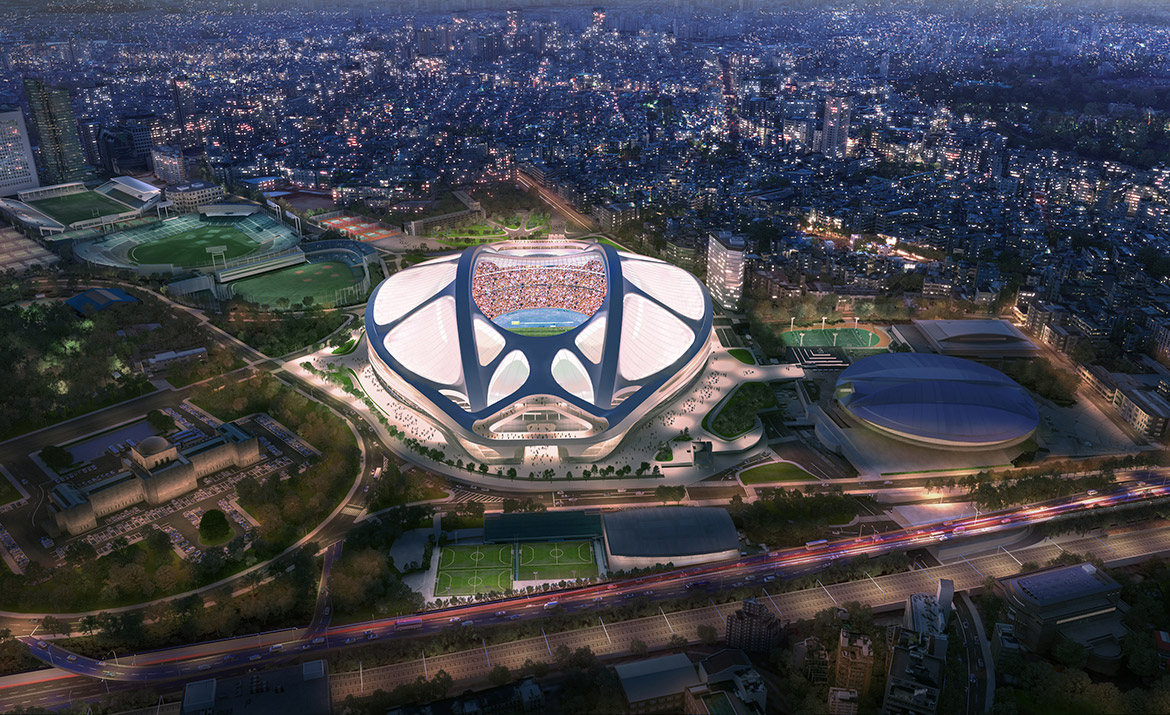 Rendering of Hadid's unrealized stadium at night, with its signature concrete keels.

Harvard-trained Fumihiko Maki maintained the competition had been conducted to favor famous, and therefore, foreign architects—even though Japan’s most celebrated architects joined the famous architect in protest. Hadid called it hypocrisy, since some of the objecting architects had already accepted the brief by competing. Maki seemed to volunteer to take over, if asked: the petition he spearheaded sounded like a job application.

The Japanese architects’ attack ballooned into a national issue when then-Prime Minister Shinzo Abe, deflecting attention from his low popularity ratings, renounced the design, stating that building a new stadium would have “to start over from zero.” The country’s largest newspaper headlined a story about a price tag reaching $2.1 billion, almost twice the original estimate, and other newspapers piled on about the costs of a building that had never been open to competitive bidding. The storm was perfect.

The issue pitted most of Japan’s Pritzker laureates (Maki, Arata Isozaki, Toyo Ito) against the British Pritzkers (Hadid, Norman Foster and Richard Rogers, who had been on the original jury), with two other Japanese Pritzkers, Ando and Shigeru Ban, taking the British side. In a profession traditionally characterized by fair play and “gentlemanly” conduct, it was an unprecedented breach. 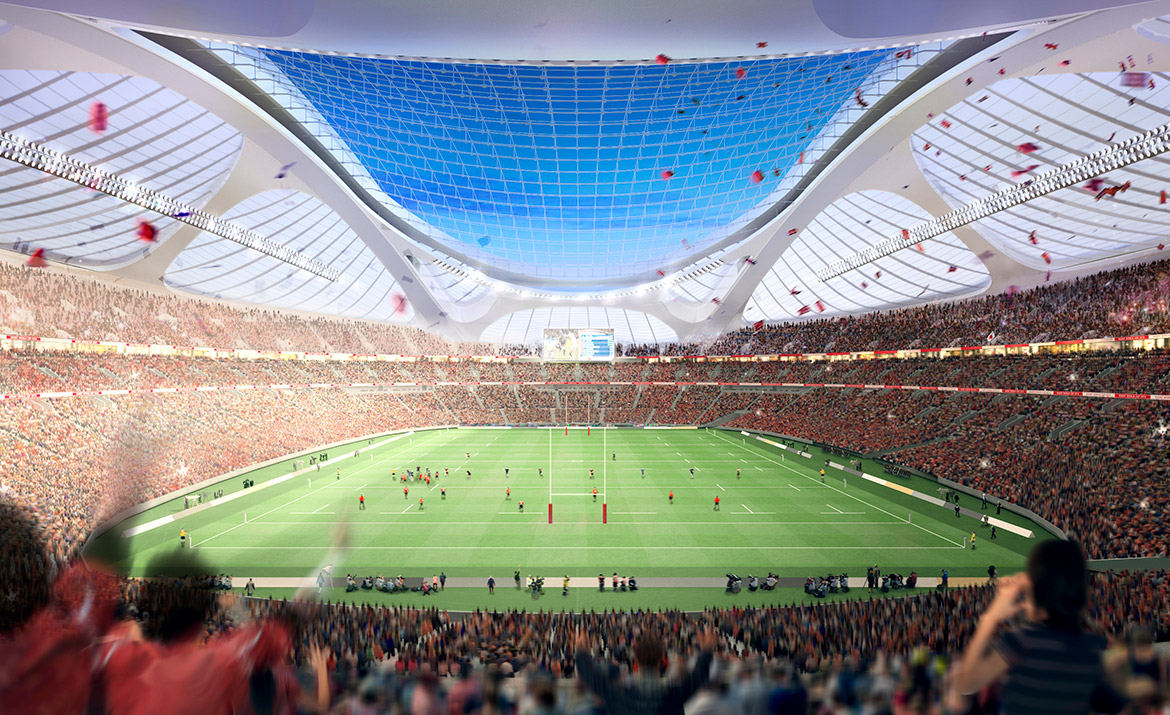 Rendering of the inside of the stadium during the day.

The Japan Sport Council announced a new competition in 2015, devising a tactical maneuver that effectively shut out foreigners by requiring that architects partner with qualified local contractors to enter—and those contractors with the necessary qualifications were already committed to Kuma and Ito. Ban complained that the competition would not be fair and open, with only two teams now qualifying. Two of Hadid’s partners on her design, Nikken Sekkei and the Taisei Corporation, a construction company, had BIM files for 4,000 of ZHA’s drawings, ready for construction, with highly intricate technical details for the stadium’s bowl. They migrated to Kuma’s team.

Kuma went into the new two-month competition with a perfected base design and simply had to wrap Hadid’s bowl with another form—though he denies this.

The new Kuma design was chosen in December 2015 (and completed in late November 2019, just as COVID was taking hold in China). Given the objections to Hadid’s bravura design, which leapt over the site as if in a track-and-field competition, Kuma’s design was modest (as was Ito’s), seemingly far short of Olympian aspiration. As Ando had originally commented on Hadid’s winning scheme: "The entry's dynamic and futuristic design embodies the messages Japan would like to convey to the rest of the world."

Kuma’s oval design, with its flat roof, wood cladding, and sandwiched levels, represented a retreat from architectural dynamism into comfort nationalism, with a green halo. (Green architecture sheds criticism more easily.) Some people in Japan immediately dubbed the design the “Big Mac,” with tufts of greenery stuck out between the stacked perimeter walkways like lettuce.

Kuma reportedly contended that the Japanese would appreciate his scheme’s carefully crafted detail, yet that defense failed to acknowledge that most Olympic spectators will be watching on TV screens that can better capture a grand architectural gesture. During a press conference, he lamely added in further defense of his winning design that the language barrier made it “perhaps difficult for architects from other countries to work in Japan.”

When Kuma’s plans were published, Hadid and her partner Patrik Schumacher publicly called out the similarities between the “bowl” beneath Kuma’s superstructure and their own. Hadid’s complaint was not about her shell, the most visible design element, in which she had abstracted a “calligraphy” of lines from the curving roads of the surrounding cityscape, and created pathways that would become public promenades over and through the building, as in a park. Her accusation was about the essential underpinnings: the seating, sightlines, access points, infrastructure and placement of all those sushi and soba concessions. (Responding to cost issues, she downsized the original design while keeping the stadium’s contoured, saddle-like, low-profile silhouette.)

To Hadid’s call of copyright infringement, Kuma responded that any similarities in the bowl were the logical consequence of optimizing sightlines and that any good architect would arrive at the same geometric conclusions. In response, Hadid stated, “To claim that the major similarities and many identical instances in the design…and thousands of fine details are ‘automatic’ or due to chance is not credible.” 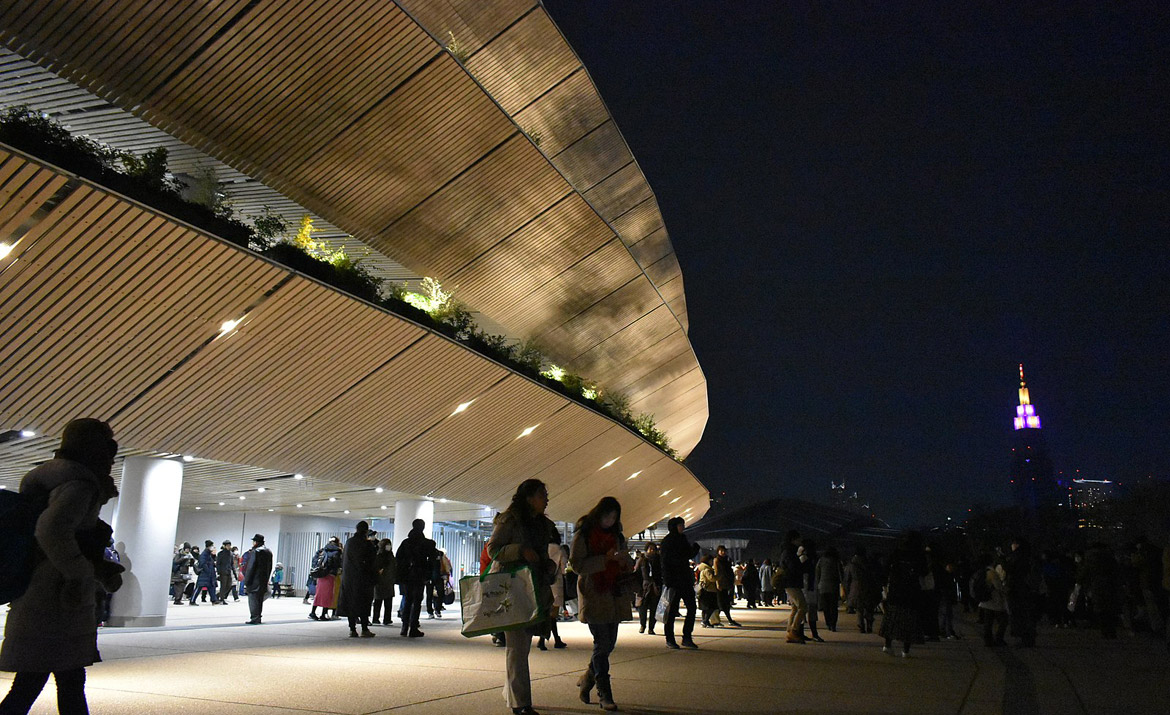 Even Kuma’s losing rival, Ito, agreed with Hadid, according to the New York Times, saying Kuma’s design “is almost entirely based on Zaha Hadid's plan. Its appearance is different, but if you look under the surface, there are details that seem almost unchanged.”

A comparison of Kuma’s bowl overlaid atop Hadid’s (when the plans were still accessible on the Internet) confirmed that the many similarities in the layout, including dimensions, appeared more than coincidental. Kuma’s sightlines to focal points on the playing field were engineered to be within a fraction of an inch of ZHA’s. The Arup engineers on Hadid’s team used advanced software to optimize the focus for all seats, adjusting the optimal spot within the huge stadium by 35.43 inches. Kuma performed the same exercise, coming up with just .39 inches difference.

Hadid contemplated suing the Sport Council and Taisei Corporation, the contractors, for copyright infringement, and sent the Council a report detailing the many significant similarities between the structure, layout and dimensions of her design and Kuma’s, a document that she said, with legal overtones, should be the basis of further discussions about “the use of valuable design work that is currently the copyright of ZHA and the original design team.

But when Hadid stated her position, the government threatened to withhold final payments, a loss that would have been devastating to the firm. Unless she signed a release of the copyright to allow the Council to use the work freely, no additional payments would be made. The Sport Council, presumably a champion of fair play, had not sustained standards of honor. In addition, the Council had to avoid a lawsuit that could have halted construction and plunged the Tokyo Olympics into a PR nightmare.

In her first interview after being fired, in the same New York Times article, Hadid said that the Council’s demand of the copyright release proved her point. “The attempt to force us to hand over our copyright, something that’s never happened on any of our designs, was an acknowledgment that they need to use... the original design to proceed.”

Never one to back down from a dispute, Hadid wanted to carry on fighting but was advised against it, even by Norman Foster, who took her side.

As reported by Dezeen, the Sport Council insisted that ZHA desist from commenting further on the Kuma project and making any detrimental or derogatory remarks.

A project that was originally conceived as a symbol of Japan’s resilience and openness after the 2011 tsunami ultimately transformed into one that seemed to express insularity and chauvinism. Hadid’s design, which had been the instrument of an expansive, global vision of Japan became a victim of a self-protective architectural guild.

The events were especially regressive for a country that had produced spectacular structures for the 1964 Olympics by Japanese master Kenzo Tange, whose striking originality in his stadium and other venues, captured on TV screens around the world, announced Japan’s post-war debut as a player on the international cultural scene.

But tomorrow and beyond, the media will be beaming a graceless, heavy-handed but politically correct “green” structure, the greenery yet to grow between the multiple layers of sandwich sections. What would have been the crowning achievement for Hadid—and for the arrival of a female, Arab architect in the narrow corridors of Olympic architecture—turned into a defeat for the architect and arguably for Japan. “I shall no longer be eating sushi,” she said. She died six months later, in March 2016.

Perhaps Hadid’s ghost has returned, waving a wand rather than the Olympic torch over an empty stadium in Tokyo, with only athletes on the playing field. The carefully-calibrated sight-lines won’t matter.