It was all the fault of the glass flooring. When Paris department store La Samaritaine was first built, at the turn of the 20th century, electric lighting was in its infancy: to increase illumination, every level, from the atrium’s summit to the three-floor basement, was paved with translucent Saint-Gobain glass block—1 million square feet of it—set into metal T joints. Covered up and forgotten in later decades, it would prove the building’s undoing. In 2005, the authorities deemed the flooring a safety hazard—the T joints, they said, would buckle in a fire—and closed the store overnight. In the aftermath of the debacle, La Samaritaine’s owner, luxury giant LVMH, drew up an $890 million redevelopment plan. Where once the Samar’, as it was affectionately known, had sold everything imaginable to anyone who walked through the door, it would now cater exclusively to wealthy tourists: 215,278 square feet of shopping mall peddling high-end brands—a 26-room,46-suite five-star hotel—as well as 161,459 square feet of commercial office space. In return for rubberstamping this giant gentrification job, the City demanded, and got, 96 social-sector apartments and a daycare center. 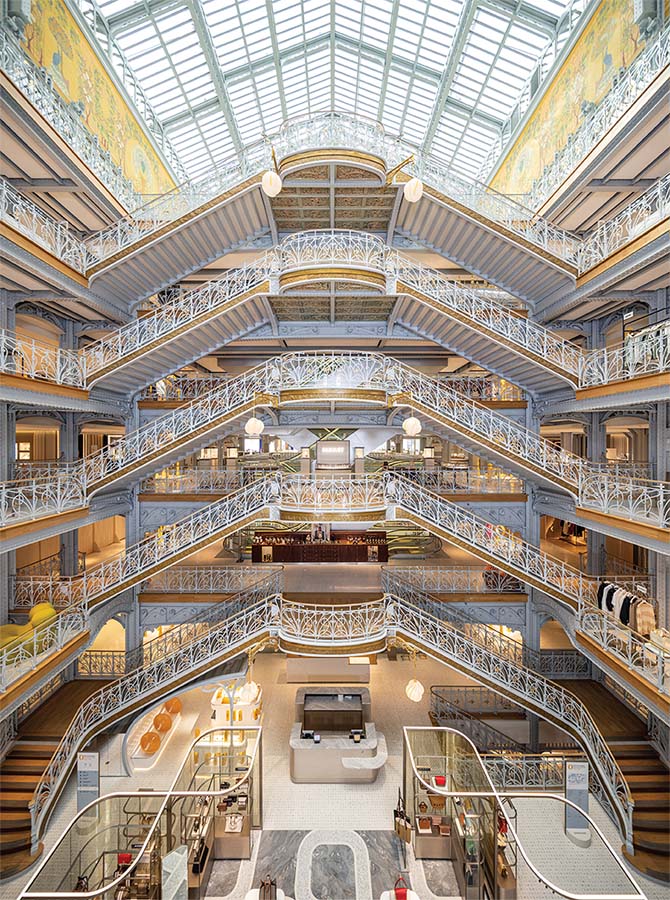 The 2010 architectural competition, won by Japanese firm SANAA, concerned two buildings: the iconic Magasin no. 2 (built in three phases: by Frantz Jourdain in 1891–1910 and 1906–10, and by Jourdain with Henri Sauvage in 1926–28), which occupies a huge city block between the Seine and the rue Baillet; and the smaller Magasin no. 4, which occupies the block between the rue Baillet and the rue de Rivoli, one of Paris’s principal shopping streets. While Magasin no. 2, which contains Jourdain’s celebrated Art Nouveau atrium, was land marked, Magasin no. 4—a hodgepodge of 19th-century buildings hastily knocked together in 1932–34—was not. SANAA’s first, and most controversial, decision was to demolish Magasin no. 4, with its many awkward changes of level, and build anew. Since it was only natural that five-star guests should enjoy views of the Seine, the end of Magasin no. 2 overlooking the river (the Jourdain/Sauvage part) has become the hotel (opening this fall, it was renovated by Édouard François, with interiors by Peter Marino); the grand atrium part (1906–10) has been fully restored for retail; while the rue Baillet end (1891–1910) accommodates retail, offices, social housing, and daycare. The new Rivoli building contains both retail and offices, while on the same block, a side-street row of 17th-century houses, whose demolition the City refused, has been converted into more social apartments. 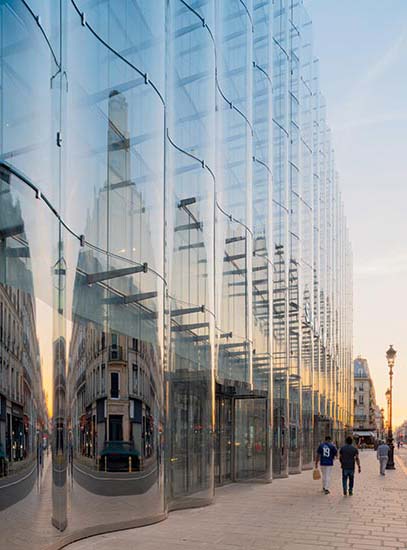 In the spirit of the historic store, SANAA chose steel and glass for their new Rivoli building and sought to bring daylight into every part of the complex, both new and old, organizing it around three giant light wells—one in their new building, another that they have carved out of the rue Baillet end of Magasin no. 2 (100,000 square feet were lost in the conversion), while the third and final is Jourdain’s atrium. Where the retail parts of the complex were concerned, the client was LVMH subsidiary DFS Group, formerly Duty Free Shoppers, which is present in airports the world over. 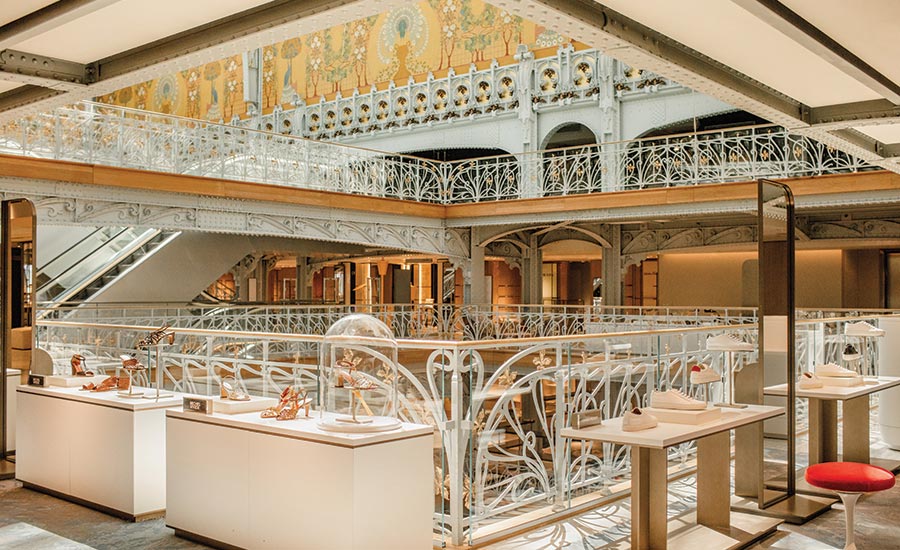 Most customers will enter from the new rue de Rivoli building, where, by demolishing Magasin no. 4, SANAA and LVMH engineered themselves the chance to write an entirely contemporary chapter in the storied saga of La Samaritaine. But while, in 1910, open floor plates and glass curtain walls were the acme of radicality, a century later they are the epitome of banality, especially in an era that refuses the decorative splashes so dear to our great-grandparents. SANAA’s renderings promised a milky, diaphanous, rippling facade, like draped silvery gauze, that would allow tantalizing views in (detractors nicknamed it “the shower curtain”); what we got is a double elevation, with an orthogonal, waterproof, heavily fritted inner layer of glass, over which is placed an entirely ornamental and miserably stiff corrugated outer layer, with display windows awkwardly inserted at street level. On rare occasions, when conditions are right, the facade lights up with reflections, but most of the time it is glassily dull, like a dead-fish eye (James Carpenter got far closer to the spirit of SANAA’s renderings at the new Nordstrom in New York). 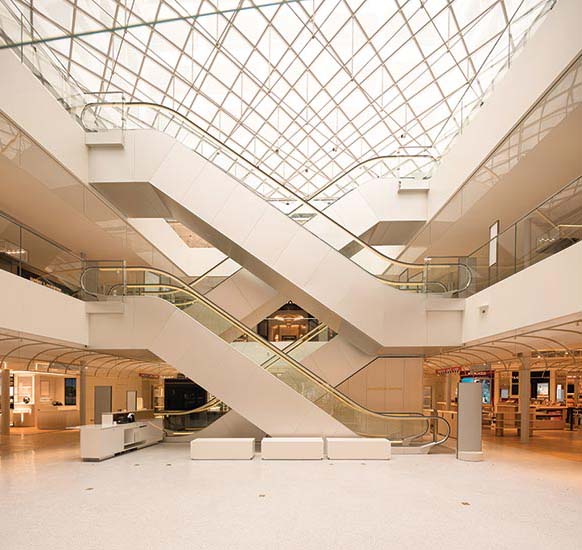 A glass-topped bank of escalators rises from the basement level of the transformed Magasin no. 2. Photo © Wearecontents

Things get worse inside. Low-ceilinged and lackluster, the retail floors of the Rivoli building (the basement, ground, and second levels, since “shoppers won’t climb any higher,” according to DFS) are so generic and joyless you might be in any airport anywhere in the world. To link its new building to Magasin no. 2, SANAA immediately forces visitors down escalators into the basement, which it has opened up to the sky, thanks to a glass-walled, irregular, cylindrical courtyard structure—a nicely realized piece of complex geometry that gives unfortunate views onto dreary gray inner facades. From there, a subterranean link takes you under the rue Baillet to the restructured part of Magasin no. 2, where a more conventional skylight looks up onto another set of dull new courtyard elevations, after which the promenade architecturale continues into the 1906–10 part of the building, where you climb, finally, into Jourdain’s splendid atrium. 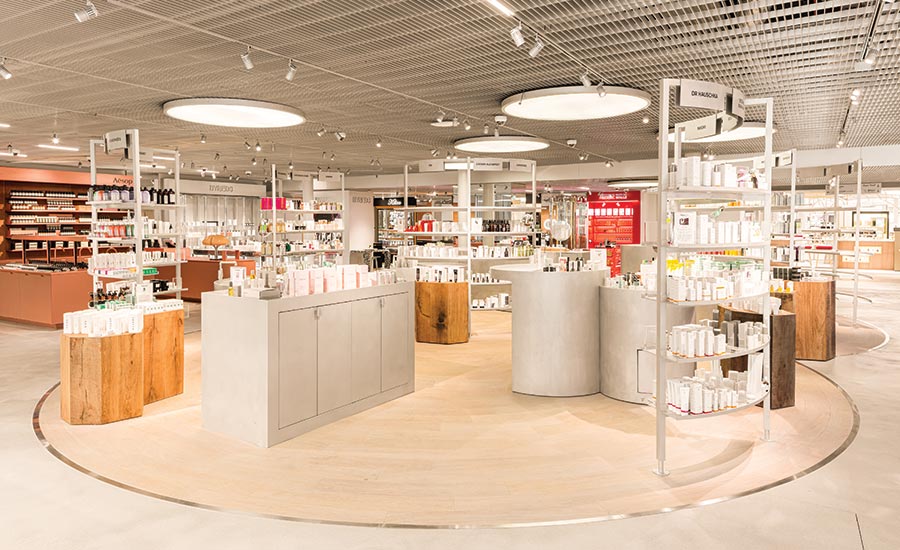 Though there was no way of modifying or replicating the Saint-Gobain glass floors to comply with safety regulations, the restoration of this Art Nouveau glory, and of the historic street facades, is the one triumph in this otherwise sorry, soulless, cynical story. Heritage specialist Jean-François Lagneau has seen to it that wrought-iron balustrades have been imperceptibly stretched to regulation height, that ceramics and other decorative elements hidden over the years have been uncovered and restored, and that the original color scheme and gilding has been reinstated. He has even attempted an evocation of the Saint-Gobain glass block on the top floor of the atrium beneath the roof, which has regained its lost glazing bars and gained in thermal comfort, thanks to state-of-the-art electrochromic glass in the skylights. But if you’re hoping to access the famous panoramic restaurant terrace from up here, forget it: annexed by the hotel, it is now reserved for guests and private functions. Them that’s got shall get, them that’s not shall lose. 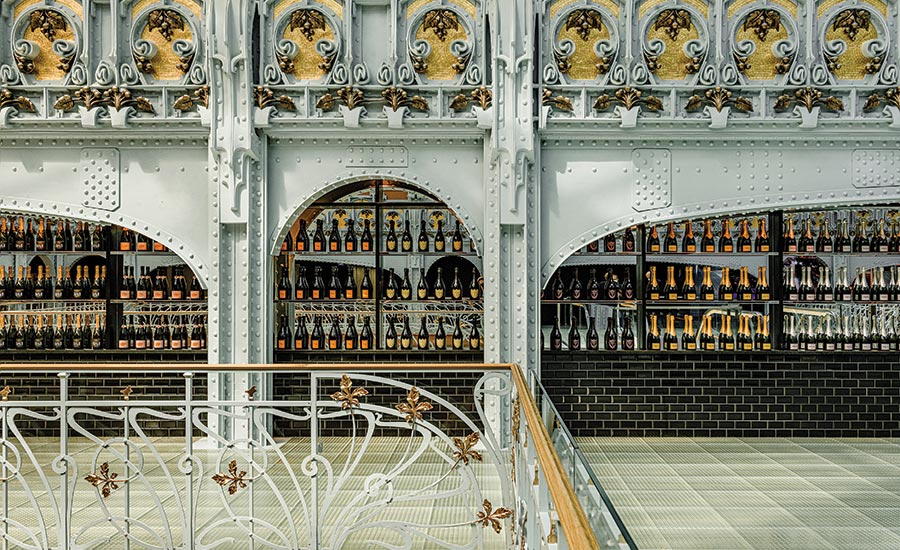 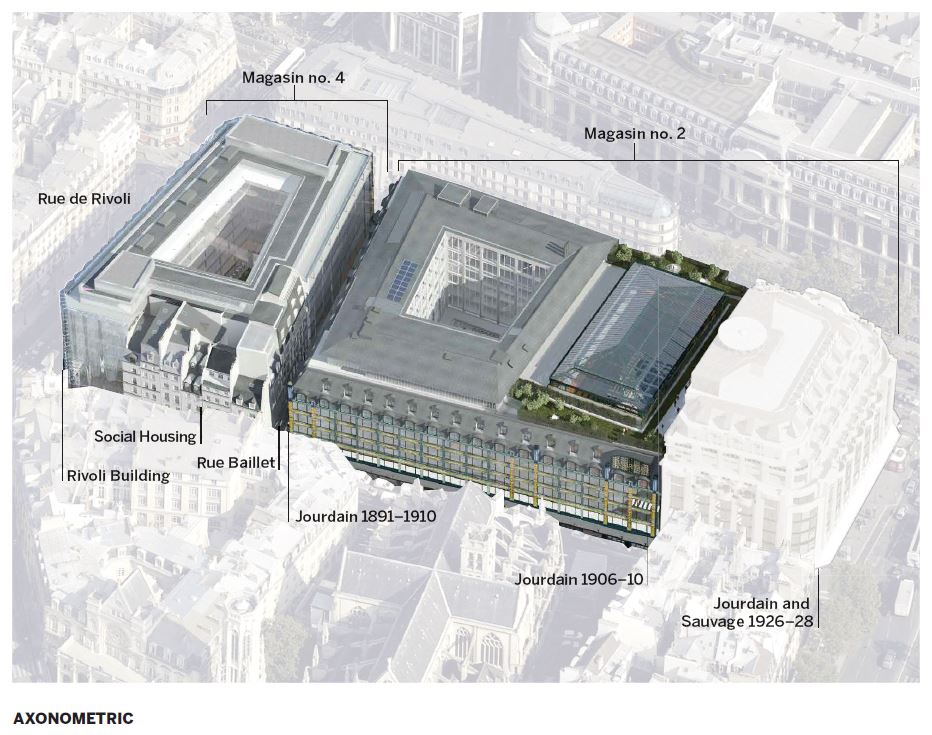 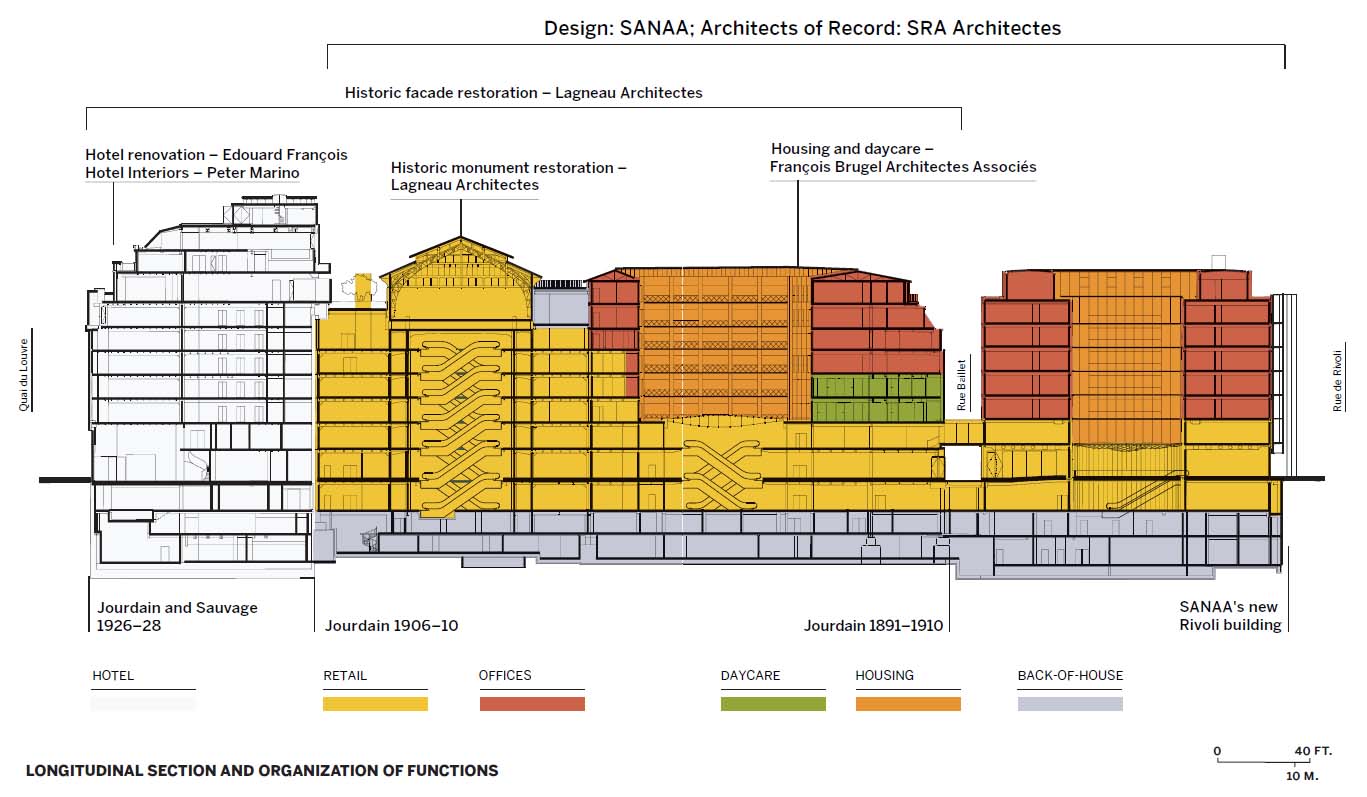