“We tend to innovate on our facades,” Joshua Ramus of REX says about his New York–based firm’s portfolio, which now includes a 450,000-square-foot office building in Washington, D.C. It helped that, until recently, REX shared a studio with facade consultant Front, a collaborator on nearly every major project the architecture firm has undertaken. Two projects, Vakko Fashion and Power Media Center in Istanbul and Five Manhattan West in New York’s Hudson Yards, involved putting a fresh face on old structures: the former incorporated large panels of curving slumped glass and the latter a pleated glass curtain wall. By virtue of its typology—requiring flexible raw space—and its corner site, with two prominent street frontages, the 12-story office building in the nation’s capital, despite being new construction, again focuses on the building’s skin. With an ethereal all-glass facade comprising 978 identically fluted panels along the entirety of its north and west sides, the rectangular 2050 M Street sits like a jewel in the city’s Golden Triangle business district, between Dupont Circle and the White House. 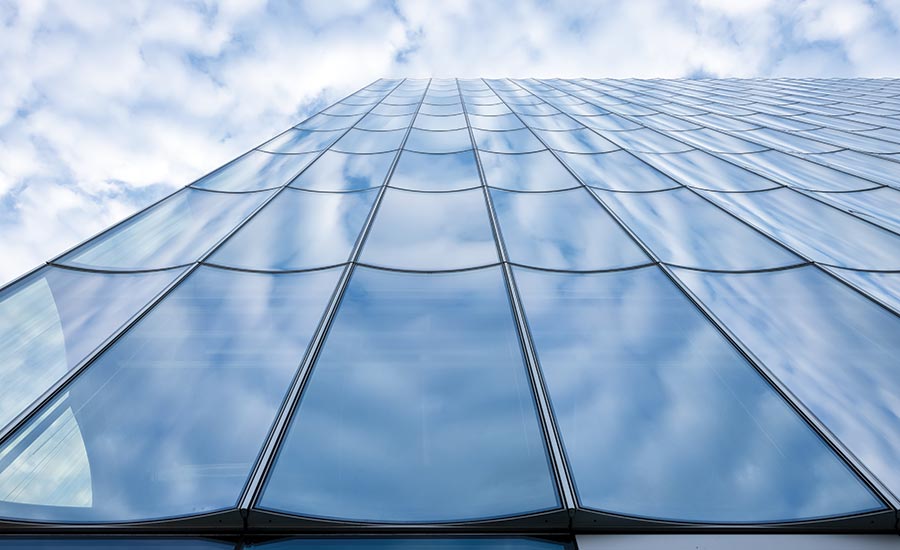 According to Ramus, the facade design—its modulation was inspired in part by the high-relief exteriors of the building’s Neoclassical and Brutalist D.C. neighbors—came about almost immediately after his being approached by Tishman Speyer, the building’s developer, in 2015. Tishman Speyer wanted premium office space that, unlike many of those neighbors, would offer tenants as much daylight and transparency as possible—but, as a spec building, keep costs down. The mullionless glass curtain wall of concave panels that Ramus proposed would have been prohibitively expensive if not for an unusual plan to procure the glass, conceived with Marc Simmons, a principal of Front, and presented to Tishman Speyer with the design. (Herzog & de Meuron’s Conrad hotel, built at the same time just a mile away—and of similar height, as limited by D.C. zoning—was meant to feature floor-to-ceiling convex glass panels from top to bottom, but that was value-engineered to just a band of curved glass at street level.) 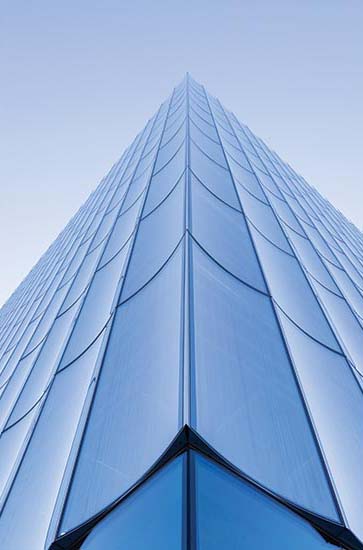 Tishman Speyer was willing to try something untested. “We committed to the glass before we had a contractor, and then we assigned the glass to the contractor,” says the developer’s managing director, Rustom Cowasjee, calling the non-traditional procurement process the designers proposed enlightening, and ultimately successful. “We’ve prepurchased large, complicated pieces of equipment in the past, particularly mechanical, but never before had we done that for glass.”

Typically, final design is assigned to the facade contractor, who is brought on much earlier in the design process. “As a commercial building, you give up competitive leverage if you do that,” says Simmons. Instead, REX and Front, with associate architect Kendall/Heaton, did a full analysis of the glass panel, then asked several international companies to give an estimate to produce the glass. Five fabricators were shortlisted and paid to make prototypes of the actual 11-foot-3-inch-tall by 5-foot-wide fluted panels. Tishman Speyer funded team members to go around the world to review the prototypes’ quality. “The price range was more than two to one, which was just crazy,” recalls Simmons. “If you worked with only one or two facade contractors, you could be paying twice as much.” They selected North Glass in China. 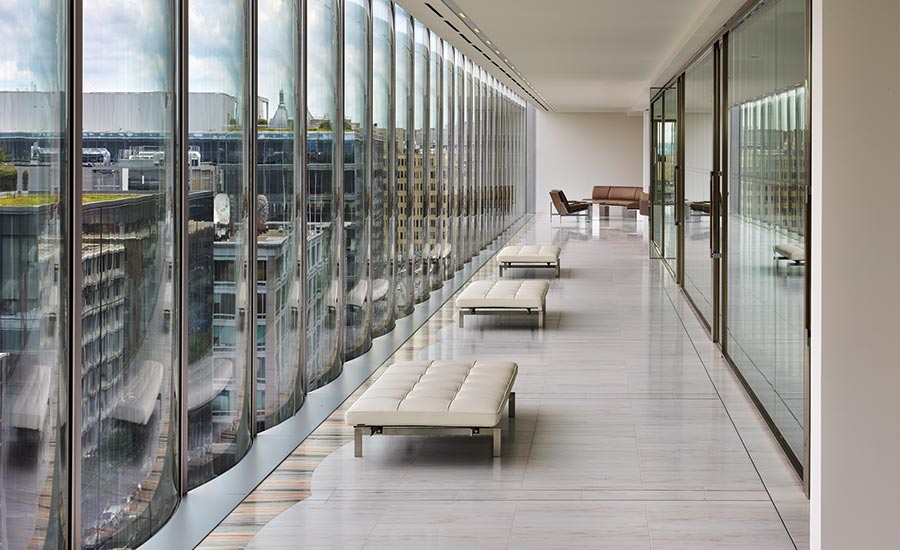 Another cost-cutting measure came with the use of a bending tempering furnace (BTF)—which heats and curves flat glass like a sushi rolling mat—rather than using molds, as REX and Front had done at Vakko. “BTF’s have been around for at least 20 years,” explains Simmons, “but have been increasing in scale and precision so that the optical quality and geometrical repetition is very good.” From the exterior, the overall effect of the building’s finished facade—constructed with an easy-to-install unitized system—is that of a sparkling gem reflecting its surroundings with crystalline precision. From the interior, there is extreme openness to the outside without distortion, but with an added dimension that elevates the view from that of the ordinary floor-to-ceiling flat glass we’ve all become accustomed to. 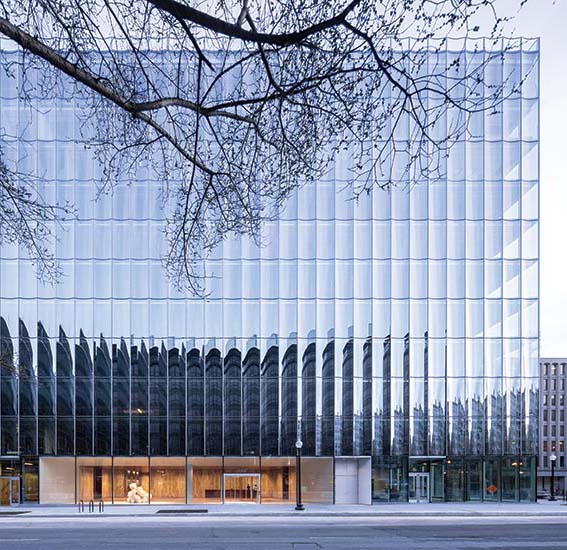 Perimeter columns are set 12½ feet away from the curtain wall to further enhance that feeling of openness. At the northwest corner, where the two prominent walls of glass meet, the thin (8-inch) floor slabs, clearly visible through the glass, appear like floating sheets of paper rather than stacks of concrete. Despite being located on a corner, the building does not have party walls; the south and east facades feature a combination of the fluted glass panels and fenestrated walls. The conventional plan puts the service core right at the center within the fully glazed perimeter. The curtain wall’s insulated glass has two high-performance low-E coatings to lessen solar-heat gain. Because the most exposed wall of glass faces north, it was advantageous in reducing energy consumption, too. Crowning the assembly is a cornice of 156 shorter but similarly fluted panels (4 feet 6 inches tall by 5 feet wide) that serve as a railing for the penthouse’s common roof garden.

A small portion of the building was finished in 2018 to allow CBS TV studios, which occupied the site’s previous structure, to move in early. Much of the remaining office space, substantially completed early this year, has since been leased to law firms, which have also taken over parts of the REX-designed lobby, clad in rich wood and graphic marble as a counterpoint to the crystalline glass. 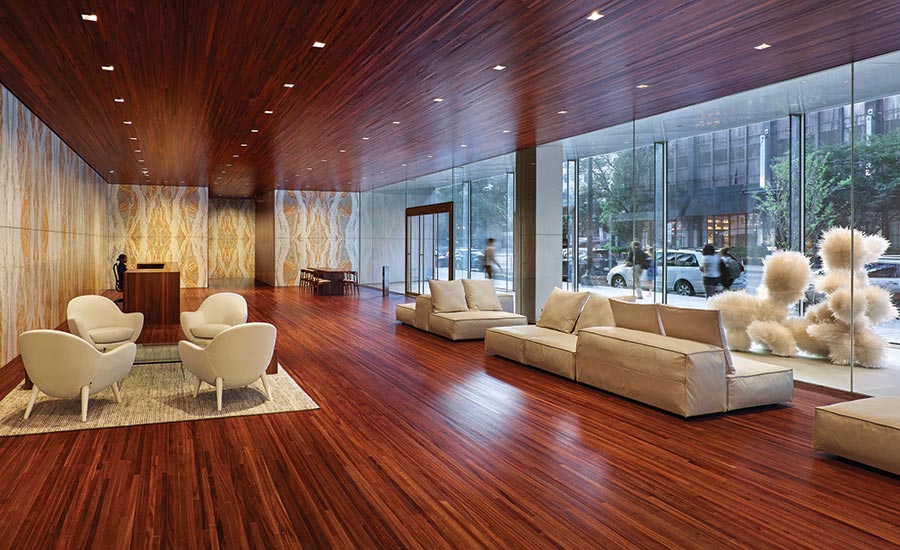 Though Tishman Speyer won’t divulge the final cost of the building, or the facade—“We had a budget, and we were within it using this procurement process,” Cowasjee maintains—Ramus says the high-end, bespoke product his team produced was only slightly more expensive than a commodity facade: “This is a spec office building; they weren’t going to do a facade that was 30 percent more expensive than a conventional system. It just wouldn’t pencil.” By taking a calculated risk, however, they ended up with architecture that fits right into its context but is a world apart. 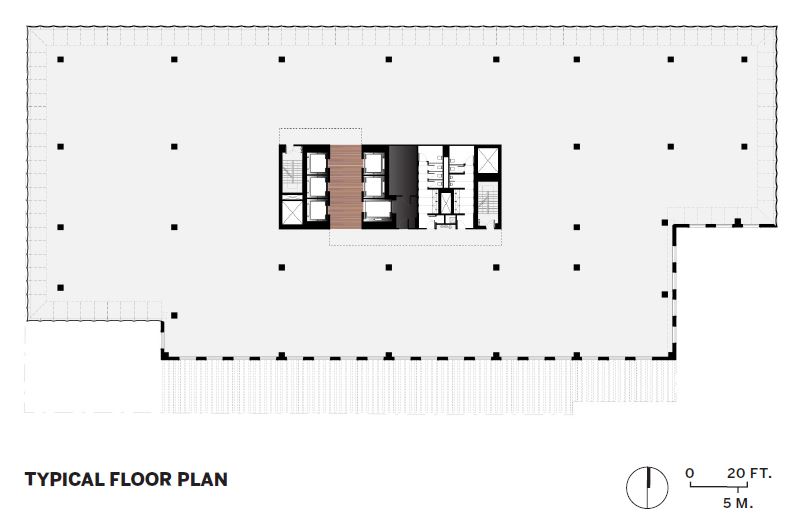 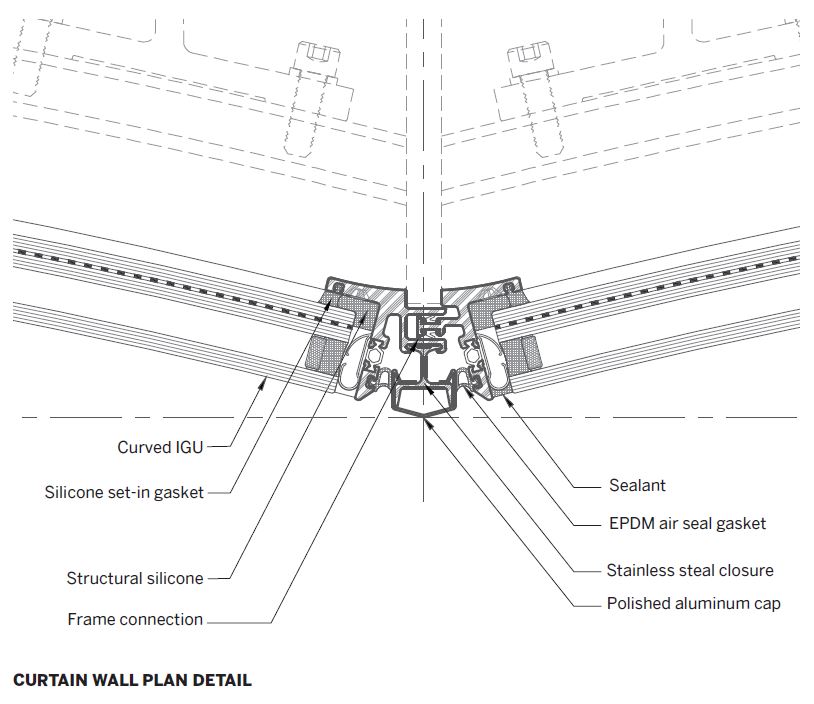 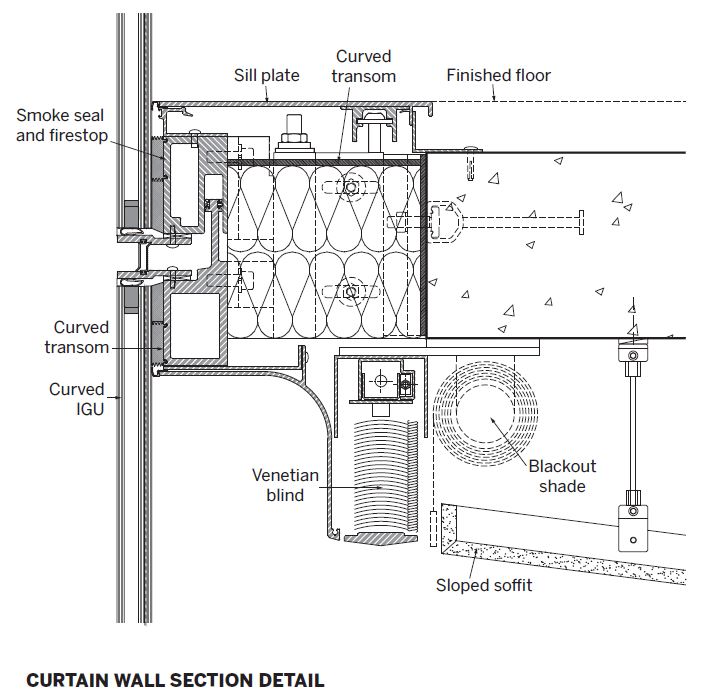