Perhaps the most astonishing thing about Adelaide’s proposed Aboriginal Arts and Cultures Centre (AACC), by Diller Scofidio + Renfro and Woods Bagot, is that such an institution doesn’t already exist in Australia. Though two other comparable projects have been proposed, in the Northern Territory and Western Australia respectively, both are less advanced than the AACC, which is expected to start construction later this year and open in 2025. SANAA’s Sydney Modern addition to the Art Gallery of New South Wales, unveiled in 2020, will also include an Aboriginal and Torres Strait Islander gallery but not a stand-alone center.

The absence of such a key institution no doubt reflects Australia’s troubled relationship with its colonial past, as well as the widespread belief that Aboriginal cultures are largely immaterial and therefore difficult to exhibit and the fact that many critical objects were stolen in the early days of the colony and now reside in Paris and elsewhere. Orthodox approaches to Aboriginal art tend (perhaps for the same reasons and notwithstanding distinctly art-world price tags) to the semi-anthropological, emphasizing bark, craft, and ochre. This new project, if approved, stands to remedy all that, becoming a critical pivot in Australia’s cultural history. In 2018, DS+R and Woods Bagot were announced the winners of the design competition for Adelaide's new facility, but the proposal has changed dramatically since then, from a silvery, rigged volume to something more organic, and now with focus on Aboriginal cultures instead of art in general. 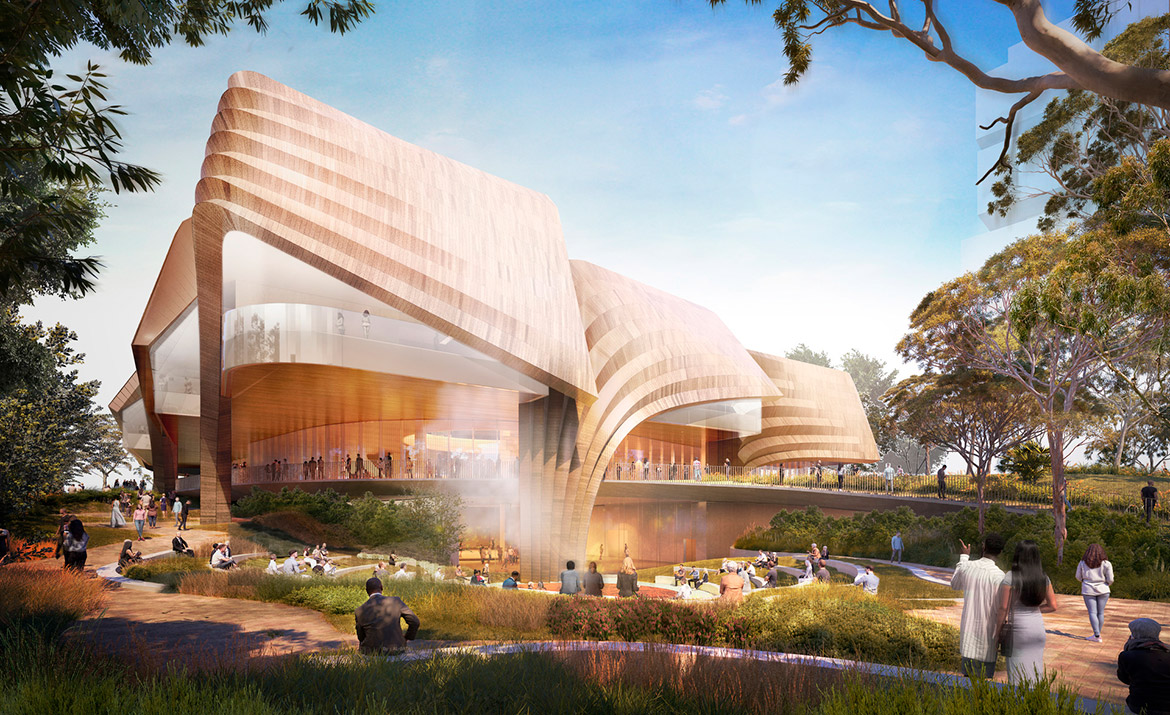 Adelaide is the capital of the state of South Australia and one of the country’s two planned cities (the other is the far more thoroughly designed national capital, Canberra). A pet project of the state’s premier or governor, this new Cultures Centre – its proponents are careful not to call it a museum or gallery – will take pride of place on a dignified boulevard called North Terrace, nestled between the Botanic Gardens and a mixed-use site for tech and culture where the city’s Royal Adelaide Hospital once stood.

This, in itself, is nicely symbolic. Australian Aboriginal cultures (there are over 250 language groups including 800 dialects) are the world’s oldest continuous, living cultures, stretching back at least 65,000 years. The AACC is intended to show this, but also the cultures’ contemporary and evolving nature. A similar duality drives Adelaide’s fabulous long-standing annual festival of Aboriginal and Torres Strait arts, Tarnanthi.

There is much ground to be made up here. In 2020, it is estimated some 864,200 Australians are identified as Aboriginal or Torres Strait Islander. This is scarcely more than the estimated 750,000 who are thought may have inhabited the continent when British settlers arrived in 1788. Now, though, the figure represents little more than 3% of the population. This low figure reflects the physical massacres and active attempts at cultural erasure, including taking children from their parents and bringing them up “white”, that characterized the first 150 years of colonization. Aboriginal people only received the vote in 1962, as in the film “Rabbit Proof Fence” and Kate Grenville’s excellent book, “The Secret River.”

Now, thankfully, things have changed. With regard to the AACC, architecture and programming have, naturally, been largely guided by Indigenous people themselves during an 18-month design process that involved weekly “deep listening” sessions with different people and groups. The project’s Client and Stakeholder leader, Adelaide-based Rosina Di Maria, describes this process as less design than “translation.”

Di Maria is an interior designer at Woods Bagot, not an architect. Her appointment as team leader is unusual on such a significant project but came about through her long-standing engagement with Indigenous culture. (Di Maria is a board member of two organizations that actively promote Aboriginal artists, The Jam Factory and Carclew. She also regards learning to design with First Nations peoples as a personal “foundational belief” that speaks to the Australia we need to create.) Perhaps her interior design background also inclines her to a natural empathy with the Aboriginal people’s view that the vessel is less important than what it contains. 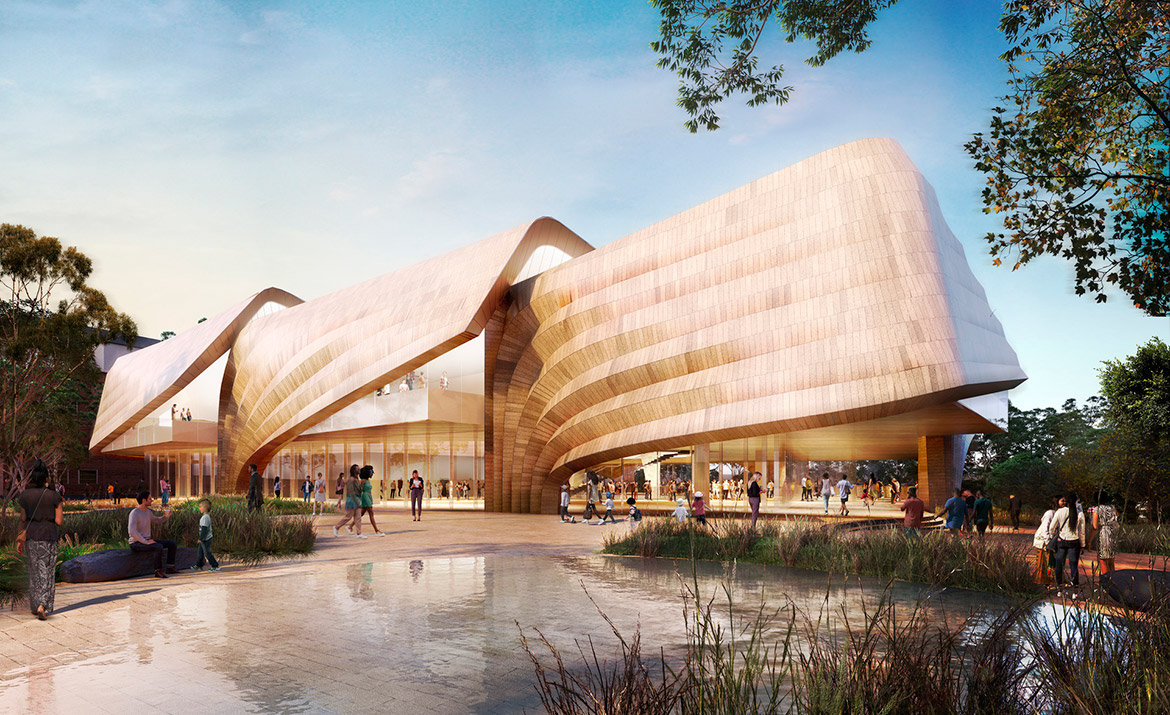 In this case, the vessel is an armature of AACC’s eight shell-like forms arranged around a central, glass-covered void. Each shell is rooted in the earth but rises from it to act more as a parasol than enclosure, and each rests gently on its neighbor. Clad in pleated, earth-colored metal, they suggest metaphor – turtle shells, walnuts or the woven, all-purpose dilly bags that Aboriginal people everywhere used to carry food and objects—but without explicit figuration.

The shells, whose pleated metal skin is fixed onto a steel structure, are self-supporting. The close pleating as they enter the ground–“hands in the sand”—evokes the gathering of reeds that is the first step in the creation of a basket or holding vessel that all indigenous peoples recognize. This idea of holding—be it food, or babies, or large groups of people—is a concept, explains Di Maria, that unites Aboriginal cultures.

So the AACC is conceived as a holding vessel, shaped almost entirely around curating the emotional experience of those within and about the building. Aboriginal people typically feel unsafe in enclosed surroundings (one reason why their high incarceration rates, 20 times that of ordinary Australians, are so shocking), so at ground level, the structure is largely transparent: more landscape than architecture. It’s also important that you cannot enter from the colonial boulevard of North Terrace. Instead, you’ll be welcomed by several circular ponds—some fresh, some salt—that are the traditional symbols of gathering. But to enter, you follow the landscape cues to the front, which faces the sun and the gardens. Here, before entering, you may participate in one of the daily Welcome to Country smoking ceremonies conducted in the purpose-designed, tree-shaded outdoor amphitheater.

Even the inside has an outside feel. Light falls throughout from a central rooftop oculus, through a gentle whirlpool of spaces to a below-ground performance space that, although open, can be separated by operable panels that are still part of the evolving design process. Here, you’ll witness storytelling and performance as well as artifacts, paintings, and the things that normally constitute “art.” One major gallery is entirely outdoors. Opening north-east towards kainka wirra, the lake that was a traditional meeting place for the local Kaurna people, it suggests a cathedral or, more persuasively, a cave, and is in fact modeled on the immense Giant’s Cave, an ancient Kaurna site in the Adelaide Hills.

In prioritizing experience over form, the whole is less museum than anti-museum; a moment to reset, a voice to the future as well as the past, an enticement to change. Says Di Maria, it is a persuasion that “what you thought you knew is a small piece of what you’re about to learn.” Already endorsed by its Aboriginal client groups (led by elder, Uncle David Rathman), the project is fully funded by both State and Federal governments and now needs only state approval to proceed. Honestly, it’s high time.