It is one of the great joys of train travel to pop up on arrival right in the city center. This is especially true compared with the taxi queues and suburban drear of arrival by air. But it brings an inevitable conundrum, since, even as it connects, any central station acts as a great blockage in the city’s heart. In Sydney, for the last century or so, this has been particularly pronounced. Now the new, $716 million adaptation of Central Station by Sydney’s Woods Bagot and London’s John McAslan + Partners (JMP), led by contractor Laing O’Rourke, is moving toward a remedy, set to open in 2024.

Inner Sydney occupies a narrow peninsula jutting into Sydney Harbor. Central Station was built quite late, in 1906, at the southern, landward end of that peninsula. This enchanting water-encircled topography ensured the city’s success yet hampered its expansion. To the north, Sydney built its famous Harbour Bridge (opened in 1932), and other bridges east and west. But the major land connection was south, and Central was in the way. 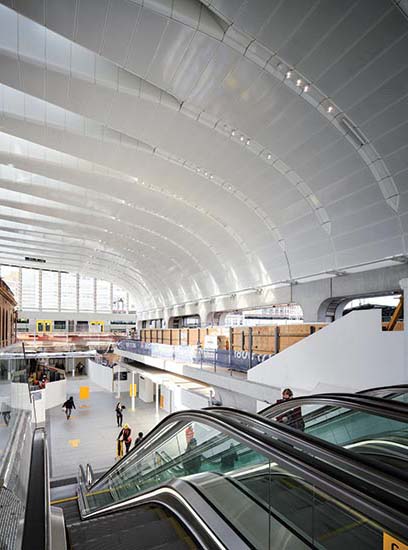 Although the metro will not open until 2024, people are already moving through the daylight-filled Northern Concourse Photo © Martin Siegner/FRMEZ, click to enlarge

Exacerbating the impediment was the colony’s largest brewery, dating from the early 1800s and directly adjacent. Both the brewery and the station had been built on swampy ground that, previously spurned for other uses, had contained a cemetery, a parsonage, a police barracks, a morgue, a gallows, and a convent. Fast-forward to this century, when the disused brewery was transformed into Central Park Sydney, a mixed-use complex that includes a garden-clad tower by Jean Nouvel as part of its elegant, street-connected master plan.

In connectivity terms, it was a start. But the problem of Central remained. The old station, designed by New South Wales government architect Walter Liberty Vernon (one of the few architects to support Walter Burley Griffin against the bureaucratic dilution of the latter’s prizewinning plan for Canberra) was a grand and much beloved sandstone job, with a vaulted hall and double-storey loggia running the full 500-foot-long street frontage. Catering to over 270,000 passengers a day makes it busier than London’s King’s Cross and St. Pancras combined.

The new architects were accustomed to complexity. Woods Bagot had already designed the award-winning Wynyard Walk, a pedestrian tunnel linking Wynyard Station, in downtown Sydney, to the vast Richard Rogers, Wilkinson Eyre, and Renzo Piano–designed Barangaroo residential and commercial tower development downtown. JMP had designed the 2012 pre-Olympic revamp of London’s King’s Cross station. The result, says McAslan, shows “the richness of what can happen when you work with, not against, what exists.”

The project has three main elements: the long north–south metro platforms, 80 feet beneath two existing intercity rail platforms; the east–west Central Walk that links to these from a new, eastern street entrance; and the lofty new “urban room,” known as the Northern Concourse, that mediates between the new metro station and the old sandstone building. 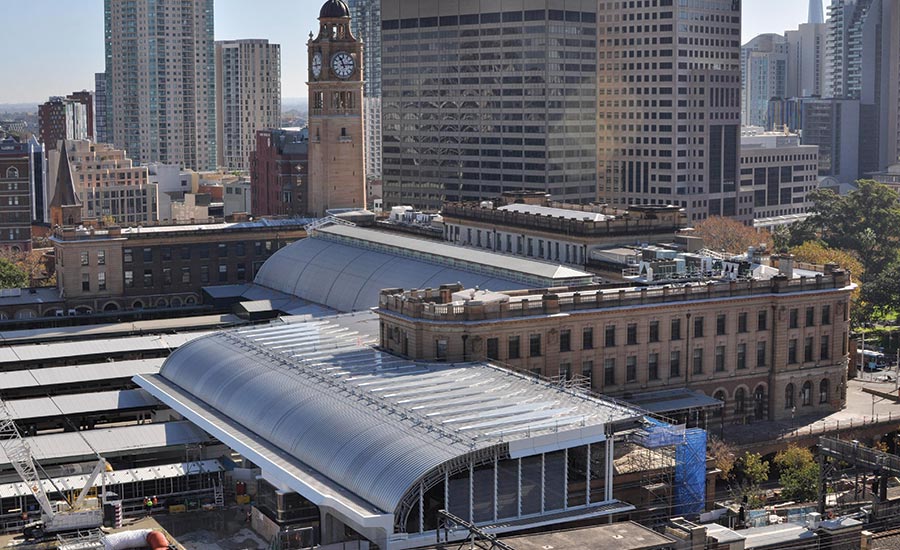 It sounds simple and, to the design team’s credit, the resulting project, though still only half complete, feels quite simple to the user.

Lead structural engineer Tony Lavorato from AGJV, the project-specific joint venture of engineering firms GHD and Aurecon, says it has been “very challenging” but extremely rewarding. That the result so closely resembles the earliest conceptual sketches is, he says, testament to the close collaboration, from the competition stage, among the engineers, contractors, and architects.

There were many challenges. For example, the immense 80-foot-deep trench that holds the “metro-box,” or subway tunnel, had already been excavated into rock, under an entirely separate contract. Within it, incoming trains and platforms had to be suspended. The project team also had to accommodate a sewer line, an existing pedestrian tunnel, and the 62-foot-wide Central Walk above the metro. When this trench proved too narrow for supporting columns, an ingenious strut-and-tie system was invented, propping 43-inch-square diagonal struts against the rock face.

Similarly, when the work revealed the handsome century-old Central Electric building that had been hidden by accumulated station works behind the grand old station, it was decided to retain and renovate the building as one wall of the new space. Because level differences meant exposing the building’s foundations, however, it had to be safely underpinned with an entire new understory. This, in allowing pedestrian movement through a grand new stone-clad arch from the street, transforms a dour dungeon space into a light-filled crossing.

What remains unchanged from those early freehand sketches was the great roof of the new station, which cantilevers 115 feet. This roof, comprising hockey stick–shaped steel trusses, clad with perforated white aluminum and fritted glass, was assembled off-site in Kurri Kurri, 100 miles north of the city, checked to be sure everything worked, and then disassembled for transport to Sydney. And work it does, sailing delicately above the heritage-listed Grand Concourse, Central Electric, and Stationmaster’s buildings. 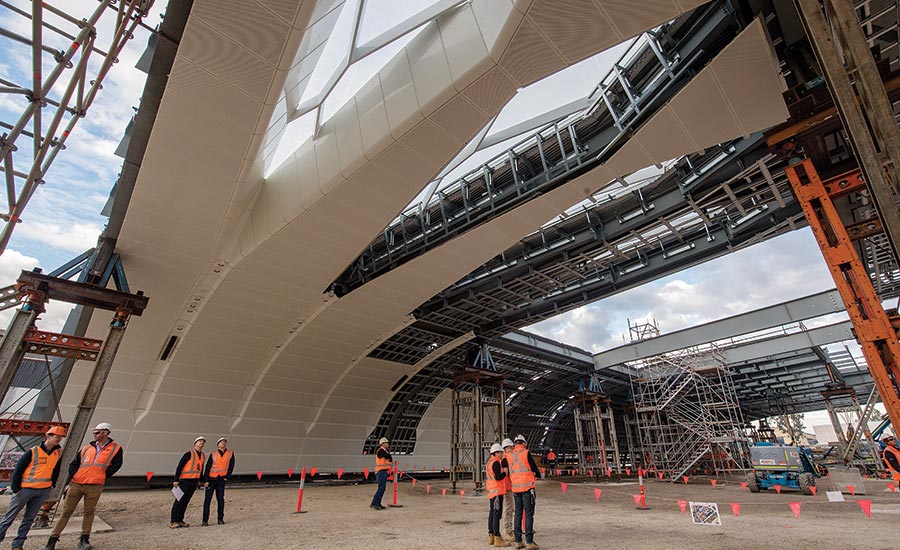 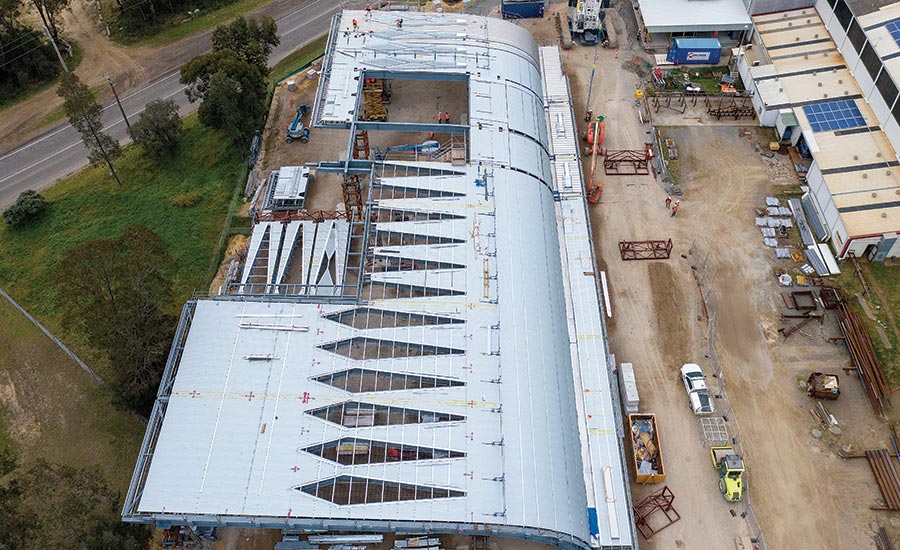 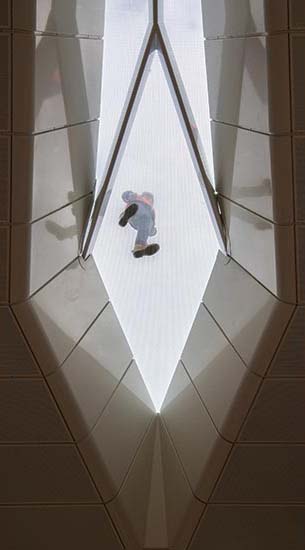 The truss-supported Northern Concourse roof was assembled first off-site in Kurri Kurri (1 - 3), before being taken apart to be transported to the city. Photos © CTH Bowen | Rusty Goat Media

This creates an airy transitional space and obviates the usual avalanche of wayfinding signage, providing easy visual links to streets and trains and suggesting the possibility of a new rooftop bar, all while upholding international standards for reversibility in adaptive reuse.

Already, though the metro doesn’t open for three years, this lofty and light-filled Northern Concourse is a pleasure to use. For me, it also offers a metaphor that points to even greater potential: unblocking Sydney’s congested heart. With new pedestrian connections east, north, and through to the old station, this project eases and enriches Sydney’s walking experience.

And there is even more promise. Sydney, naturally rich with spatial drama and surprise, is a great pedestrian city. Three further extensions to the Central project would greatly enhance this delight. They include extending Central Walk west, through to the proposed Atlassian tower (by SHoP architects with Sydney’s BVN); extending Prince Alfred Park to the station’s south across the rail tracks and encircling the park with buildings; and extending north, through the old station’s lower loggia to a revamped Belmore Park.

The current Metro project effectively installs a stent in Sydney’s sclerotic heart. These two further thoroughfares, in linking street to street and park to park, would triple that effect. Covid has prioritized walking as a transport mode in its own right; recognizing this, the new connections would let Sydney’s freewheeling pedestrian life percolate throughout. 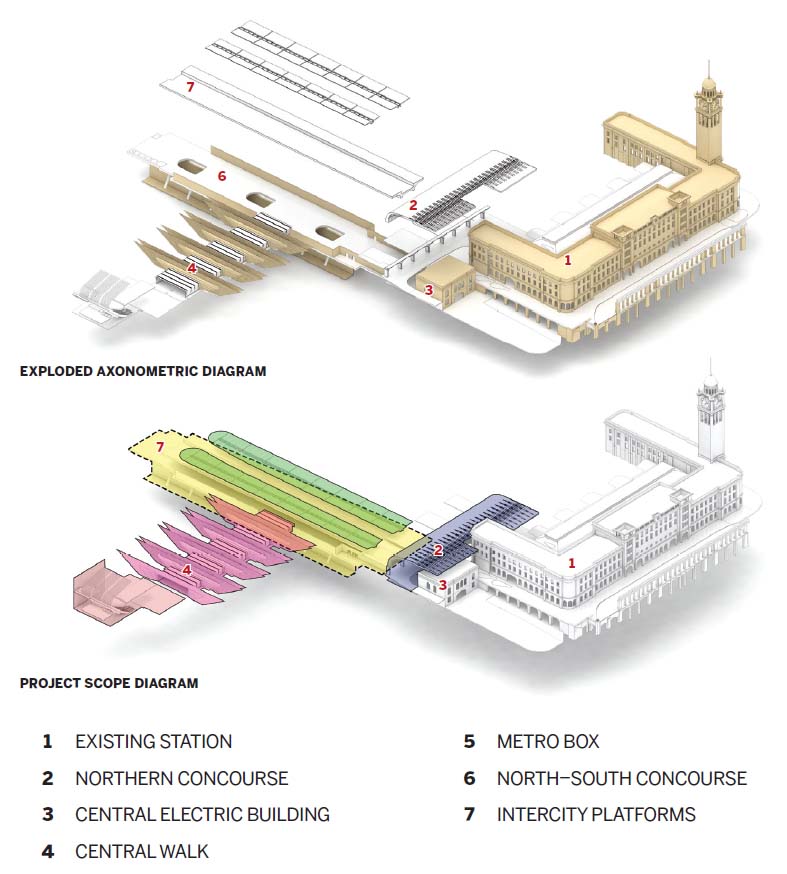