When you first see Shigeru Ban’s latest project in New York, you might not know that he designed it. Unlike his strikingly modern Metal Shutter House there, Cast Iron House, a luxury condominium building at 67 Franklin Street in the Tribeca neighborhood, is, on the outside, exactly what its name implies: a cast-iron facade, designed by W. Wheeler Smith and completed in 1882. It is registered as a New York City Landmark facade and is on the National Registry of Historic Places. But behind this fully restored facade is essentially a new building that is as contemporary as you would expect from the Tokyo-based architect. 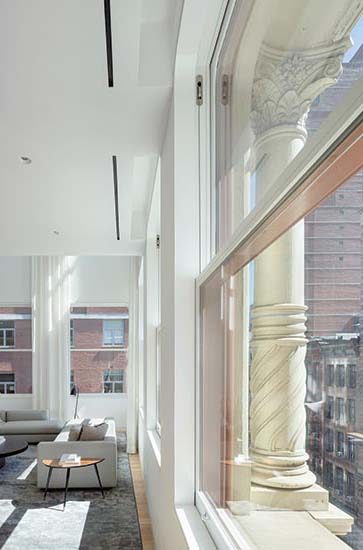 The restored facade of this converted commercial building (top), including its elaborate columns, is prominent even from the apartment interiors (above). Photo © Michael Moran, click to enlarge.

Indeed, the Pritzker Prize–winning Ban says of the project, which he designed with his New York partner, Dean Maltz, its executive architect, “To do a project in a landmark building presented a great opportunity and a challenge. I wanted to pay respect to the history, so I treated the existing facade as a relic. I designed the interior as an independent structure, with the facade as a screen.” Thus, he says, “I was able to express my own idea while maintaining the historic architecture.”

The corner building—once called 361 Broadway and designed for the textile trade that flourished in the area at the time—has a large retail space on the Broadway side, so the architects moved the residential lobby around the corner to the former loading dock (which was not landmarked), adding a stainless-steel and glass canopy and lowering the floor to make the space, with its 20-foot-high windows, accessible. The original building’s six floors became seven, and two duplex penthouse units were added to the roof, to create 13 duplex apartments—a low-rise counterpart (in a mostly low-rise neighborhood) to the city’s ever-taller new residential towers. 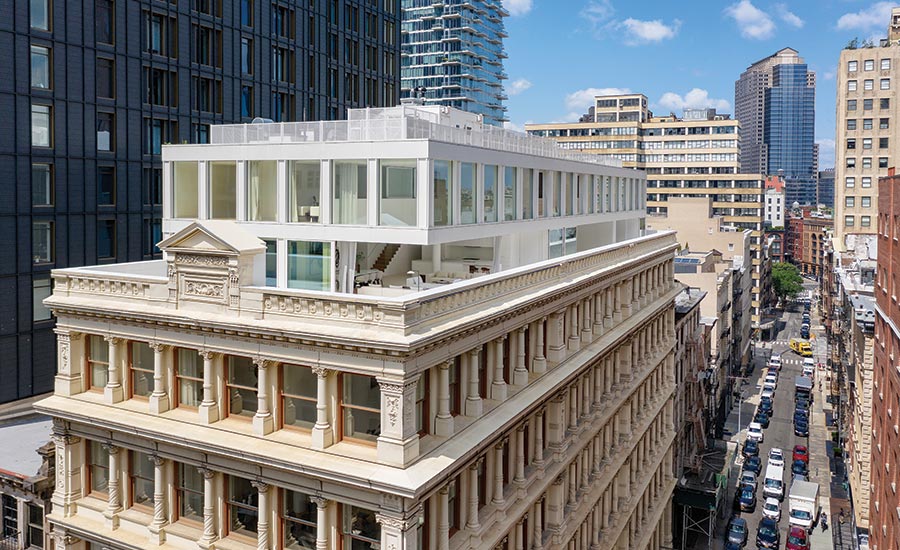 A two-story penthouse structure added to the original building (1) is set back to avoid views of it from the street and allow for a terrace (2). Photos © Michael Moran 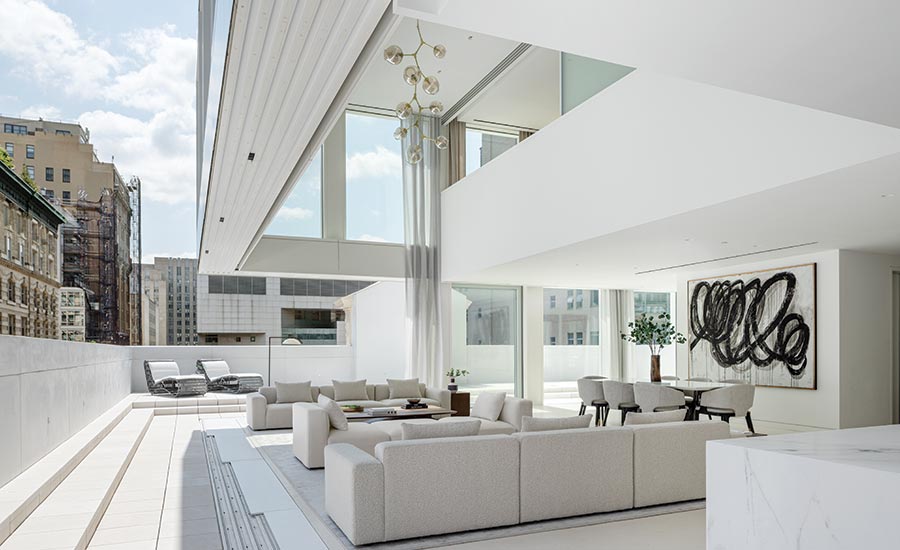 Maltz likens the insertion of the new structure into the existing facade to putting a ship in a bottle. The existing floor system, he explains, was “structurally overweight” and had extremely tall floor-to-floor heights. By replacing existing floor slabs—which were around 3 feet deep and made of steel beams with brick arch vaults and concrete—with lighter, thinner ones, made of new steel beams, metal decking, and concrete—it was possible to add a seventh floor to the original six. Floors were detached from the facade in some places to allow for additional floor plates and to create the double-height spaces in each apartment that the architects originally envisioned. But the added floor—which involved lowering the second floor and raising the third—would have created a misalignment between the windows and floors, which would not have passed muster with New York City’s Landmarks Commission. Therefore, at the third-floor level, a 1½-inch-thick horizontal steel plate attached to the floor slab aligns invisibly with the center mullion of each window. The windows themselves are 5 feet 8 inches wide, and range in height from 10 feet 2 inches on the second floor to 7 feet 10 inches on the sixth floor of the original building.

Atop the building, the architects set the two-story, white metal-and-glass penthouse structure back from the parapet; the penthouse’s upper-floor cantilevered Vierendeel truss allows its lower floor’s telescoping sliding glass doors to open fully, making the upper floor appear to float above it. An independent structural system carries the added load of the penthouse through new steel columns to the existing foundation. Not only did the Landmarks Commission approve this design, they cited it as a model for similar projects. 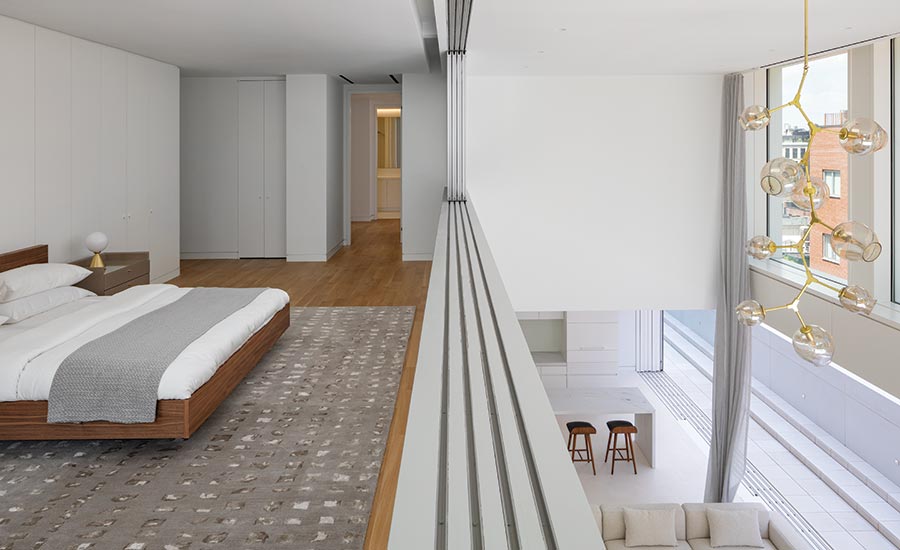 The upper levels of the duplex apartments have views to the public spaces below (3). The generously sized windows, some as tall as 10 feet, provide ample daylight to both levels (4). Photos © Michael Moran 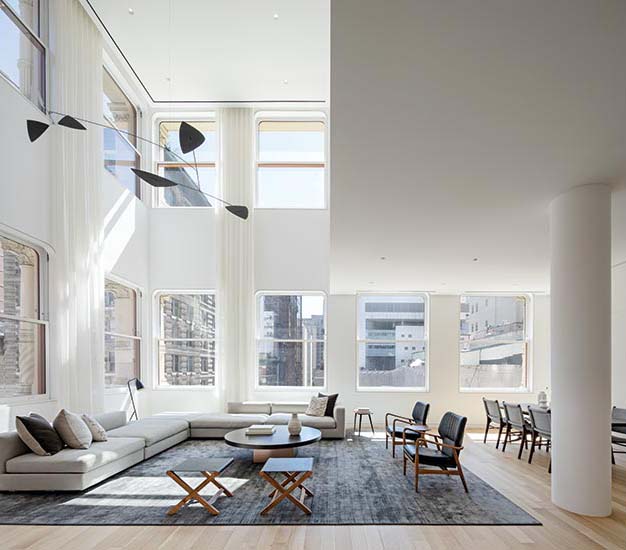 In the lobby, a glass wall on the south side overlooks a courtyard planted with bamboo trees, at the subcellar level (which also houses amenities like a spa, gym, game room, and children’s room). The lobby, with its white marble and Venetian plaster walls, and a seating area with tables designed by Maltz, has a single original cast-iron column that, because of the lowered floor, is now supported on a white marble pedestal. The wall to the left of the entry—which has an artwork by Ban that uses the “module H” aluminum-screen system he designed for the French luxury brand Hermès—leads to the two elevators that open directly into each apartment. 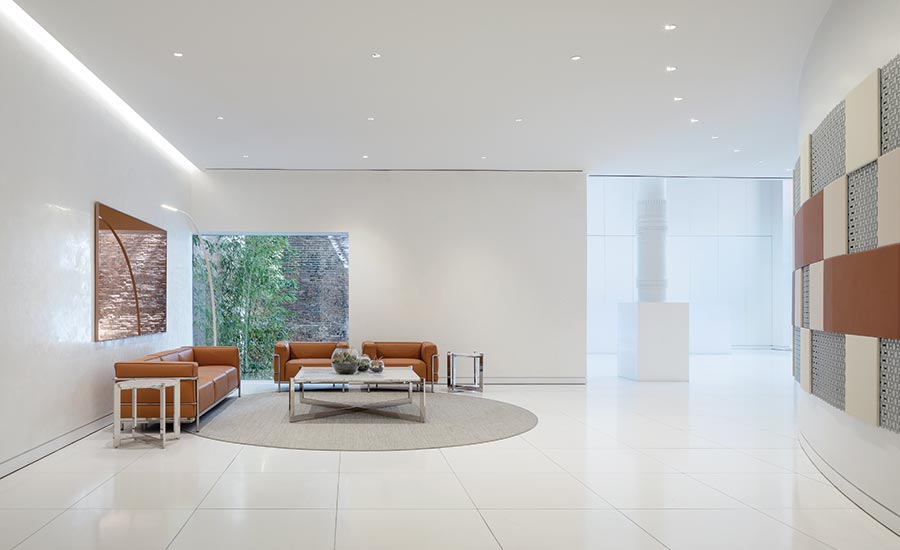 Bamboo trees planted in a lower-level courtyard are visible from the lobby, where a marble pedestal supports an original column and a screen design by Ban adorns a wall. Photo © Michael Moran

In the apartments behind the original facade, there are double-height living room/kitchen areas, and the partial second floors have windows and openings that offer views to the outdoors and the spaces below. The original windows offer a nice contrast to the rather spare new interiors, with their sleek spaces, cabinetry and details, and Ban-designed aluminum door handles. The lofty penthouses have continuous upper-level windows; on their lower levels, floor-to-ceiling glass doors open onto a terrace and the parapet, where a glimpse of the original pediment, even seen from behind, is welcome. While Ban’s design is emphatically contemporary, a bit more texture might have been in order, although minimalism has been the dominant style in new high-end apartments for some time. Ultimately, however, Cast Iron House amply demonstrates, as Ban says, that it’s possible to respect history and still be modern. 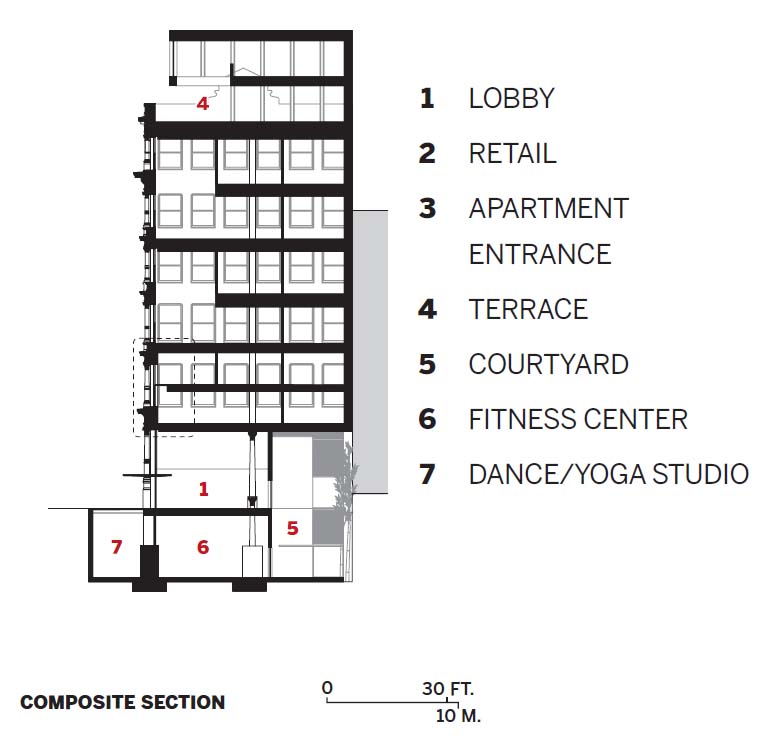 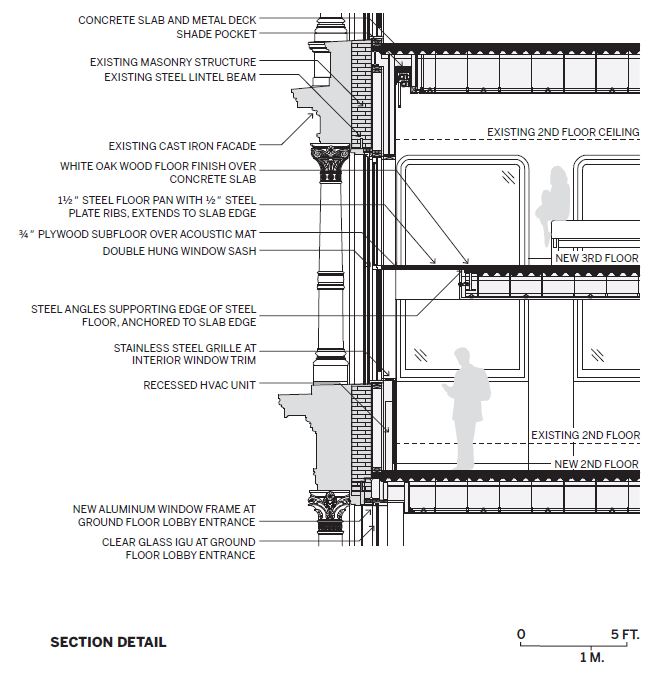