As part of the third Exhibit Columbus, which opened on Saturday, a vanguard of thought-leading architects has created temporary small-to-medium-scale public installations in Columbus, Indiana to strengthen community connection and reinforce the value of the city’s modern landmarks. The installations are sited adjacent to historically significant buildings and contemplate big questions about sharing the planet with other species, environmental crisis, surveillance, representation, colonialism, and the importance of essential workers. In that way, they gesture toward a broader engagement with the rest of the world and anticipate the role of a small city in the Midwest in envisioning the planet’s future. 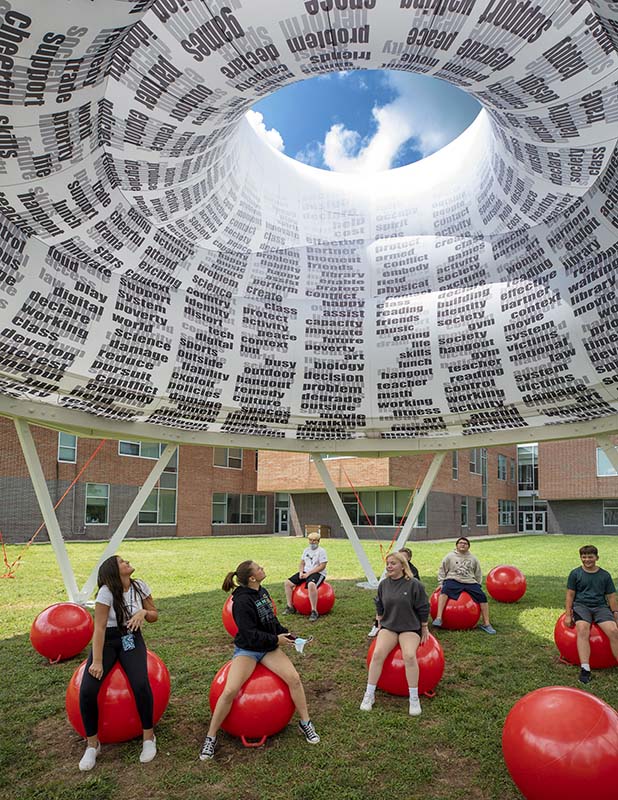 The projects include University at Buffalo professor Joyce Hwang’s To Middle Species, With Love, a series of houses for bats and other “non-charismatic species” installed in Mill Race Park, designed in 1993 by Stanley Saitowitz and Michael Van Valkenberg. Chicago-based Future Firm’s Midnight Palace lights up a streetscape outside of the 1971 Sears Building—designed by Cesar Pelli and Norma Merrick Sklarek of Gruen Associates—using an assemblage of light bulbs, conduit, and screens for films paying homage to essential workers and night owls. And Madrid-based Ecosistema Urbano’s Cloudroom is a 50-by-32-foot inflatable sun shelter with word-cloud graphics drawn from the 1992 Declaration at the United Nations Rio Earth Summit, situated on the lawn of Perkins & Will’s 2007 Central Middle School.

The extraordinary architectural legacy of Columbus is well known and widely embraced. As the story goes, in 1942, the First Christian Church of Columbus commissioned Finnish architect Eliel Saarinen to build its expanded facility in the modern style. J. Irwin Miller, a descendant of a local department store owner-turned-banker-and-industrialist, had learned about modern design at Yale and convinced the church to build it. By the early 1950s, Miller had ascended to chair of the Cummins engine corporation. He commissioned Eero Saarinen to build his family home, then established a foundation to pay architect’s fees for public buildings that selected modern architects. Later, former Saarinen associate Kevin Roche designed several of Cummins’ headquarters and manufacturing buildings. 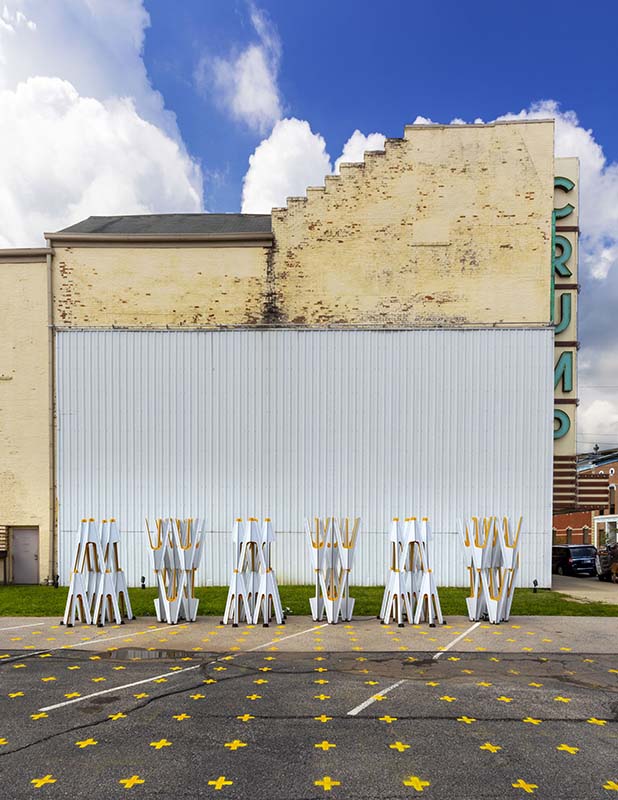 In 2015, the Landmark Columbus Foundation was established to preserve and continue the city’s extraordinary design legacy, with Exhibit Columbus launched the following year as a biennial program activating the city’s modernist monuments through urban interventionist-style installations, symposia, and juried awards to emerging regional and international figures. New Middles, curated by Iker Gil and Mimi Zeiger, takes cues from the Midwest, middle America, middle or mid-size cities, mediation, and in-betweenness as themes. (Each is a two-year cycle, so they took place from 2016–2017, 2018­­–2019, and 2020–2021.) The exhibition includes a who’s who of the thinking curator’s designers, including Sam Jacobs, Olalekan Jeyifous (recently featured in MoMA’s Black Reconstructions), and Lola Sheppard and Mason White. Several of the architects are based in regional and small-to-medium size cities, among them Derek Hoeferlin (St. Louis), Jei Jeeyea Kim (Indianapolis), Ang Li (Chicago), Natalie Yates (Muncie, Indiana), Ersela Kripa and Stephen Mueller (El Paso, Texas), and Dream the Combine (Minneapolis).

As a small, ostensibly well-governed city in the middle of the United States, the project’s curators and directors argue, Columbus has a role to play to adapt to large-scale planetary crisis by initiating “small acts of future-making.” With half of the globe seemingly on fire, flooding, or experiencing famine and civil conflict due to the climate emergency, it’s crucial to mediate between the hyper-local interests of places like Columbus and the needs of all.

In small ways, through its ongoing willingness to indulge visitors in sincere, self-critical discussions about colonialism, its community of care for each other, and investment in public places, Columbus could be a model. Of course, we also want there to be well-governed national and global institutions to support the rest of us—not have support contingent on non-profits hustling for corporate donations—and to enforce rule-making to protect human rights and biodiversity everywhere.

The 2021 edition of Exhibit Columbus runs until November 28.