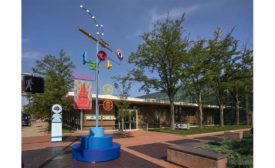 The third edition of the biennial show examines New Middles.

Stephen Zacks
No Comments
Many states have clamped down on eminent domain. Recent court cases signal that New York won't be following their lead. Seizing another person’s land is a pretty strong-armed way of doing business. Property owners have often challenged eminent domain in courts, and lawmakers in many states have tried to limit its use. Recent decisions in New York show that the state won’t hesitate to apply the broadest interpretation of the law to make mega-developments happen. Image courtesy Columbia University A recent court decision allows Columbia University to move forward on its planned 17-acre expansion in NYC. A portion of the
Read More

For more than a decade, Cornell University has grappled with its plan to construct a new facility for its College of Architecture, Art and Planning (AAP). On June 8, however, a backhoe began digging up dirt at the building’s proposed site—the north edge of the Arts Quad—perhaps marking the end of an epic drama that has involved a large cast of characters, a global financial crisis, and the looming threat of academic decertification.

Upgrades to an early modern apartment building make it modern once more.