Miami-based architect Germane Barnes, who was part of the exhibition Reconstructions: Architecture and Blackness in America at New York’s Museum of Modern Art, earlier this year, has been awarded both the Wheelwright Prize and a Rome Prize to conduct research into the African diaspora and classical architecture. In a conversation with RECORD’s editor in chief, Cathleen McGuigan, Barnes discussed the impact of racism in the city.

How has racism been embedded in Miami since its beginnings?

Miami was constructed as a water-dependent city, built by Black bodies who came from water-driven places like the Bahamas, Trinidad, Jamaica, Haiti. And the irony now, in the ongoing reconstruction of Miami, is that those living in the vulnerable, water-rising communities are fleeing to get to the higher, inland areas that were not desirable before.

The Black people who first built the city at the turn of the 20th century were forced to live in Good Bread Alley, now called Overtown, or Lemon City, now called Little Haiti, places that are nowhere near the water. With shotgun houses and poor plumbing, if any, the bad infrastructure led to disease. As a result, people started to simply say, “Go over town” meaning, to go where the Black people live. And so the neighborhood came to be known as Overtown and has kept that name ever since.

The various ethnicities of the city are nuanced. I identify as African-American, but many identify as Black because they’re from the diaspora, and you find smaller enclaves, such as Little Haiti; Allapattah, where Dominicans live; Little River, a mix of Dominicans and Cubans; or Opa Locka, an African-American town.

What is happening in those communities today?

They are at risk because they are the highest-elevated communities—the places that Black people were forced to live are actually the safest, should water rise up. Who lives on Miami Beach? It’s not Black people. You go from South Beach all the way to North Beach, and it’s not us.

With sea-level rise, people with money and influence are pouncing on those higher neighborhoods. “Well,” they say, “actually, we need that land back because we didn’t look far ahead and realize that when all this water rises, we’re going to lose the beach—and now your location is the best place to live. I’ll seduce you with enormous amounts of money.”

Everyone likes to blame gentrification—it’s the bogeyman. But there’s an omission in that thinking. In areas like historic Coconut Grove or Overtown or Little Haiti, many local residents are marginalized and poor. Should a developer approach them and say, “I will give you $400,000 for your house right now,” these are amounts of money they’ve never seen.

There are, obviously, predatory developers. But generational wealth has typically been absent from the Black community. Any opportunity to benefit from family property is one that most people leap at. In Coconut Grove, settled by African-Americans and Bahamians, many individuals—or their grandparents or great-grandparents—might have owned their home. But now you can’t get a loan to improve the house, because you look like me. So, you say, OK, I will sell it for $1.2 million and watch it become an OMA building. Or, if I try to keep it, I have to live in substandard conditions.

So there’s a very complex infrastructure that is not as simple as people moving in and out. People are criticized for taking a payday, which significantly increases their quality of life. But, as a result, we do see neighborhoods start to shift and change. And material culture is lost.

In Little Haiti—as in Coconut Grove and Wynwood—Black legacy is disappearing. Little Haiti used to encompass much of what’s now the Design District, one of the most affluent areas in Miami.

And it is being taken over by developers of the Magic City Innovation District, a massive $3 or $4 billion live/work tech hub. But it’s at the expense of many people who call Little Haiti home. And Little River is maybe 30 or 40 percent under siege, because it’s the next available location, slightly north of Little Haiti.

How is the city a laboratory for your teaching at the University of Miami?

In the School of Architecture, our focus usually includes resilience, because we’re in a city on the water. But the way I identify resilience and teach resilience and practice around resilience is social resilience, not necessarily infrastructure and climate.

For me, it’s how do we deal with the stratification of race and ethnicity in the built environment? And how are the ways in which our rituals, our cultural histories and legacies are either promoted or stifled because of architecture, infrastructure, and urban planning?

I teach a seminar called Criminal Architecture, a survey from the Great Depression to today, that shows the ways in which the built environment has inflicted harm on people of color. And that’s not just Black, it’s Asian, Hispanic, and Native American. These are the infrastructures that were completely shaped by urban planners, architects, and landscape architects to say, we want you to live like this. I teach this to help students understand the ways in which the human body needs to be resilient within these larger infrastructures, or else we perish.

What are some historic examples of that planning?

In Miami, there are segregation walls that still exist. A public-housing complex in Liberty City, completed in 1937, was built in direct response to Overtown’s overcrowding and disastrous living conditions, to provide shelter for at-risk people. But opposite it is a predominantly white enclave, and the response was, you’re not building the housing here.

So the negotiation was, we’ll allow it if you build a barrier—a 12-foot-tall wall that literally blocked everything from the white side to the Black side of the street. The land on the Black side is actually 4 feet lower than the white side’s, so the wall was essentially a 16-foot-high barricade to splinter these districts.

They’ve knocked down most of it, but there’s still the 4-foot elevation, and it’s been turned into a linear park of sorts.

How did you begin your practice in the city?

I was fresh out of architecture school and began work on a project in 2013 with the Opa Locka Community Development Corporation (CDC), a Black-led community organization run by a visionary mayor, Willie Logan. He received a grant to redevelop a small area, less than two miles in diameter, called the Triangle—at one time, the Triangle had the highest murder rate in the country. So it was a real opportunity to figure out how art, architecture, infrastructure, and urban planning can help redevelop a community without displacing individuals. That was how I met [landscape architect] Walter Hood—and also [designer/artist] Olalekan Jeyifous, who were two other participants in the MoMA Reconstructions show.

Olalekan did the mural for the arts-and-recreation center, and I did the preliminary design. And then Walter Hood did the street. It was an amazingly large, urban-scale project: we built a park, an arts-and-recreation center, a gallery, and rental space. They have an arts charter school and an urban farm. And they’re currently renovating some shipping containers to do a small marketplace.

I do studio projects in vulnerable communities, where the students have never visited, to remind them that these places exist and are as important as a Coral Gables or a Miami Beach—just so the students can get exposure and notice very small things. In Coral Gables, for example, there are tons of trees and shade—you don’t mind walking down the street there—but go to Opa Locka, and you won’t see a tree for a mile and a half. You will absolutely hate waiting in the sun at that bus stop.

I always tell people it’s not my job to fix white supremacy. It’s my job to educate about what has happened and is happening.

There are things that many people just don’t understand. But, when we talk about resilience, it’s more than just how far will the water rise? It’s also about who are we taking advantage of, and who are we protecting within the built environment. 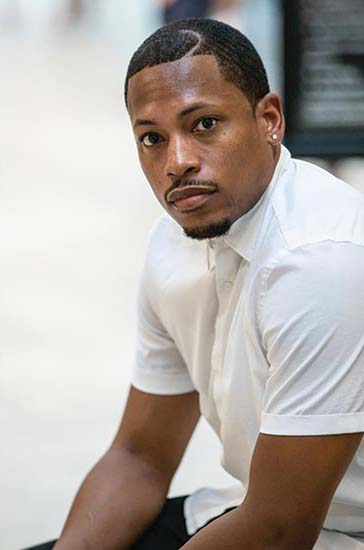 The places inland that Black people were forced to live are actually the safest, should water rise up.