The Legacy of Racism in the Making of Cities and Communities

The highly anticipated exhibition at the Museum of Modern Art in New York, Reconstructions: Architecture and Blackness in America, takes its name from the historic two decades that followed the bloody Civil War. Yet, despite the reference, the show (through May 31) isn’t a call to a return— the aim is to reflect on the legacy of a country attempting to redefine itself. While the works commissioned from 10 prominent architects, landscape architects, designers, and artists place a critical lens on systems of racial oppression, “the premise is not to press for solution-based designs,” according to the cocurators, Mabel O. Wilson, professor of architecture and Black studies at Columbia University (and 2019 RECORD Women in Architecture honoree), and Sean Anderson of MoMA. Instead, the process of interrogating the past and the present, as a way to insist on liberating futures for Black lives, gives a new understanding of what architecture can actually do. 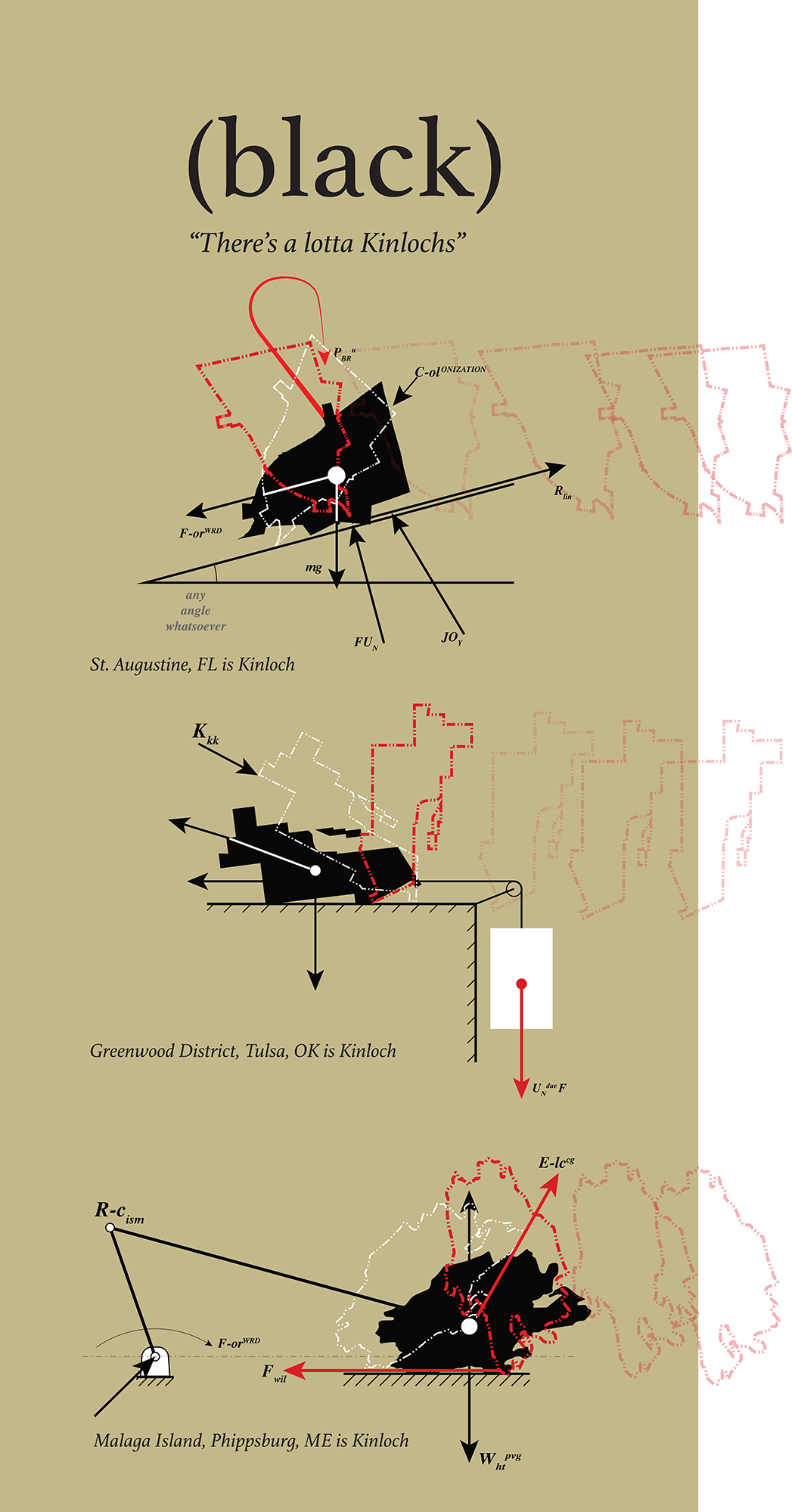 The opening of Reconstructions has come on the heels of a year we can’t wait to put behind us. Still, the show’s challenge is not to take its timeliness for granted. The contributors’ work confronts the very structure of the design field and offers insight into the often-overlooked motivations of many BIPOC architects who have actively fought against the profession’s ambivalence toward engaging social issues, especially those relating to race. Though using such conventions as plan, elevation, and section— as well as video, collage, and sculpture— the designers foreground new ways of making. In all of the work on view (and in the accompanying catalogue, which serves as a “field guide”), the tension between time and Blackness serves as a baseline for spatial speculations, rooted in the history of 10 American towns, cities, and communities, each of which is explored by one of the contributors.

Formed as the Black Reconstruction Collective (BRC), they include Emanuel Admassu, Germane Barnes, Sekou Cooke, J. Yolande Daniels, Felecia Davis, Mario Gooden, Walter Hood, Olalekan Jeyifous, V. Mitch McEwen, and Amanda Williams. A video installation by David Hartt is also included. While the subjectivity of each individual is as varied as the shades of black (expressed in Williams’s recent project What Black Is This You Say?), the collective’s manifesting statement deviates from the objectivity of the vested architecture canon, conjuring a new directive:

The Black Reconstruction Collective commits itself to continuing this work of reconstruction in Black America and these United States. We take up the question of what architecture can be—not a tool for imperialism and subjugation, not a means for aggrandizing the self, but a vehicle for liberation and joy.

The manifesto, in bold black letters on a 10-foot by 10-foot hanging canvas, covers the namesake of MoMA’s architecture gallery, the department’s founder and a respected architect who was also a well-known fascist. The statement itself may read as a new call to action, but, for many, the call draws its strength from the continuation of the labors, desires, and catalytic ideas of those who came before. The generations of calloused hands that built this country understand the work has never ceased, and the statement rallies behind those who have done the construction and will continue to build. 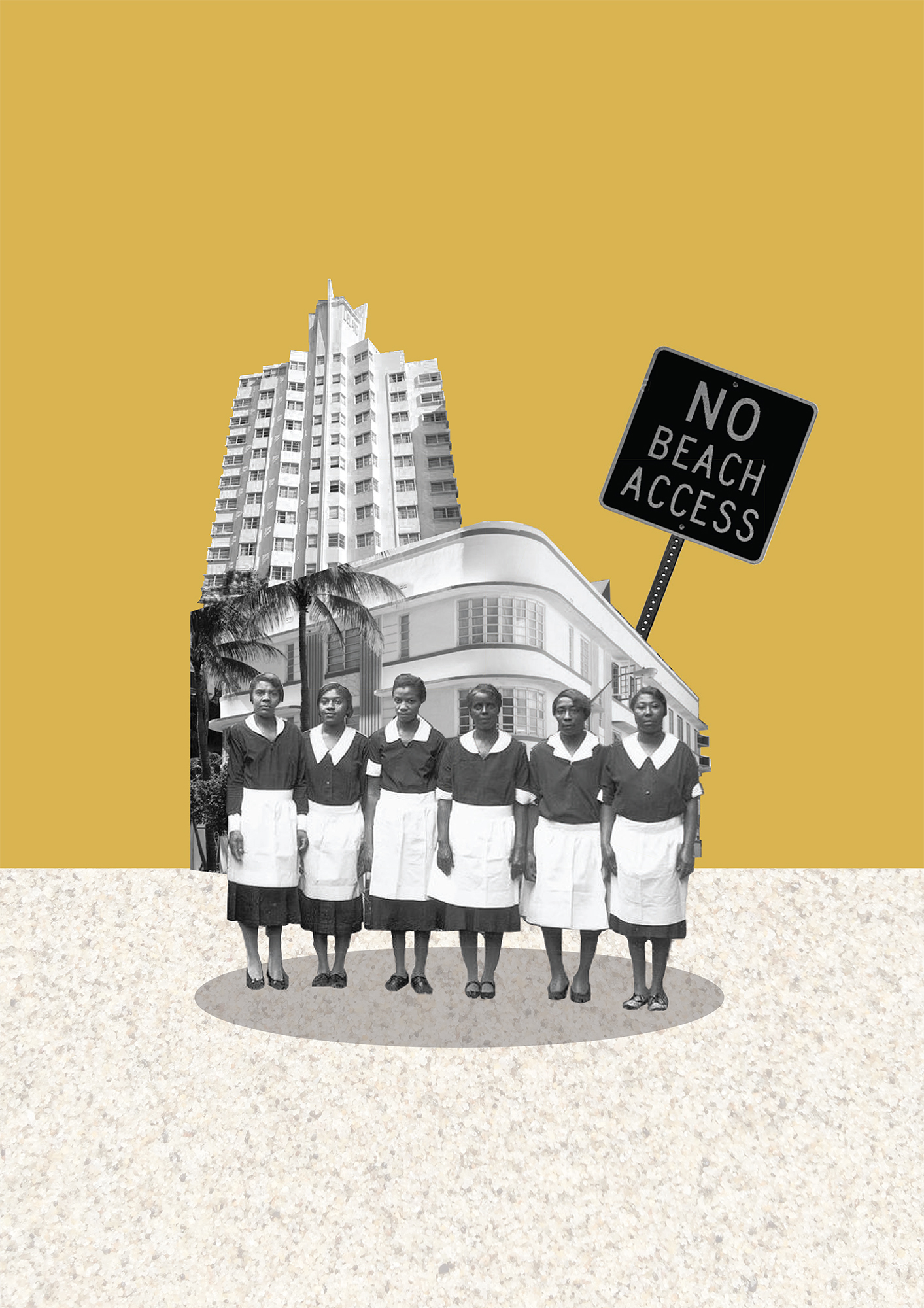 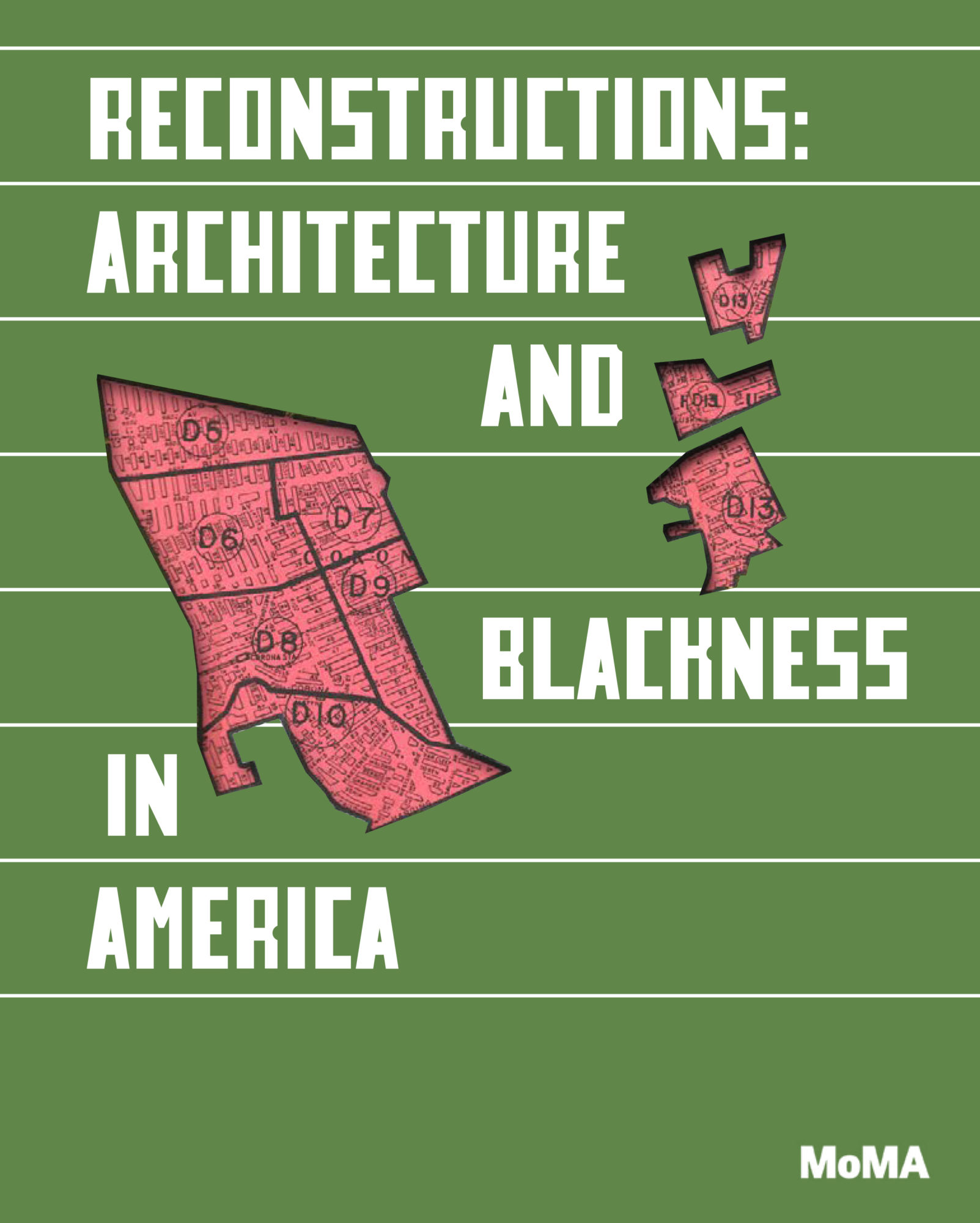 Cover of the exhibition catalogue Reconstructions: Architecture and Blackness in America, published by The Museum of Modern Art, 2021.

Inside the gallery, rebellious spirits work at multiple scales. Mario Gooden’s The Refusal of Space is a “protest machine,” reconfigured from a Nashville streetcar, made of black painted aluminum and wood. Adorned with a blackened Confederate flag, and using photography, video, and sound, the structure reimagines the occupation of segregated space by Nashville student protestors in the 1960s. As Pittsburgh’s Hill District currently prepares for an upending development in the near future, Felicia Davis’s hanging soundscape sculpture allows a reciprocity between the body and the environment, to suggest a practice of collaboration and co-construction with the community. The Black Panthers’ Ten-Point-Program from 1967 is the source for Walter Hood’s invention of 10 towers— materialized as black, human-scaled models— to regenerate an Oakland, California, neighborhood neglected by systemic disinvestment. Amanda Williams confronts the intersection of legal ownership, property, and Black spaces in Kinloch, the first historically Black town established in Missouri, by showcasing a letter-sized patent, along with maps and video, for “a method for navigating to free Black Space” from the U.S. Patent and Trademark Office. 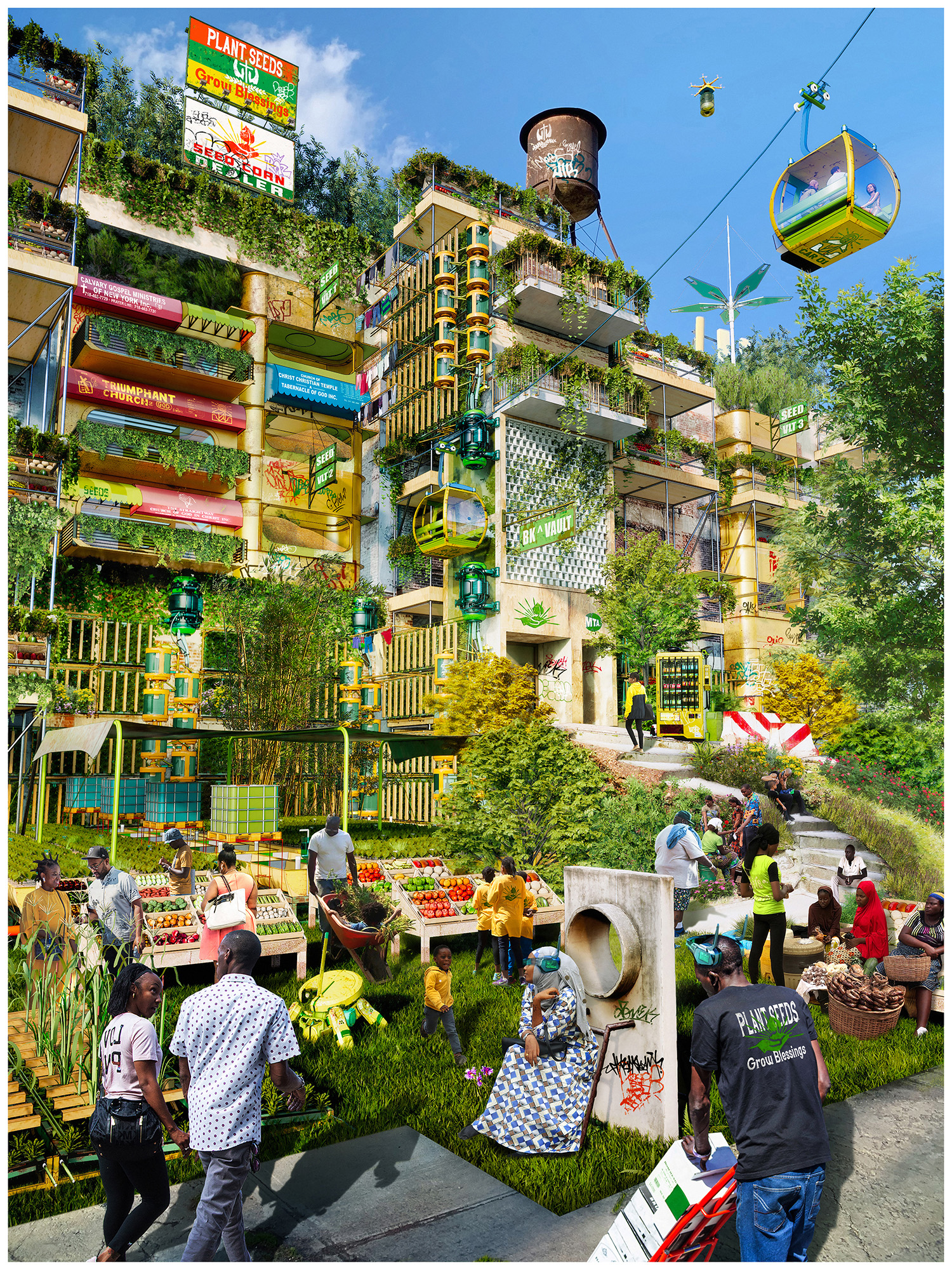 An investigation of material staples in the Black community, such as hot sauce and the beauty-salon basin, makes its way into Germane Barnes’s suspended exploded axon of a kitchen—a key Black space in Miami’s diverse Black landscapes. Mitch V. McEwen incorporates video of Black women dancing and delivering architectural fantasies for the city of New Orleans. McEwen’s piece, inspired by artist Kristina Kay Robinson’s Republica: Temple of Color and Sound, hinges on the counterfactual and ponders what the city might have looked like as a Black nation-state if an enslaved uprising had succeeded. (Mid-video, the feed is abruptly interrupted to give a “Warning Advertisement” of the danger of being in the white space of MoMA.) J. Yolande Daniels’s black city creates a glossary to recount the contributions of African-Americans to the founding of Los Angeles. One such figure is Bridget “Biddy” Mason, a formerly enslaved woman who used the spatial tactics of buying properties to aid her in her philanthropic work. A new series of Olalekan Jeyifous’s speculative futures visuals repurposes the existing, troubled Metropolitan Transit Authority as the Main Threshold Access, to better serve Black Brooklyn’s mobility. Finally, with all the style and grace of a DJ, Sekou Cooke uses elements of hip-hop to remix the tragic history of displacement of Black residents in Syracuse, New York, with a new proposal for place-keeping tactics in public spaces.

The work is complex, exhaustive, and inspiring. The gallery is overwhelmed by unknown history, enlivened with each piece; the installation is visually commanding and rigorous, stretching back to the past while illuminating possible futures.

In trying to peel back the layers of Blackness and architecture, the show challenges the blinded perception of the discipline as innately progressive, as the field continues to falter under the weight of structural racism. The profession’s lack of reflection is heightened by the country’s obsession with what was and what is to come, while obscuring whatever present realities engulf us. Blackness often falls victim to this cycle of memory and time. The temporality of the white gaze on the Black experience comes and goes, rising at the breaking points of pain for Black and Brown folks. The most recent cycle of the gaze—due to the renewed momentum of the Black Lives Matter movement—has been more demanding of our attention. Expressed empathy becomes interchangeable with taking action, making claims that Reconstructions is a timely endeavor. However, the voices showcased in the exhibition declare that Reconstructions was inevitable because the work for Black freedom was never prioritized—so the task never ceased. This poignant and needed work is not only a living archive but a celebration of the continued fortitude in bringing consciousness to the profession. By engaging the labor of resistance against the oppressive systems within the field, the show demands that architecture take an active part in remaking American society. Reconstructions and the BRC collective, which plans to continue its efforts beyond this moment, is not a new wave of architectural thought; it is the field and MoMA that are just now catching up.