When it comes to returning to offices they abandoned when the Covid crisis hit more than a year ago, architecture firms are playing wait and see.  “Our plan in early summer was that, come September or October, we would ease back into working in the office,” says Joe Tanney, the founder of Resolution: 4 Architecture, a small Manhattan firm. But now, thanks to the Delta variant, he says, “we’re putting the brakes on that. The yellow lights are flashing.” The firm is letting employees decide whether to stay home or come to the office. “We won’t put any pressure on them,” Tanney says.

All over the country, architects are thinking about when – and sometimes if – they will return to offices that have been vacant since early 2020. But even the best-laid plans have been complicated by the variant. “It’s a moving target,’’ says Kai-Uwe Bergmann, a partner at BIG and the firm’s director of business development.

In addition, many architects say they wouldn’t want to return to their old offices full-time even if they could. Tanney, who lives in Brooklyn, says he’s discovering that “quiet time for thinking is highly under-rated.”

The Miami-based firm Strang polled its 50 employees about returning to the office. Everyone responded; 34% said they’d like to work from home 100% of the time, while only 12% said they’d like to be at the office 100% of the time. (The majority chose various home/office splits.) And 84% said they are at least as productive working at home as working at the office. That means founder Max Strang feels little pressure to reopen. Which is lucky, since, he says, “the Delta variant derailed our initial plans to bring people back. Now, with Florida being a hotspot and many members of our team having young kids, we are letting people decide what’s best for them for the time being.” Ironically, he says, “a month prior to the pandemic ramping up in early 2020, we signed a lease to almost double the size of our Miami office. Talk about bad timing.” But that means that if his employees do return to the office, they can have more space than they had before the pandemic, which ought to reduce the possibility of transmission. 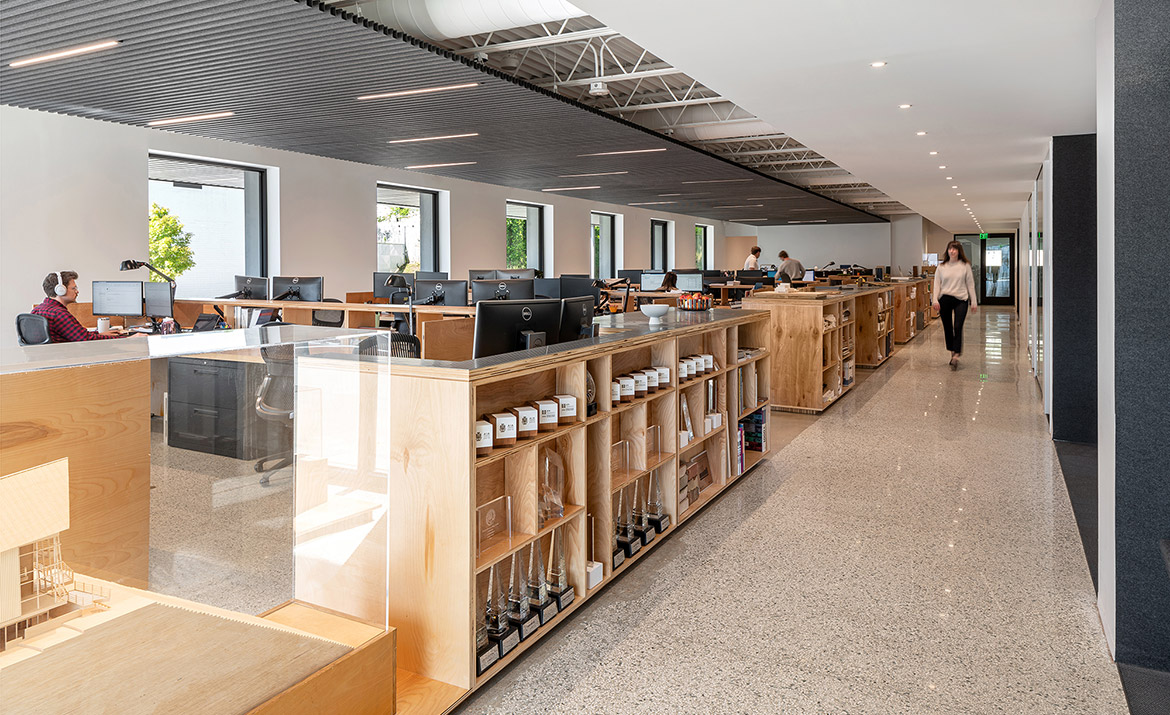 Archimania in Memphis has as much outdoor as indoor space for working and is letting employees decide whether to come into the office.

Wynne Yelland and Paul Neseth, founders of Locus Architecture in Minneapolis, sent their half-dozen employees home when the pandemic hit. “But Paul and I continued to work in the office, socially distanced, because we had everything we needed on a server there,” says Yelland. “We considered ourselves a pod.” During that period, they built partitions between workstations, following Minnesota guidelines. Employees began returning last October, but when Yelland contracted Covid in January, he and Neseth sent the staff home again. A week later, after everyone tested negative, they began returning to the office. The partitions remain, but Yelland says “we hope to go back to a communal, open office setting when it’s safe to do so.”

In Memphis, the 18-person firm archimania is also blessed with space, including outdoor space. In 2018, the firm’s leaders decided to turn two nondescript commercial buildings into their new offices. In the process, they transformed the parking lot between the two buildings into a landscaped courtyard. As a result, partner Barry Yoakum says, “We have as much outdoor space as indoor space, so we can do meetings outside.” That’s one reason, he says, that “pretty much everybody has been back since June 1. We didn't tell them they had to come back, but we said it's probably time.”

Thomas Bercy, of the Austin-based firm Bercy Chen Studio, was also hoping his employees would be back by now. “But as Covid cases started increasing again in Austin,” he says, “we decided to remain flexible and allow remote work. That said, with our firm 100% vaccinated, we have decided to encourage returning to the office.” Though working remotely was surprisingly effective during the pandemic, Bercy says, “Architecture is a creative profession. We feel that in-person interaction is critical to the sharing of ideas, drawings, and communication in general.”

Planning for the next stage of the pandemic can be especially tricky for firms that operate internationally. BIG, founded by Bjarke Ingels, now has offices in New York, Copenhagen, London, Barcelona, and Shenzhen, with varying infection rates – plus legal and cultural differences – complicating efforts to establish firm-wide policies. In New York, starting in July, we “encouraged people to come into the office three days a week, and work the other two from home,” says Bergmann. But that isn’t mandatory. "Someone might have an immune-compromised relative or an unvaccinated child at home. We have to adapt and accommodate people’s needs."

Bergmann says the firm opened the Shenzhen office during the pandemic. “We have a lot of work in China and since we couldn’t travel there, we decided we should have people on the ground," he says. And there, no one seems to mind coming to the office. After all the testing and quarantining in China, Bergmann says, "life there is pretty much back to normal.”