Facing the open Atlantic just west of Lisbon, the village of Cascais is known for its beaches and for a busy marina that hosts major sailing events, including, in 2011, the America’s Cup World Series. But, however popular it is with visitors, Cascais prides itself on its historic identity as a fishing village and maritime hub. Tiago Rebelo de Andrade, founder of Lisbon-based Subvert Studio, spent much of his childhood in Cascais, and, with Olympic sailors in his family, is keenly aware of that aspect of the area’s culture and history. He began looking at the village and started to consider how to bring its nautical heritage to contemporary architecture in 2015, when Subvert entered a competition to develop a piece of property at the town center that had been abandoned for nearly 15 years. The firm presented a proposal for residential development to compete against those for hotels. 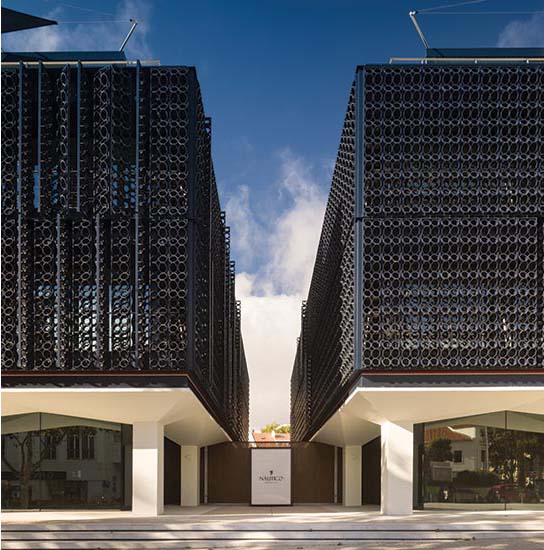 “We decided it would be best to build a housing project in Cascais because there aren’t many new ones,” says Andrade, adding that the process of gaining municipal approval for residential construction can take up to four years in the region, resulting in critical housing shortages in Lisbon and surrounding areas. When the Cascais mayor posted the hotel and residential proposals on social media, locals overwhelmingly supported a plan for creating an apartment building. “This happened because we created a great solution for the site. Our renderings showed a high commitment to the surroundings as well as a new identity for the block,” says Subvert project manager Marta Pinheiro de Almeida. While the apartments were to be developed as market-rate units, and many were likely to be purchased as vacation homes, the architects also hoped to create a neighborhood feeling for full- and part-time residents alike.

Once the commission was secured, the developers’ first question to the architects was whether the existing concrete building on the site could be reused. “It was not made for a residential project but for offices, and we spent a lot of time trying to prove that it was not as good,” says Andrade. While it was ultimately deemed unsuitable for adaptation, due to structural deterioration, Subvert’s initial work was based on the proportions of the office building, including its generous 11½-foot floor-to-floor dimensions, resulting in a happy outcome for the final project: “We were supposed to take advantage of the existing structure, so you have a huge ceiling height in all the apartments.”

Located near the train station that connects Cascais with Lisbon, the site had untapped potential as a welcoming gateway for visitors and residents. The architects proposed reducing the new building’s volume by 20 percent, compared with what had been there previously, to create more public space at its base. Now the set-back concrete and steel structure faces wide sidewalks, where pedestrians will be able to visit street-level stores and a restaurant with outdoor seating. Using the overhanging apartment floors above, the architects designed sheltered outdoor areas that they think of as a series of front porches. The commercial spaces and the three floors of apartments are split into two raised cubes, each with one corner shorn off, bisected by an entrance courtyard. There, native plants grow in beds of volcanic rock from the Azores, the mid-Atlantic Portuguese archipelago, “a reminder of the sailing achievements Portugal has made,’’ says Andrade. 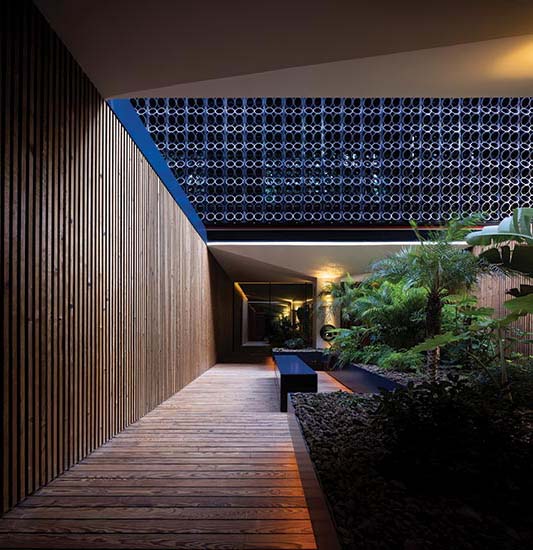 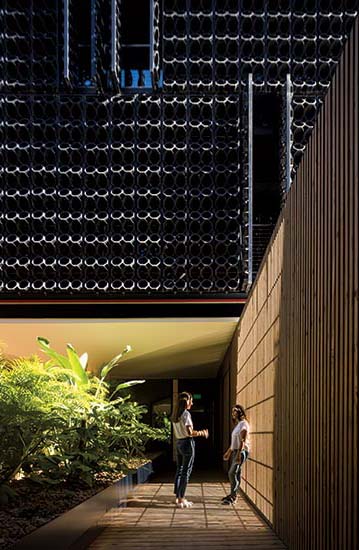 With Cascais’s heritage always in mind, the architects were inspired by sailing culture and the ocean. The vaults of the white-columned arcade at street level have a slightly peaked form modeled, the designers say, after the angle of a boat’s hull, and, perhaps most strikingly, the facade above was painstakingly prototyped to evoke, when light filters through it, the chopped surface of a windblown sea. More than 29,000 hexagonal ceramic pieces make up the building’s exterior skin; these elements are fastened to 856 frames, each 13 feet tall and approximately 20 inches wide, with top and bottom pivoting points to create operable screens. The components take their cues from cobogós, the lattice-like terra-cotta walls popular in modern Brazilian architecture that provide ventilation and privacy and modulate sunlight, explains Almeida. The hexagonal pieces were fabricated in nearby Caldas da Rainha and finished with deep blue glaze reminiscent of traditional blue Portuguese ceramics. From the interior, residents can open sliding glass doors and step onto private balconies to move the facade screens. Depending on the time of day and orientation, the screens cast an array of shifting shadows and light across nearby surfaces, indoors and out. 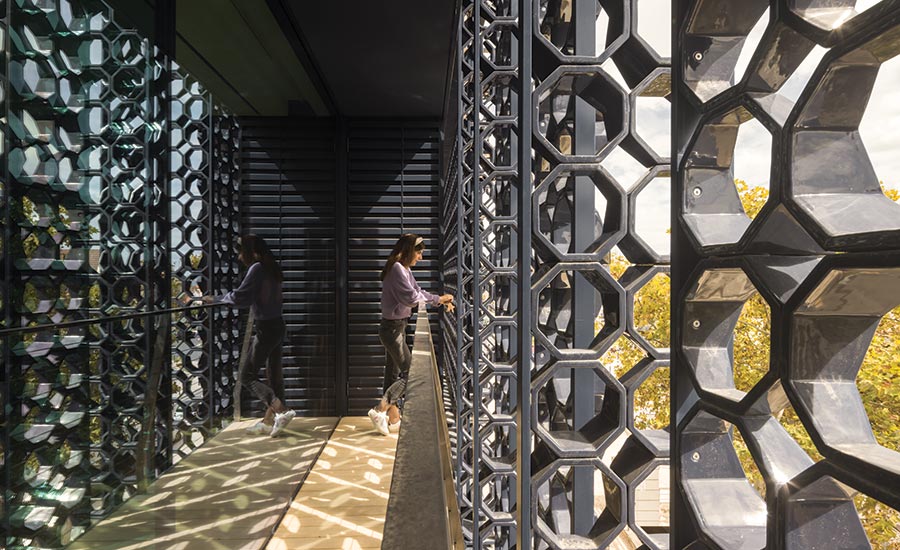 Pivoting ceramic screens (3) are glazed a deep blue, a hue that evokes the ocean and is repeated in a stairwell (4). Photos © Fernando Guerra 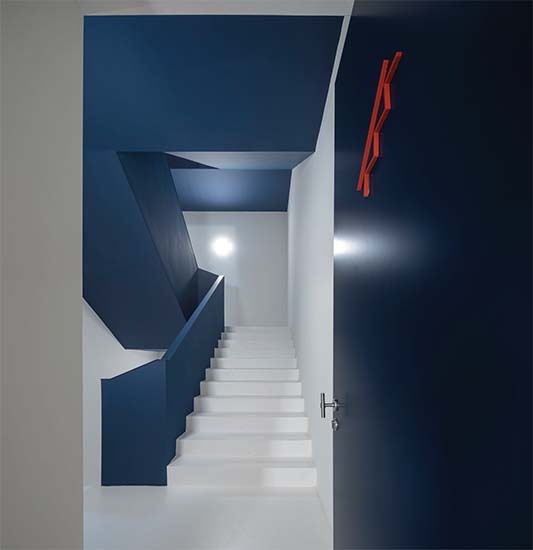 When designing the building’s two volumes, the architects created centralized stairs and elevators and grouped bathrooms and kitchens together to free exterior walls and corners for glazing, allowing more light into living spaces. Though Andrade points out that studio and one-bedroom apartments have been popular among developers worldwide for their profit potential, Subvert felt strongly that the building should appeal to families and ultimately convinced the clients to include a mix of unit sizes: eight studios, 16 two-bedroom apartments, and four three-bedroom apartments on the top floors. All of the units were purchased before completion of construction, according to the architects. 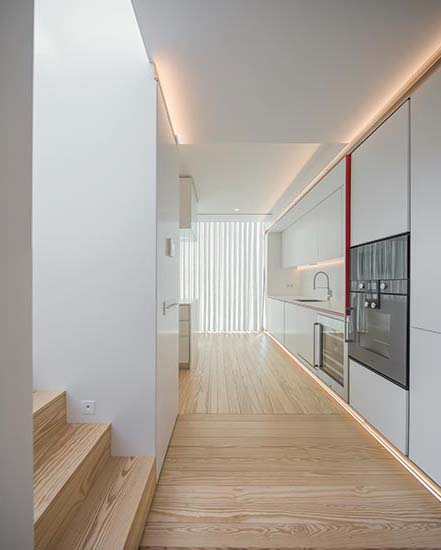 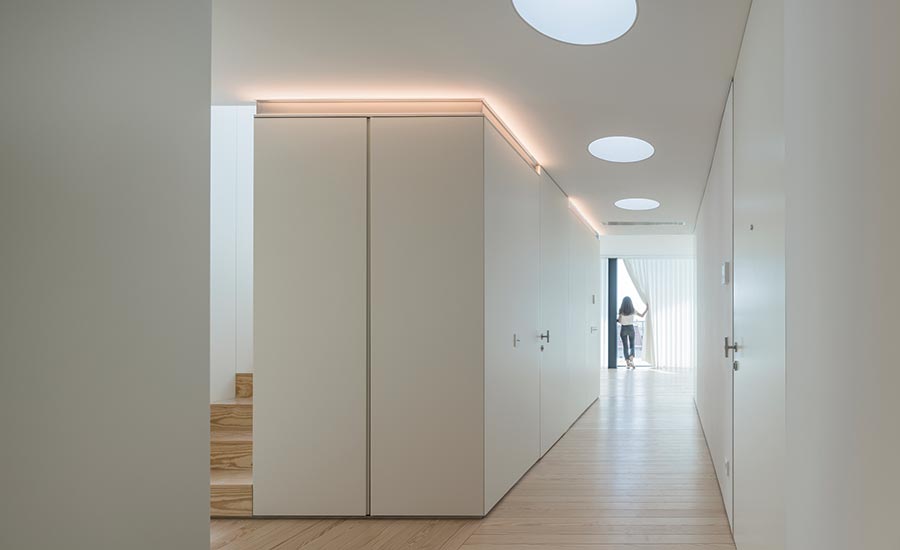 Inside, the units have pine floors and recessed lighting throughout (5 & 6). Photos © Fernando Guerra

“We tried to have a true sense of community here,” says Andrade. When residents exit elevators, they are greeted by pine floors and recessed lighting that continue into each apartment. “When you open the doors, the units will look like a part of one house,” he says. Because of the distance between the twin residential blocks’ being less than 20 feet, the facade panels can pivot closed for privacy or open for a community feeling. “It’s as if you’re living in Old Lisbon,” says Andrade. “If your neighbor needs salt, you can almost open your door and pass it.”