On the 20th anniversary of 9/11, the former site of terror and rubble is now a solemn epitaph for those who perished, but also a symbol of urban renewal. The 16-acre site owned by the Port Authority of New York and New Jersey, however, is no longer a crowded, dusty construction zone with road closures, trucks, and cranes, although a few architecture projects are still ongoing. In two decades, the area has transformed into a walkable downtown space featuring One World Trade, the tallest tower in the Western Hemisphere, and an eye-catching transportation and retail hub, the Oculus.

Although much of Studio Libeskind’s master plan has changed over the years, the basic idea—to create a memorial to the 9/11 tragedy and to reshape lower Manhattan into both a residential and commercial center—largely remains the same, according to Dara McQuillan, chief marketing and communications officer at Silverstein Properties, a major developer of the World Trade Center (WTC) site. 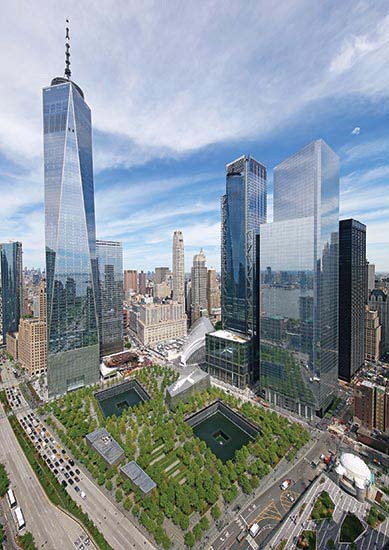 By 2006, the company finished constructing 7 WTC, a $700 million, 52-story building (designed by Skidmore, Owings & Merrill) that was the first office building in the city to be LEED Gold certified. On the 10th anniversary, the memorial park and reflection pools, by Michael Arad and Peter Walker of PWP Landscape Architecture, were built. Then came the $1.7 billion 4 WTC (Fumihiko Maki), the $3.9 billion Oculus (Santiago Calatrava), followed by Liberty Park (Joseph E. Brown, a landscape architect and former chief innovation officer at AECOM), the $2.7 billion 3 WTC (Rogers Stirk Harbour + Partners), and the memorial museum (Davis Brody Bond), with its glazed entry pavilion (Snøhetta).

Still to come is the St. Nicholas Greek Orthodox Church and National Shrine on the southern end of the WTC site, just beyond the memorial pools where the Twin Towers once stood. The 19th-century church on Cedar Street was the only religious structure that was destroyed during the terror attack, and its new $80 million shrine, also designed by Calatrava, is expected to open in April 2022.

Crews are currently finishing up the exterior of the church, which is inspired by Istanbul’s Hagia Sophia and the Church of the Holy Savior, and made with 3-millimeter-thick Pentelic marble fused between glass panels. Lights that sit between the panels and the concrete structure will illuminate the entire church and area, according to Michael Psaros, vice chairman of the Friends of St. Nicholas, the nonprofit in charge of fundraising and construction funding. “The shrine will glow, allowing light to take over the dark shadow of what was once Ground Zero,” he said. “It will be a cenotaph, a place that will allow people of all denominations to reflect on and remember what happened here.” 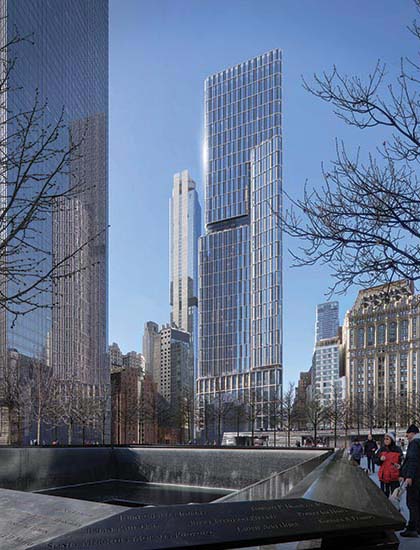 Directly behind the shrine, a mixed-use tower is planned for 5 WTC, developed by a partnership that includes Silverstein, Brookfield Properties, Omni New York, and Dabar Development Partners. The use of both glass and masonry in the 900-foot-tall tower, unveiled in February, will be the connector between the WTC complex and the Financial District, according to Robert Whitlock, design principal at Kohn Pedersen Fox, the building’s architect. The podium’s design is a contemporary take on the neighboring historic buildings to the east and south, and will have gray brick, white concrete, and metal facing. Meanwhile, the staggered towers of KPF’s building, with views of the harbor and city, will house over 1,300 apartments, 330 of which will be affordable housing.

Excavation will probably start in about two years for 5 WTC, or after all the necessary public-review processes conclude, according to Silverstein’s McQuillan. Construction costs are estimated at $1.2 billion, according to the Wall Street Journal.

Meanwhile, 2 WTC, to be designed by Norman Foster, will not proceed until an anchor tenant is found, McQuillan said. The already excavated lot currently holds the HVAC system for the Oculus, tucked behind a colorful graffitied metal wall.

A cultural highlight is the Ronald O. Perelman Performing Arts Center, under construction directly east of One World Trade. To be completed in 2023, the cubed, marble-faced structure will have three major auditoriums that can transform into 11 different configurations and help the city’s art world gravitate to Lower Manhattan, according to its designer, Joshua Ramus, founding principal of REX. The adjustments will allow patrons to experience a different building each time they visit, as the look and feel of the interior changes, Ramus said: “It’s like a mystery box, but simple—pure, individualistic, yet respectful.” The exterior will be elegant and sober (as it faces the memorial museum, park, and reflecting pools), made with veined marble laminated within insulated glass. As daylight pours through the translucent skin, it will illuminate the interior, highlighting the contrast to the materials used there, like concrete and wood. At night, the structure will have a golden glow, which will bookend the light from the nearly complete St. Nicholas shrine. 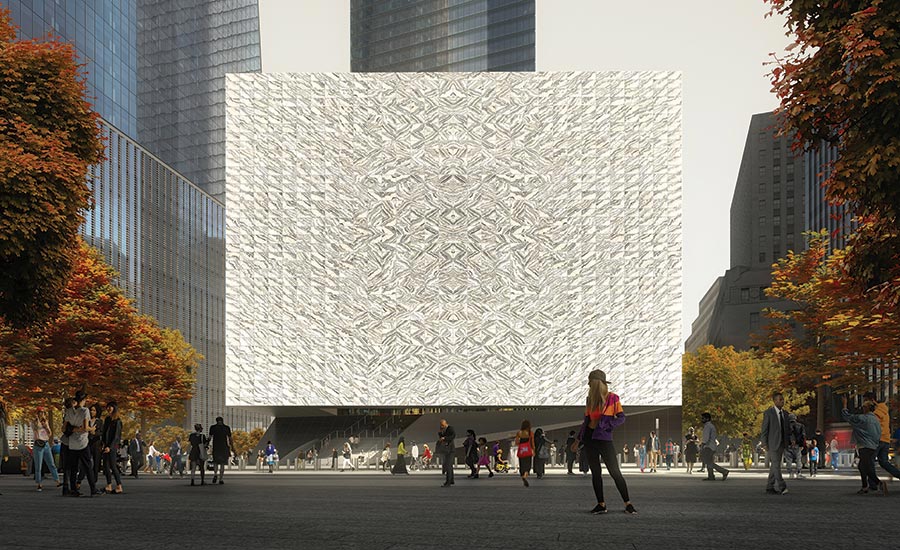 The pandemic, which brought on live-work reconfigurations for many New Yorkers, adds uncertainty to how the current, and future, office spaces across the towers of the World Trade Center will be inhabited. But for now, the complex feels as if it is just gaining a footing as part of a new downtown landscape, not yet sure of its identity. Currently a tourist magnet, it will probably take at least another decade before the area truly becomes a seamless, vibrant part of the city.

Documenting two decades of the rescue, recovery and rebuilding at the World Trade Center site

Kaya Laterman is a freelance reporter based in New York City, and a regular contributor to the Metropolitan and Real Estate sections of the New York Times.