During the inaugural weekend of its veiling, September 18 and 19, Christo and Jeanne-Claude’s L’Arc de Triomphe, Wrapped attracted teeming crowds in Paris who flocked to the Place de l’Étoile, at one end of the Champs-Élysées, which was open only to pedestrians and will be car-free every weekend until unwrapping begins, on October 4. Fifty-nine years after he first drew up the concept, in 1962, this is a posthumous triumph for Christo Vladimirov Javacheff (1935–2020) and his wife and partner in crime, Jeanne-Claude Denat de Guillebon (1935–2009), realized by the artists’ estate under the direction of their nephew, Vladimir Yavachev.

The world’s largest triumphal arch has been dissimulated under 270,000 square feet of recyclable powdered-aluminum-coated polypropylene fabric that has been dressed with 9,850 feet of red polypropylene rope to give the illusion that it has been tied up like a shimmering parcel waiting to be mailed. “The particular challenge with any Christo project is that it’s always a first time,” Vince Davenport, an engineering consultant who worked with the Christos for 35 years, told The Guardian. “It’s never been done before and it will never be done again.”

German engineering firm Schlaich Bergermann Partner, who had already worked with Christo on his 2018 The London Mastaba, was hired to design the fixing structures that give the wrapping its form, creating a precise 3D digital model of the Arc de Triomphe to do so and testing their ideas on a 1:2-scale partial physical mock-up. To protect the sculpted parts of the Arc, steel-truss structures have been mounted in front of them (work began in mid-July), while wooden boxes anchor the prestressed cables that encircle the building and secure the fabric against wind loads (among the challenges was keeping the number of holes drilled into the Arc’s historic stonework to a minimum). Up on the roof, a grid of cantilevered beams has been installed from which the textile is suspended: 70 abseilers were required to unroll the swathes of fabric, the largest of which are 26 feet wide and weigh around a ton. 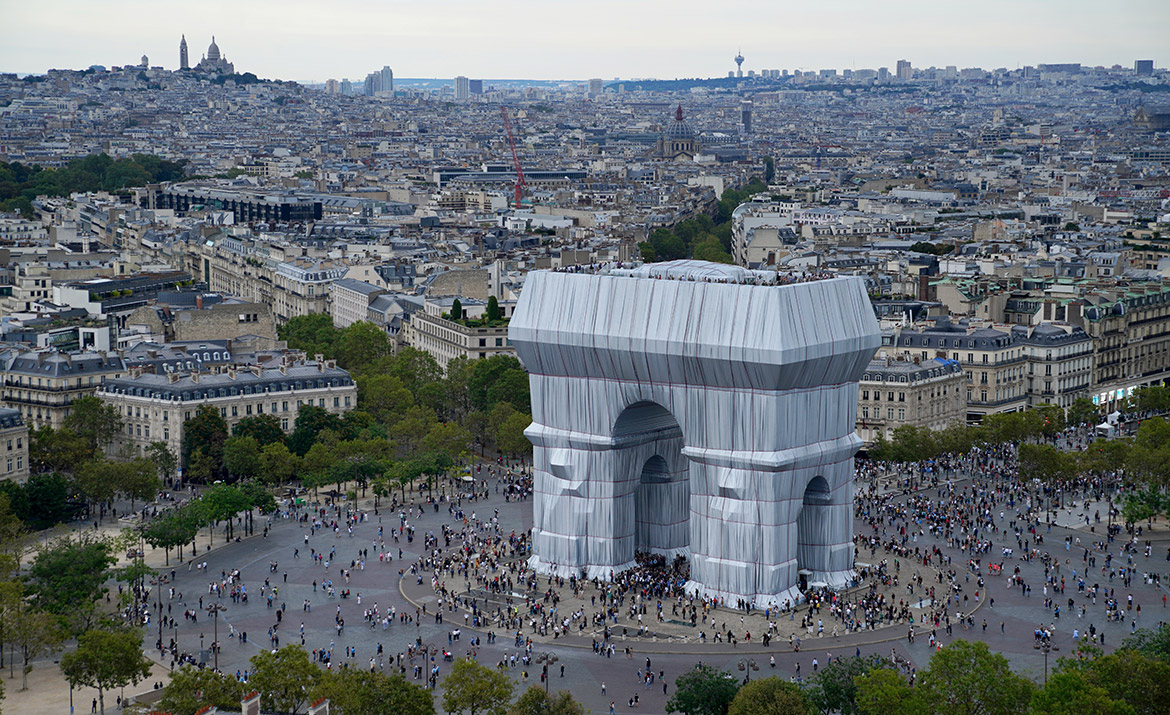 Official reactions were positive—unsurprisingly given the ease with which the project seems to have sailed through the planning process after the Centre Pompidou first proposed it in 2017. Clearly, for today’s generation of French politicians, there is no longer any doubt that the Christos’ modus operandi is art, something that former culture minister Jack Lang—who was instrumental in the Christos’ wrapping of the Pont Neuf in 1985—discussed with French weekly Le Point: “I think that mentalities in France have changed. The work we began back then in favor of contemporary art has, I believe, come to fruition. There are fewer ideological tensions.”

Inaugurating the wrapping, French president Emmanuel Macron hailed Yavachev for making “a crazy dream” come true; the mayor of Paris, Anne Hidalgo, thanked “this couple whose works will remain among the most striking of our times”; while culture minister Roselyne Bachelot described “this monumental gesture as a call for freedom… a fantastic present to Parisians, to the French, and to art lovers everywhere.”

There were, however, dissenters. An old friend of Christo’s, Italian architect Carlo Ratti, called for the wrapping to be halted in an opinion piece in Le Monde, lamenting the signal it sent out in a world where the fashion and textile industries put enormous strain on water supplies; in Le Figaro, philosopher Benjamin Olivennes called the work “dated” and “has-been”; while far-right politician Florian Philippot dismissed the wrapping as a “monstrosity! A trash bag around one of our most glorious monuments!”—a dig not only at contemporary art but also at presidential candidate Hidalgo, who has been widely criticized in her role as mayor for letting Paris become dirty and unkempt.

“I never thought it would ever happen,” Christo said of L’Arc de Triomphe, Wrapped before his death last year, from an exclusive interview with RECORD. “But I want you to know that many of these projects can be built without me. Everything is already written.” Which is to say this may not be the last Christo work the world will see, as over 40 projects for which he and Jeanne-Claude never obtained permission are waiting in the archives.