On Wrapping the Arc de Triomphe

Known for their signature transformations of monuments and landscapes, from the Pont Neuf, Wrapped (Paris, 1985) and the Reichstag, Wrapped (Berlin, 1995) to The Gates in Central Park (New York, 2005), Christo and Jeanne-Claude attracted millions of visitors to see their free two-week installations around the world. Each of their urban projects encouraged a different way of viewing a monument or a public space, transforming historic architecture into contemporary art. What is probably their last work, L’ Arc de Tri­omphe, Wrapped, was delayed for one year after Christo’s death on May 31, 2020, and because of Covid—yet, of their projects, it was one of the longest in gestation. It will be open from September 18 to October 3.

At the juncture of 12 major avenues in Paris, including the Champs-Élysées, the Arc de Tri­omphe was commissioned in 1806 to celebrate Napoleon’s victory at the Battle of Austerlitz the previous year, and it finally opened in 1836 (long after the emperor’s final defeat at Waterloo and his death in 1821). Designed by the architect Jean-François-Thérèse Chalgrin (1739–1811), the Arc is 164 feet high and 148 feet wide, and has hosted at its base the tomb of the unknown soldier, marked by an eternal flame, since 1923.

Like all the projects of Christo (1935–2020) and his wife and partner, Jeanne-Claude (1935–2009), L’Arc de Triomphe, Wrapped is the result of years of meticulous administrative and technical planning. The structure will be encased in 269,098 square feet of silvery blue recyclable polypropylene fabric, and 9,843 feet of red rope. The artwork is entirely funded by the sale of Christo’s preparatory studies, drawings, collages, and scale models, with no direct public support involved. Both artists made clear their intention for their work to be carried forward even after their deaths, and, in this case, their original team is directed by Christo’s nephew Vladimir Yavachev.

Philip Jodidio, who knew Christo and Jeanne-Claude for many years, met Christo for the last time at his Howard Street studio in New York on June 11, 2019. During their conversation, they spoke about L’Arc de Triomphe, Wrapped, which had just won final approval. Here is an excerpt. 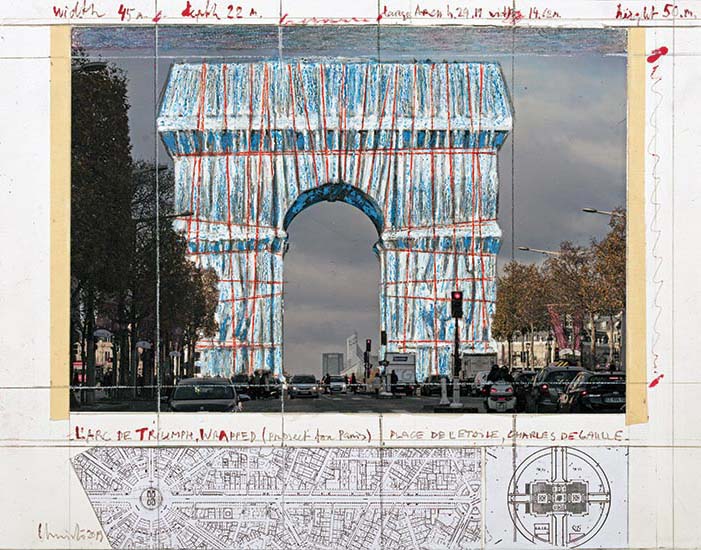 A preparatory drawing for the project. Photo André Grossmann © 2019 Christo and Jeanne-Claude Foundation, click to enlarge.

When did you first become interested in the Arc de Triomphe?

In 1958, when I arrived in Paris [from his native Bulgaria], I lived in a maid’s room on the top floor of 8 rue Quentin Bauchart, adjacent to the Champs-Élysées. That is how I discovered the Arc de Triomphe in March of that year. In 1962, we did a photomontage with a photo by Shunk-Kender, looking up the Avenue Foch toward the Arc de Triomphe, in which we imagined wrapping the structure (Wrapped Public Building—Project for Arc de Triomphe, Paris). In 1972, Jacques Putman, the husband of the decorator Andrée Putman, published a color lithograph of the original project. In 1989, Torsten Lilja in Stockholm printed another more detailed lithograph. For the Reichstag project, which took 25 years, I created more than 600 original works, but in the case of the Arc de Triomphe, I thought we would never get the permission. As a result, I created fewer works, but the original idea dates back to 1962.

How did you finally obtain permission to create L’Arc de Triomphe, Wrapped?

In the last 50 years, we have realized 22 projects and we failed to get permission for 47 others, although we continue our efforts. Bernard Blistène [then Director of the Musée national d’Art moderne at the Centre Pompidou] was interested in an exhibition on our work. Each of our major projects, starting with Wrapped Coast [Australia, 1968–69], has had its own exhibition, with full documentation, models, artworks, and films. Before Jeanne-Claude passed away in 2009, because we were aging and we are not forever, we sold a full documentary exhibition on the Running Fence [Sonoma and Marin counties, Califor­nia, 1972–76] to the Smithsonian American Art Museum in Washington, D.C. Later we worked very hard to sell the exhibition on the Wrapped Reichstag to a German foundation that has lent it for 20 years to the Reichstag [Christo and Jeanne-Claude: Wrapped Reich­stag, Berlin, 1971–95. A Documentation Exhi­bition, 2015–35]. Our exhibition on the Pont Neuf Wrapped [1975–85], in which we tried to articulate its similarity as an urban project to the Reichstag, was held at the Kunstmuseum in Bonn in 1993. It was shown again in 2004 at the Portland Art Museum in Oregon before The Gates project. But it was never shown in France, and our idea was that every exhibition should find a permanent home in its own country. And so, at our request, Bernard Blistène accepted the Pont Neuf exhibition for the Centre Pompidou, and he decided to add an extra section with the working title “Christo and Jeanne-Claude—Parisian Years,” about our works between 1958 and 1964.

It was the exhibition on the Pont Neuf at the Centre Pompidou, then, that made L’Arc de Triomphe, Wrapped possible?

That is correct. Not so long ago, I was leaving the Centre Pompidou with Bernard and Serge Lasvigne, the president of the Centre, after a meeting. Looking at the spaces in front of the Centre—the esplanade, and the Brancusi Studio—Bernard said to me that usually artists who show at the Centre create a work nearby. I immediately responded that I would not do something there, but that I would wrap the Arc de Triomphe. They took me seriously, and, with their help—within less than a year—we had the necessary permission for the Arc de Triomphe.

Even after you obtained permission, there were obstacles to the timing.

Yes. The original idea was to have the Centre Pompidou exhibition coincide with the Arc de Triomphe, Wrapped, but other factors intervened. The LPO [Ligue pour la Protection des Oiseaux], which is a very active association for the protection of birds in France, heard about the project and approached us because there were falcons nesting in the bas-relief sculptures on the north facade of the Arc. This fact, combined with the frequent use of the Arc de Triomphe for official functions, often around the eternal flame, led to a delay in the schedule. The space is, in fact, not under the control of the City of Paris but that of the National Monuments and the Presidency of France. Because of the birds and because of the official use, the project is planned to last from the 19th of September until October 4, 2020 [the original planned date, delayed one year]. This morning, we received final approval from Philippe Bélaval, the president of the Centre des Monuments Nationaux, who was instrumental in convincing President Macron to allow the project to advance.

One of your strengths is clearly your consistency over long periods of time.

This is the story about how a long, unrealized project came to fruition on a very rapid schedule. We also try to continue to work with people and organizations in the long term. For L’Arc de Triomphe, Wrapped, we are very fortunate, because the company that realized the Pont Neuf Wrapped, the Char­pentiers de Paris, is very enthusiastic about working with us again. The Compagnie des Guides de Chamonix, mountain climbers who were with us in 1985, are again involved.

What are some of the reasons you have been interested in the Arc de Triomphe?

The Arc de Triomphe is the most visited national monument of France [9.9 million visitors in 2019], and visits will continue during the project. At the top [viewing] platform, visitors will be able to walk on the fabric that will cover the structure. I was interested to learn that an ephemeral full-scale wood and painted-canvas mock-up of the Arc was built on the site in 1810, when the structure was under construction. It has been the theater of major events such as the funeral of the writer Victor Hugo, when it was partially shrouded in black while the body was displayed there for one night in May 1885. General De Gaulle marched from the Arc down the Champs-Élysées on August 25, 1944, marking the liberation of the city. Physically and historically, it is a significant monument.

Our Lady of the Conception Chapel

Our Lady of the Conception Chapel Project Portfolio

Interview with Frank Gehry on a Milestone Birthday

Interview with Reinier de Graaf on 'Four Walls and a Roof'