How can new development acquire the eclectic character of cities that grow in a piecemeal way over time? That’s the question asked by the creators of the Design District, a studio complex for the creative industries in south-east London, which opened for business on September 15th. Their response was to appoint eight architects to design a cluster of 16 buildings – two apiece – and instruct them to work in isolation, without reference to each other. The aim was to foster variety, avoid compromise and allow for the operation of serendipity. The result is an exuberant jumble of eccentric structures which bursts with ideas but avoids collapsing into chaos thanks to a rigorous masterplan by architect HNNA. 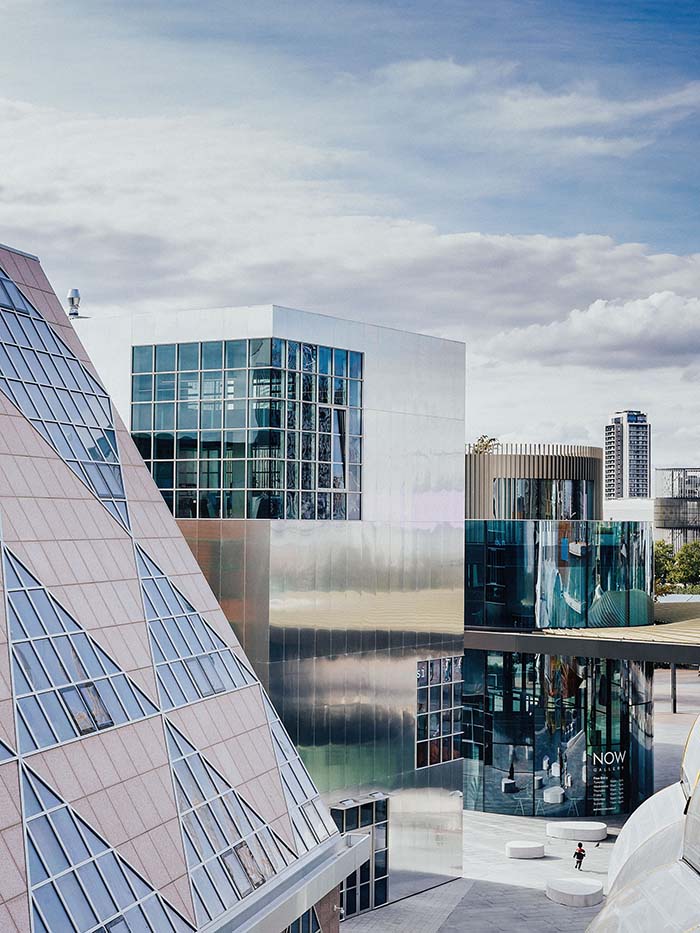 The new complex includes distinct structures such as those by firms 6a architects (left) and Barozzi Veiga (center). Photo © Taran Wilkhu 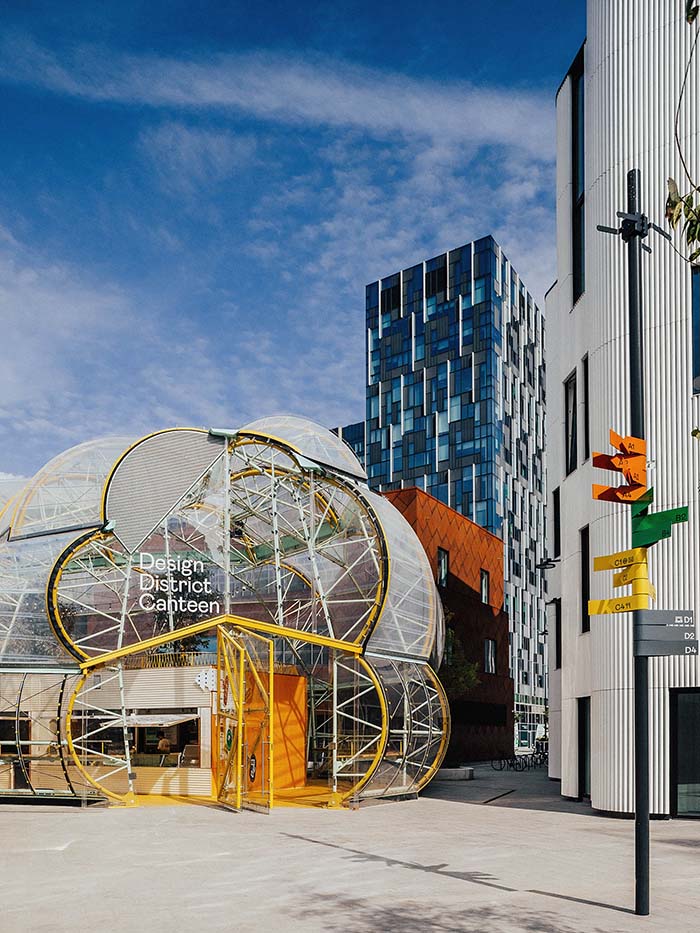 A translucent food hall by SelgasCano snakes through the heart of Design District, bordered by HNNA’s curving, ribbed-concrete Bureau workspace/members club (right) on its south side and a weathering-steel structure outfitted with a test kitchen and studios by Mole Architects to its east. Photo © Taran Wilkhu

The district provides workspace for 1,800 people in studios ranging from 200 to 10,000 square feet, but also plays an important role as a catalyst for urban regeneration. It sits in the middle of Greenwich Peninsula, a 200-acre industrial site bounded by a loop of the River Thames, whose slow transformation began with Richard Rogers’ yellow-masted Millennium Dome in 1999. When developer Knight Dragon acquired the land and conceived a plan for 17,500 apartments in a forest of towers, it wanted a ‘beating heart’ that would give a distinctive identity to the place. HNNA proposed a permanent, low-cost home for creatives whose presence often makes neighborhoods desirable, but who are displaced as prices rise. It’s a popular idea: even before it was complete, the developer had let three-quarters of the space.

Covering an area the size of two standard city blocks, the low-rise, close-packed buildings are arranged at odd angles, framing an intricate network of alleys and small courtyards. The roughly rectangular structures are compact enough to be naturally lit and ventilated and are served by a single core. “They are very efficient – like simple Lego blocks which we have manipulated to create an interesting hierarchy of public spaces,” says HNNA director Hannah Corlett. 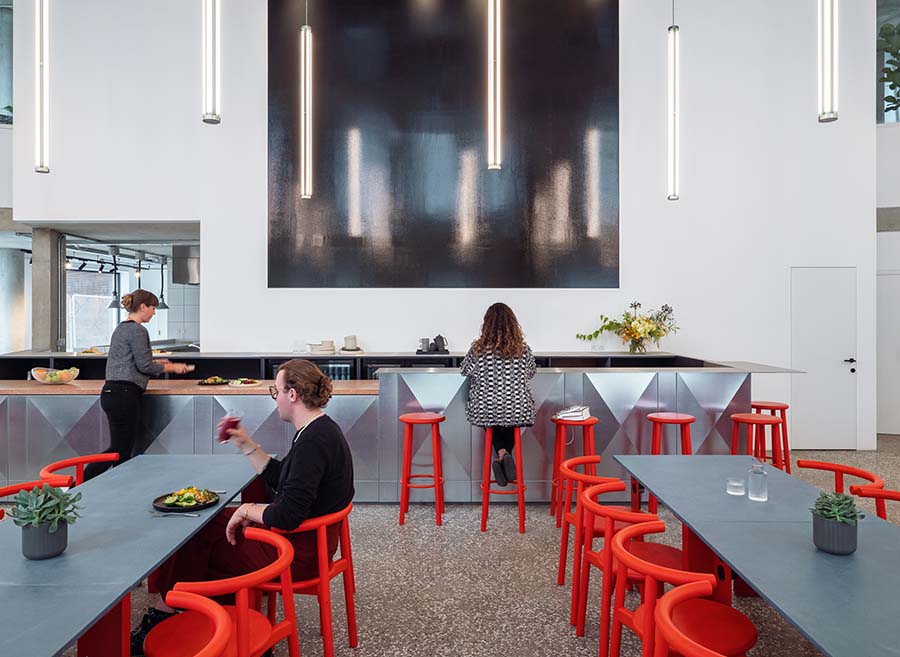 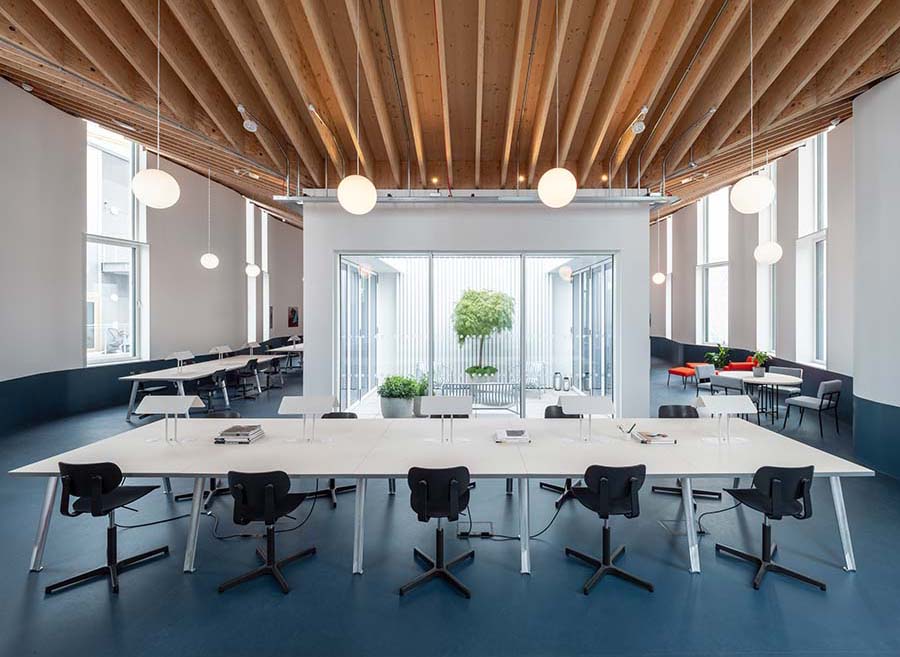 HNNA’s co-working space for Bureau includes interiors by Roz Barr Architects with comfortable areas for both collaborative and private efforts as well as room for socializing and relaxation. Photos © Alex Upton, click to enlarge.

Follow one of the winding routes towards the large central courtyard and everything outside the district vanishes from sight. “It gives an enjoyable sense of being lost without actually being lost,” says Corlett. Look in any direction and multifarious structures either clash or “half-rhyme” in ways the designers couldn’t predict. The poured-in-place concrete facades of weighty buildings by Adam Khan contrast with SelgasCano’s plant-filled food hall or canteen, whose curved steel ribs and clear plastic wrap appear to have the lightness of soap bubbles. Mole Architects’ rusty ziggurat hints at industrial history, while the polished-aluminum skin of Barozzi Veiga’s contribution shimmers with reflections of red brick, pink stone, and green metal.

This architectural smorgasbord competes for attention with views into ground-floor workshops, and through the buildings to busy courtyards beyond. “We’ve minimized dead space – empty couches and bored-looking receptionists – so visitors can see people physically making things,” says Corlett. Space for desks is provided on the middle stories, while the light-filled top floors would suit painters and photographers. This arrangement formed part of an architectural brief so minimal that it was mostly numeric: cost, height, and a ratio of internal area to envelope that allowed flexibility with form. There were no instructions on structure or materials. “We set parameters without limiting the ability to play and be innovative,” says Corlett. 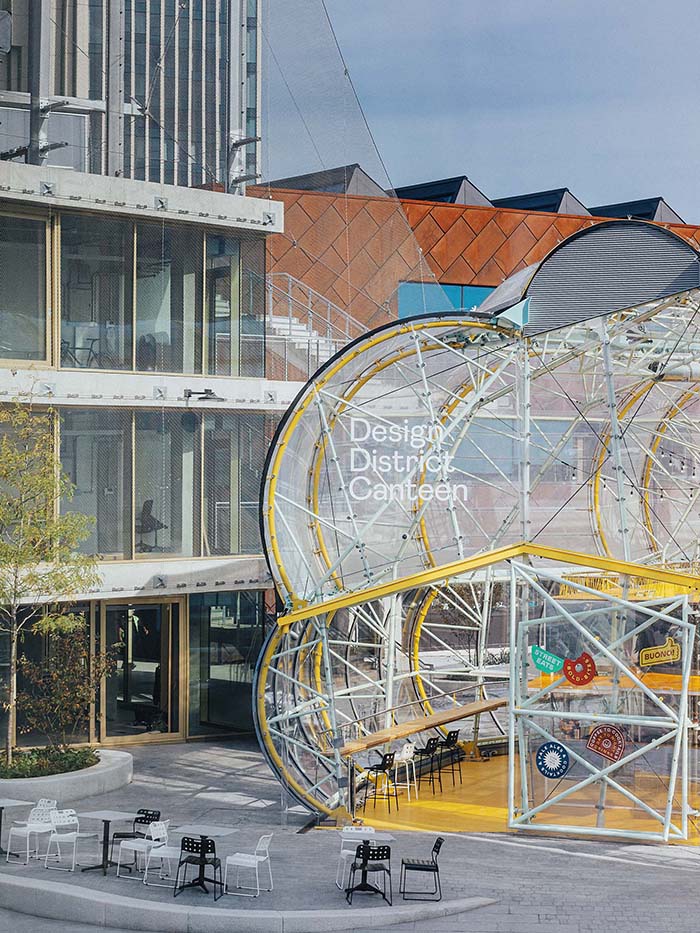 As a consequence, every firm focused on something different. Architecture 00 looked for added value, shifting circulation onto external decks that double as additional workspace and installing a rooftop basketball court. Concrete and steel frames sheathed in wire mesh have a raw appearance that evokes the potential of buildings under construction. HNNA’s two buildings exploit the rare opportunity to make deep facades that play with light and shadow – one with wavy walls of ribbed concrete, the other with rippling perforated metal. And 6a Architects explored the layered assembly of generic building products that typifies the construction of commercial sheds. “That led to conversations about unusual precision in the use of vernacular materials and artist Richard Artschwager,” says 6a director Stephanie Macdonald. Artschwager’s graphic sculptures inspired a harlequin pattern of glass and stone cladding. The studios’ wedge form was generated by following the spirit of the parametric brief. “Simply tilting the facade until we reached the prescribed volume gave us something interesting”.

Working blind, architects had to rethink their approach to context. Architect David Kohn’s buildings have an ambiguity suggested by a place in transition. “How can I provide a sense of belonging in a new part of a changing city? By making a hybrid building that invites multiple interpretations and has some humor about it”. His two studios are on the district’s western edge, visible from a distance. Giant cylindrical columns and a gridded facade play games of scale, raising doubts about the buildings’ true size. Kohn also drew inspiration from antecedents of the Design District such as the Venetian headquarters of trade guilds, whose use of iconography is reinterpreted in niches for figurative sculpture and an oversized illuminated sign. 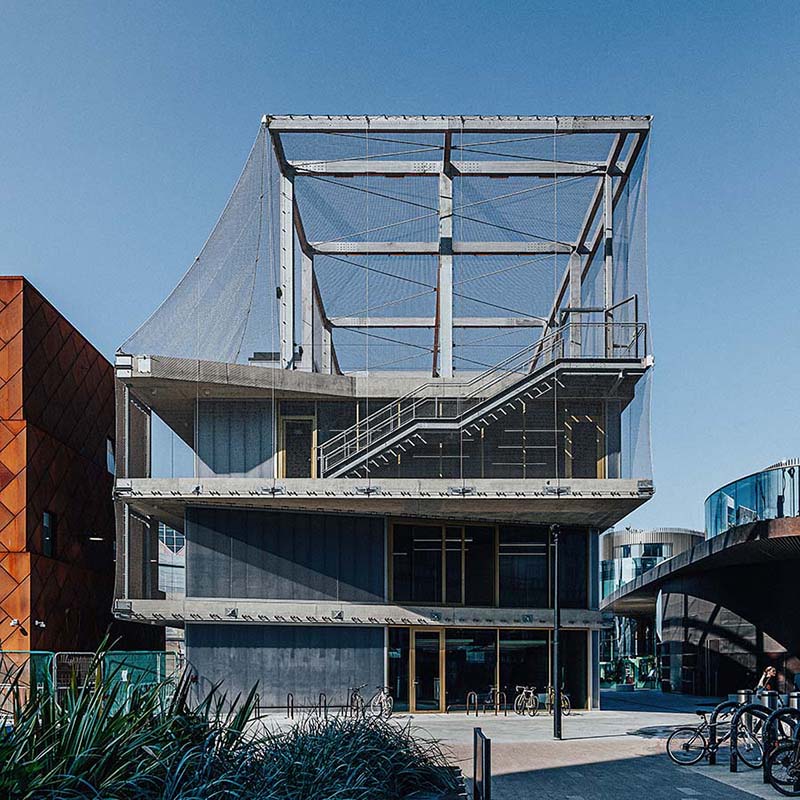 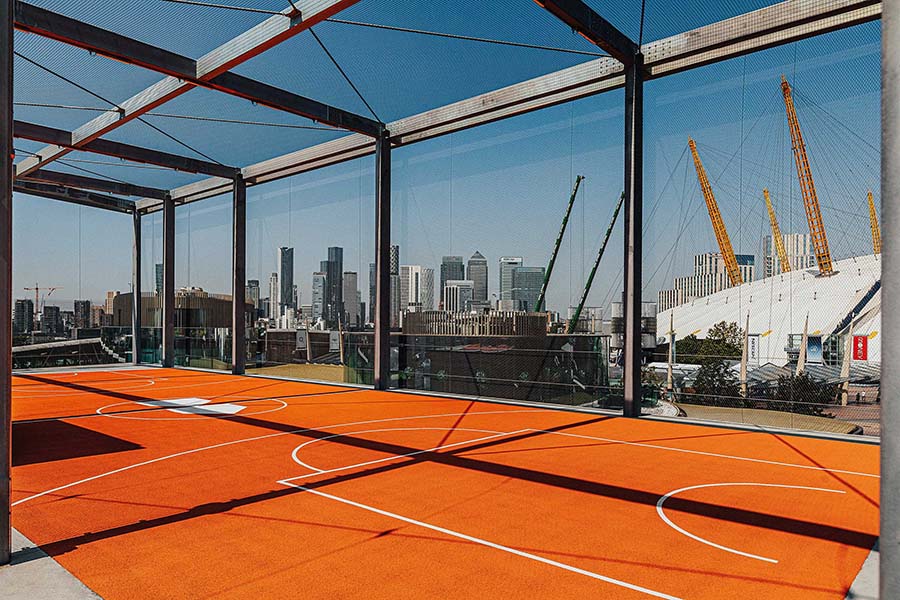 Such characterful buildings produce strong reactions, both positive and negative – something the district’s creators actively sought. “No-one should like all of them because that would imply a homogeneity of taste,” says Corlett. “This is the antithesis of masterplans that are policed to ensure bland coherence”. Likewise, the team was aware that the experimental approach carried risk: “We expected suggestions that it’s like an ‘expo,’ but had confidence that good architects would do something interesting, and the rational framework and public realm hold it all together.” With most large-scale urban developments characterized by caution, it is refreshing to see one take a gamble - and even better that it has paid off. 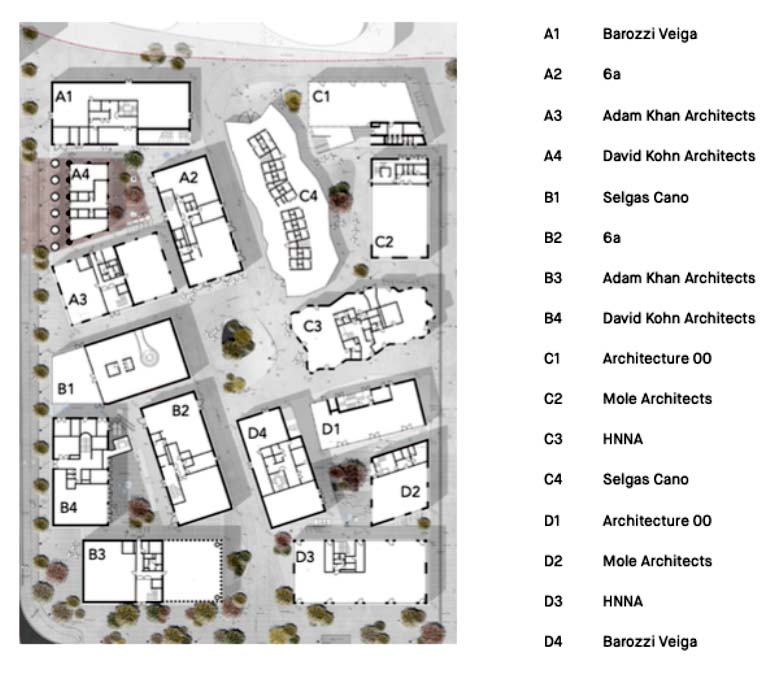