The former West London home of Charles Jencks, critic, land artist, and patron of architecture, has been converted into a museum and is now open to the public. Jencks, who was born in Baltimore in 1939 and died in London in 2019, provided for the transition before he died, creating plans for how his basement and garage could be converted into a gallery. Little else has been touched in this maximalist, encyclopedic building however. 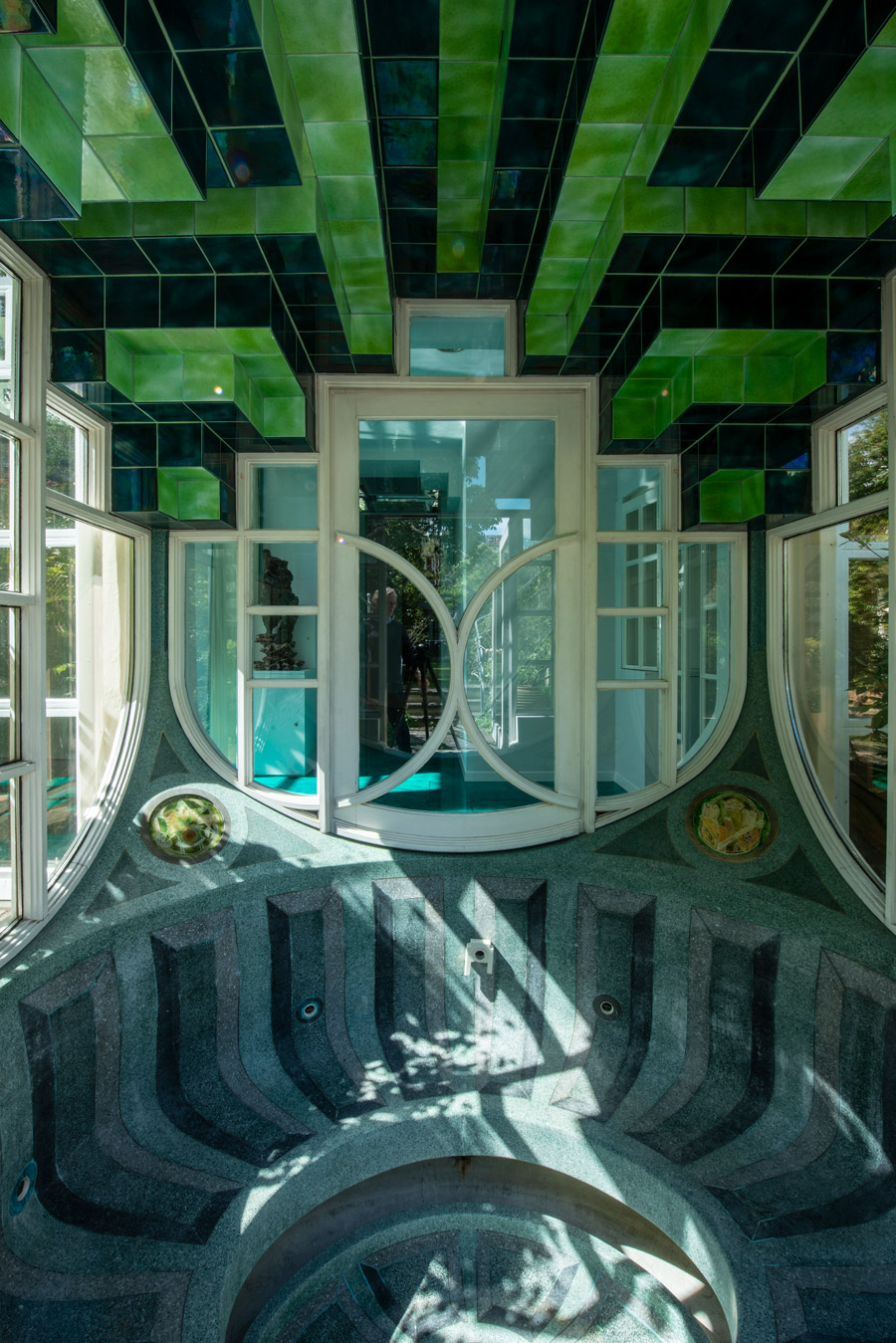 A feature of The Cosmic House is The Dome of Water is a jacuzzi designed by Piers Gough. Photo © Sue Barr 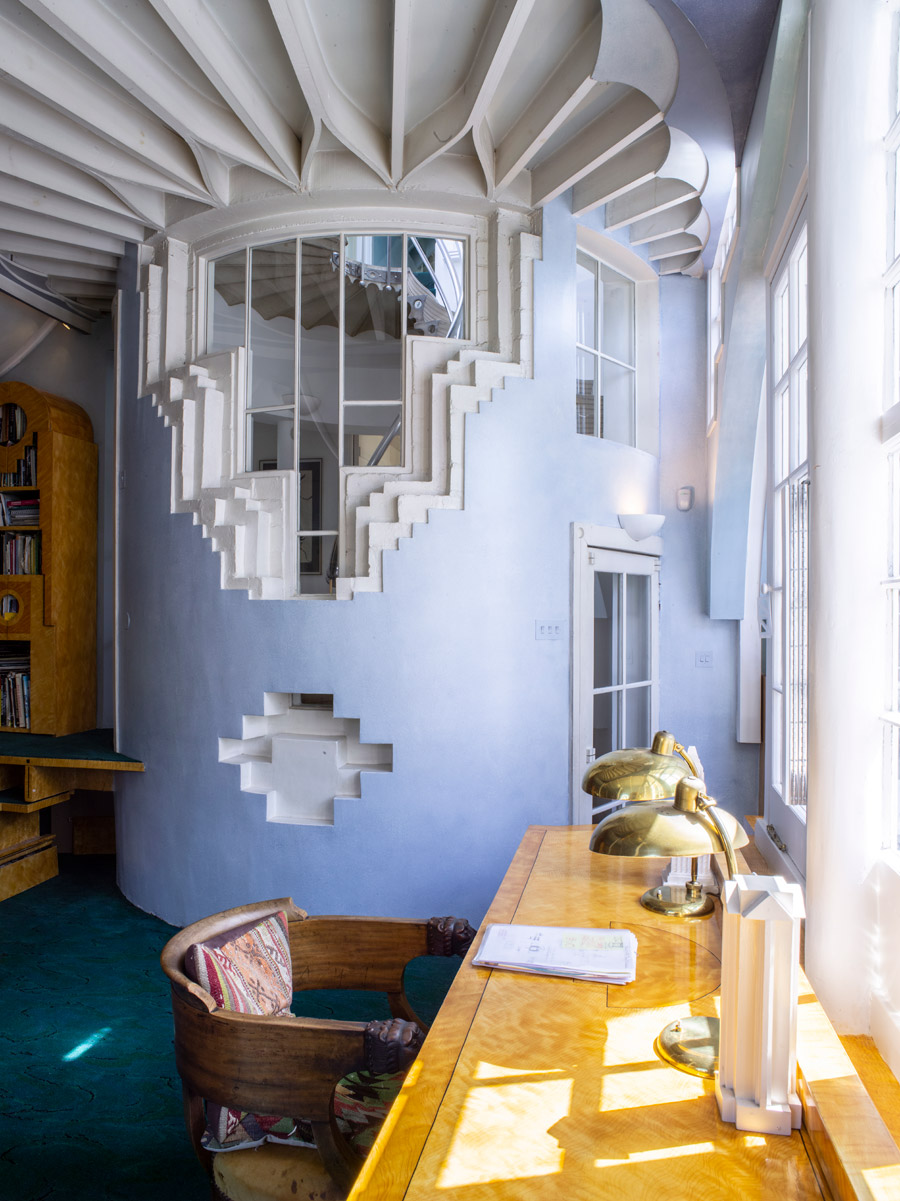 The Cosmic House's Architectural Library is entered from the Solar Stair and has a ceiling design expressed as sun rays. Photo © Sue Barr

Less than two years after Jencks’s death, visitors are now able to experience one of the great interiors of the post-modernist movement. Vibrantly colored and full of elaborate details, the house is also an occasionally overwhelming lesson in the importance of symbolism in architecture.

Speaking at the launch of what Jencks himself called The Cosmic House, his daughter Lily, who is director of the Charles Jencks Foundation that runs the house museum and gallery, said of the place she grew up in: “It doesn’t seem strange that the house is now a museum. It was always public and my father used it as a teaching tool. He had crowds of people visiting and he would take them around obsessively, explaining the significance of each part. It would be stranger, in fact, if it was closed.” 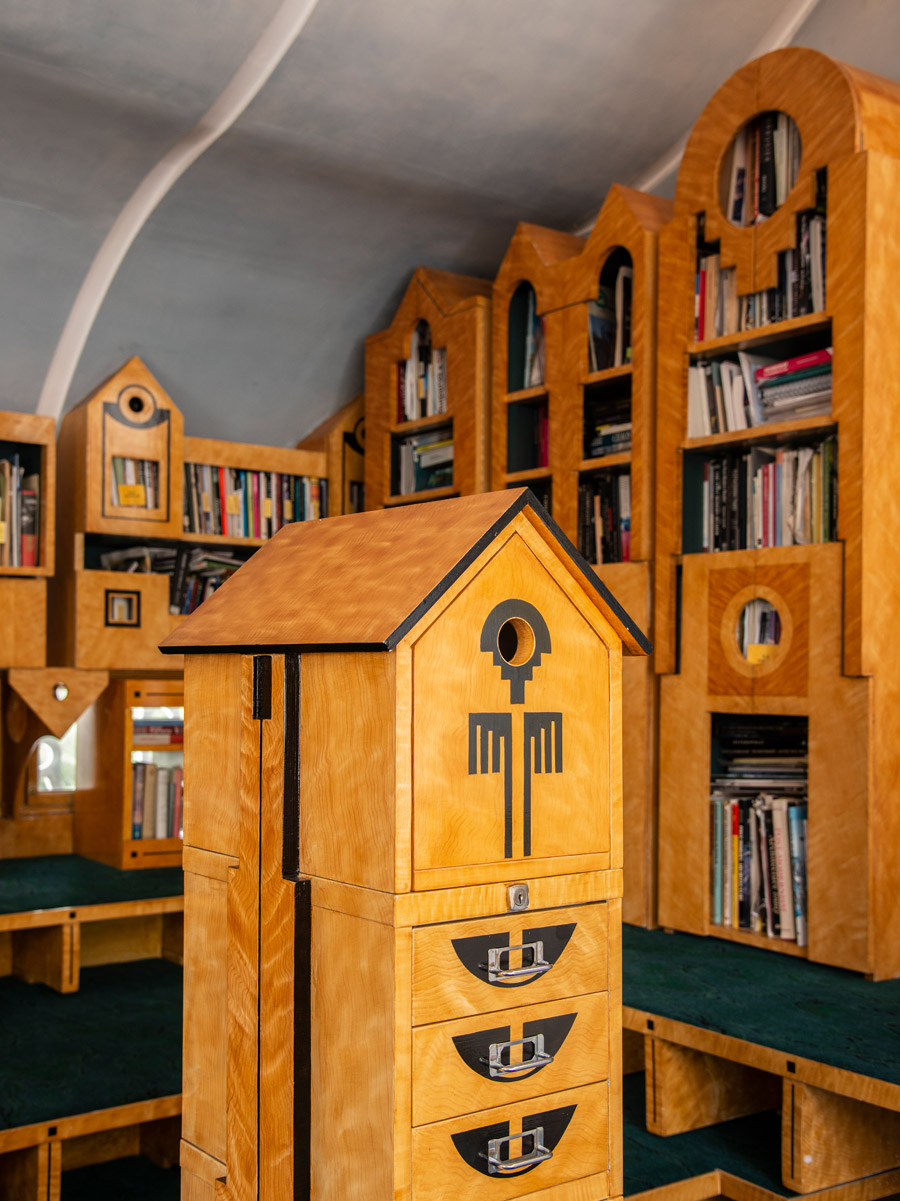 The Architectural Library with the slide-scraper in the foreground, an ad-hoc combination of off-the-shelf filing cabinets with painted MDF ornamentation. Photo © Sue Barr

American-born Jencks moved into the Victorian house in West London’s Holland Park district in 1978 and employed English architect Sir Terry Farrell to alter the envelope of the building and insert a 52-stepped spiral staircase into the conventional plan. This concrete insertion rises from a mosaic by the Italian Scottish sculptor Eduardo Paolozzi and spirals upwards to a circular skylight at the top of the house, symbolizing the earth’s journey around the sun.

The house is organized physically around this stair and metaphorically around Jencks’s unique cosmology, with rooms on the ground floor representing the seasons in extravagant fashion. The Winter room boasts a fireplace by Michael Graves, as does the Spring Room, which is crowned by a recessed lemon-yellow conversation pit with sundial facing the garden. The Egypt Room is painted a deep lilac color. Significances lie in the smallest details. A small mezzanine between the second and third floors joins the spiral staircase on the 21st step, thereby commemorating Jencks’s birthday on June 21 and midsummer. 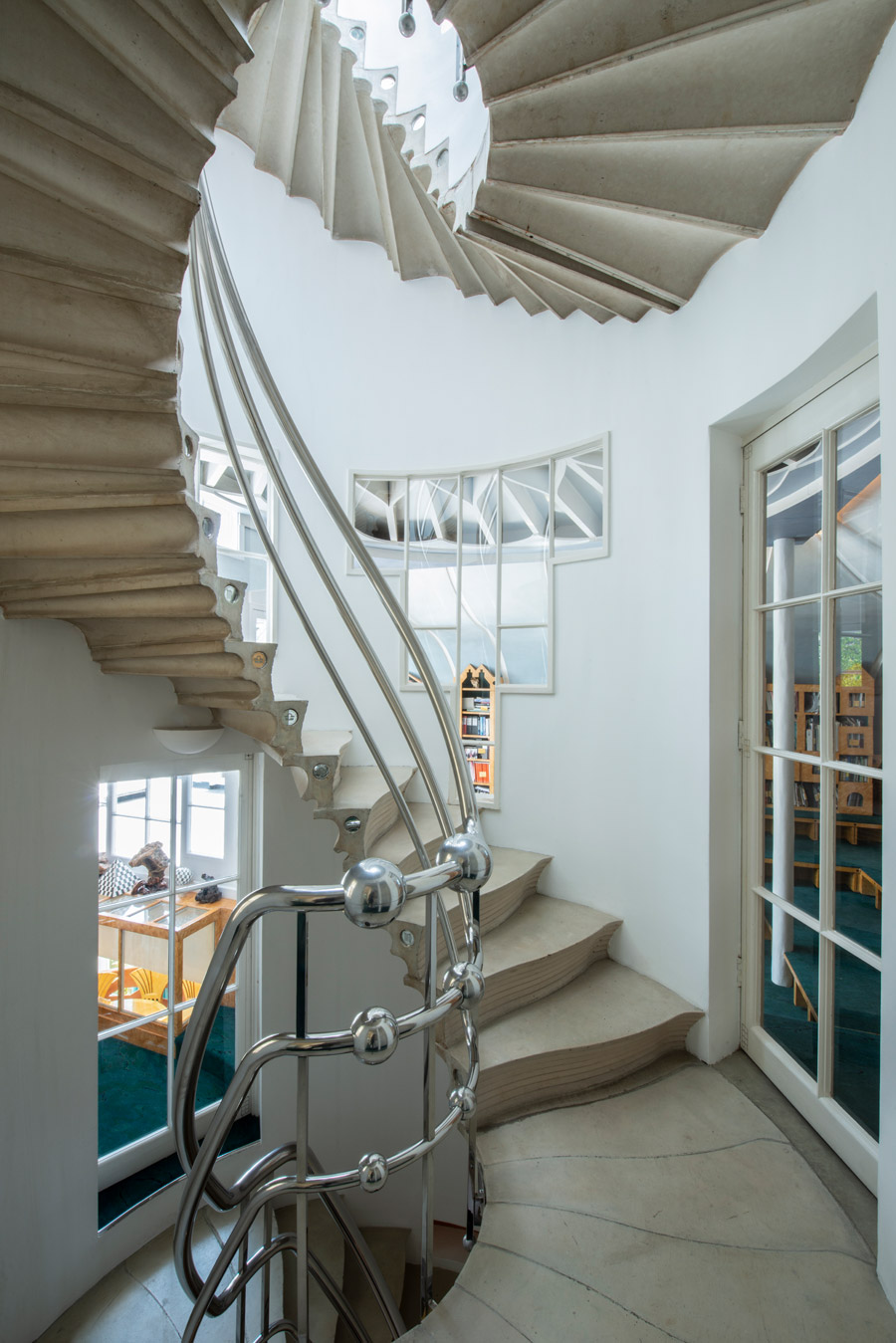 The Solar Stair is a cantilevered concrete spiral in the centre of the building, with Eduardo Paolozzi’s Black Hole mosaic at the base. Photo © Sue Barr 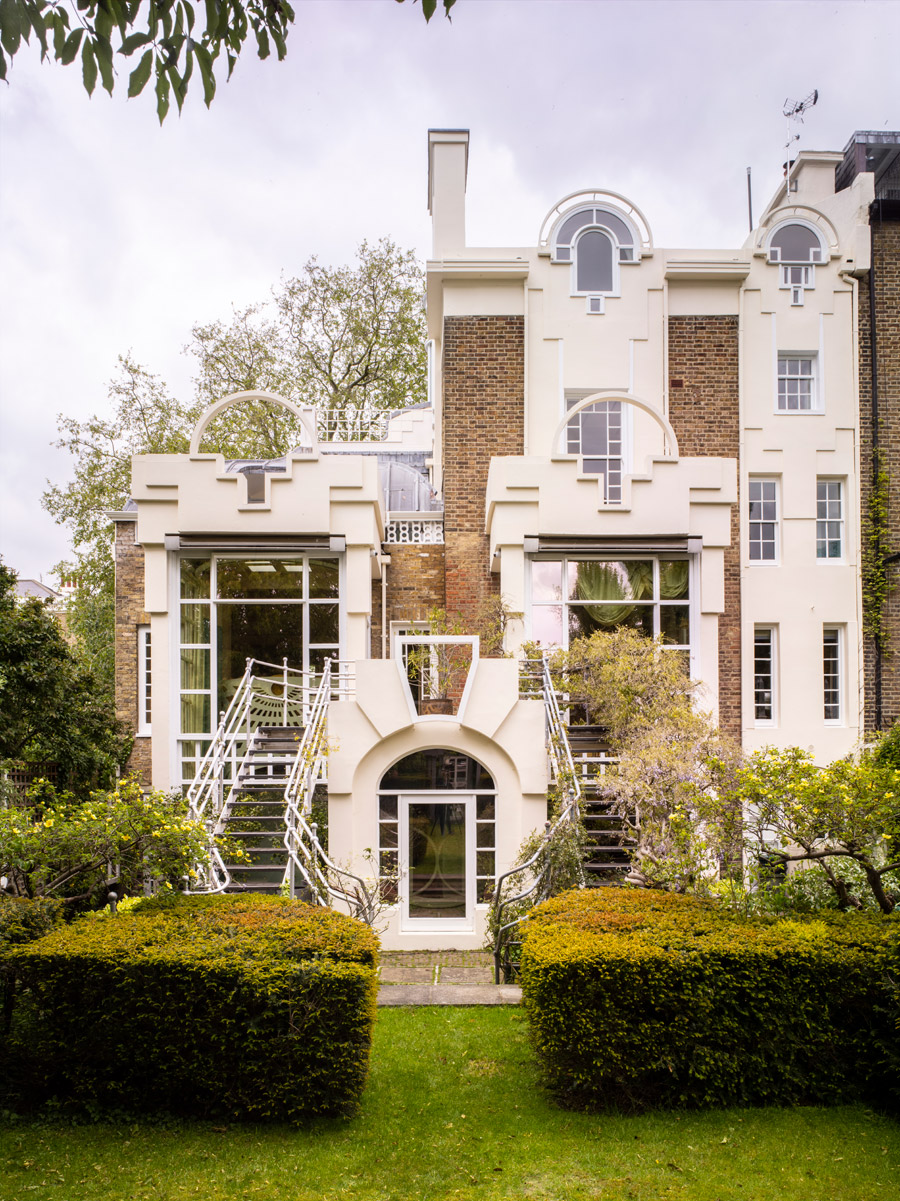 The home's Garden facade with a representation of the family of four through the repeated ‘Jencksiana’ motif around windows and terraces. Photo © Sue Barr

“He was occasionally criticized for not being serious,” says Edwin Heathcote, the architecture critic of the Financial Times who was given the title “Keeper of Meaning” for the house and foundation by Jencks before he died. “But he was very interested in talking to both the serious theoretical world and the public and jokes helped him do that.” The house is constantly playful: the jacuzzi, designed by English architect Piers Gough, is inspired by the interior of Rome’s dome of San Carlo alle Quattro Fontane by Francesco Borromini. Bookshelves in the library are designed to represent the subject of the books within: late Modernist, Postmodernist and also Historical.

It is the intention of the foundation not just to open the house to visitors but also to host seminars, exhibitions, and residencies that explore Jencks’s considerable archive. (Thousands of slides are still to be digitized). The house was a key site throughout the late 1980s and 1990s in formulating ideas about the direction of architecture as well as a place of sanctuary for an elite group of architects. Every year Jencks held a birthday party at the house for Zaha Hadid, a friend from their days at the Architectural Association. “It is very important that we keep this house as a place for debating and discussing architecture,” said Lily Jencks.