A Radical Idea in Chicago: A Biennial that Listens and Builds

By the end of the opening weekend of the 2021 Chicago Architecture Biennial (CAB) on Sunday, September 19, I’d been prayed over by parishioners of the Rock of Ages Missionary Baptist Church at 13th Street and Pulaski Road, and thanked for sharing the Good News of the West Side of Chicago’s creative vitality, as neighbors from around the block and international designers gathered to admire rammed earth walls, a ceramic kiln, and a mechanical brick extruder at one of the show’s installations. A bit later, a local rapper took the stage at a different installation nearby, and teens settled in on moveable furniture they had designed and built. A robotic turf painter, used to apply a ground mural on asphalt that doubles as a basketball court, tooled around while kids played on bright pink play equipment called “Block Party,” riddled with nooks crannies, and lookout points, designed by architect Germane Barnes, a Chicago native. (His mom was on hand to serve food.)

Far from the Chicago Cultural Center in the Loop downtown, which housed the first three editions of the Biennial, in 2015, 2017 and 2019, this year, visitors are invited deep into community networks that don’t often get attention from architects and designers. In North Lawndale on the West Side, which has suffered decades of disinvestment, neighbors and community organizations are using local open space as canvases for design, demonstrating architecture’s potential for creating change in places that need it most–and delivering a Biennial unlike any before it.

Themed “The Available City,” this Chicago biennial (running until December 18) is a landmark, appropriating vacant lots to create a new public realm based on communal care and solidarity in Black Chicago. The topic has been a long-running focus of this year’s Artistic Director, David Brown, in both his research and teaching (he is on the faculty of the University of Illinois at Chicago), and it shines a light on the shadow-double of the city’s downtown. Chicago has approximately 13,000 vacant lots, mostly clustered on the South and West Sides–an area roughly comparable to the high-end business district of The Loop. By centering on more than a dozen site-specific installations in these marginalized neighborhoods, Brown sees a chance to demonstrate “how the Biennial can actually become a participant in making the city.”

His concept discards the idea of architecture as an autonomous mode of cultural production with its own logic, language, and self-contained utility, and instead binds architecture to grassroot organizations and cedes agency to them. And when designers from all over the world and Chicago arrived in these areas long-neglected or abused by real estate development and planning processes, they were met with collaborative ingenuity, authenticity, and joy; commodities that, it must be said, are not in short supply on the South and West sides. 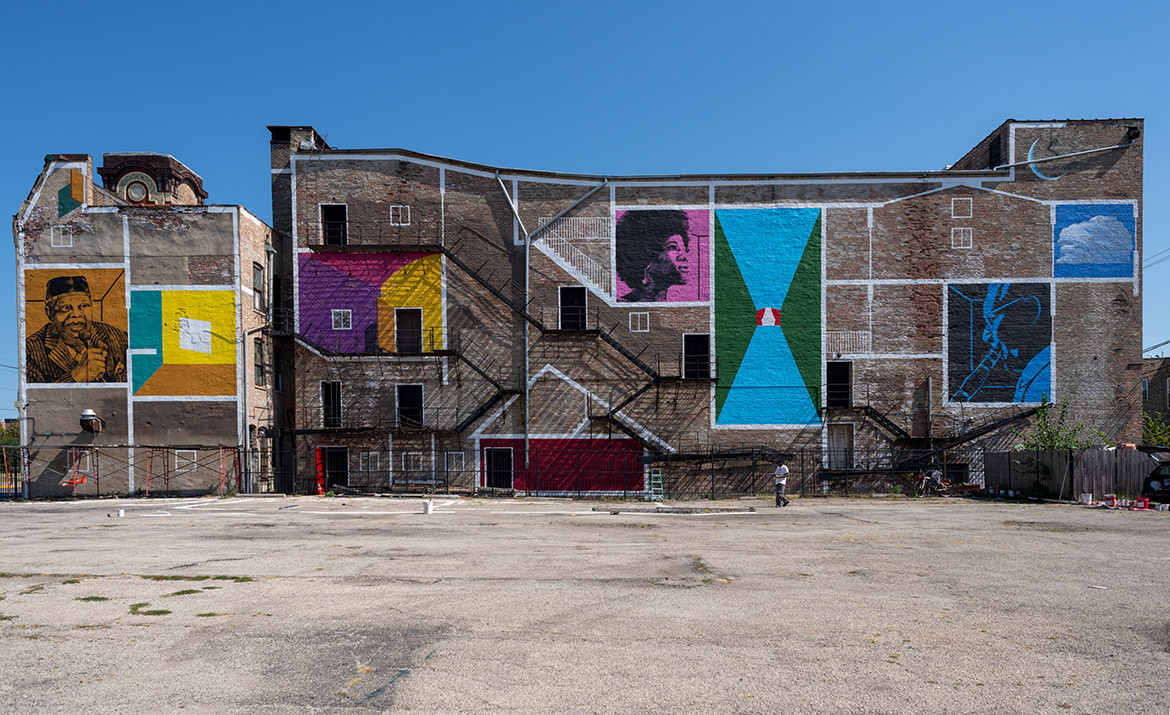 Manuel Herz’s mural "Traces of Past Futures" across the Central Park Theater for the Chicago Architecture Biennial 2021.

With its pavilions, communal gardens, and urban-scaled murals–all activated by community programming–the Biennial is animated by a central contradiction between permanence (though several installations will be on site in perpetuity) and ever-changing community input. “Our collaboration suggests a future for the site, but it’s not the future,” says Ashley Bigham of Outpost Office, whose firm designed the basketball court mural called “Cover the Grid.” “We’re turning it over to the community and it’s theirs to expand upon and change.”

Several members of the Soil Lab collective–Irish and Danish architects and designers–have been living in North Lawndale since July, working with residents to assemble an education and art space on a vacant lot. Here, Westsiders get a say in the form and programming of the site. By teaching residents to make bricks, rammed earth walls, pottery or other craftworks, and building the installation themselves with these materials, they’re creating a “community that’s made through the act of making,” says Soil Lab member James Martin.

Ongoing efforts to restore an ailing grand dame theater by the Central Park Theater Restoration Committee got a boost from Swiss architect Manuel Herz’s mural “Traces of Past Futures,” which details historical figures associated with the site and sections and plans of buildings that once surrounded the theater (partly imagined, because the blueprints have been lost). With local design partners Future Firm and Chicago preservationists, it has become a venue for community celebration, the recording of oral histories, and collective memories of North Lawndale’s prosperous past. 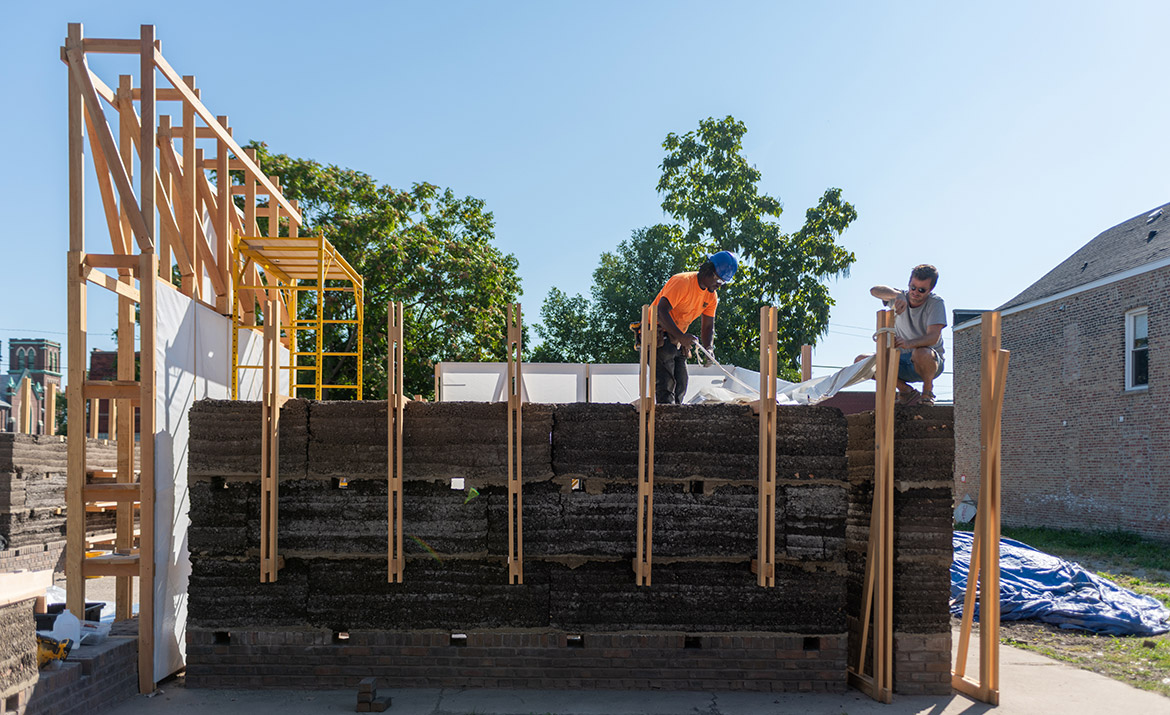 During the event, the Soil Lab collective assembles an education and art space on a vacant lot in Chicago.

At the Bronzeville Aritst Lofts, Chicago-native Toni Griffin’s “SouthSide LandNarratives” asks, “What made the available city available?”: her velvet-textured collages beautifully dramatize the deadly contest over land, space, and place in Black Chicago with imagery drawn from archival collections and contemporary art practices. Meanwhile at the Graham Foundation, “Up from the Past: Housing as Reparations on Chicago’s South Side” by Isabel Strauss of the New York-based Riff Studio traces the sometimes productive and sometimes poisonous intimacy Black Chicago has had with the city’s celebrated architectural traditions in the Bronzeville neighborhood. Through photos, drawings, and historic policy papers boosting slum clearance, the exhibit shows where the Black metropolis flourished and overlapped with sumptuous works by Frank Lloyd Wright and Adler and Sullivan. But the architect is hardly a benevolent figure here: the exhibit also depicts Mies van der Rohe’s IIT campus spreading across the South Side, where a Black neighborhood was leveled by urban renewal, and creating new layers of enclosure and exclusion.

Such installations were likely the easy part, but bringing the biennial out of the gallery and onto the vacant lots hasn’t been seamless. One community partner, In Care of Black Women, dropped out of the biennial, and in an open letter said they felt their time wasn’t valued or fairly compensated and questioned the CAB’s commitment to elevating South and West Side communities. Curators and contributors were confronted with the immense challenges of coordinating the construction of multiple projects during a pandemic, with less than a year to plan while material prices skyrocketed. By opening weekend, several site-based installations weren’t finished.

It’s an open question, but not an important one, whether the international design cognoscenti that normally populates these events make it out to 13th and Pulaski. The success or failure of a community garden here has far fewer consequences for them than for residents. By the biennial’s own mandate, success means lasting connections for the community.

Because it operates at an architectural timescale, the worth of this biennial won’t be known for months or years. Brown’s implicit question, “Can design exhibitions put material interventions where they’re needed?” is really a proxy for “How can architecture put material interventions where they’re needed?” In full view of the dissolution (and resilience) of the South and West sides of Chicago, it’s a powerful, transgressive prompt. Brown and the CAB have done what they can to make it un-ignorable. But it’s up to everyone else to answer.