At 58 feet high, 1 De Haro—a 134,000 square foot office and light-manufacturing building completed earlier this year in San Francisco’s design district—is hardly the country’s tallest mass timber structure, but it is a first for the city. According to its architects Perkins&Will and the developer, SKS Partners, 1 De Haro is San Francisco’s first multi-story building made out of the material. And there could soon be many more, since California recently approved the tall wood provisions of the 2021 International Building Code (IBC), which allow mass timber buildings of up to 18 stories. The state is one of nine jurisdictions to adopt the standards so far.

Wrapped in a glass curtain wall, and with a triangular footprint, 1 De Haro is comprised of three stories of exposed glulam columns and beams, and cross-laminated timber (CLT) floor slabs, on top of a concrete podium. The resulting structure’s embodied carbon—the greenhouse emissions associated with manufacture of its materials—is about 15 percent less than one of concrete, say the architects. And that is without taking into account the carbon sequestering properties of wood. (Including this biogenic carbon, the savings would be 51 percent, according to Perkins&Will’s calculations). 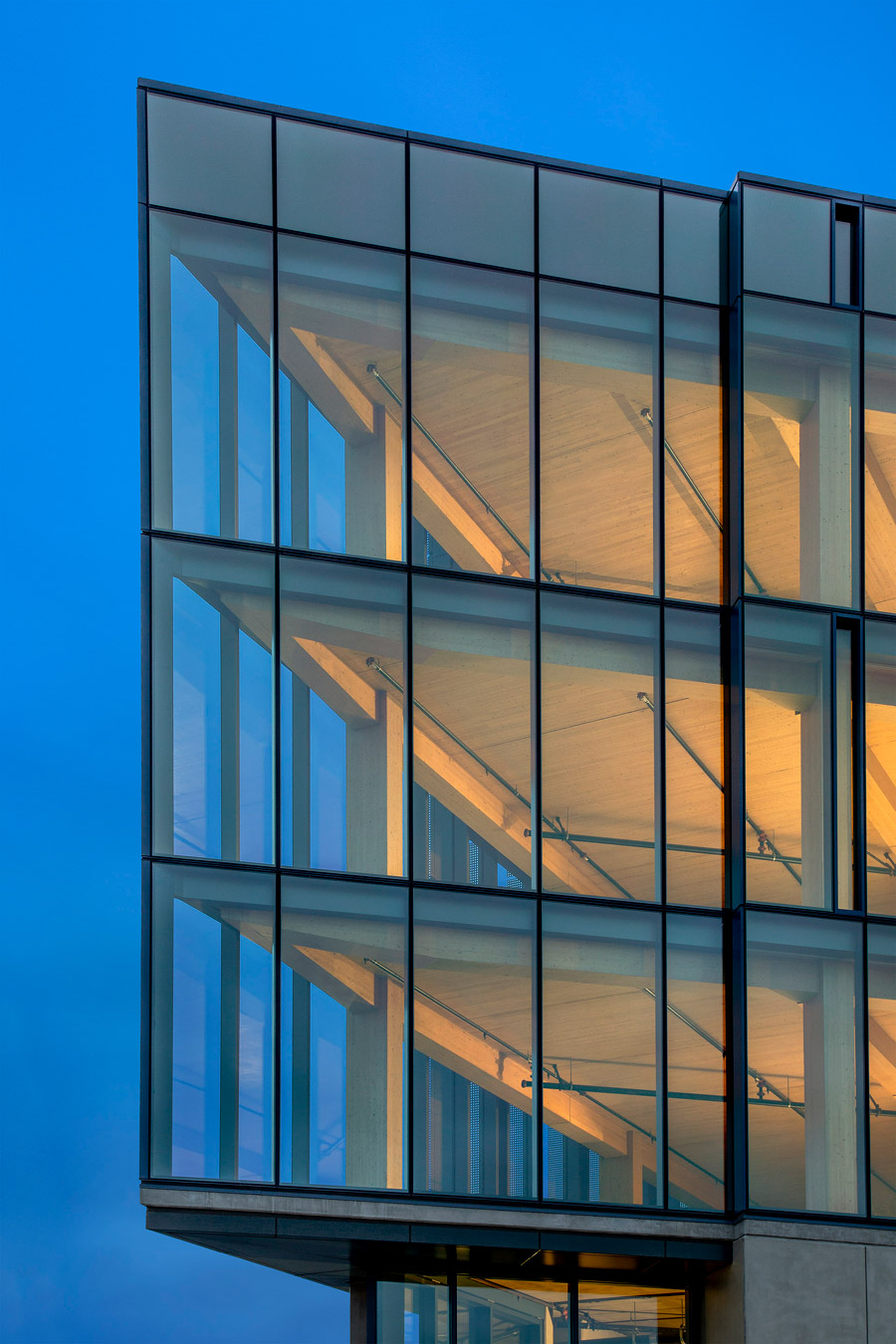 The mass timber is especially visible through the curtain wall when the building is illuminated from within at night.

The project team began to seriously consider glulam and CLT early on, not only for the impressive greenhouse gas reductions, but also due to the site’s soft soil conditions. The timber assembly is about 30 percent lighter than comparable concrete system, which translated into fewer piles, and therefore meant a less expensive foundation system. There were time savings as well: the wood was harvested from Forest Stewardship Council-certified forests in northern Quebec, and then fabricated into the required components, before being transported to the Bay Area by rail. The tight dimensional tolerances of the timber elements—within 1/16-inch—allowed the structure to be assembled quickly. Up to 10,000 square feet were erected per day, “which is incredible,” says Matt Covall, a Perkins&Will senior project manager. The precision also lends the connections of the timber frame—largely exposed on the interior—a “crisp and studied” appearance, adds Peter Pfau, the firm’s design director.

Because 1 De Haro was designed prior to the adoption of the new IBC wood standards, the architects had to work especially closely with consultants, manufacturers, and officials to satisfy engineering requirements, including those for earthquakes and fire. To address seismic forces, the frame includes steel buckling-restrained braces. For firestopping, between the structure and the cladding, for instance, details were developed in collaboration with the local fire department. The building is also fully sprinklered. 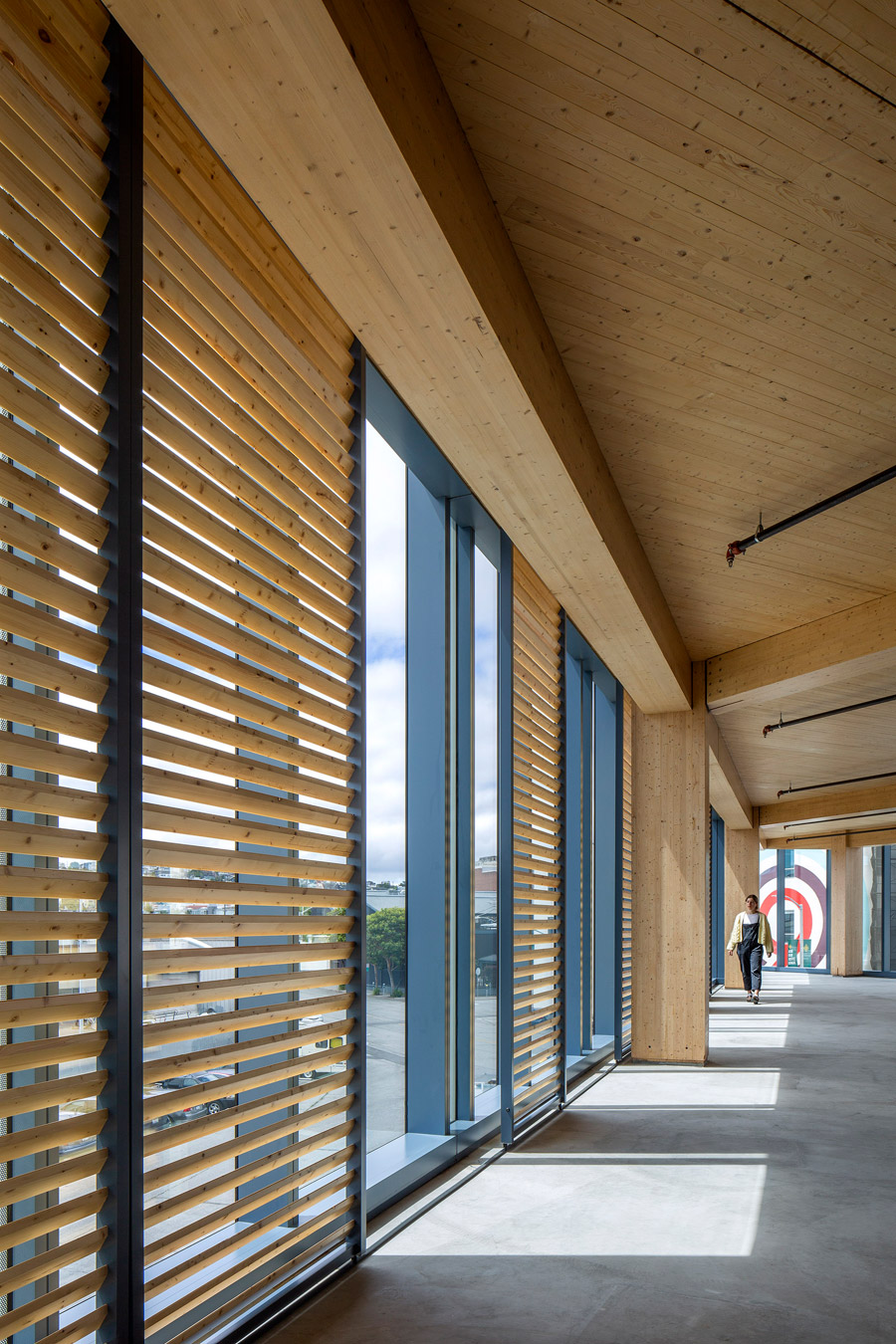 Interior sunshade elements, like the office-floor framing, are made of mass timber.

Mass timber is more expensive than concrete and steel, though here the cost differential was narrowed with savings in the foundations and the shorter construction timeline, says Dan Kingsley, SKS managing partner. In addition, he says, 1 De Haro—with its ground floor light industrial space and exposed warm timber frame for the upper stories—was able to command an above-market rent, with the entire building leased to a single company that designs, prototypes, and manufactures sensors. Kingsley says the development community should take mass timber seriously: “It produces a better building with better return on investment.”

Currently, the country’s tallest mass-timber structure is Carbon12, an 85-foot-tall, 14-unit condominium in Portland, Oregon, designed by Kaiser+Path and completed in 2017. But that is soon to be surpassed by Korb + Associates Architects’ Ascent, a 25-story apartment building under construction in Milwaukee and slated for completion next year.

A Hybrid Approach: Combining Mass Timber with Steel and Concrete