One of the most acclaimed buildings of the 20th century, Berlin’s Neue Nationalgalerie (NNG), completed in 1968 by Ludwig Mies van der Rohe, reopened in late August after a six-year renovation by the British architect David Chipperfield. The black steel roof, glass hall, and granite base once again display their stark, unmitigated materiality, while the structure and mechanical systems have been substantially refurbished. “Seeing behind its exterior has revealed both its genius and its flaws, but overall it has only deepened my admiration for Mies’s vision,” says Chipperfield. 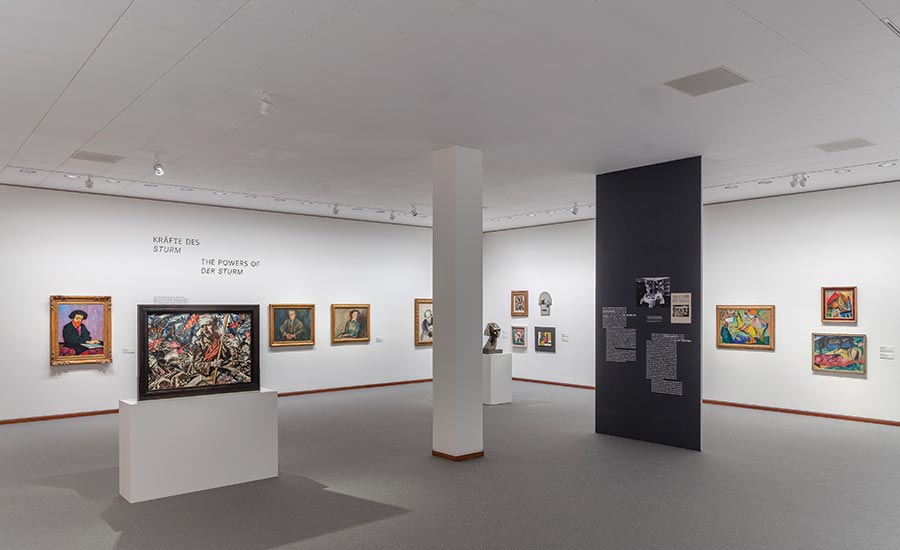 Whereas the Neue Nationalgalerie embodies the Miesian ideal— the articulation of form, structure, and detail in the service of a distinct architectural concept—it also displays its failings, such as the design of the main hall, a well-proportioned, glazed exhibition space void of sun protection. The glass facades cracked and were disfigured by condensation, a vivid demonstration of how aesthetic choices trumped quotidian demands.

Because so many of Berlin’s cultural institutions are located in the eastern part of the city, they came under Soviet control at the war’s end in 1945. To compensate, West Berlin, overseen by the Americans, French, and British, established the Kulturforum, an arts district south of the Berlin Wall. The Neue Nationalgalerie, displaying 20th-century art, along with the Philharmonie (1963) and State Library (1967–78), both by Hans Scharoun, were erected there. Since the late 1980s, other notable architecture has arisen around this site, including the Wissen­schaftszentrum Berlin by James Stirling (1987) and the Potsdamerplatz development, with contributions by Arata Isozaki, Helmut Jahn, Raphael Moneo, Renzo Piano, Richard Rogers, and others. Now in construction, the Museum of the 20th Century, by Herzog & de Meuron, will open in 2026 directly north of the NNG.

Elegant materials are refurbished in the street-level lobby (1); the stair (2) takes viewers down to the galleries (3). Photos © Simon Menges (1 & 2), David Von Becker (3) 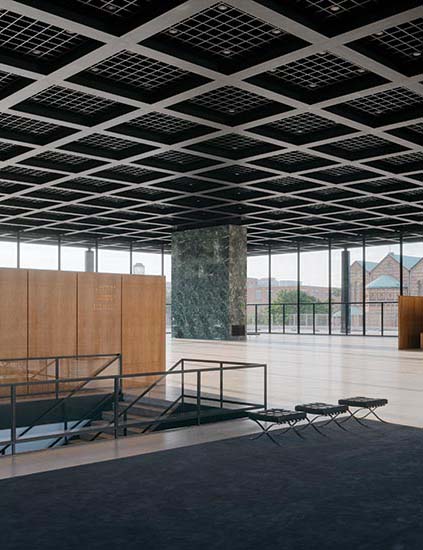 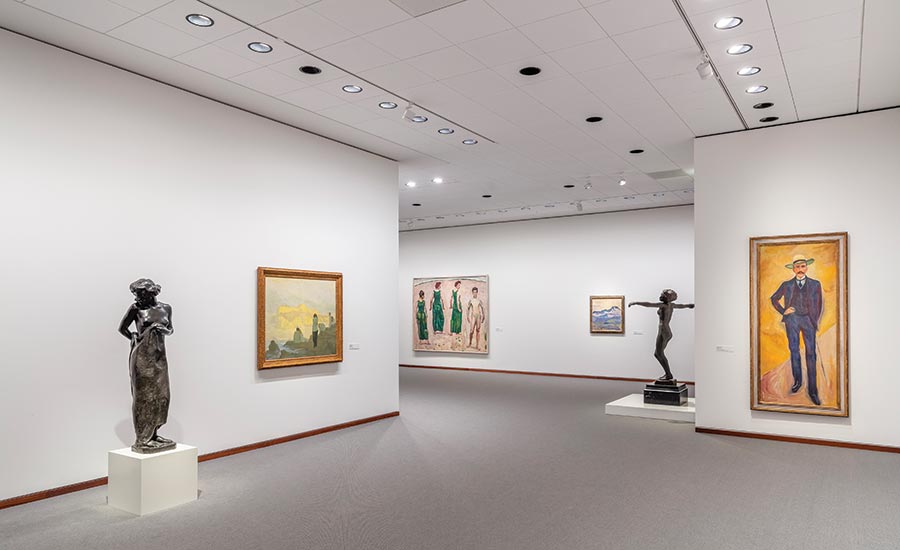 Initially critical of NNG’s bare-bones appearance, West Berliners eventually warmed to its diverse cultural offerings, from jazz in the garden to blockbuster exhibitions. After 1989, when the wall came down and Berlin turned into a magnet for international tourists, an estimated 300,000 people per year visited Mies’s museum. Yet by the time of its designation as a historic monument in 1995, the building was showing serious signs of aging. In 2011, an open, two-stage European-wide process was undertaken to select an architect for a thorough renovation. An international jury chose Chipperfield over 24 competitors, citing the firm’s desire to remain “invisible” while restoring Mies’s architecture. The firm’s earlier success with the restoration of the 19th-century Neues Museum, on Berlin’s Museum Island, helped, as did its ability to involve the stakeholders—clients, users, municipal authorities, consultants, and technical experts—in the decision-making.

Adopting the strategy “as much Mies as possible,” the client and the architects followed local preservation practices to protect the aura of the original building. Accordingly, all visible surfaces—the emerald-green Tinos marble, pale gray Silesian granite, honey-toned English oak, and matte black-painted steel—were retained and repaired, their patina intact. Damaged pieces were only replaced when necessary. For the refurbishing, restorers relied on original techniques, such as hand-painting metal surfaces. For the less durable finishes, new versions were fabricated for the bouclé woven salt-and-pepper wool carpeting on the lower-level galleries and the diaphanous dove-gray wool curtains lining the glass hall, as well as for the deep-brown leather cushions of Barcelona chairs and stools.

Concealed components, such as the building systems, were completely overhauled, and hazardous materials eliminated. When the firm removed the granite cladding to insert new waterproofing and insulation, it found the underlying reinforced concrete to be of poor quality, a circumstance of West Berlin’s limited resources in the 1960s. That led to the team’s extensively renewing the structure. 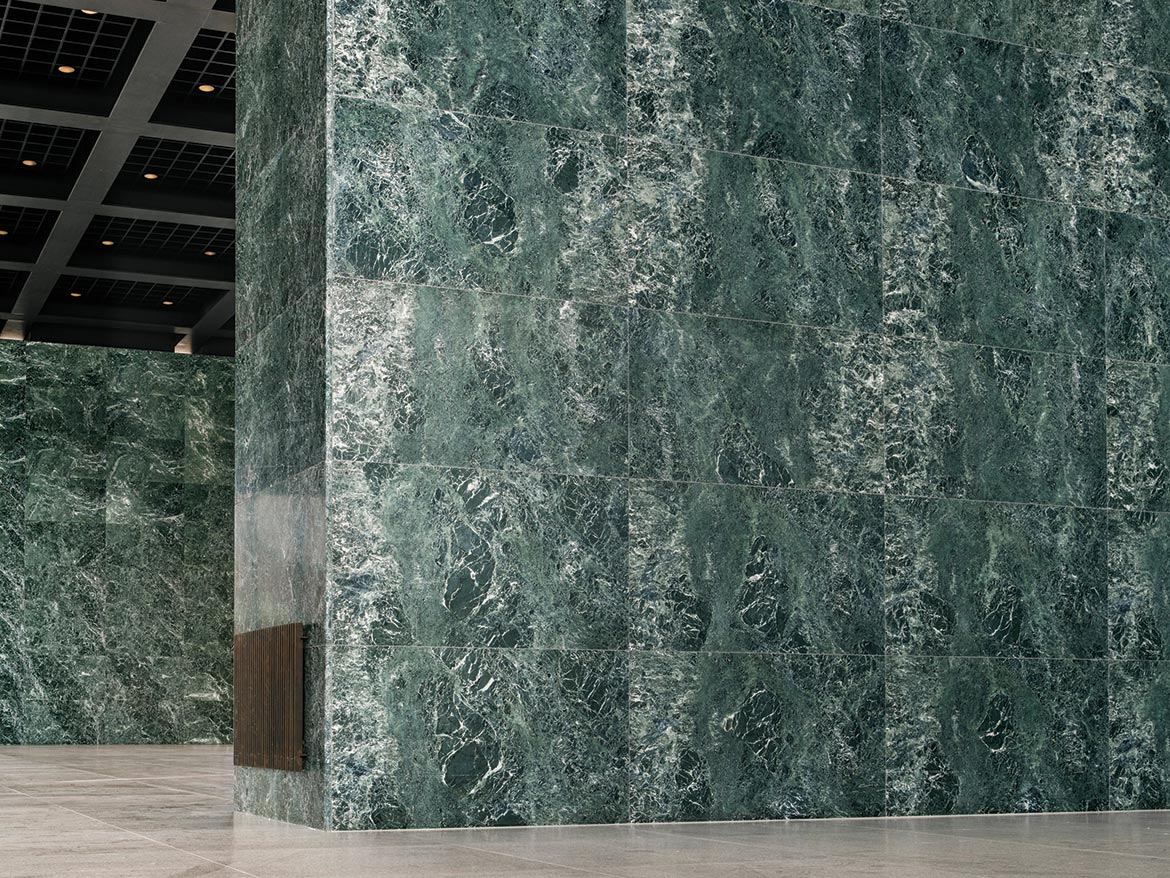 For Chipperfield, the building’s three parts—the glass hall, the plinth, the garden—fulfill the complex demands of a museum. But it is the glass hall, or temple, planned as a monumental gesture in affirmation of new public institutions in the aftermath of war, that has special meaning. It is “an incredibly optimistic utopian stage,” he says, where civic life can unfold. Yet because its relentless glazing and technical defects have been a bane to curators, alterations had to balance the building performance with the preservation of the construction’s delicate appearance. The architects adroitly inserted expansion joints along the facade, and installed two-layered laminated white security glass, necessitating 5 millimeters (3/16 inch) to be lasered off the mullions to receive the thicker panes. During the winter months, warm air will blow upward from a floor grate along the inside of the glass to moderate the interior climate and to lessen—but not eliminate—moisture buildup, which will be captured in a new floor drain.

Some visible changes were inevitable. Although a passenger elevator is tucked into the upper-level north cloakroom, a granite-clad ramp for accessibility now runs along the staircase at the base’s southeast corner, upsetting the rotational symmetry of the building’s plan. (The northwest staircase at the opposite corner remains intact.) On the lower level, two former storage areas were repurposed for the bookstore and cloakroom. Here “we did not want to make a Miesian space,” says Chipperfield. To underscore the secondary status of these “infrastructural” areas, the architects exposed the reinforced-concrete structure and coffered ceiling but selected materials present in the building, such as English oak and matte black-painted steel for the detailing and cabinetry. 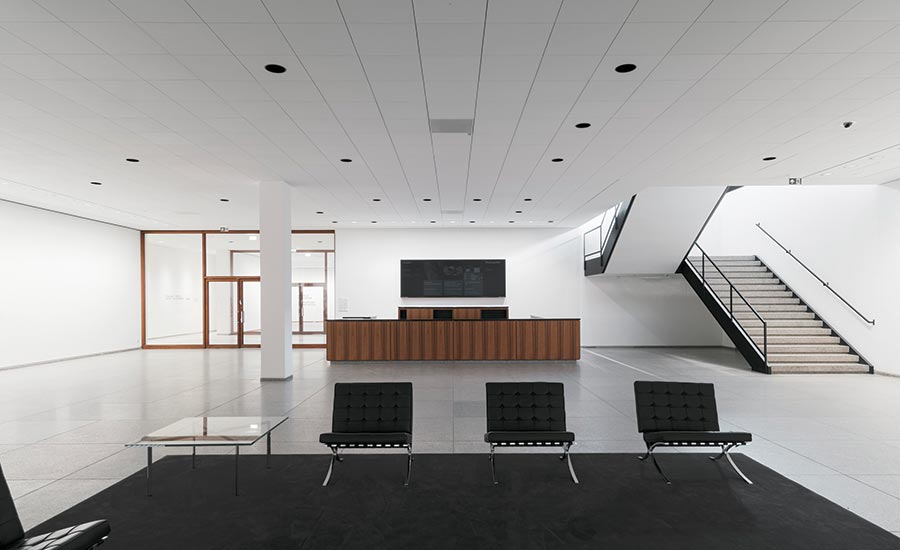 On the lower level is a lobby (4) and the cloakroom (5). Photos © Simon Menges 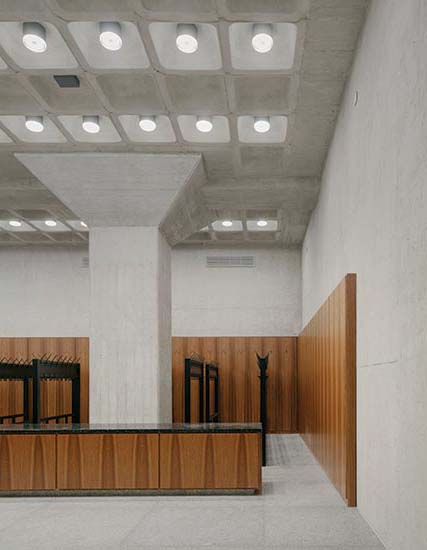 In another gesture to counteract the ubiquity of the white walls, the museum commissioned artist Jorge Pardo to create a site-specific installation for the small windowless café. Featuring densely patterned orange-tone laser-cut MDF wall tiles and stepped aluminum luminaires, the café, both an autonomous artwork and place for daily activity, is meant to evoke the approach of Lilly Reich, Mies’s collaborator and exhibition designer.

At the rear garden, where tree roots had badly dislodged the granite paving, new planting, along with benches and a fountain, create loosely defined zones to display 20 sculptures. 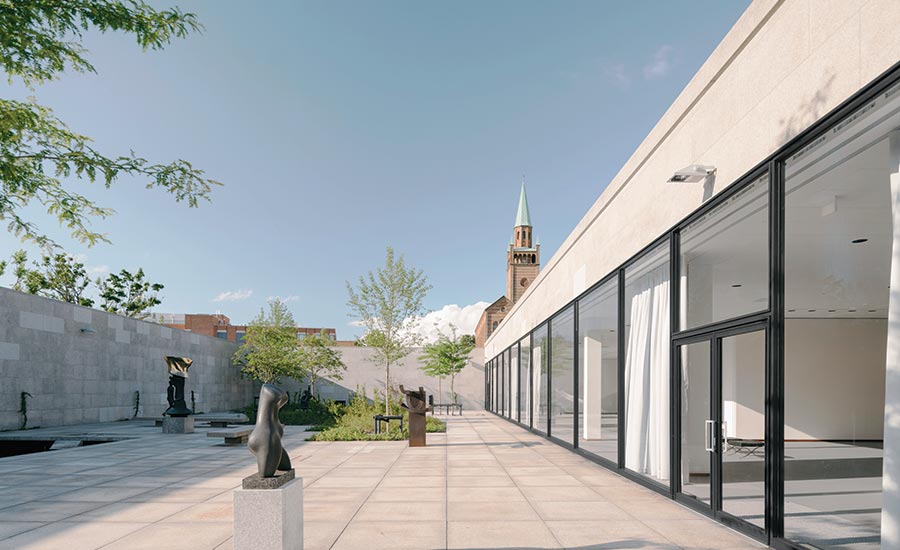 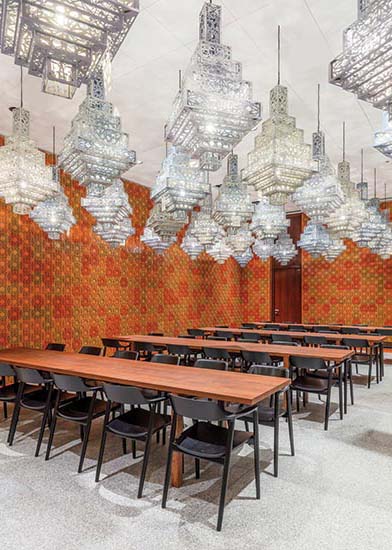 For those who experienced the Neue Nationalgalerie prior to 2015, the restored building is a revelation, and a tribute to Mies’s enduring aesthetic. “It survives,” says Chipperfield, “because it is a beautiful building.” As for utility, he adds, “function changes over time.”

Nevertheless, these recent modifications—in addition to the briskly transforming context—do alter the perception of this landmark. No longer a Cold War outpost, it bears witness to Berlin’s turbulent past while holding its own amid a sea of architectural statements. It is well equipped for a new chapter of intense public engagement. 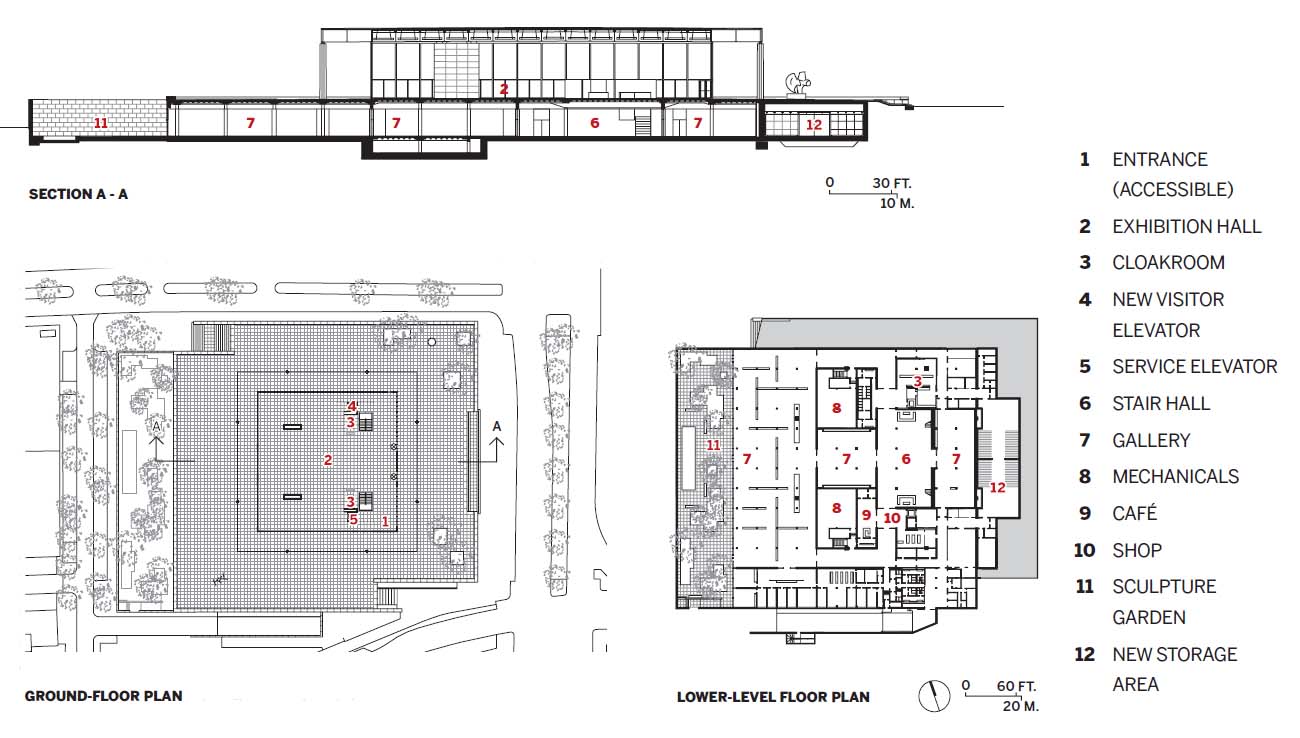