Edited by David A. Hanks

In its May 1902 issue (PDF page 126), under the heading “L’Art Nouveau,” Architectural Record promised to “publish a number of articles illustrating the recent architectural, sculptural, decorative, and metallic work” that exemplified “the so-called ‘new art.’ ” And how new that art must indeed have seemed in comparison to the dark, overwrought, and historicizing Lexington Avenue house of Mr. Henry W. Poor, realized for him by McKim, Mead & White and featured in the same issue. What a contrast were the frank expression of materials and sinuous vegetal lines of Hector Guimard’s Humbert de Romans concert hall in Paris, completed a year earlier and the subject of the first article in the series. Among those that followed was “An Architect’s Opinion of ‘l’Art Nouveau,’ ” written by the 35-year-old Guimard himself, in which the Frenchman informed his American confrères that if any place was ripe for the creation of a “new art,” it was the U.S. 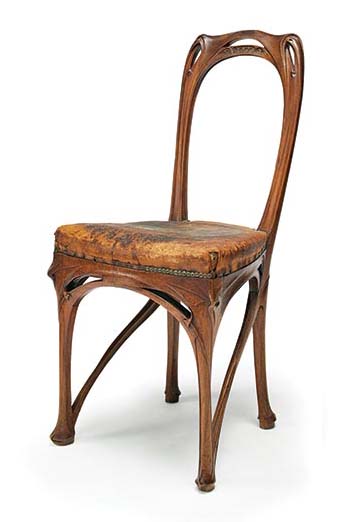 Perhaps partly thanks to RECORD, 119 years later, Guimard (1867–1942) is by far the best known of the Art Nouveau architects (unless you count Gaudí), and is currently the subject of a retrospective exhibition and catalogue jointly produced by the Richard H. Driehaus Museum in Chicago and the Cooper Hewitt, Smithsonian Design Museum in New York. His reputation has waxed and waned and waxed again over the past century, but these essays newly examining his life and oeuvre—the first such in 50 years in the U.S.—break limited new ground if the catalogue, edited by curator David A. Hanks, is anything to go by. The well-worn tale of Guimard’s early admiration for Viollet-le-Duc, his fateful 1895 meeting with Victor Horta, and the 1898 completion of the startling Castel Béranger is told again for a contemporary audience, but there is little that sets him in his wider context. Much is made, for example, of Guimard’s self-promotion through postcards, but there is no attempt to link his entrepreneurship to the graphic-art boom that marked the era and became a major trope of Art Nouveau; the prewar Guimard, having trained first at the École des Arts Décoratifs, was as much an interior designer as an architect (he was a founding member of the Salon des Artistes Décorateurs), but that side of his work is little analyzed and the obvious links to the French Rococo passed over in silence; neither, despite an emphasis on the stylistic aspect of his architecture, is there discussion of the Flamboyant Gothic, whose influence is clearly felt in his mid-career work, nor are his interwar attempts to keep up with changing fashion—working solely in the private sector, he had no choice but to follow the market—explored in any depth. Moreover, recent scholarship on the Symbolist reach of Guimard’s designs is entirely ignored.

Some essays, nonetheless, advance our understanding of the man and his career. Georges Vigne, for example, dissects Guimard’s product lines and his manufacturing arrangements; Sarah D. Coffin (with help from the work of Bruno Montamat) offers a glimpse of Guimard’s marriage to the American Adeline Oppenheim, whose wealth, connections, and commitment to his total-art tendencies were instrumental in his prewar success and posthumous reputation; and Barry Bergdoll examines Guimard’s patented prefabricated building system, developed in response to the post–World War I housing shortage, which stood out for its low-tech approach, intended to make it usable by anyone anywhere. In this way, Guimard embodied the divergent tendencies of his time and place, on the one hand producing the precious, artisanal, and unique of French tradition, and on the other seeking to harness art and industry for the benefit of all.